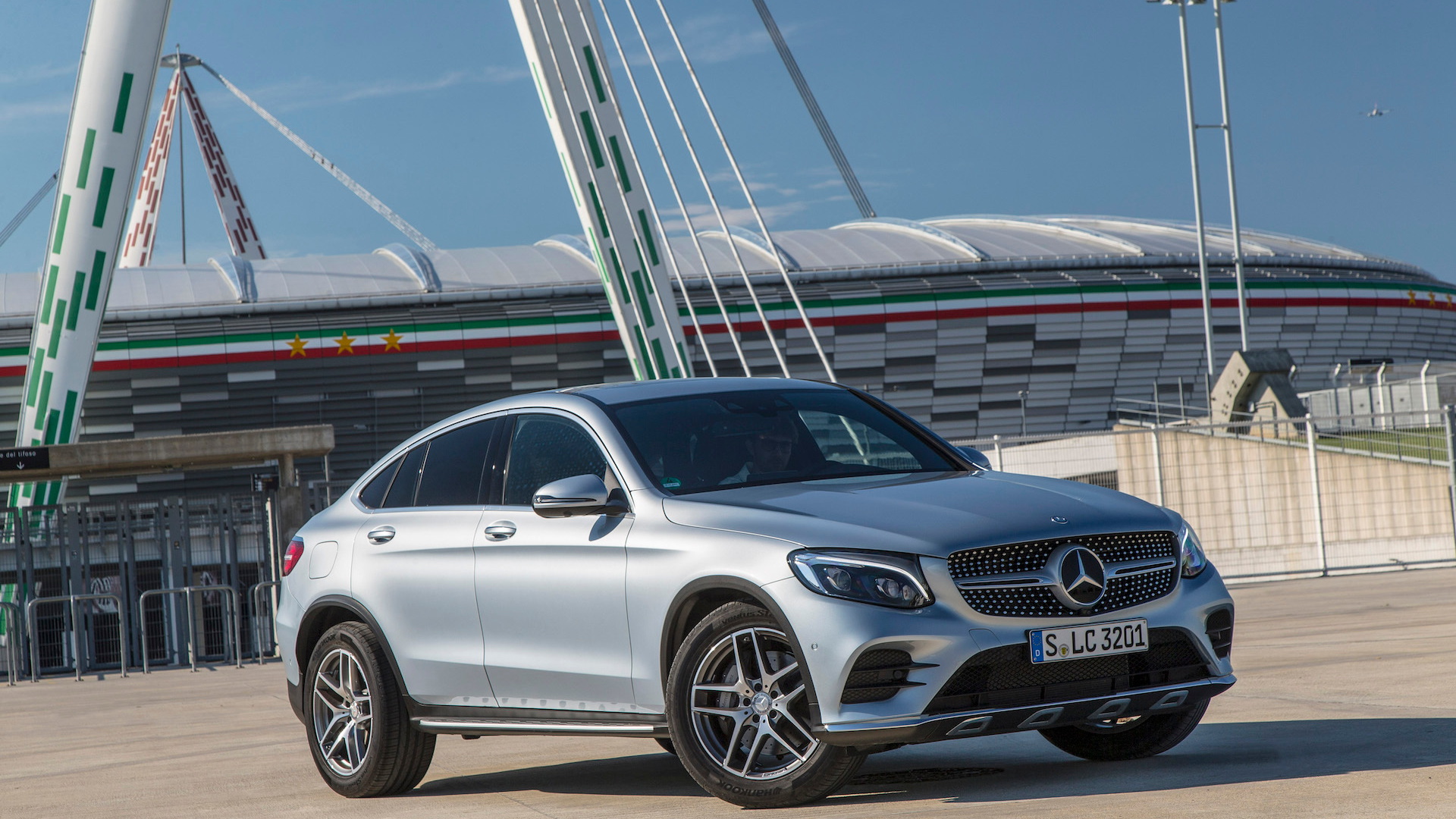 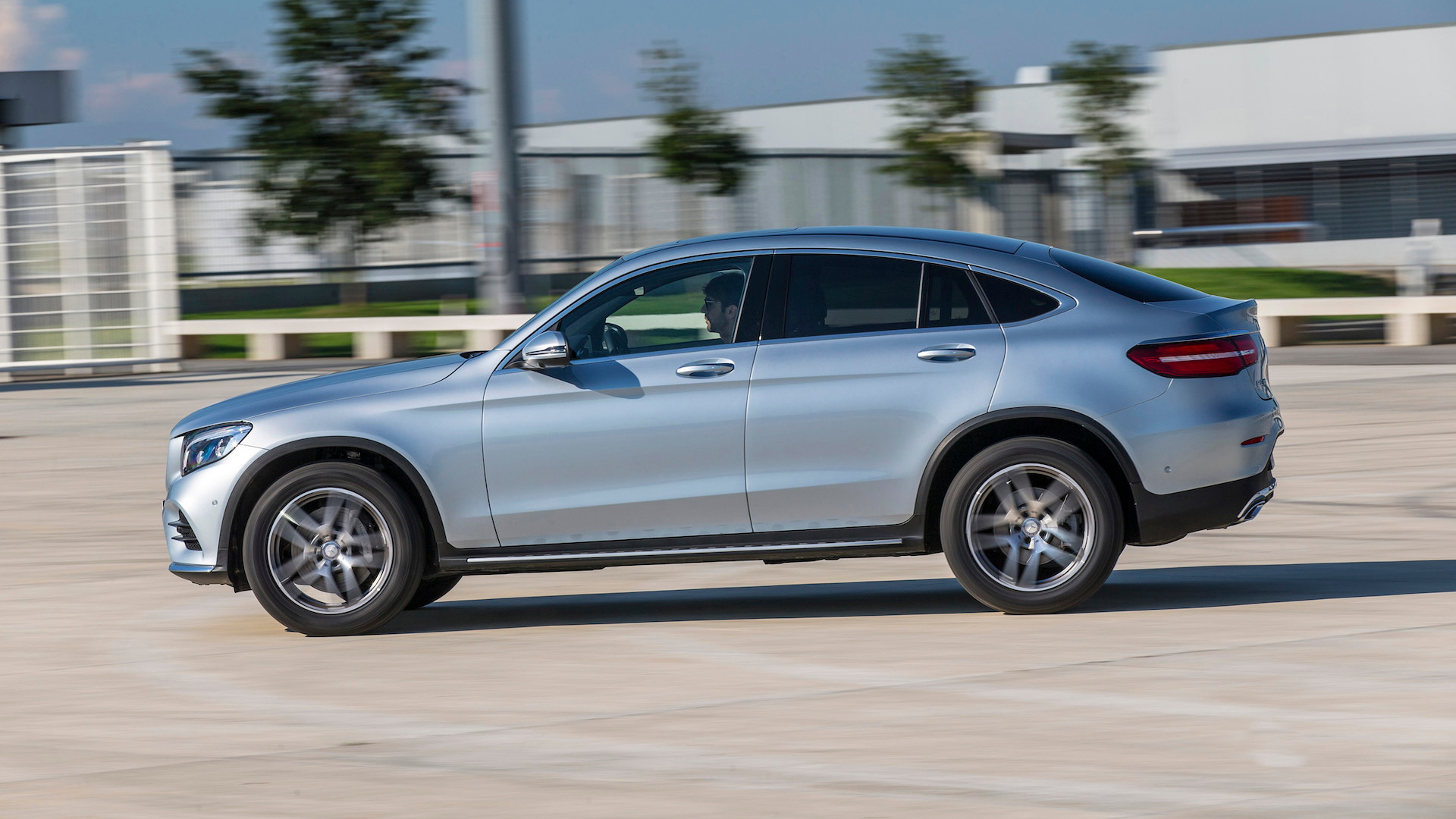 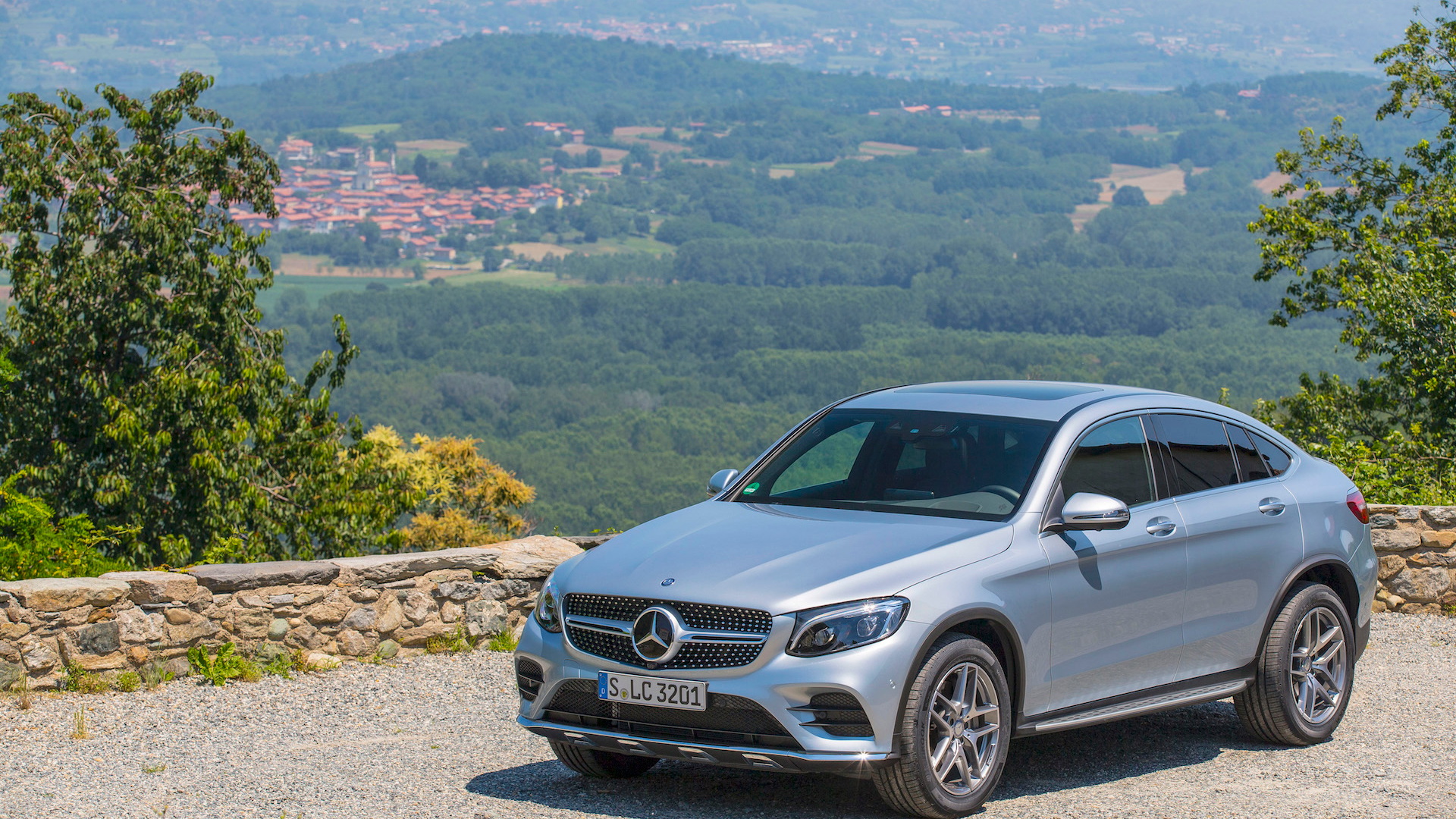 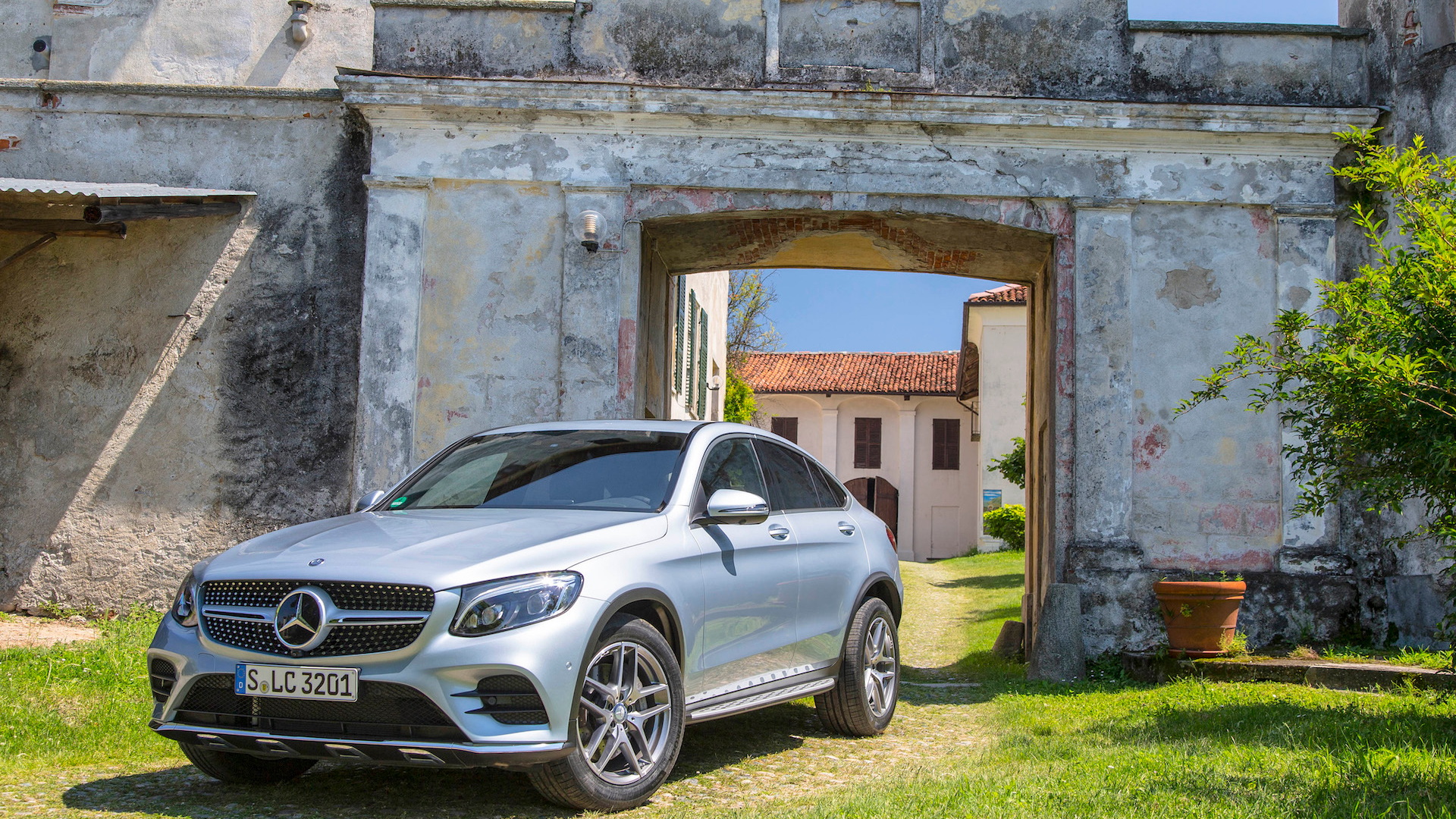 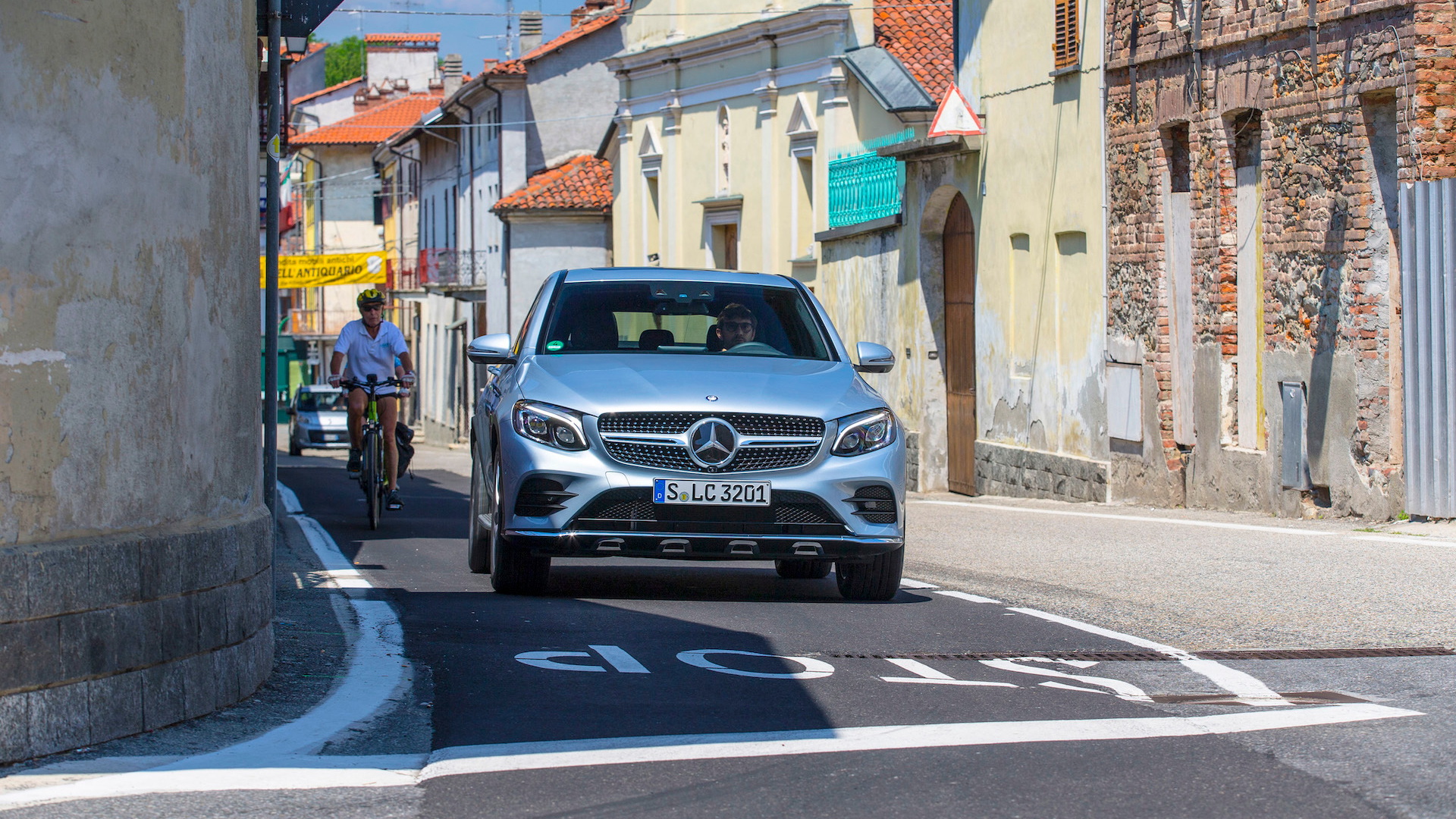 You know that thing where we're calling things coupes, when they're not? Lay that at the feet of Mercedes-Benz.

Back in 2006, Benz started the "four-door coupe" trend with the original CLS-Class sedan. Things quickly got out of hand. All sorts of brands, from Land Rover to Mazda, started using "coupe-like" to describe the sleek styling themes of new vehicles.

Then BMW went nuclear by applying "coupe" to SUVs, when it christened the X6 and X4.

This year, the whole trend swallows its own tail. Mercedes-Benz is going after the X4 with a compact companion to its GLC-Class SUV, in the form of the GLC Coupe.

Just a refresher on what coupes are: shorter, two-door hardtop versions of sedans.

Even though it is most assuredly not a coupe, the GLC300 Coupe is what the Chopped judges would call nicely composed. It pitches the same style/substance trade-off as BMW's sex-UVs,  with a better balanced shape and a more relaxed road feel.

I drove the GLC Coupe in Italy last week, with the Matterhorn looming in the background, stunning alpine vistas serving as set dressing--and nary a real coupe in sight.

Let's not make too much of the whole coupe, though. It just means a better-looking, less roomy version of the GLC. It's at least a better design trade-off than the one made by the X4. Let's even go so far to say the GLC Coupe is the best-looking coupe-like SUV so far.

Of course, the GLC Coupe closely resembles the GLE Coupe, but more than a few of the writers gathered for this first drive agreed that the GLC does a better job fending off its BMW rival than the GLE does.

Most of the shape ahead of the front doors is common to the standard GLC, save for a grille with only a single blade and wide, straked air intakes. The glass sits a bit more upright on the Coupe, but the roofline starts its taper right over the driver's head, and it doesn't stop until it hits the rear fenders just ahead of the tail.

Elaborate details gloss over any rugged intentions the GLC Coupe might ever have. It's impossible to imagine the available perforated step rails in an off-roading scenario when they look more like a Hugo Boss sample sale.

Where it bests the BMW is in the balance of styling elements down the side. The Benz's roofline is lower, the roofline falls more gracefully, and the glass sits far enough off the tail to create the illusion of a short decklid, just enough to play up the "coupe" aspect. The GLC's surfacing is softer, and the wheelbase is long enough to play out the shape, where the X4 appears a bit more stubby and angular.

The GLC Coupe's cabin is more of the same soothing, stylish stuff found in the latest generation of Mercedes cars. It's clearly drawn from the latest C-Class and GLC, with the low dash intersecting a wide center console, the center stack banded by a row of round vents.

A sport trim package fits the cabin with a flat-bottom steering wheel, studded pedals and AMG floormats. Trimmed in metal, wood, and leather, the cabin's one flaw is the infotainment display that rests on the dash with the aplomb of a mid-priced hotel's flat-screen TV.

Though it'll be available in GLC43 AMG and eventually a GLC63 AMG version, I drove the version closest to what we'll see here in the U.S--a GLC300 Coupe with all-wheel drive and a turbocharged 4-cylinder.

It's close but not identical: my car was tuned to European ride-height standard, while U.S. versions will ride a few inches higher, mostly to conform to EPA truck-classification rules. My impressions of handling were generally good, but they're bound to change with ride height and tire specifications distinct to American versions.

Hustling through Italy's Aosta Valley is no easy task for an SUV, but the GLC Coupe turns it into easy work. Oxygen is thin, the roads are narrow, the drop-offs are huge, the elevation changes are spectacular, and the GLC Coupe doesn't feel like a clumsy utility vehicle.

It's no AMG GT, either, but with its frisky drivetrain and quickened steering, the GLC Coupe softens our stance on the C-word, at least a little.

The core of the Mercedes lineup these days is its latest 2.0-liter turbocharged inline-4. Here it's good for the same 241 horsepower and 273 pound-feet of torque it makes in the GLC, C-Class, and the new E-Class. It has all the torque accessible at a diesel-like 1,300 rpm, and hooks up well with the 9-speed automatic.

Acceleration, by the seat of the pants, is mid-7s strong, via an all-wheel-drive system with a 45:55 torque split front to rear. The powertrain is responsive and gutsy, and the 9-speed doesn't rummage around through its gears as much as we've found in other 9-speed applications. But the GLC Coupe's 4-cylinder is gruff under full throttle, and the stop/start that helps it save fuel can restart the SUV abruptly.

Playing with the rocker switches on the gorgeous console yields some useful alternatives. The transmission and throttle can be spun from Eco to Comfort, Sport, Sport+, and Individual modes. Sport+ cracks the whip on shift speed and throttle, turning the paddle shift controls into useful little cattle prods, while Eco mode lightens the consumption by letting the car coast briefly.

The EPA hasn't yet rated the GLC300 Coupe, but last year's equivalent GLC was pegged at 21 mpg city, 28 highway, and 24 combined.

With quick steering and absorbent ride, the Euro-spec GLC Coupe handles better than it probably has to, to justify its boutique shape.

The basics are common to the GLC. Mercedes will sell the Coupe with either a conventional multi-link independent suspension and adaptive dampers, or an air suspension with adaptive dampers that can lower the Coupe by about a half-inch at highway speeds for better handling and fuel economy, or more (up to 1.6 inches) for easier loading of cargo.

We've driven the air-suspension GLC wagon, and found it rode with a calm, flat composure that almost removed too much of the information gleaned from body roll.

In the Coupe, I spent two half-days in vehicles fitted with summer tires and the steel suspension, as well as the quicker steering rack that differentiates the Coupe from the wagon (with a ratio of 15:1, versus 16:1 in the GLC wagon).

The Coupe doesn't have much steering feedback, like its wagon counterpart. Even big wheels and summer tires don't produce the kind of judder and patter that pinpoint the wheels' precise location on the road. It's tuned to be isolated, but the GLC Coupe still has good weight in its more sporty driving modes, and tracks well on center.

The sport suspension doesn't betray the fact that this is a Mercedes, and by nature, it's more compliant than a comparable BMW. There's a suppleness that's complemented by softly upholstered seats and lots of sound deadening, to mute the driving experience in the right ways without isolating it entirely.

Yes, it's a lifted and raised hatchback with all-wheel drive, but the GLC Coupe blurs the body-style distinctions even more as I get higher and higher into a grey area above the tree line, somewhere in a three-country pile-up. It's light on its feet, dips down two or three gears on command, and complies willingly when you want to chase some Puntos and Citroens up a skinny sheep trail.

I'm not mad at all about the way the GLC Coupe's roofline cuts down on the cargo hold. It's not as useful as the wagon, sure, but like the X4, the Coupe still has decent passenger space, and enough of a cargo hold to bring four people and their roll-aboards on a long weekend trip. If you believe the stock photos above, it can even hold a skateboard, which makes me think the photographer had really low expectations.

The GLC Coupe actually is longer than the wagon, but it's all for appearances, and doesn't improve on interior space in knee room or leg room. Since the GLC Coupe's roofline is lower overall, it should come as no surprise that the headliner in the back seat dips down just behind passengers' heads, and will touch the pates of taller riders in a way the wagon's headliner would not.

The slimmer space is more in evidence when you power open the tailgate and try on the shallower cargo hold for size. Or when you attempt to read traffic over your shoulder: Vision to the rear quarters is not good, which is why the available surround-view camera is such a necessity.

Prices for features like that, and base sticker, haven't been published yet, but the GLC Coupe will come standard with all-wheel drive and a steel suspension, as well as 19-inch wheels, a power tailgate, a multimedia interface, a rearview camera, pushbutton start, and man-made upholstery. The drive-mode selector is also standard, along with a sunroof, a power driver seat, and power-folding mirrors.

Major options will include adaptive cruise control with lane-keep assist, blind-spot monitors, and adaptive cruise control; ventilated and heated front seats; an upholstered dash; heated rear seats; ambient lighting; a head-up display; the air suspension; and an 8.4-inch infotainment display with navigation and a touchpad for inputs.
The GLC Coupe will go on sale right at the end of a year or the beginning of one, depending on how you look at things. Call it a tall, lively Coupe with all-wheel drive, or just consider it a streamlined SUV with its styling priorities in order--again, it's all in how you look at things.