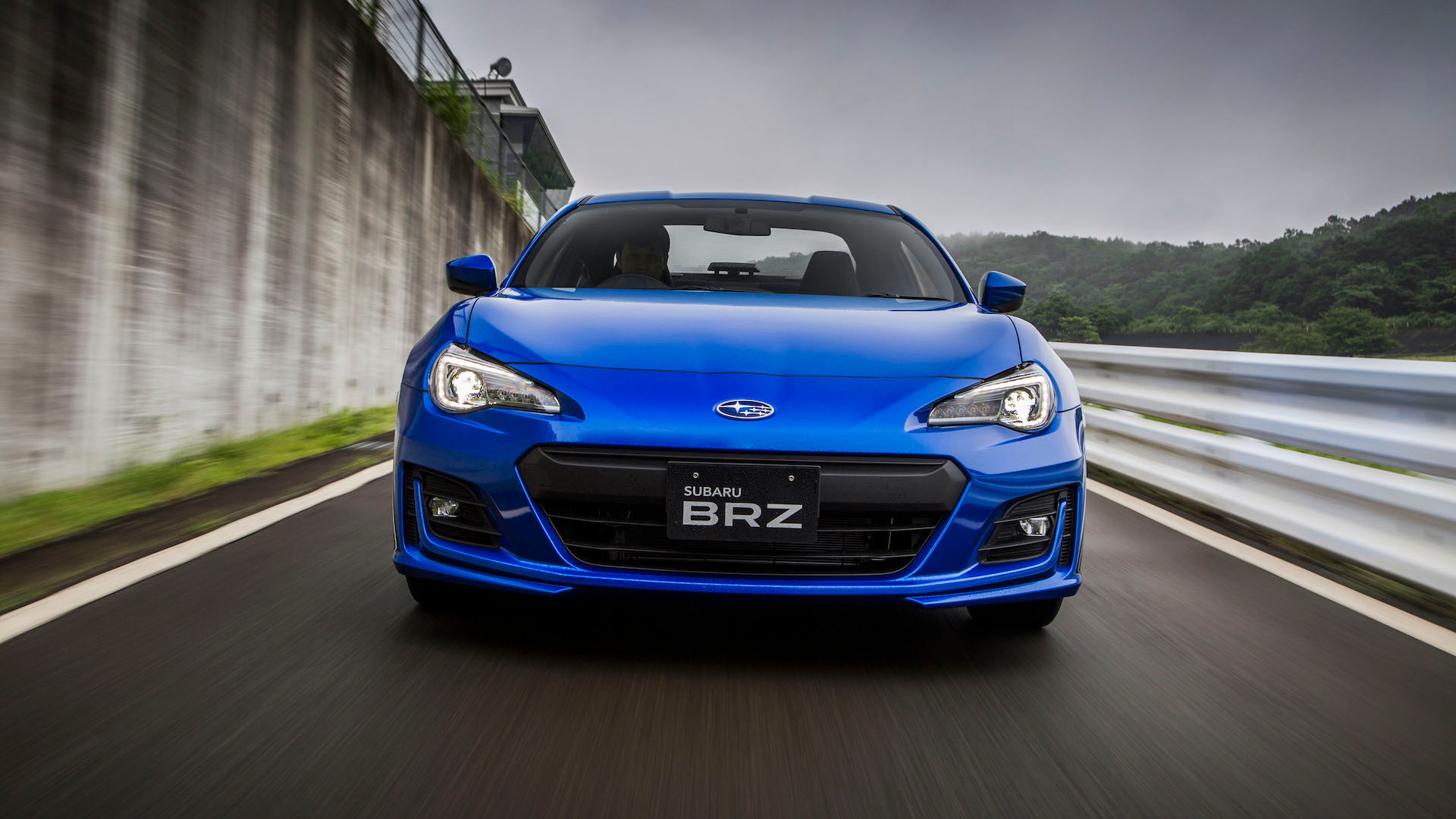 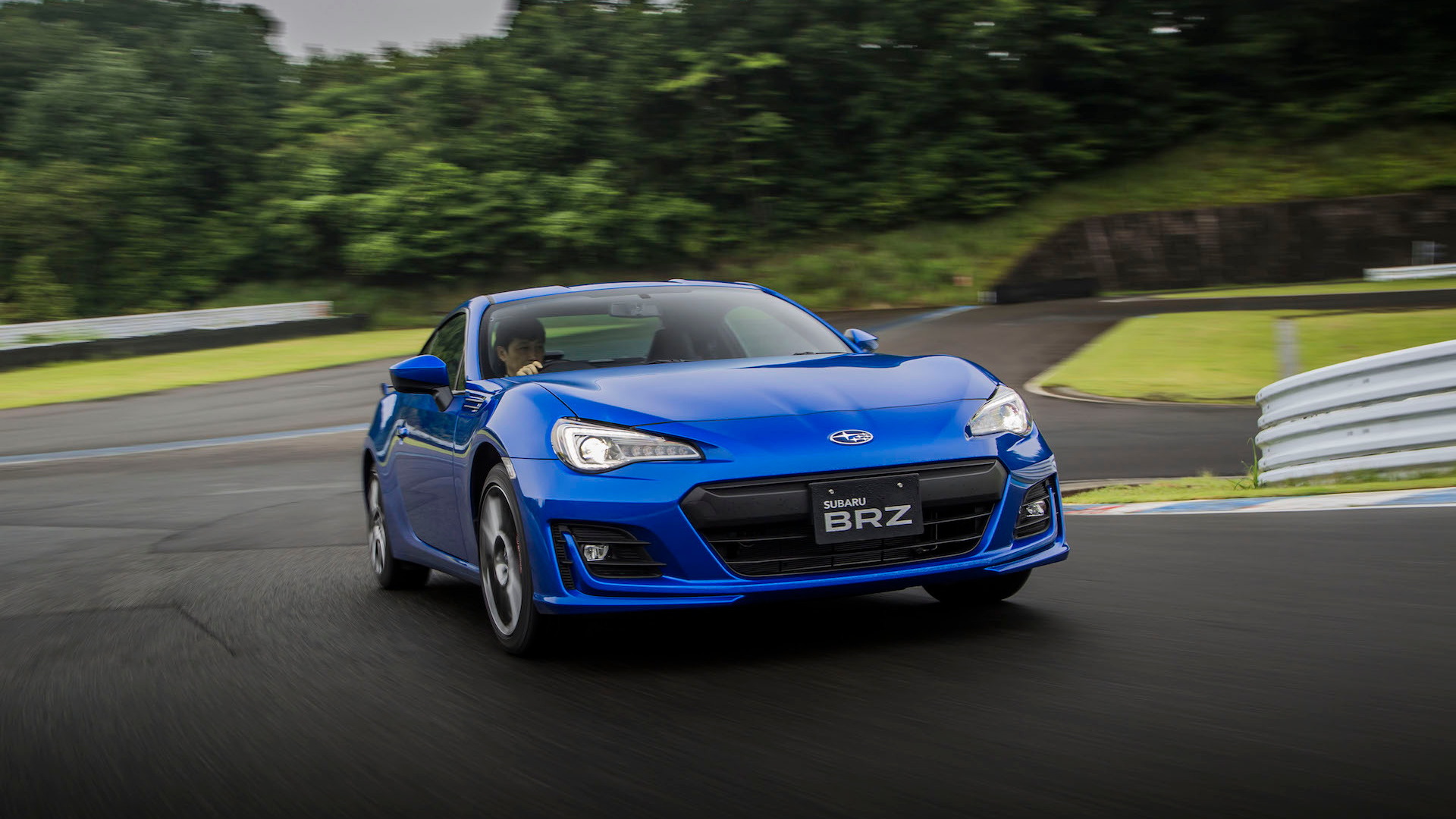 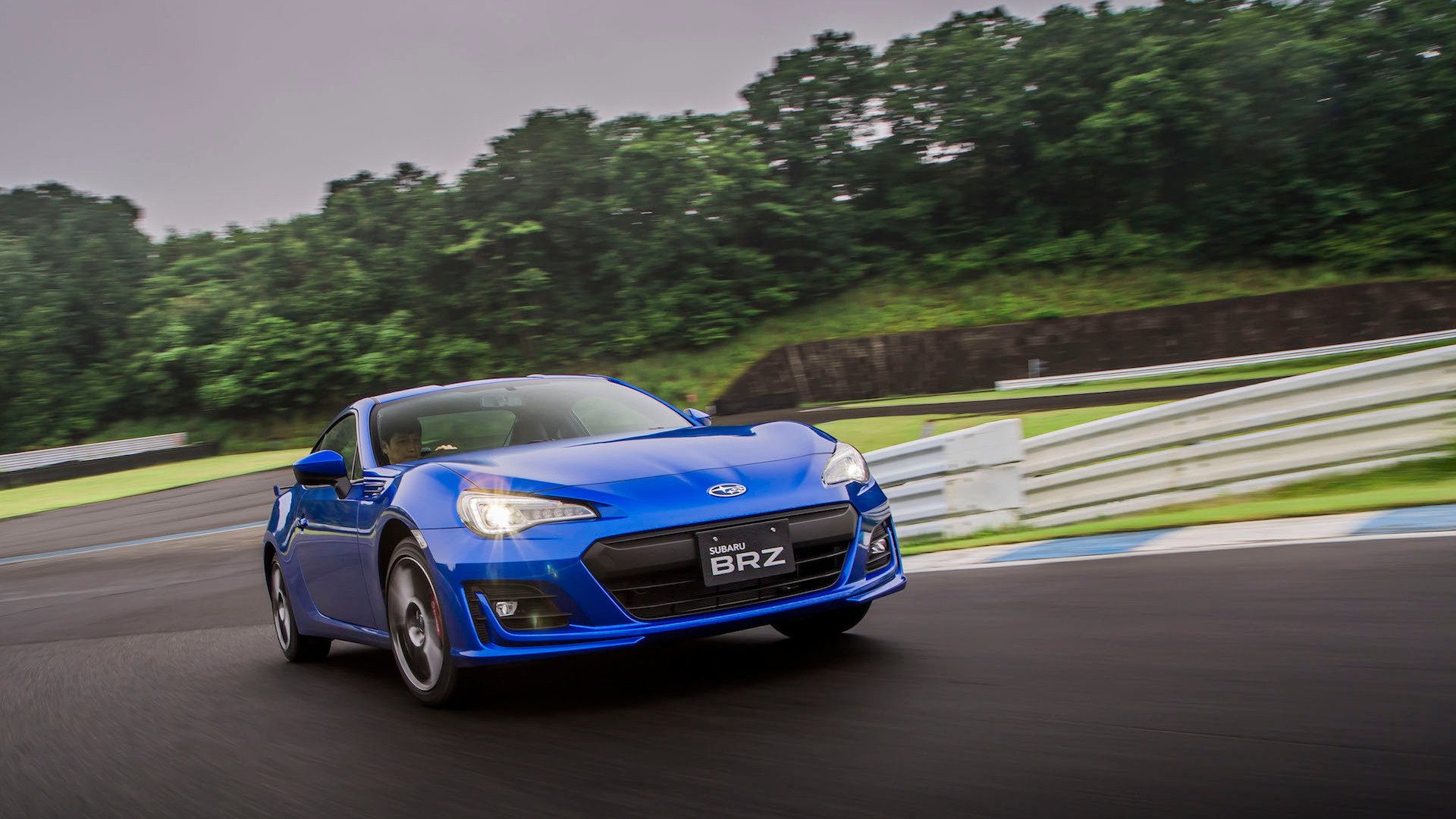 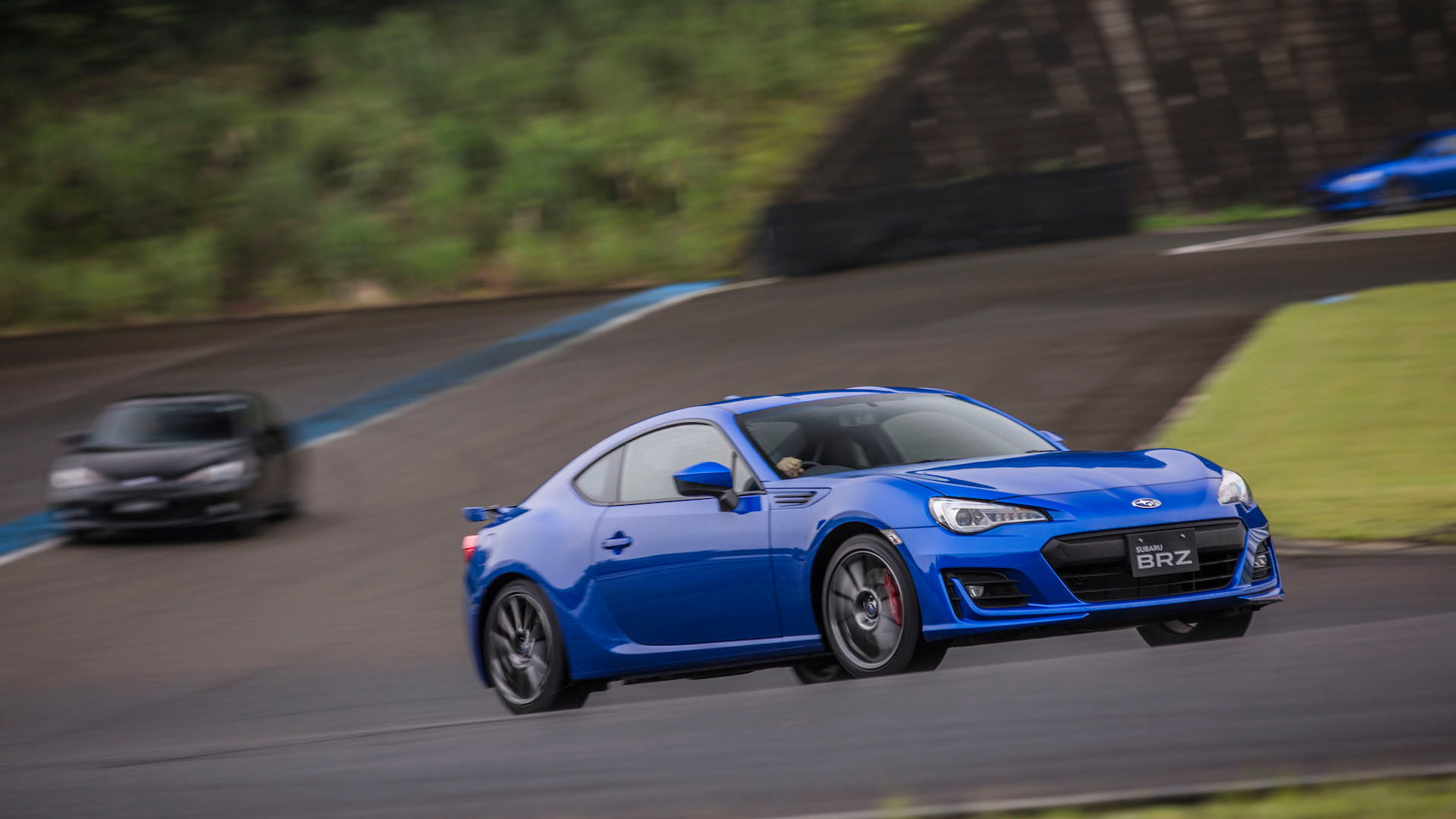 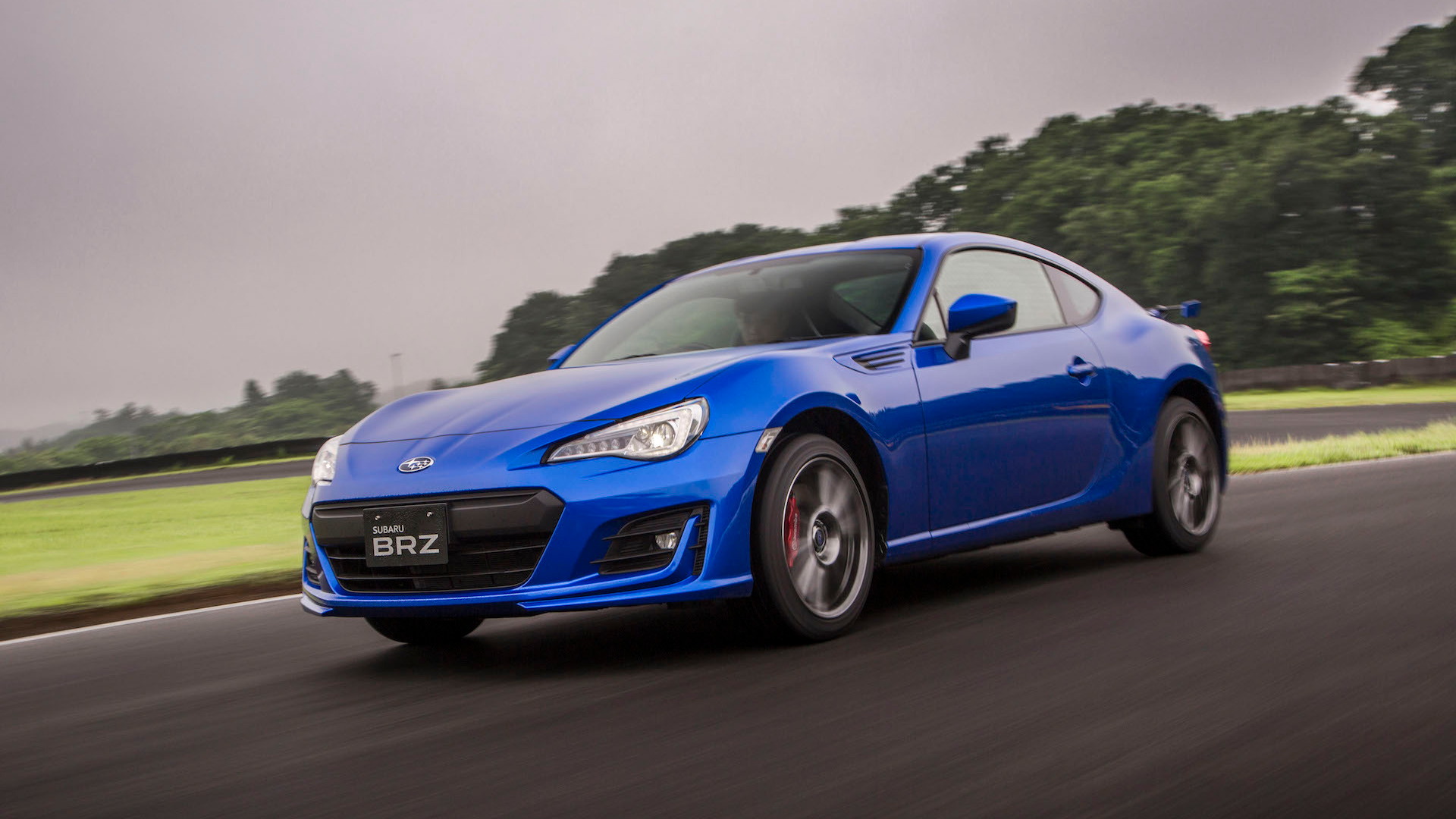 The Subaru BRZ is trying to save sports cars with headsmackingly simple counterprogramming. It's heroic stuff, stuff that would have been written about in the ancient sagas, if those sagas had had a first-drive column.

It's so straightforward and unironic, it's almost impossible for a Gen Xer to bear. The car world is powering through the adaptive-everything era, stepping into uncharted territory with autonomy and electricity, obsessed with kilowatt-hours and charge times, and the BRZ is worried about...turn-in feel.

It is just nailing the Twitter-friendliest proverb of them all: you do you.

Sharpen the reflexes, loosen the stability-control apron strings, the BRZ does better by itself for 2017 in lots of little ways.

You might find all of them if you go on the hardcore Easter-egg hunt I did last week. The sketchy itinerary included a 12-hour trip through Russian airspace, a fearsome Fuji Speedway draped in mist and fog, four hours of bus rides without a single hottodoggu break, and a track pack of right-hand-drive 2017 BRZs, their stability control switches turned off.

For its fifth year on sale, the BRZ isn't trying to change the world, or any of its charming fundamentals. It's a real sports car, focused entirely on its low center of gravity and its near-perfect weight distribution.

It's red meat for fan boys, in a small niche of sportscars that also includes the Mazda MX-5 Miata, not to mention the BRZ's fraternal twin. Now it's called the Toyota 86, but in years prior it took its victory laps under the Scion FR-S banner.

This is not a huge universe the BRZ inhabits. Since March of 2012, Subaru's sold more than 55,000 copies around the world, about 26,000 of them in the U.S. For every BRZ you might see in the wild, you'll see five Mustangs--or more, if you're on California's Highway 1 or Maui or anywhere else with significant fleets of rental convertibles.

This is the BRZ's most comprehensive touch-up since it launched as a 2013 model. The slight alterations to the two-door coupe shape cover more moderate changes to its suspension, purposeful choices made to tighten up its act.

On the 2017 BRZ, the front end wears most of the visible upgrades. A new front bumper cap flanks new LED fog lights with body-color winglets, giving the car a bit more connection with the ground. The headlights are now full-LED units, a first for Subaru, and integrate the car’s daytime running lights.

The cockpit goes through only a modest refresh. A redesigned leather-wrapped steering wheel is a bit smaller than before. Limited-trim cars get a wrapped instrument cluster hood and seats embroidered with the BRZ logo.

Limited cars also received a 4.2-inch display in the instrument cluster with additional gauges. There's a lap-time stop watch, a G-meter, a braking-force and a steering-angle indicator, and readouts for oil and water temperature, and battery voltage.

The BRZ gets the equivalent of a deep-tissue massage for its mechanical innards. It's a refresh so soothing and subtle, the premium gas it drinks should probably come with a cucumber slice and an Enya playlist.

The flat-four is revamped lightly, and only when it's teamed with the 6-speed manual. A net of 5 additional horsepower comes from a more extensively reinforced engine block, tougher valve stems, and lower-friction cams and piston heads. The manual BRZ breathes a little bit better with an aluminum intake manifold taking over for the former plastic unit; it's a bit freer-breathing but taller, which means the trim cover over it has been ditched. (To make it look nice, it's painted a shade of red just outside of Italian copyright law.)

The vocal, moderately scootworthy flat four does what it needs to in the BRZ, but not much more. It can grunt its way out of low-speed corners so long as you keep the revs high. A Torsen limited-slip differential is standard, and helps keep the rear wheels in harmony as the car exits tighter corners. We've been praying for turbocharged STI magic fingers, but at this stage of its life, the BRZ will take what it can get.

Total output checks in at 205 horsepower and 156 pound-feet of torque. With the 6-speed paddle-shifted automatic, it's a carry-over with only the addition of the engine-block reinforcements, and power stays at 200 hp and 151 lb-ft.

Of course, we'd point you to the BRZ's short-throw 6-speed manual. It's precise and engages its gears with the snicky touch of a fencer's epee. Out in the real world, the 6-speed automatic is probably the right choice, and given its steering-wheel paddle shifters, sport mode, and downshift rev matching, it's not a bad one. But in a nice show of priorities, Subaru says only a quarter of these cars go home with someone with an automatic.

Fuji Speedway is a beast. It's yumpy, bipolar, and regularly shrouded in unpredictable bouts of mist and fog, the same stuff that blots Mount Fuji out of the photos taken by millions of visitors.

The weather is so changeable in the Fuji foothills, it played a role in the switch of Formula 1 to Suzuka roughly a decade ago. After the worldwide financial crisis, the F1 race didn't come back.

The fog did, and it came back just in time for a first spin in the BRZ on Fuji's training circuit, a handling course on a nearby hill. The light mist that followed our tour bus west from Tokyo refused to budge. Instead it just lifted the oil to the surface of the handling track, without washing it away.

It turns out those are exactly the conditions that reveal just how much has changed with the BRZ.

Push the flat-four to life, and its brap gets loud and enthusiastic. Thread through a few wet corners, and the vocal four drifts out of focus. The suspension work done to the BRZ takes over the front layer of your brain, pushing the driving conditions into another background layer.

The BRZ's strut and double-wishbone design hasn't changed, but like the flat four, it's been reworked. The front springs are about 10 percent stiffer, engineers tell us, while the rears are softer by a smaller increment. It's to smarten up the steering while maintaining a softer attitude toward roll, letting the tires do their work. The strut braces are stiffer, as are the wheel housings.

The big change is a new Performance Package, offered on manual-shift cars in Limited trim. It includes beefed-up Brembo brakes, with 12.8-inch rotors and 4-piston calipers in front and 12.4-inch rotors and 2-piston calipers at the back. Sachs ZF shock absorbers are swapped in, as are black-finished 17-inch alloys a half-inch wider than the base wheels, riding on 215/45R-17 summer tires. Weight goes up 28 pounds from base trim (2,785 pounds), but still checks in 12 pounds lower than Limited BRZs (2,835 pounds).

The flick of a switch

We back-to-back the '16 cars with both base and performance-trim cars for a half-dozen laps, and dial through retuned electric power steering. It's still a friendly facet of the BRZ's personality: it takes a quick set and has reasonable road feel.

What becomes clear is the BRZ really does ask you to know how you're going to use it. If it's a latter-day Celica you have in mind, take the base Premium trim, as an automatic. It paddles easily into corners, not greasily, with a shade more compliance than the more focused version.

Really, the most dramatic change of all is the BRZ's stability-control programming. Its new algorithm lets it have more yaw, a real complement to the car's predictable nature. Without being overpowered or over-tired, the BRZ lets its tail hang out a bit before a small neat correction reels it back in.

It's immediately obvious on one particular corner where we power out left after an uphill climb: the '16 car hammers on its anti-lock, trying to spank the tail back into line, while the updated car lets it drift its rear in a controllable, usable slide that pivots it around the corner more neatly.

They've given it more permission to be a sports car--even if the stability control will still come on in extreme situations, though it's ostensibly been turned completely off.

Uphill apexes, blinding fog, a nearly mile-long front straight that gives you too much time to consider your chosen path...Fuji is a daunting place, made more so when the lead driver darts away under cover of fog in an all-wheel-drive rally-spec WRX.

Wrestling with the task of catching up, looking for taillights, learning a brand-new course in a jetlag daze and a literal fog--you're chasing ghosts.

Two laps at a time, fighting through the murk, the cones and curbs start to make sense after a couple of flying passes down that intimidating front straight. Take it in 6th gear, wait longer than you think for the braking pointer, then--then it's time to play with the BRZ's new attitude.

The new tune has better bump absorption, and quickly settles down after rolling over the lip of some of the curbs; the BRZ's Sachs dampers make it stiffer, but not exotic-car stiff. The steering feels smoother on center, even though the steering wheel is marginally smaller than before. Grip at 9 and 3, find a middle gear, and you'll remember how the BRZ's transient response is one of its high points.

The gearbox? It's exactly what I remember, only completely in the wrong place. After six laps, I'm still hunting and swapping back and forth to get used to a left-drive shifter in a right-drive world. With 1st gear way to the left, 3-2 downshifts are a brain-fucking misery for a few laps until they finally make haptic sense.

Then it's time to dance. Heel-and-toe shifts aren't just possible, they're pretty easy, with the neatly placed pedals. Smooth power delivery puts steering and braking on the same pedestal as acceleration; momentum is everything.

Track-day coaches love to teach with this car for a reason. The BRZ doesn't exaggerate anything except intake noise, and doesn't come down on you hard for ham-fisting the controls. It just chucks you under the chin, brushes you off, and points you down the right path.

its best and highest use as a weekend trackster means the BRZ has to be somewhat practical. It is, somewhat. It has an upright driving position and a pretty controlled ride, from what we've sampled in U.S.-market 2016 models and before.

The front seats are on point for race days, but could be softer for everyday use. At least you'll fit with a helmet in front. In the back? A child safety seat might work, but better to flip 'em down and throw an extra tread in back, in case you cut a sidewall.

Safety is a Subaru focus, and the BRZ now has a standard rearview camera and good crash-test ratings, though it's not quite as good as other Subies in some crash tests.

All versions have an infotainment system with a 6.2-inch touchscreen incorporating HD Radio, satellite radio, a CD player, Bluetooth audio streaming, iTunes tagging, a USB port, and an aux-in port. It's also compatible with smartphone apps for Aha, Pandora, and Stitcher, among others.

The 2017 Subaru BRZ hits showrooms in early September, with Performance Package cars arriving right at year's end. Prices shouldn't rise much at all from today's bargain levels, which means the BRZ will remain one of today's best performance bargains, a car that refuses to let go of the past, in all the right ways, for all the right reasons.

Subaru flew us from Paris to Tokyo to drive the BRZ, introduced us to the Tokyo Mule, then flew us home in time so we could get fireworks over the state line, where they're cheaper and blow-up-ier.