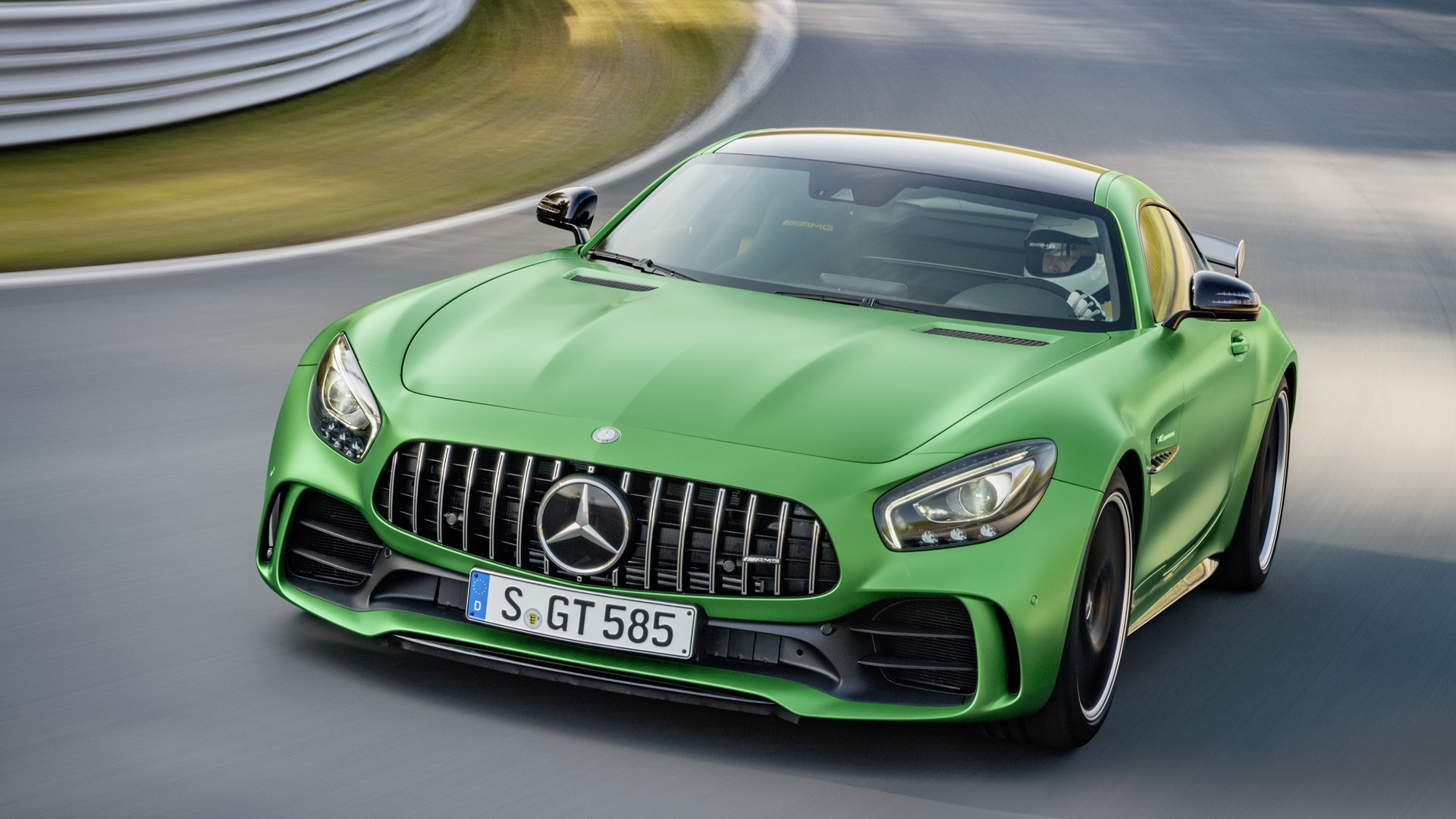 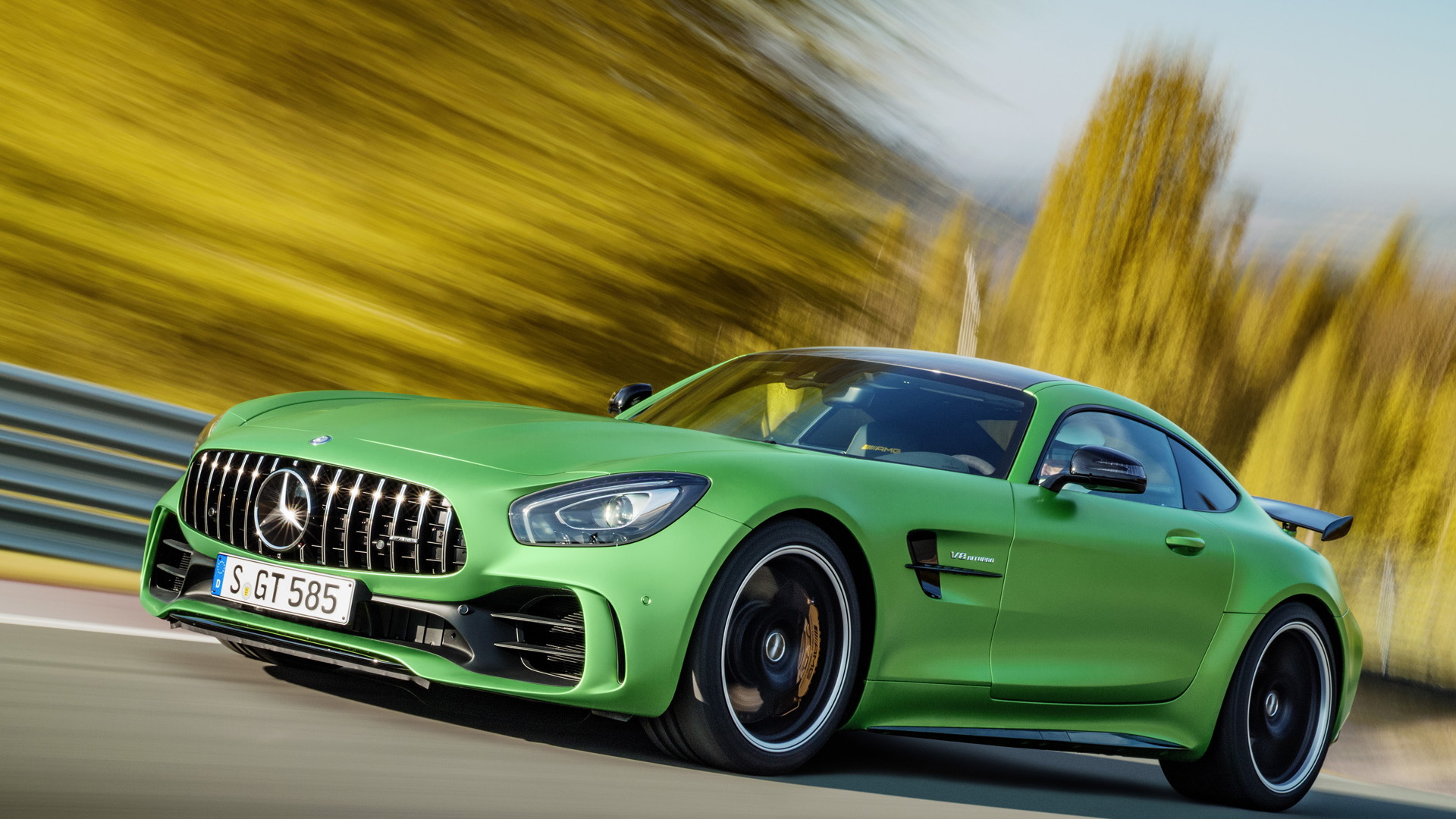 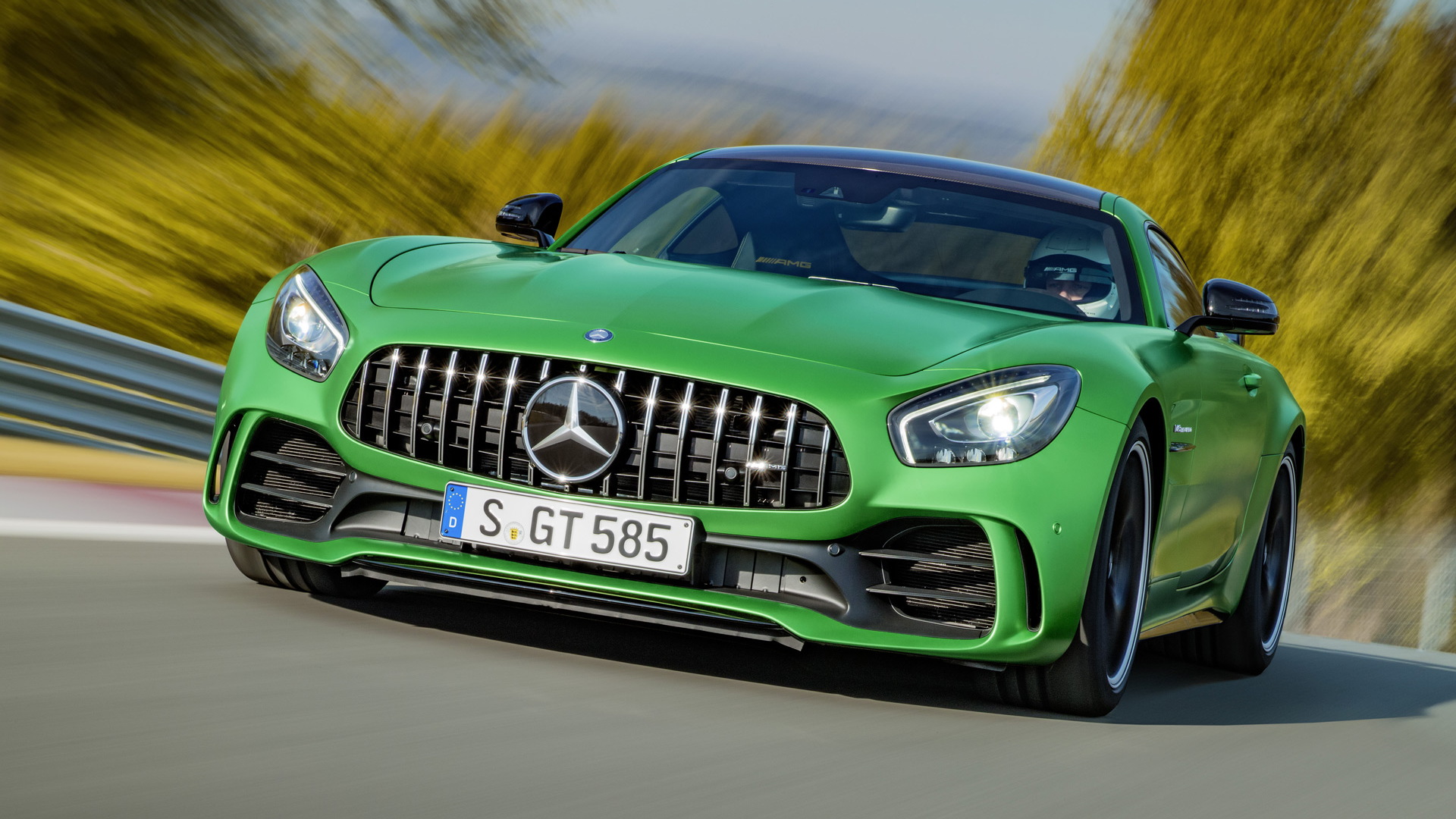 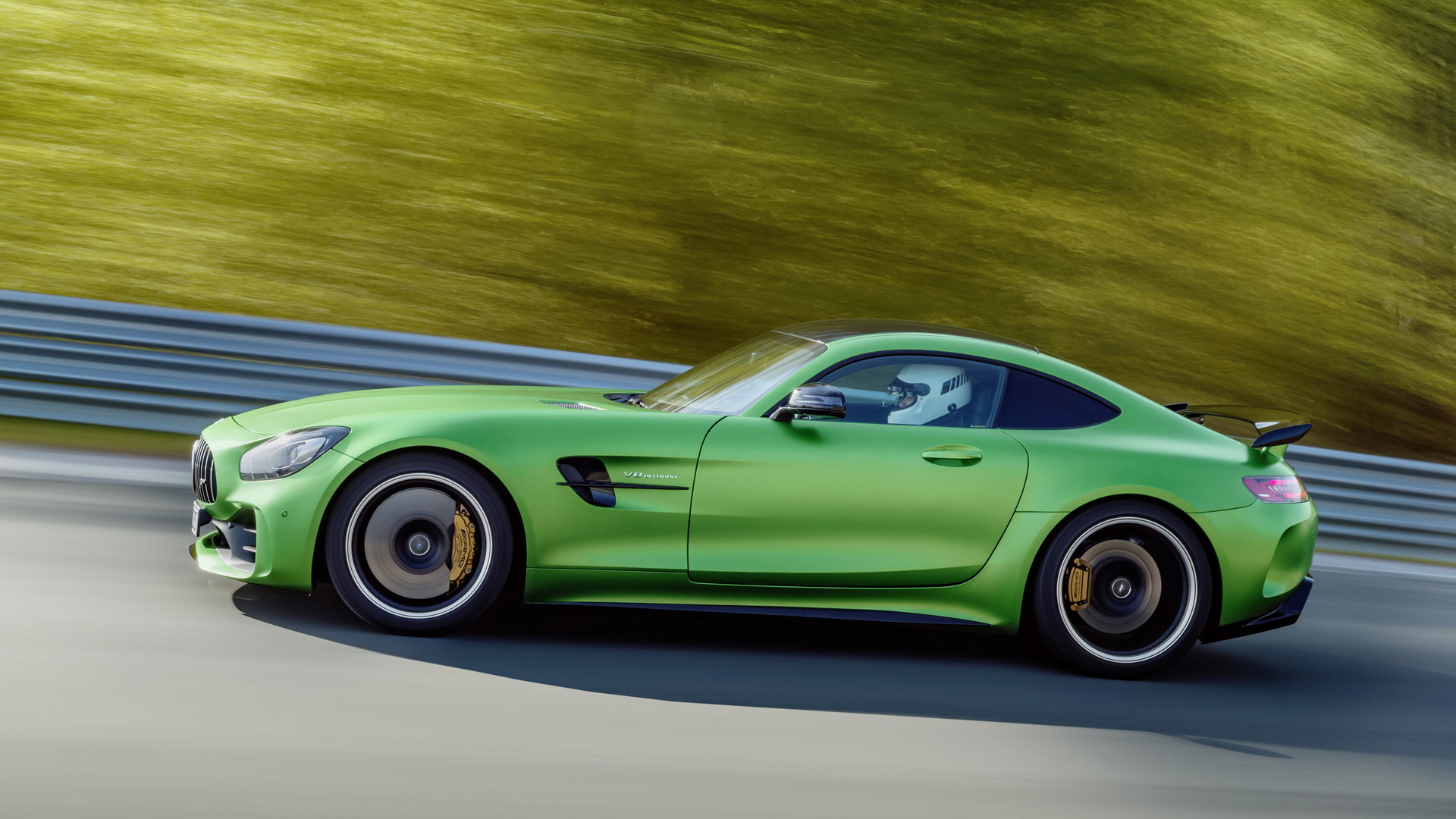 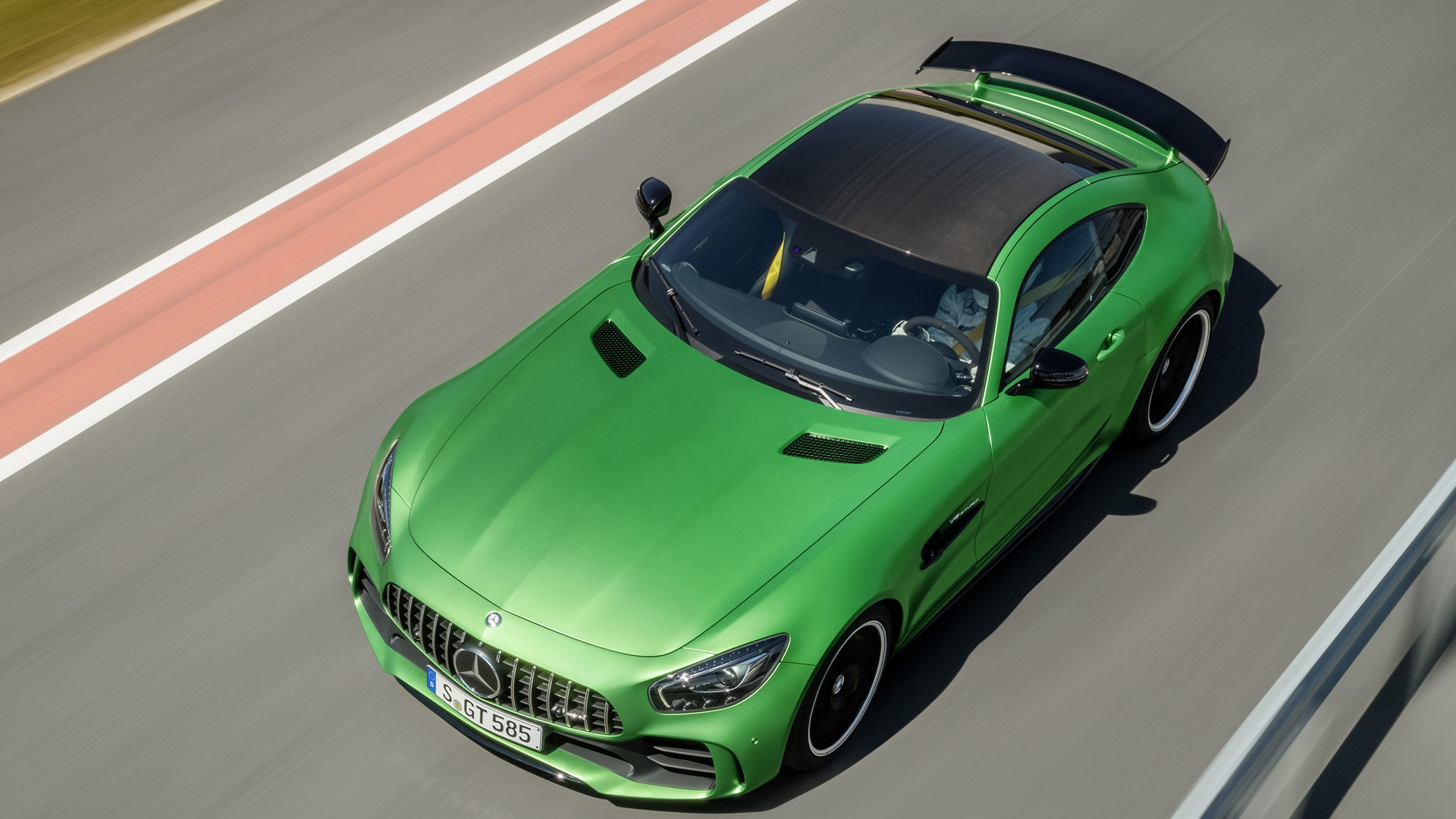 Mercedes-AMG’s new GT R sports car was hardly a secret, but regardless it’s finally here and there are plenty of details to divulge.

The GT R is a track-focused version of the GT sports car launched by AMG two years ago, and it’s coming onto the market next year with even more power, less weight, advanced aerodynamics and active rear-wheel steering, making it a perfect match for cars like the Chevrolet Corvette Z06, Nissan GT-R Nismo and Porsche 911 GT3 RS.

There’s no mistaking the GT R as anything but the most extreme version of AMG’s GT, at least until a Black Series arrives. It features a much wider track than the regular GT as well as an imposing "Panamericana" grille whose design is inspired by the grilles fitted on some classic Mercedes racers.

The grille is also shared with the related GT3 racecar which demolished the competition during May’s Nürburgring 24 Hours race. The car claimed the top four spots with the winning car coming from AMG-Team Black Falcon.

Like the GT3, the GT R has been extensively tested on the world’s most punishing racetrack, the Nürburgring. This  fact has even inspired the car’s hero color, labeled AMG Green Hell Magno.

Under the hood is the familiar twin-turbocharged 4.0-liter V-8, though here it’s been tuned to deliver a supercar-like 577 horsepower and 516 pound-feet of torque. Drive is to the rear wheels via a 7-speed dual-clutch transaxle, and owners can expect 0-60 mph acceleration in just 3.5 seconds. The top speed is 198 mph.

To go along with the extra power is an extensively modified chassis and new aerodynamics. Aluminum and carbon fiber reinforcements have been made throughout to increase stiffness while helping to bring the curb weight to 3,428 pounds (in European spec). The weight distribution is a rear-biased 47.3:52.7 front-to-rear split.

The suspension of the GT R is also designed for racetrack use. It consists of double wishbones and is constructed from forged aluminum. High camber and toe-in stability makes the car eager to corner hard, and motorsport-inspired “uniball” bearings on the lower wishbones at the rear axle mean camber and toe-in is unchanged even at high loads.

Attached at each corner are light alloys (19-inch front and 20-in rear) shod with Michelin Pilot Sport Cup 2 tires. These work together with the new rear-wheel-steering system to aid handling. Up to 62 mph, the rear wheels are turned in the opposite direction to the front wheels, corresponding to a virtual shortening of the wheelbase and boosting agility when cornering. Above this speed, the system turns the rear wheels in the same direction as the front wheels, corresponding to a virtual lengthening of the wheelbase and improving handling stability.

Further aiding the handling is speed-sensitive steering plus an electronic limited-slip differential at the rear axle. Many of the electronic systems can be adjusted, including  the traction control which now has up to nine settings. Massive steel brakes are standard but buyers will have the option of carbon-ceramics discs.

Beyond the new grille, the GT R can easily by spotted by its enhanced body. Below the grille is a new, wider intake and moving rearward takes you to the new side sills and eventually a massive diffuser that integrates center-mounted exhaust pipes. There’s also a large fixed rear wing.

But there are some active elements too, like a front panel beneath the car that moves depending on the speed to create a Venturi effect and help boost downforce. This feature alone creates as much as 88 lb of downforce at speeds of 155 mph. There are also active panels in the front bumper to guide air as required.

In the cabin, the designers have added sports seats lined in Nappa leather and microfiber. The available yellow seat belts, dials with yellow highlights, piano black trim and special controls, including those for the new nine-setting traction control system, underline the unique standing of the GT R.

AMG will start sales of the GT R in the summer of 2017. It arrives as a 2018 model. Before it arrives, AMG will finally start selling the base GT alongside the GT S already on offer, bringing the price of entry for the GT to just over $112k. Pricing for the GT R will be announced closer to next year’s market launch.

"With the new AMG GT R, we have reached the next level of driving performance,” AMG boss Tobias Moers said in a statement. “This road-going sports car with motor-racing genes and innovative technical solutions offers an ultimate driving experience that allows people to feel our motorsport origins in every fiber.”

Following the debut of the GT R at the Brooklands racetrack in England’s south earlier today, AMG has taken the car to wow audiences at the 2016 Goodwood Festival of Speed currently underway. For more from the event, head to our dedicated hub.