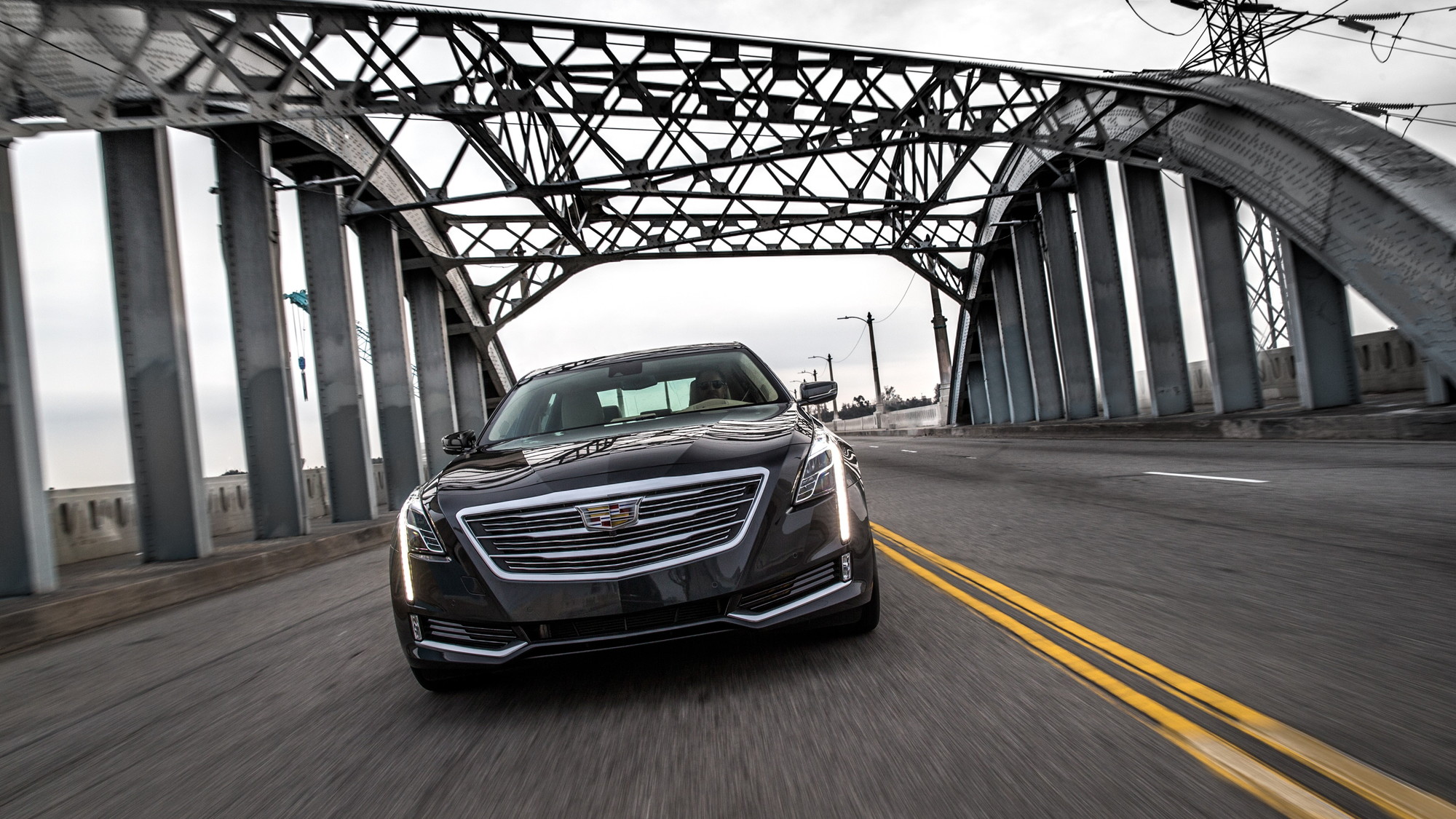 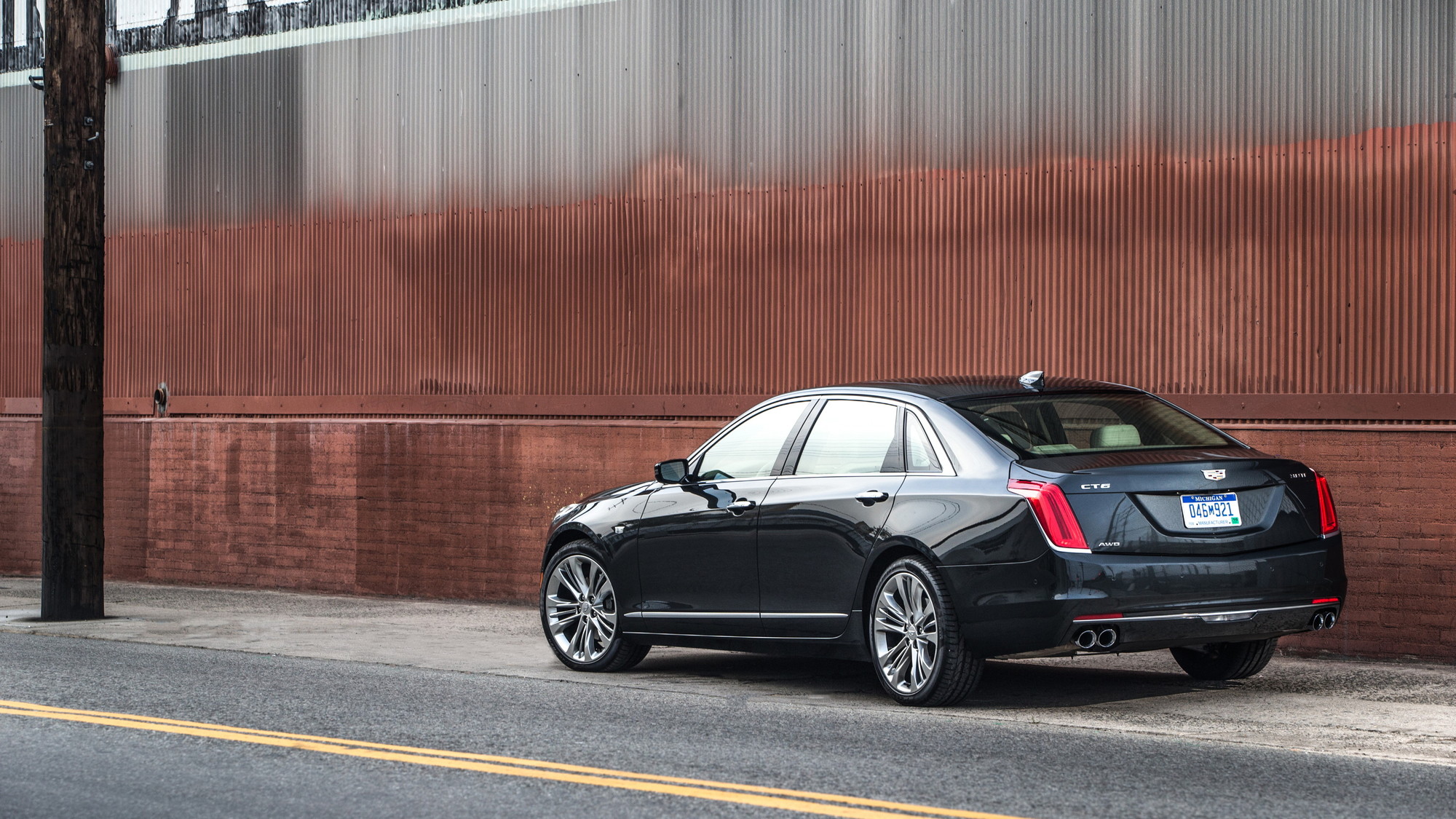 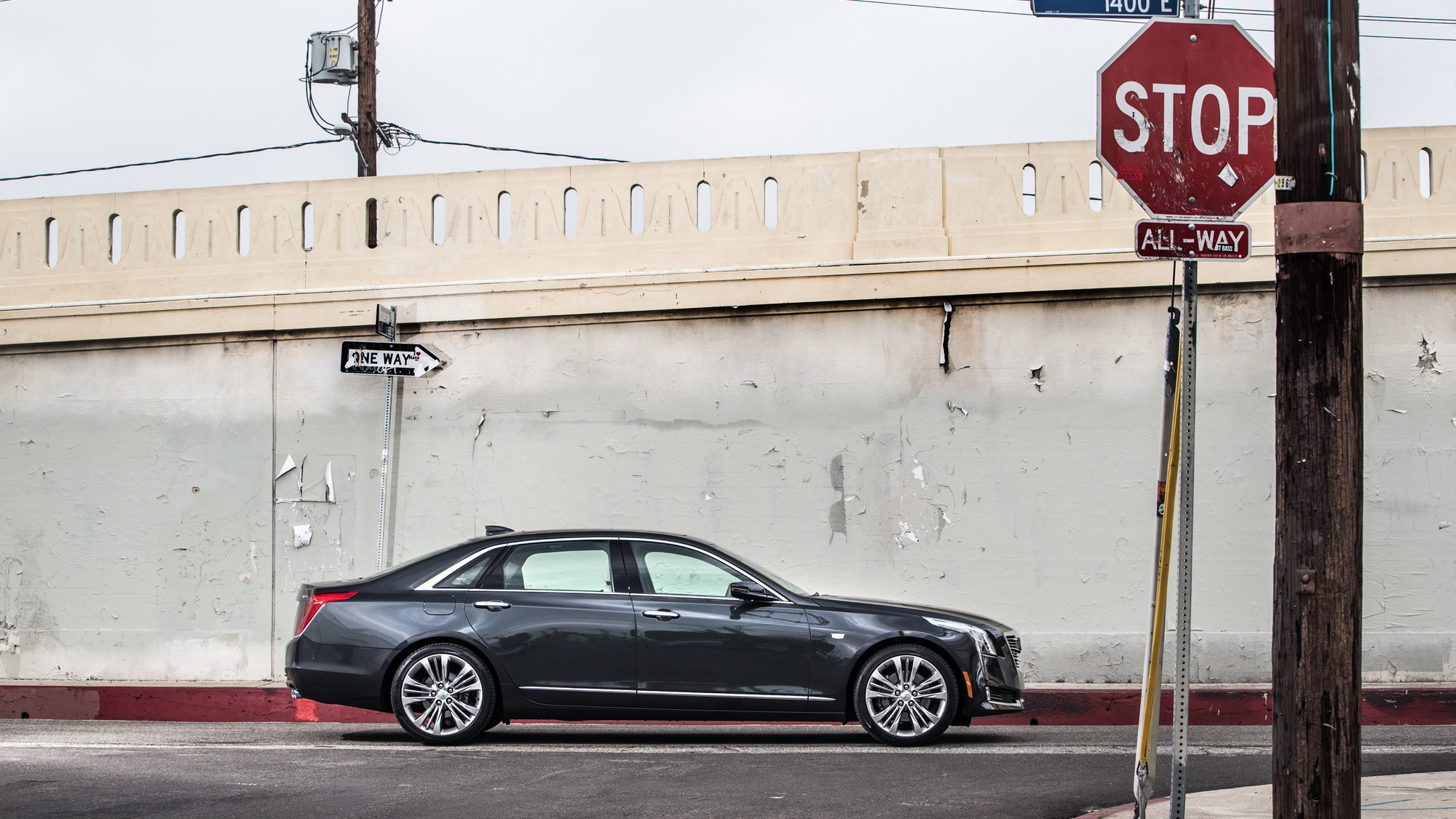 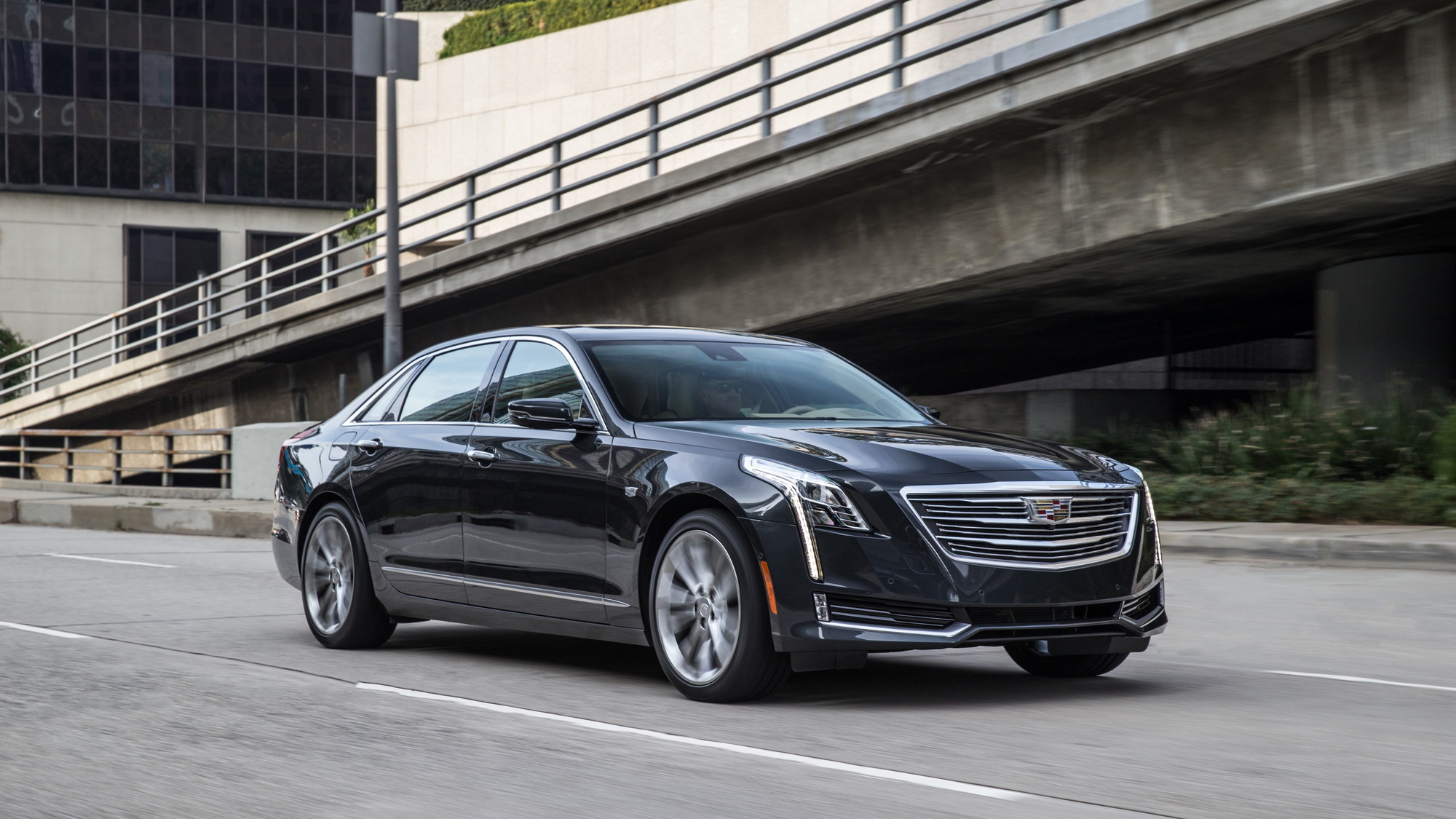 Cadillac has a problem. Over the past few years it has developed and delivered a pair of sedans—the ATS and CTS—that are as good as or better than anything Europe has to offer. And yet, car sales were down last year and those cars really haven’t put a dent in the sales of the class leaders. For instance, Cadillac sold 26,873 ATS sedans and coupes last year compared to some 140,000 BMW 3- and 4-Series models. The CTS did a bit better on a percentage basis, as Cadillac churned 19,485 examples of its mid-size sport sedan compared to about 50,000 Mercedes E-Classes.

So what’s a brand that wants to prove it delivers top-notch luxury to do? Well, keep plugging away and keep building great cars.

Cadillac’s latest offering to take on Europe’s best is the 2016 CT6 full-size sedan, which is arriving in March. A new flagship model for the brand, the CT6 is actually a “tweener.” It’s sized like the BMW 7-Series, which makes it about four-to-five inches shorter than the Audi A8 and Mercedes-Benz S-Class, and priced more like the smaller Audi A6, BMW 5-Series, and Mercedes E-Class.

We recently headed to Los Angeles to see if the CT6 has the chops to rival those revered cars.

This wasn’t a typical press trip. Cadillac provided a curated experience along the lines of a day in the life of a prospective buyer. It started with a lunch at a chic downtown Italian restaurant, followed by a quick $14 drink at a rooftop bar that I was far too uncool to patronize. For every attractive woman in the place there was a twenty-something guy with a man bun, knit cap, or decorative neck scarf. The first day ended with dinner in an artist’s studio. You know, like the typical Cadillac owner might schedule for any given Wednesday night.

Of course, I was shuttled to all of these activities in the back seat of the new CT6. Let me tell you, it’s not a bad place to be. There’s enough legroom for an NBA forward, and headroom is plentiful, too. Four-zone automatic climate control is available so occupants can be comfortable wherever they sit, and a large center console provides storage and a handy armrest. Though I didn’t use it, Cadillac also offers a rear entertainment system with a pair of 10-inch screens, an HDMI port, and streaming capability through the OnStar system’s 4G LTE and Wi-Fi hotspot connection.

However, I have a couple of complaints that I wouldn’t have in the German cars. The seat belt receptacles sit too low, making them hard to find when you try to buckle in, especially with the center console down. The middle seating position is extremely unfriendly, as the outboard seats are practically buckets and the middle occupant has to sit on a perch and deal with the transmission tunnel. And, though minor, the rear doors should have automatic closers. On several occasions, greeters had to shut the door more than once to get it to fully latch. That doesn’t happen in an S-Class.

If day one was for the passenger, day two was for the driver. Like the rock stars we aren’t, journalists didn’t have to deal LA traffic on the drive day. Instead, Cadillac flew us by helicopter to rural San Diego county to drive the CT6 away from city traffic.

Like the ATS and CTS, Cadillac has thrown some impressive engineering expertise behind the CT6. This car uses the lightweight principles Cadillac employed for those cars and takes them a step further.

The body structure combines aluminum and steel, and Cadillac says that makes it lighter than an all-aluminum car would be. That’s because steel insulates against sound better and therefore Cadillac needed to add less sound deadening material.

The result is a car that, in its lightest form, weighs in at just 3,657 pounds. That’s about 1,000 pounds less than the S-Class and 100 pounds less than the size-smaller 5 Series and E-Class. Of course, that’s only with the 2.0-liter turbocharged four-cylinder engine and rear-wheel drive. Models with the twin-turbocharged 3.0-liter V-6 and all-wheel drive weigh in at 4,085 pounds. That’s still 225 pounds lighter than the lightest 7-Series, but it means the CT6 doesn’t exactly spar against the welterweights.

Given its modest weight, I was expecting the CT6 to act like a larger version of the CTS once I got out on San Diego county’s twisty backroads. I was wrong. There is simply too much car here to deliver the sporty handling of one of the best mid-size sports sedans on the planet. Instead, the CT6 combines a capable dynamic character with on-road comfort.

Cadillac is launching the CT6 with a trio of direct injection engines, all mated to eight-speed automatic transmissions: a turbocharged 2.0-liter in-line four making 265 horsepower, a 3.6-liter V-6 with 335 horsepower, and a 3.0-liter twin-turbo V-6 that produces 404 horsepower. A plug-in hybrid will be offered early next year.

The purest expression of the CT6’s weight savings ideology is actually the 2.0-liter, rear-wheel-drive base model. With 428 fewer pounds to carry around, this version feels the most agile, the lightest on its feet, and the closest thing to a full-size sports sedan. The four-cylinder provides good power, too. Cadillac quotes a 6.1-second 0 to 60 mph time and that feels right to me.

The new twin-turbocharged 3.0-liter V-6 delivers strong, smooth power, cutting the 0 to 60 mph time to 5.3 seconds. However, it also adds more weight over the nose. That makes turn-in a bit slower and gives the car a tendency to understeer when pushed into corners. The lighter base model rotates a bit better and so do models equipped with the optional active rear steering system (part of the $3,300 Active Chassis Package), which can apply 3.5 degrees of opposite steering angle to the rear wheels to virtually shorten low-speed turns.

Almost but not quite cabin

This is Cadillac’s finest cabin yet, and it is rife with beautiful design and the highest quality materials, including wood, leather, carbon fiber, and metal. It has the next generation of the CUE infotainment system, complete with a 10.2-inch screen and a new touchpad. Other available amenities include a 34-speaker Bose Panaray audio system, welcome lighting that illuminates the car as the driver approaches, a cool new rear camera mirror that triples the width of the view behind, and a Rear Seat Package that comes with a massaging feature and a pair of 10-inch screens for rear-seat entertainment.

While the amenities might be up to snuff, the attention to luxurious detail isn’t quite up to the levels of the competition. The German full-size cars have the best interiors on the planet, with little design flourishes and unexpected bits of metallic trim in areas like the seat control panels and across the dashboard. Those cars also have better seats than the Caddy. I found the CT6’s driver’s seat to be a bit too firm, with too little bolstering and not enough adjustments or range of motion in the adjustments to find my ideal seating position.

Don’t get me wrong. The CT6’s interior is spectacular. It just lacks some of the little bits of surprise-and-delight flair that the Germans offer.

Not quite a BMW experience

After the media drive, I returned home to pick up a 2016 BMW 7-Series test car. I got into the driver’s seat and found that it had the adjustments and range of motion that I preferred. I scanned the dash and door panels and saw more metallic trim and design detail than could be found in the Cadillac. I got into the backseat, shut the door lightly and watched the door close itself the last few millimeters. And I when I tried to fasten the seat belt, it clicked in with ease. On the road, though, the BMW wasn’t quite as planted as the Cadillac, even in Sport mode.

If the 2016 Cadillac CT6 is aiming to punch above its class at heavyweights like the 7-Series, S-Class, and A8, it’s going to get knocked flat on its back. But this new Caddy also starts almost $30,000 below any of those cars and still offers real luxury and performance. It seems to me that the CT6 does have a place in the market, but it is as a tweener. With the space of a larger car, the handling of a smaller car, and a starting price in the $50,000s, the CT6 is a large luxury car value.