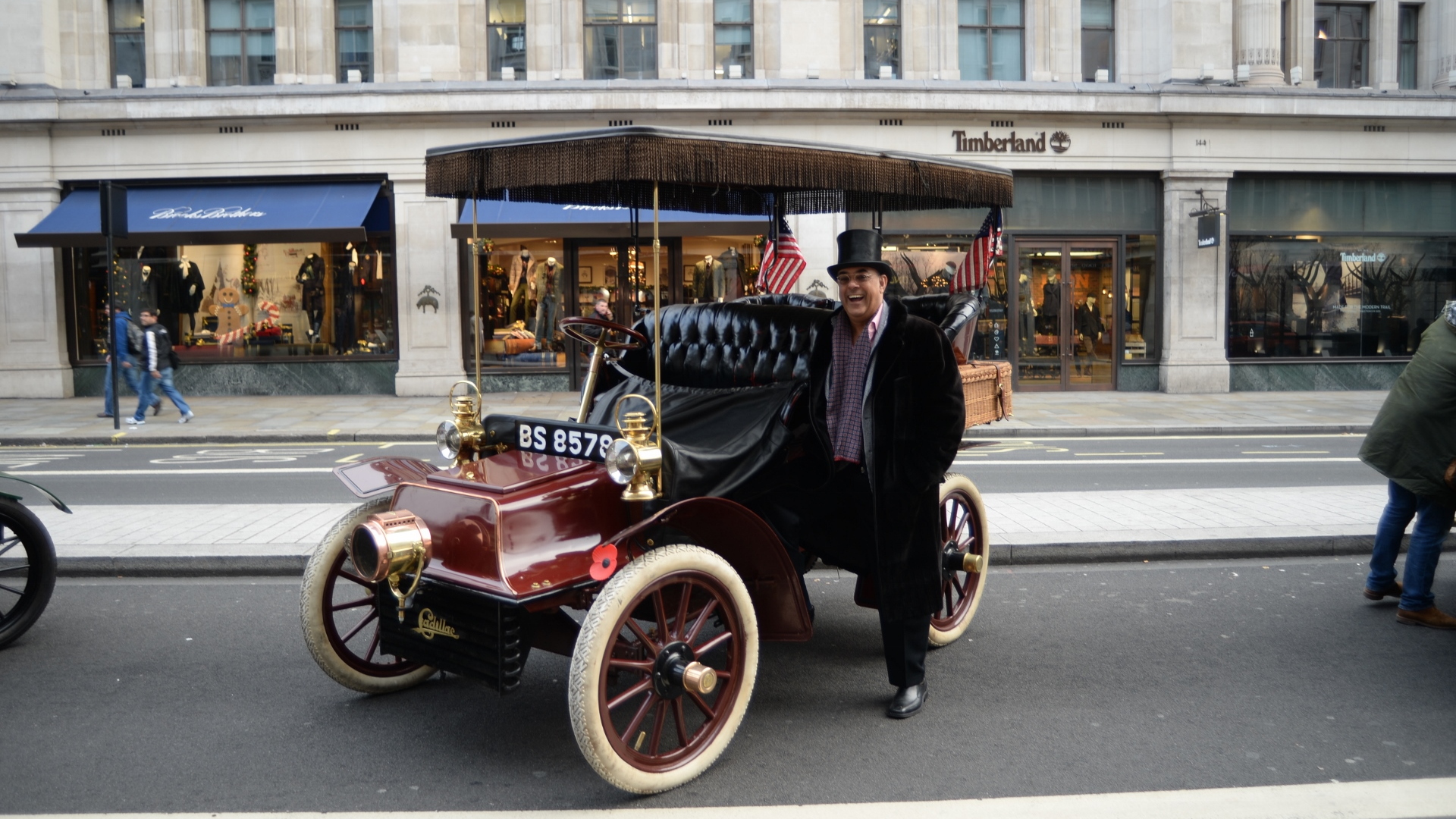 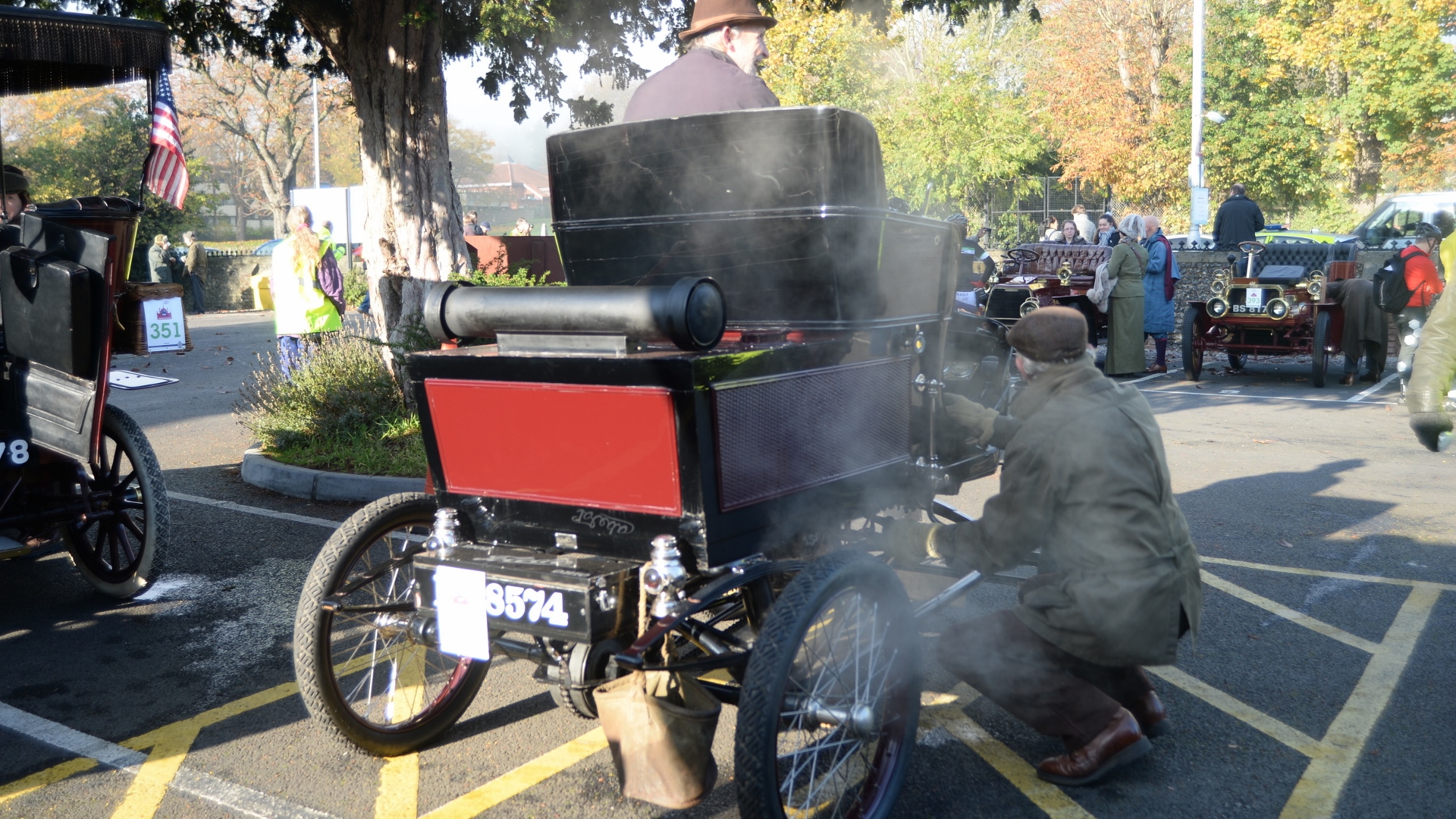 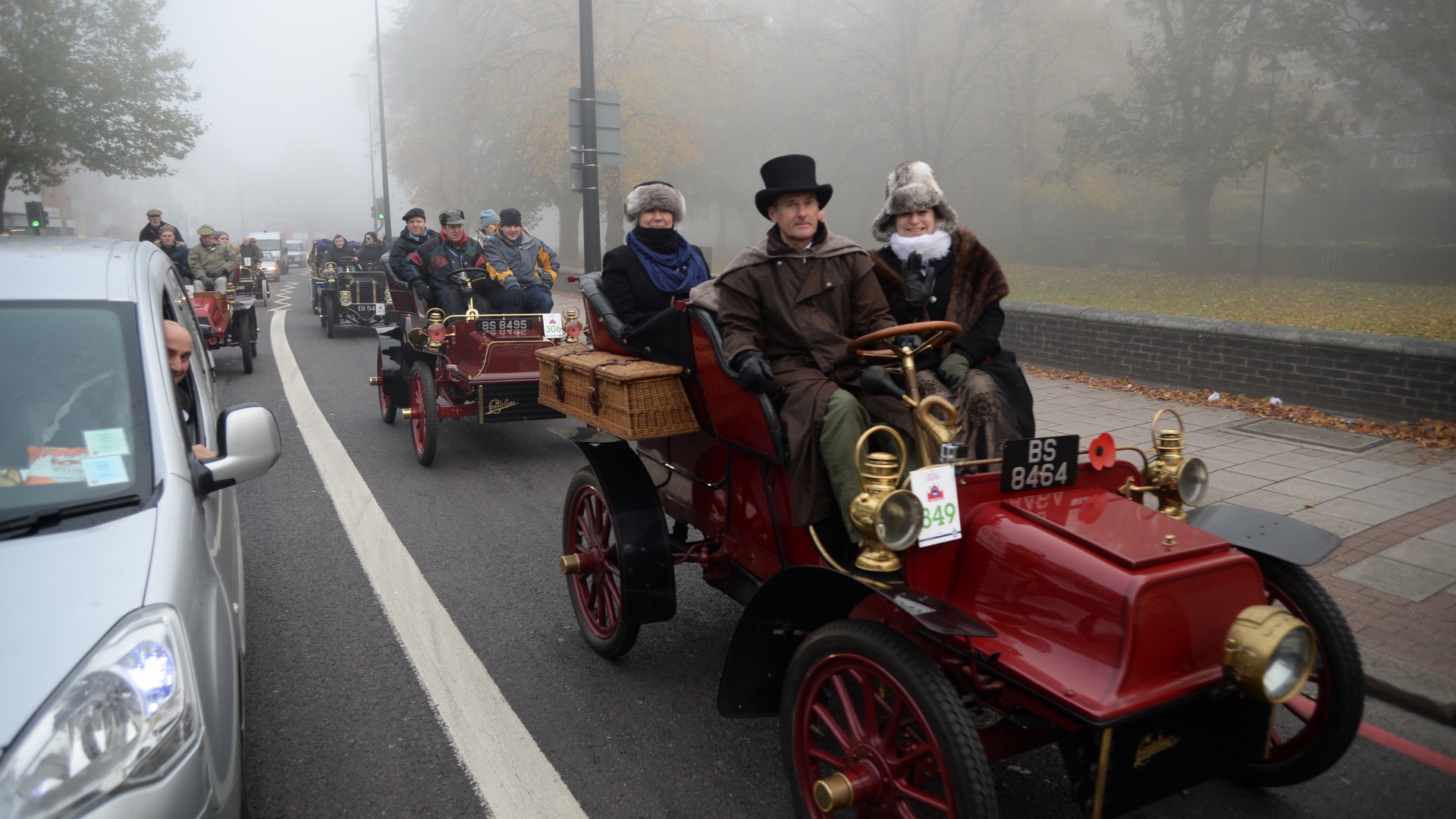 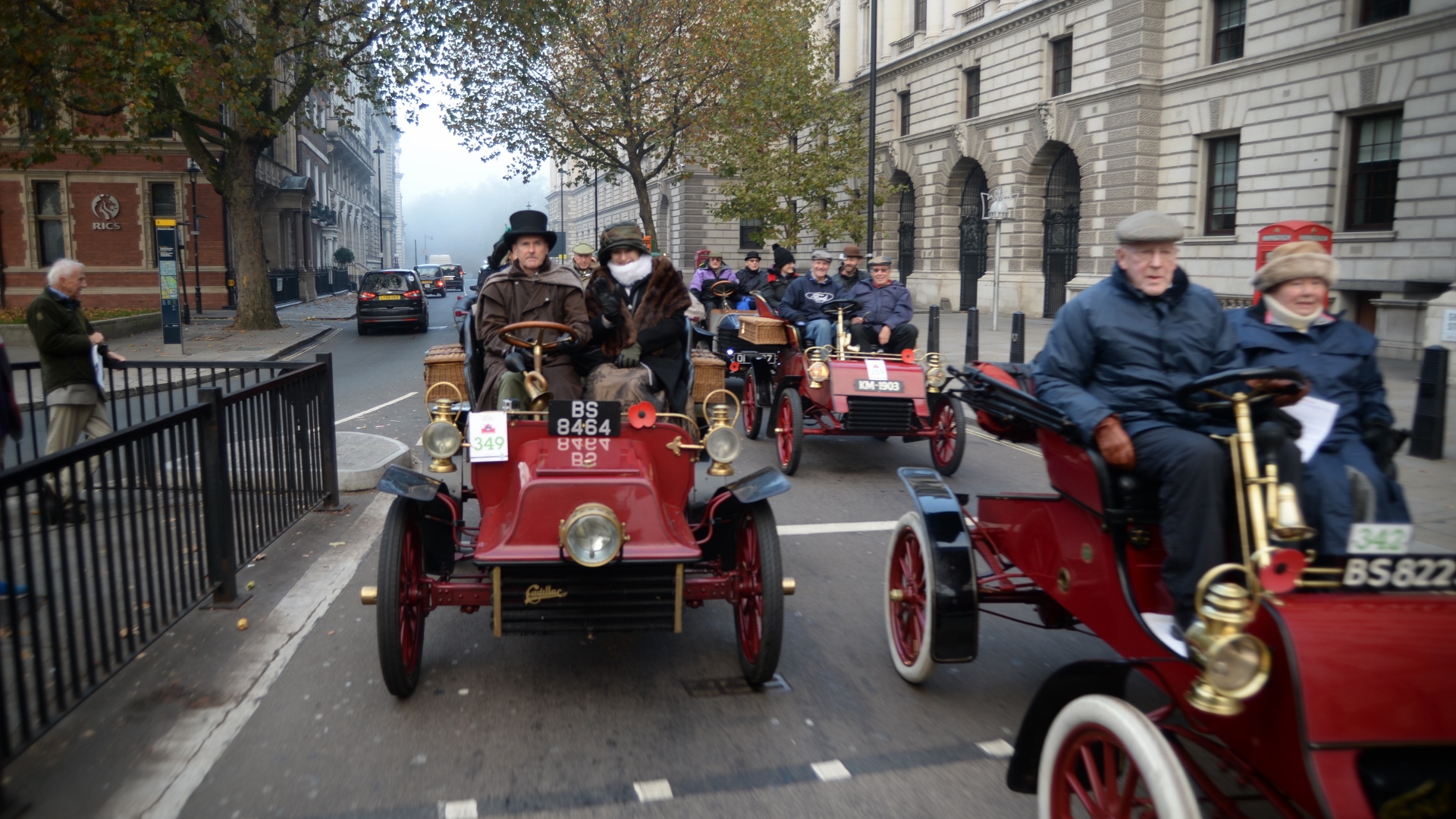 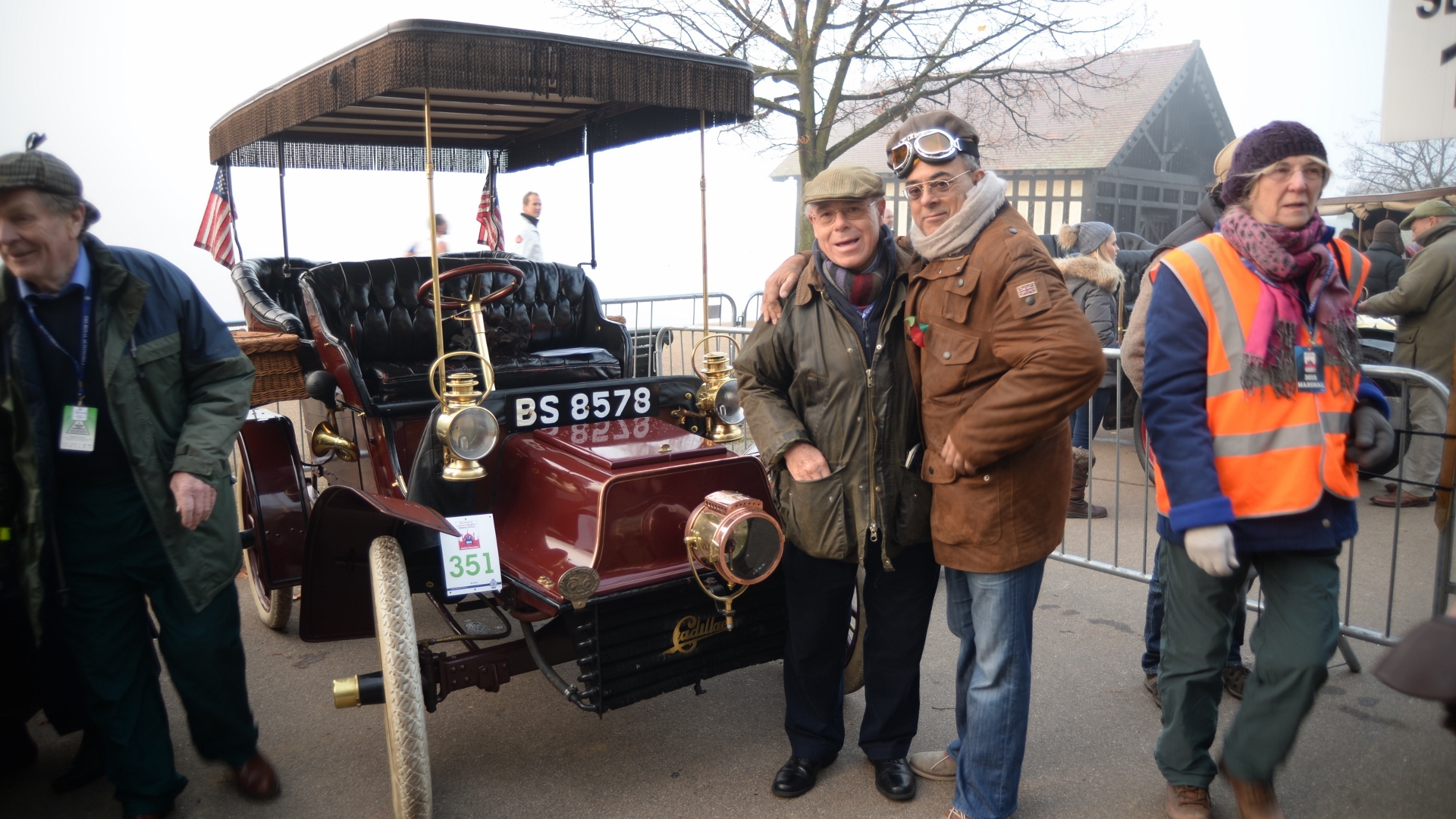 The Bonhams London to Brighton Veteran Car Run is one of winter's great automotive adventures. The oldest automotive motoring event in the world invites cars built before 1906 to dash 60 miles down a two-lane highway, usually through awful weather, from the U.K. capitol to the trendy seaside town.

Watching is entertaining and, at times, hilarious, but participating is a real adventure. To be part of the low-speed action, you need a car built in 1905 or earlier. If you don't happen to have one of those laying about, you will need to buy one.

Bonhams makes it easy to purchase a veteran car by hosting an auction for eligible cars the day before the Run. Prices at this year's auction ran from about $50,000 for a 6.5-horsepower 1903 Stanley Steam Runabout to close to $600,000 for a luxurious 1903 Clement in concours condition. Less-expensive veteran cars are available, but some of them are best suited for skilled mechanics. However, some of the participants at this year's Run told us the less-expensive, lighter, simpler cars are sometimes the most reliable and the easiest to field.

If owning a machine constructed during the dawn of the automobile is not on your list of things to do, perhaps you can scam a ride with someone else. That's what my wife and I did.

Just a few months after we had moved the London to Brighton Run high on our bucket list, our friend Nick Grewal invited us to ride along in his 1905 Cadillac. Naturally, we jumped at his generous offer.

Grewal loves his old car. Though a serious Formula Junior racer, he never seems to stop laughing when he's around his 1905 Cadillac, which is understandable because there is so much to laugh about. Starting one of these cars is always humorous, and a herd of them jockeying for position at 10 mph leaves everyone in stitches.

Period clothing was worn by many, including Grewal, who was clad in top hat and fur coat. The day before the Run, he arrived with a vintage music player (as well as period vinyl) to create even more atmosphere in the parc ferme on Regent Street, a block down from Piccadilly Circus.

Veteran cars are a reminder that electric cars are not new. Power for roughly a third of the 450 cars entered in the Run came from electric motors, a third used gasoline engines, and a third used steam engines. One entry was a rolling cartoon, a steam-powered 1896 Salvesen that featured a boilerman furiously shoveling coal into a boiler mounted on a trailer as the rig flew down the road trailing thick black smoke.

Pink Floyd drummer Nick Mason and Formula 1 team principal Ross Brawn participated in this year's Run, but anyone who owns one of these cars is considered a celebrity by this crowd.

Dating back to November 1896, the Run celebrates the abolishment of a law requiring all cars be preceded by a man on foot waving a red flag to warn pedestrians and riders on horseback that a dangerous machine was on the trail. To commemorate this, a red flag was ceremoniously ripped in half at the start of the Run, which began in a densely foggy Hyde Park.

Many of the roughly 450 veteran cars each year attempting the Run experience problems along the way and attrition is high, particularly in the early stages. The veteran cars cruise along surprisingly well, but they are not good at stopping or taking off, so they often overheat when they have to sit in stop-and-go traffic.

Grewal's attention to the job at hand showed us that operating a 1904 Cadillac is more challenging than operating a 2016 model. He drives his car at the limit, always going the fastest he can for the given situation. Braking performance being what it is, this requires constant attention. Keeping the Cadillac engine running at its optimum demands the driver carefully adjust ignition timing, advancing and retarding it with a lever as conditions allow, and choosing the best gear from a choice of two.

Anytime things were going swimmingly, Grewal had the power down, all eight horses of it. It turns out that 27 mph can feel quite thrilling, scary even, from your perch high atop one of these horseless carriages. Our death-defying 27 mph top speed was usually attained in a downhill run in the rain, whereupon our thoughts turned to hard tires with contact patches the size of your pinkie nail. Biting the ditch at any speed in one of these cars is not a good idea, particularly with the ladies riding along, dressed to the nines in the finest of hats and tweeds.

That did not happen to us, however. We made it to Brighton in about four hours, well within the six-hour window required for an official finish. There were some regularity runs and other challenges along the rally route, but we paid them no mind. We have no idea who won, and no one seemed to care. At the finish were drinks and chili and much back-slapping and laughing as everyone celebrated triumph in the face of adversity.