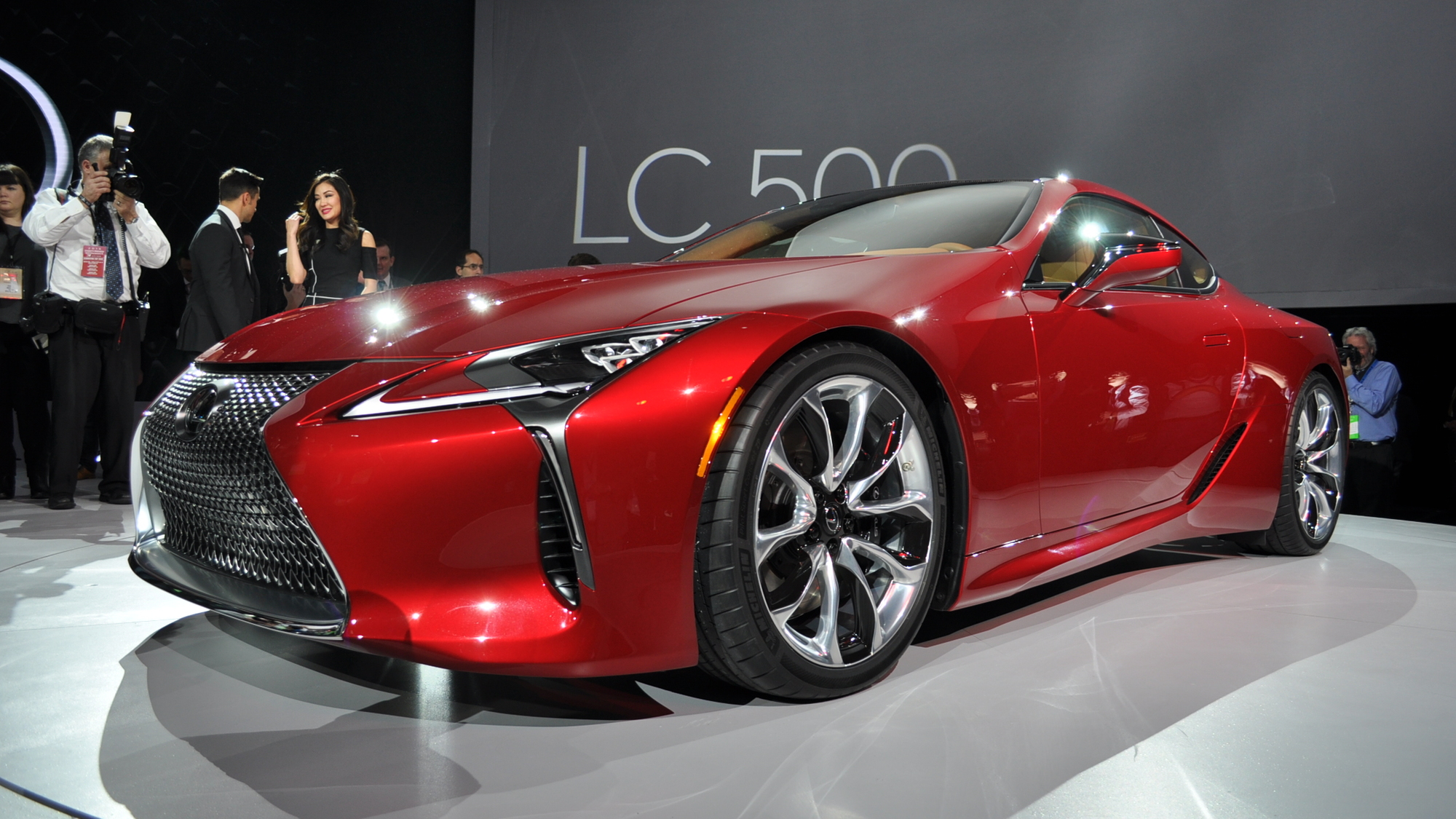 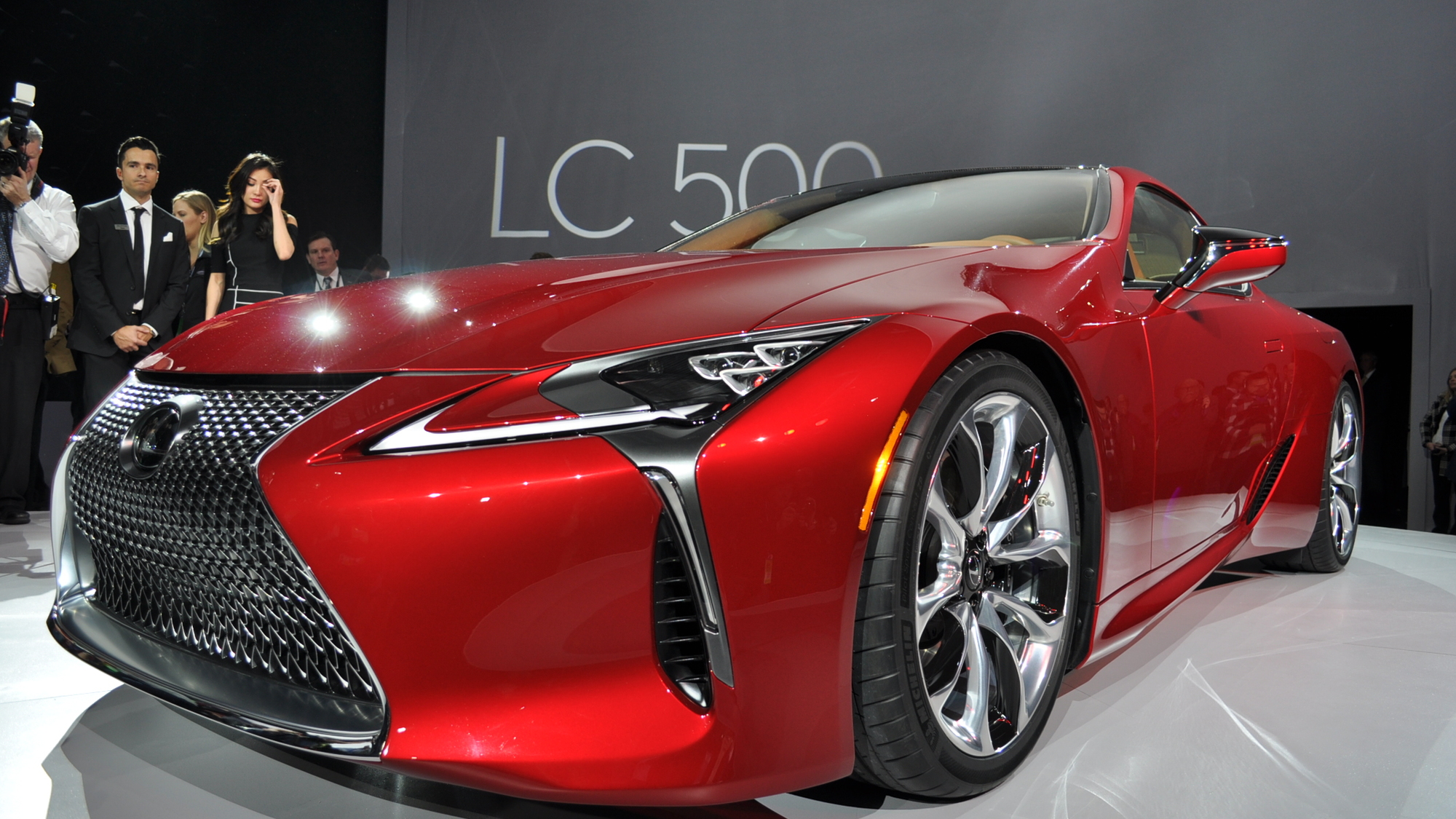 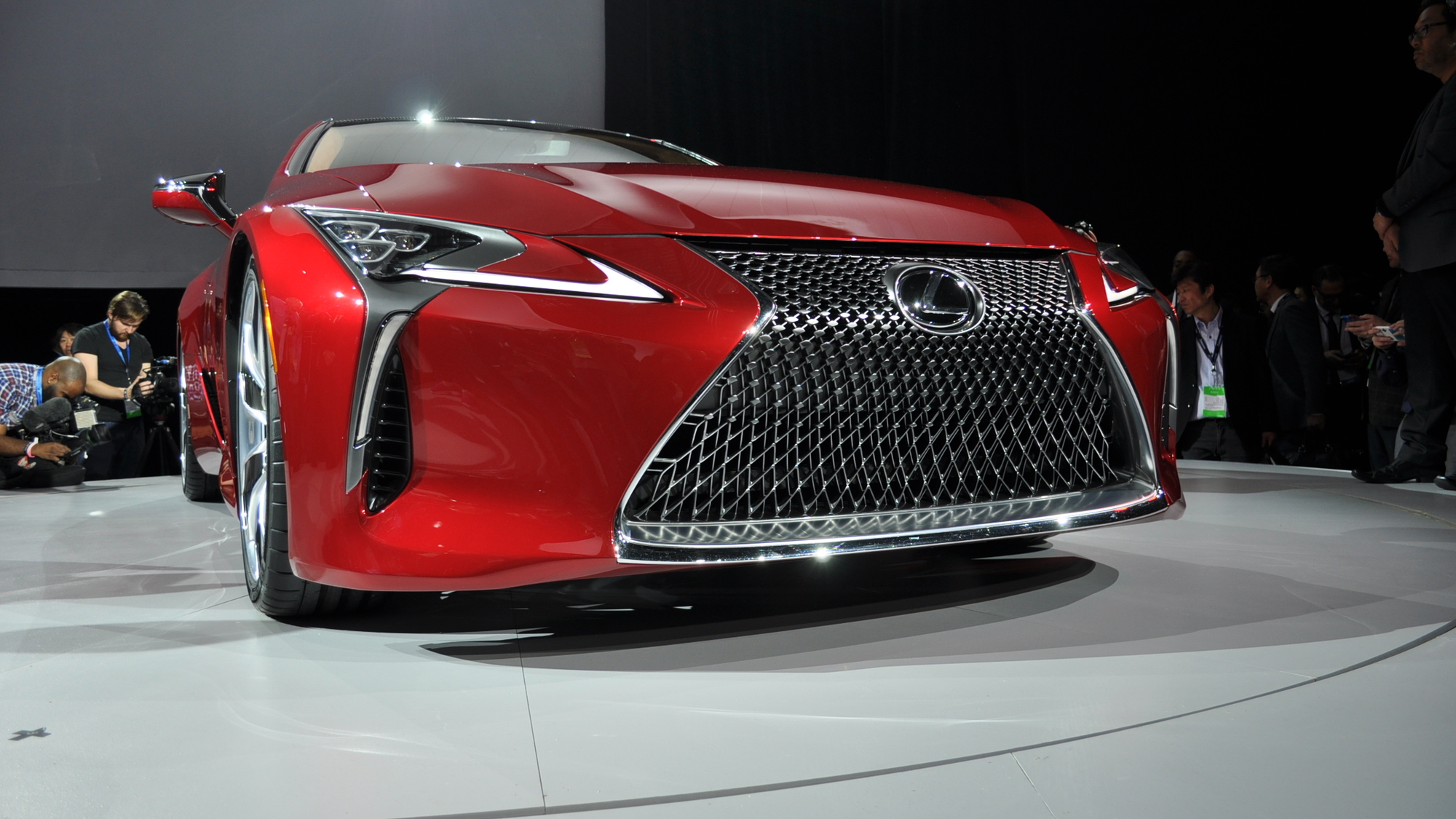 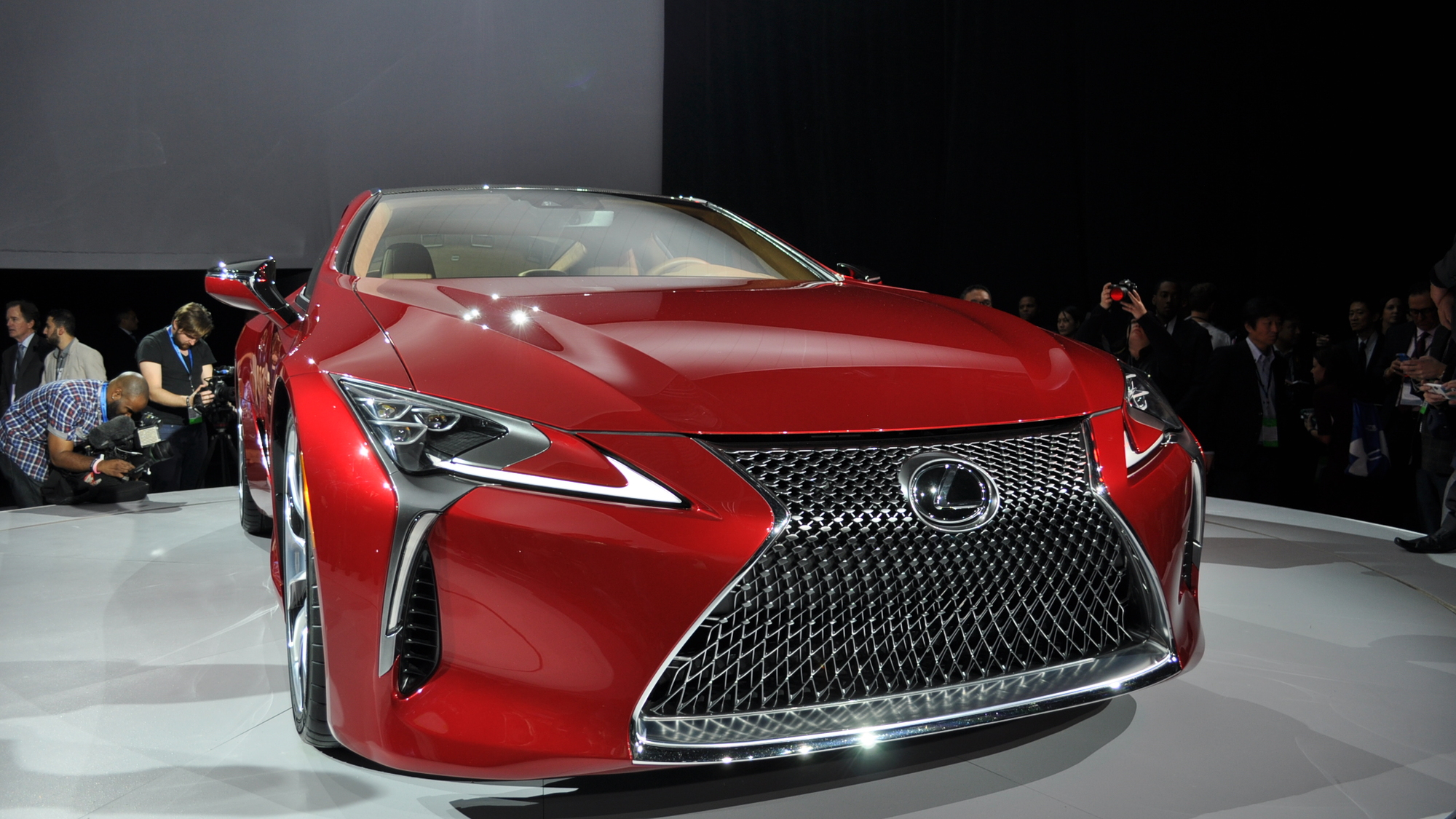 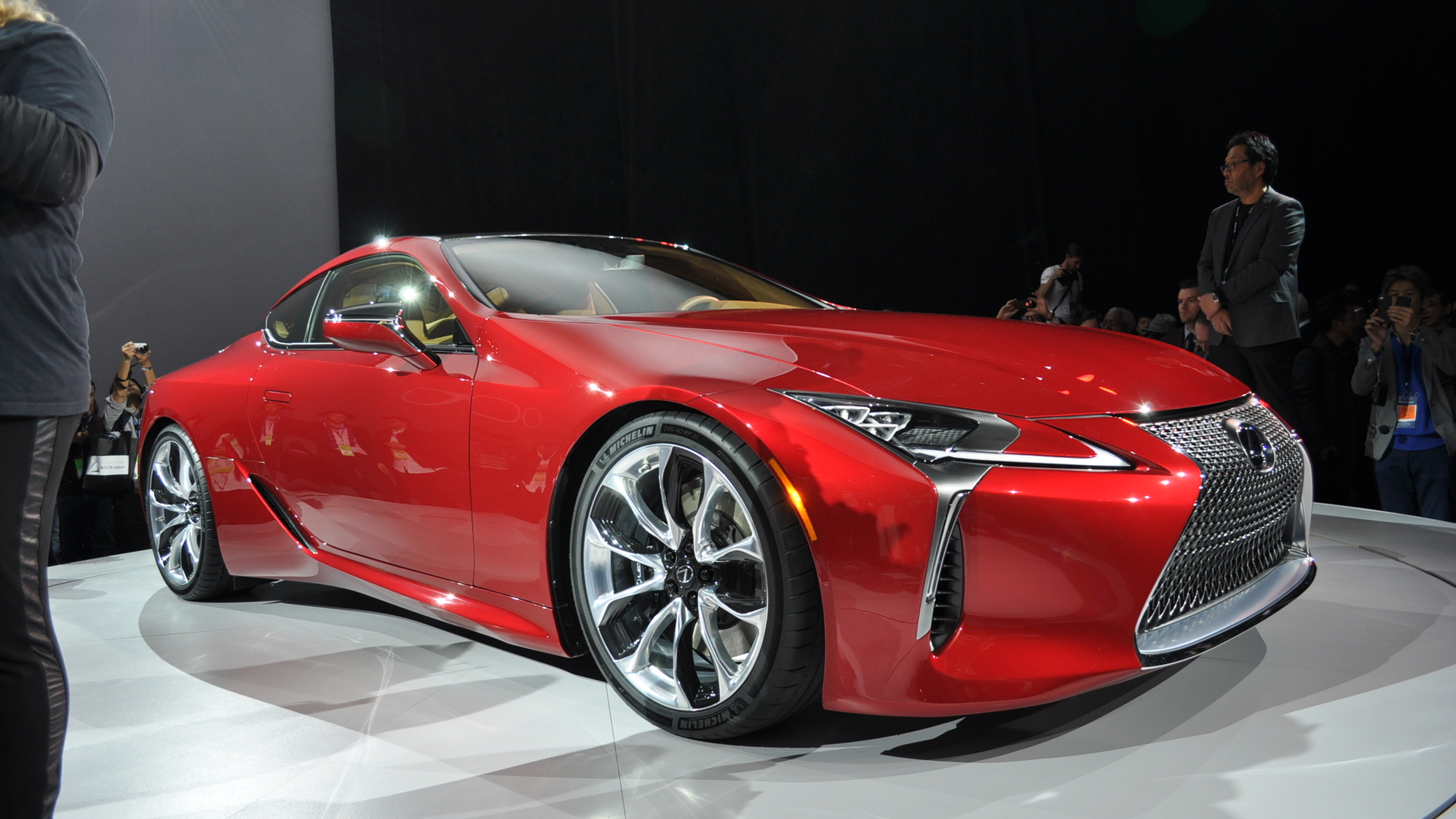 It was at the Detroit Auto Show back in 2012 that Lexus first stunned audiences with the original LF-LC concept. The sexy two-door proved such a hit that almost immediately after the reveal Lexus managers were already hinting at production. Now the production version of the LF-LC concept has been revealed, arriving in the form of the 2018 Lexus LC, on show this week at the 2016 Detroit Auto Show.

The arrival of the LC is hardly a surprise. There have been numerous official hints and prototype sightings over the past year. Thankfully, the LF-LC concept's lines have been transferred faithfully to the LC. The car is a spiritual successor to the SC convertible, though it’s a coupe,  and it serves as a flagship for the Lexus brand alongside the LS sedan.

Right now Lexus has only announced an LC 500, though we expect an LC 500h hybrid variant further down the track. The LC 500 is powered by the familiar 5.0-liter V-8 engine found in high-performance models like the RC F and GS F and delivers an output of 471 horsepower and 398 pound-feet of torque. But while the engine might be old, there’s a lot of new tech making its debut alongside the LC.

The car rides on a new rear-wheel-drive platform that's said to be much more dynamic than anything we've seen from Lexus, apart from the LFA supercar. Called GA-L, the platform will eventually form the basis of several front-engined, rear-wheel-drive vehicles from Lexus and also Toyota. The next recipient is likely to be the next-generation Lexus LS.

In an effort to sharpen the handling of cars based on the platform, engineers placed most of the mass, including the engine and the occupants, in a position more centralized and lower in the chassis to improve the center of gravity. For example, the driver hip and heel points have been lowered, wheels have been pushed to the corners of the car with shortened overhangs, and the drivetrain mass has been located behind the front axle line to create a front mid-ship layout. As a result, weight distribution is a near ideal 52/48 front/rear. The overall length is about 187 inches—so it’s mid-size by U.S. standards, and a few inches longer than the RC—while it rides on a 113-in wheelbase; so overhangs are extremely short.

Other mass management measures include an available carbon fiber roof (glass is standard), aluminum door skins mounted to a carbon fiber door inner structure, and a composite trunk floor. The LC 500 also represents the Lexus brand’s most intensive use of high-strength steel. This provides enhanced rigidity while reducing weight. In fact,  the torsional rigidity is more resistant to twisting forces than even the LFA.

Drive is to the rear wheels only, via a new 10-speed automatic transmission. The unit is said to offer gear changes that rival dual-clutch units in shift speed but operates with superior refinement, thanks mostly to a system that reads metrics such as speed, acceleration and gas pedal position and anticipates the next shift. Owners of the LC 500 variant can expect 0-60 mph in less than 4.5 seconds.

Forged aluminum wheels measure 20 in across up front and 21 in at the rear, and they come shod in Michelin Pilot Sport tires. The wheels are attached to a multilink suspension setup which features double ball joints on the upper and lower control arms that are said to offer superior control. Stopping power comes in the form of huge six-piston front disc brake calipers (four-piston in back).

In the cabin, there’s a 2+2 layout. The LC 500 will be available with all-speed dynamic radar cruise control, lane keep assist (to help keep the vehicle from straying from the travel lane), automatic high beam assist, and a pre-collision system that will automatically brake in some situations.

Feature highlights include a standard Pioneer premium audio system, or an available Mark Levinson system for serious audophiles. The LC also marks the debut of a new software system that allows easier updates to the user interface.

Lexus tells us the LC won’t reach showrooms in the United States until 2017, which means we’re likely to see the vehicle arrive as a 2018 model. We’re not sure of the reason for the delay but it could be because the company is waiting for the LC 500h hybrid variant. This one is expected to come with a V-6 paired with a next-generation Hybrid Synergy Drive system and may offer as much as 600 hp.