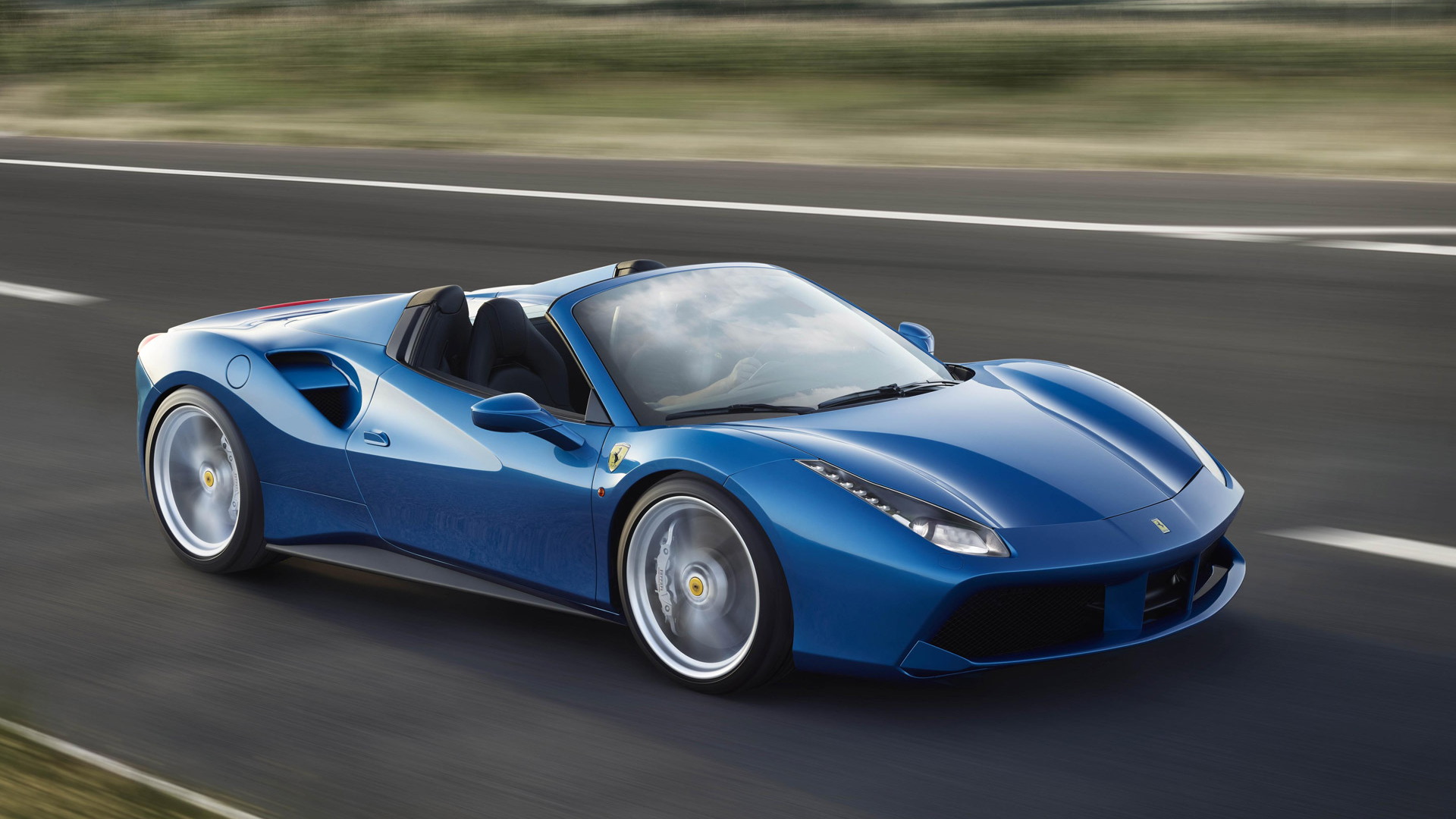 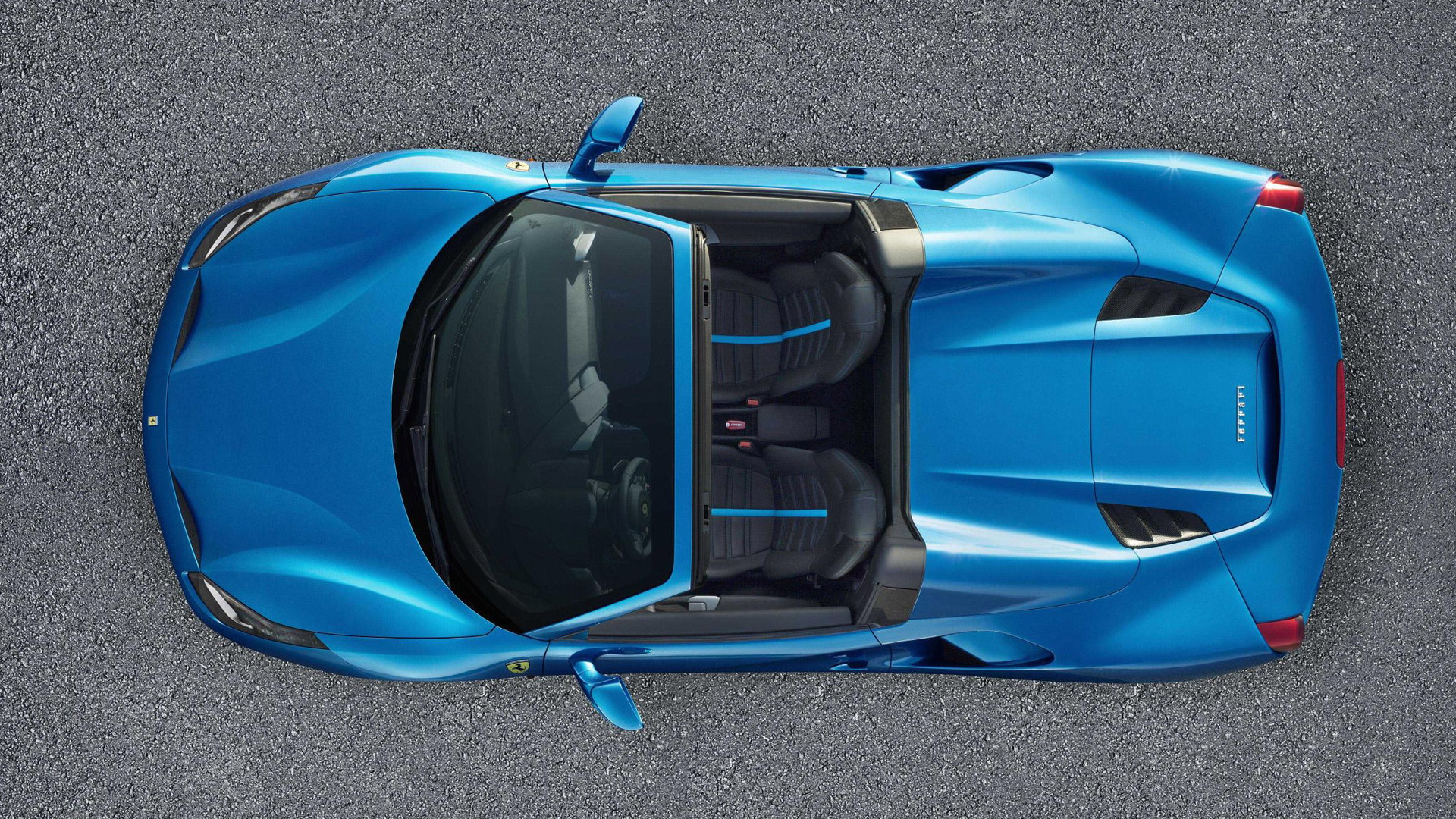 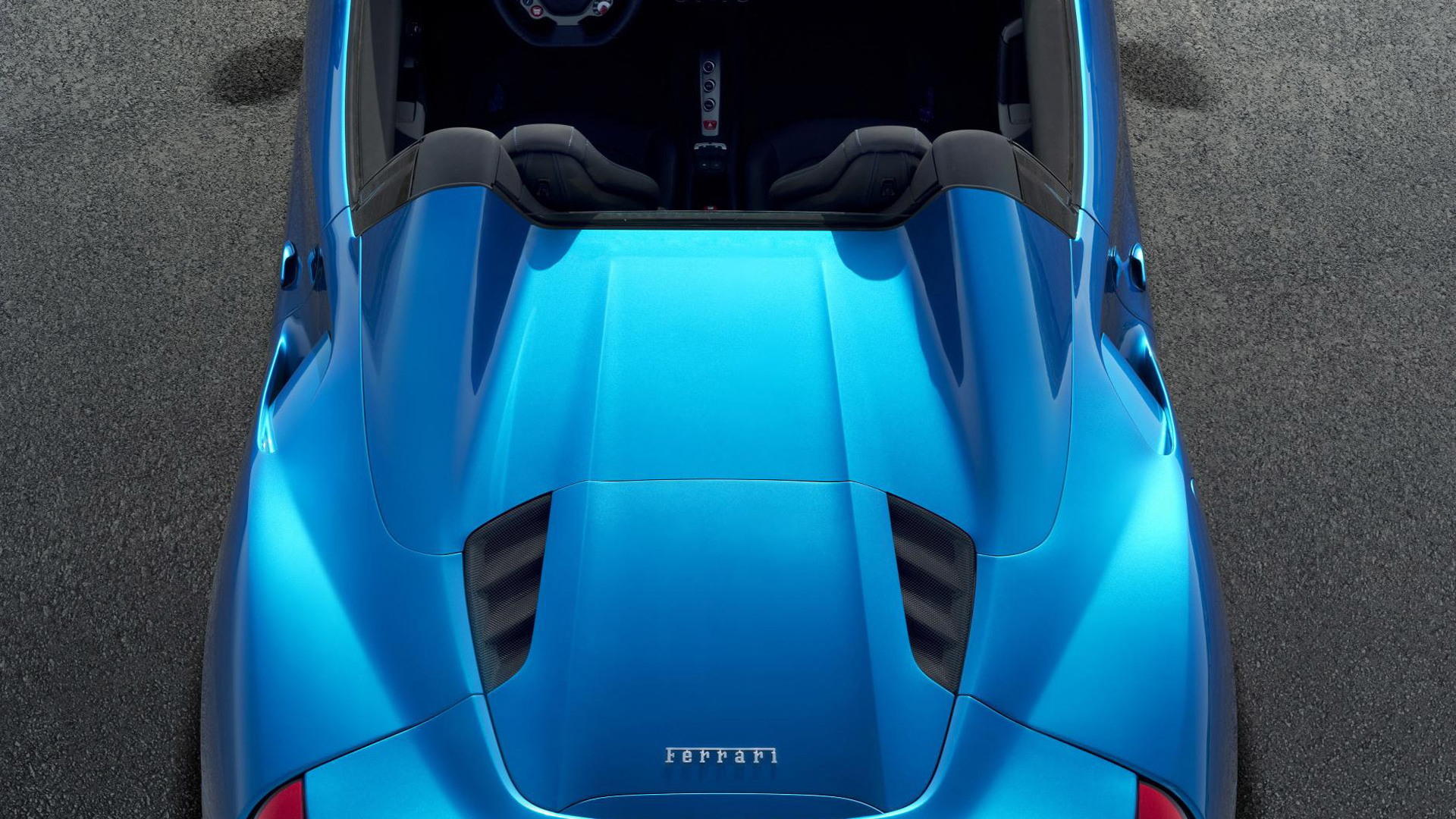 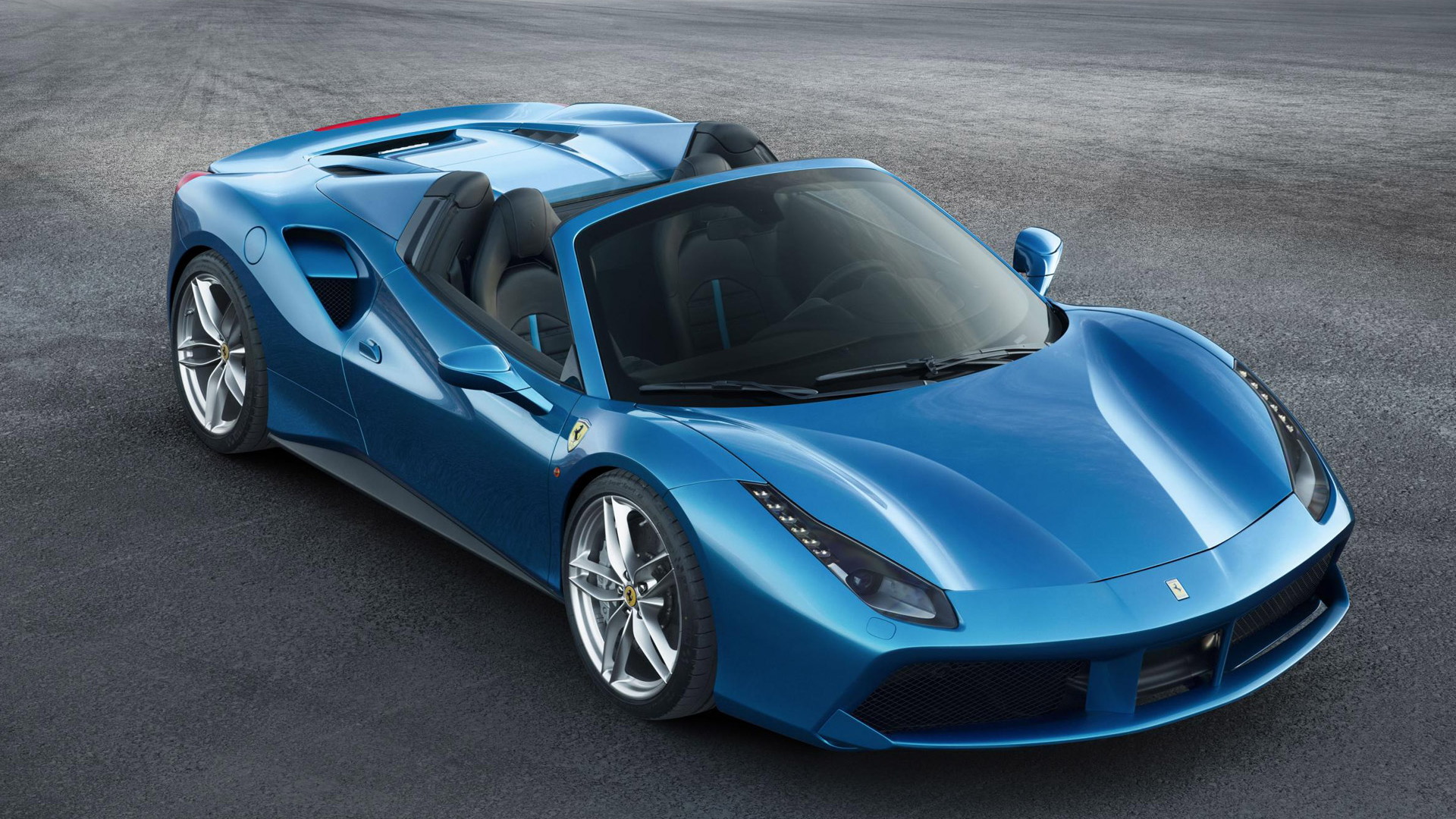 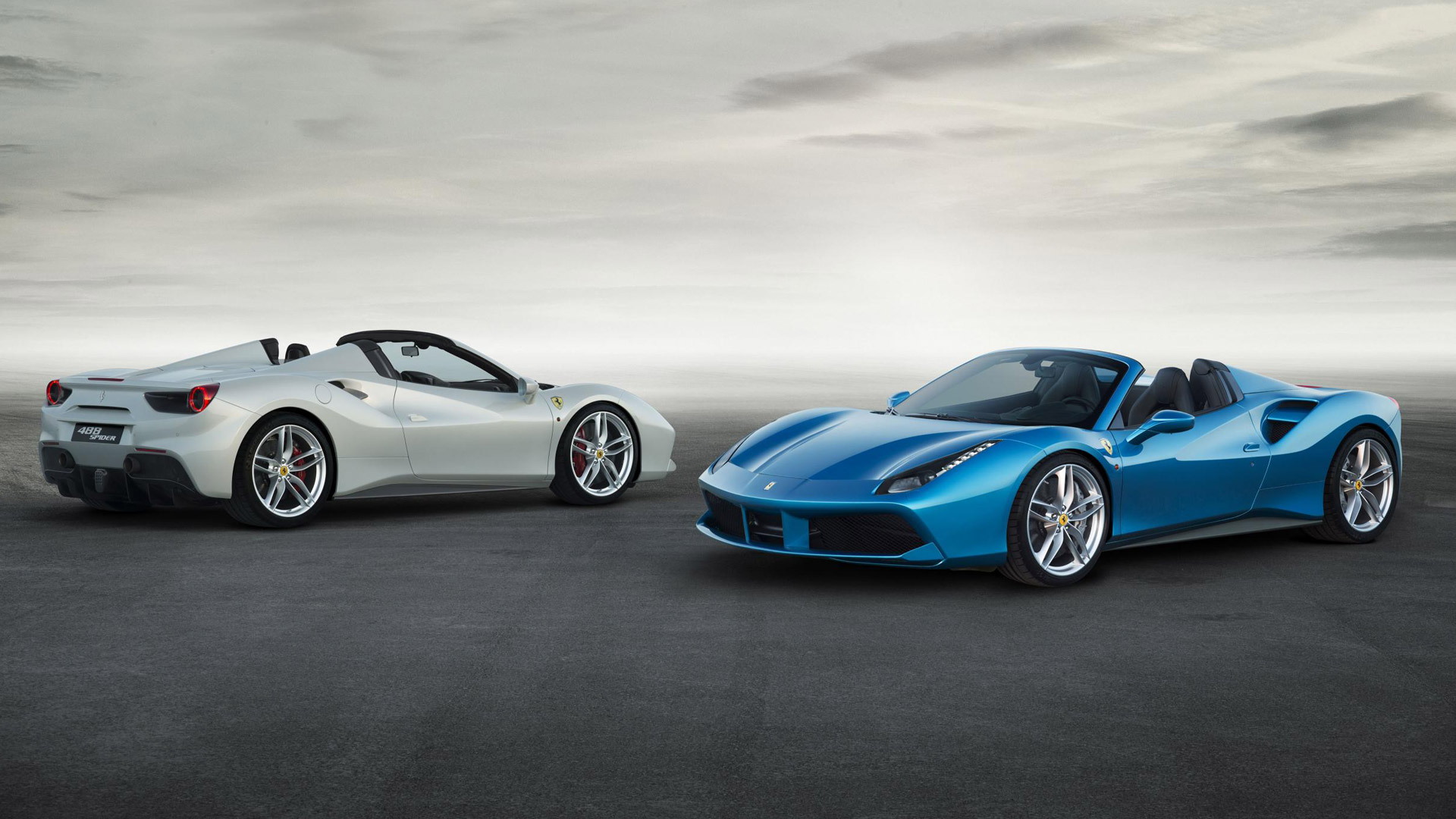 Part of what makes the 488 GTB such a standout new product for Ferrari is that it packs a completely new 3.9-liter turbocharged V-8, making 660 horsepower and 560 pound-feet of torque.

But the other part of it is beauty—a more technical, detail-oriented kind of beauty than that of its predecessor, the 458.

And with the 488 Spider that was first shown at the Frankfurt Motor Show earlier this fall, Ferrari’s mid-engine model took a step away from the curvaceousness of the 458 and became just a little sharper and more deeply sculpted—while managing some downright voluptuous proportions.

We didn’t think the form and figure of this model could get better, and then it did—in the 488 Spider that was first shown at the Frankfurt Motor Show earlier this fall, masking in beautiful double-layer paint plus proper lighting to show off the proportions, creases, and contours. 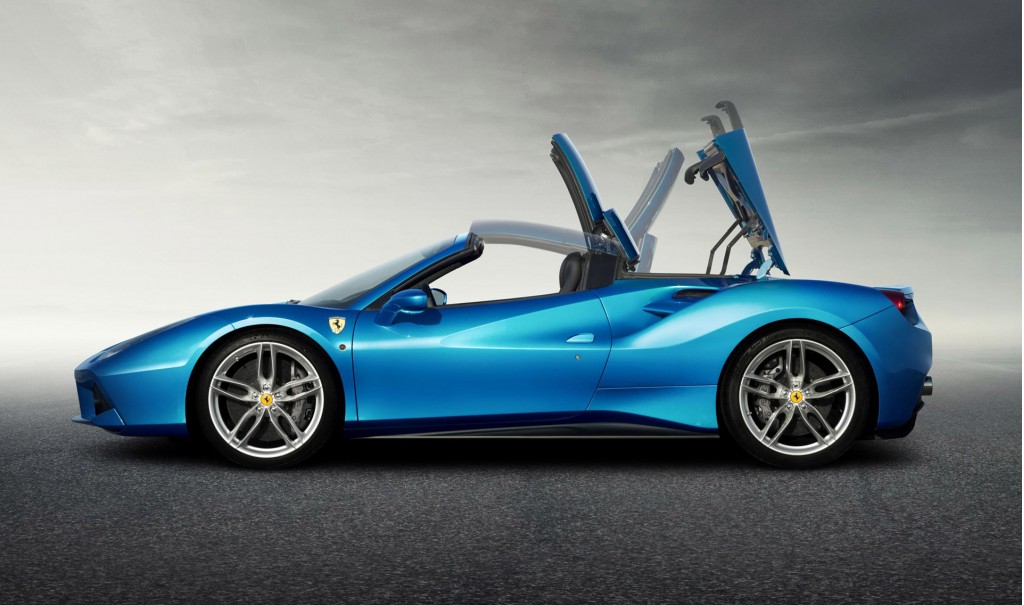 The 488 and its top-down Spider variant remain built on an aluminum spaceframe chassis, with a seven-speed dual-clutch transmission delivering power to the rear wheels, with the help of an electronic rear differential.

In addition to the turbocharged engine, the 488 GTB and Spider get new active-aero components, plus a new Side Slip Control 2 handling feature that allows amateur racers a little more leeway without getting into trouble.

Earlier this fall at the Frankfurt show, we took a look with Michele Comelli, Product Marketing for Ferrari SpA, and asked him to pick out five up-close cues that reconcile beauty and functionality on the 488 Spider:

The elegant-yet-sporty deep side sculpting and side air intake of the 488 GTB is arguably its most memorable design detail—one that harks back to the 308 GTB. Ferrari’s managed to keep it in 488 Spider form, and it’s functional in multiple ways.

Up close, the air intake is divided into two main parts, with a different grille to highlight that different functionality. The lower part is to fit the intercooler. The upper portion, in part, feeds the airbox of the engine, while the second portion is just for aero, funneled to the rear and helping provide streams that “feed the wake” of the car. This is very important because the area just at the tail is a pressure point.

With the 488 Spider, you go without the 488 GTB's long rear window, which proudly displays the V-8; but some might prefer the clean look afforded by the folding hardtop arrangement.

The louvered vents of the engine cover, above each cylinder bank of the engine, bring to mind those of various poster-car exotics of the past; but here they’re great to look at and functional to a degree you might not guess. They’re shaped the way that they are so that airflow passing over will create a vortex that pulls hot air out of the engine bay—increasingly so with speed. “We wanted to do something more three dimensional and useful,” said Comelli.

A rear spoiler that’s not a style spoiler...or a drag

The rear spoiler in the 458 Spider is smooth and low-key in appearance—and that’s to preserve the elegant look and style.

“You can like a spoiler because it’s aggressive, but for a pure style and function it’s not good,” said Comelli. “You generate vertical load but increase drag.”

The spoiler in the 488 Spider follows a simple idea, with the air from the intake diverted into two parts—one of them generating a vertical load downward and the other serving to “feed the wake” of the car and soothe turbulence just behind it, reducing drag.

“It keeps the back aerodynamic vortex far from the back,” said Comelli, who said that the Spider sets a new record among cars in its class for aerodynamic efficiency. “It’s simple, and we haven’t used movable flaps or anything like this.”

The 488 Spider has special moving flaps at the rear diffuser. Much like the Drag Reduction Systems (DRS) used in Formula 1, they help cut the car’s coefficient of drag and enable stronger straight-line acceleration.

When they’re closed we have the most vertical articulation; when they open, to 17 degrees, the air flow in back changes completely, not swirling, but moving straight back, cutting drag.

The flaps, which were first used in the 458 Speciale a couple of years ago but now expanded to wider use with the Spider, are controlled not just by the speed but steering, acceleration, and braking inputs, g-forces, and anticipated driver behavior. And when you change the pedal input and touch the steering it closes the flaps to increase the vertical load and make the vehicle more stable.

“If you’re on the long straight at high speed, it opens the flaps, because at high speed on a straight you don’t need all that vertical load,” said Comelli.

Space to sing out

The wide mesh space alongside each of the tailpipe exits aren’t just for show, either. They serve to pull air through and help cool the exhaust. “We decided to keep them in a higher position, to free space below and increase the capacity of the diffuser,” said Comelli, ponting to how the lack of a central exhaust outlet allows a central foglamp arrangement as used in the F12 Berlinetta. “And in this space, we also have a better sound.”