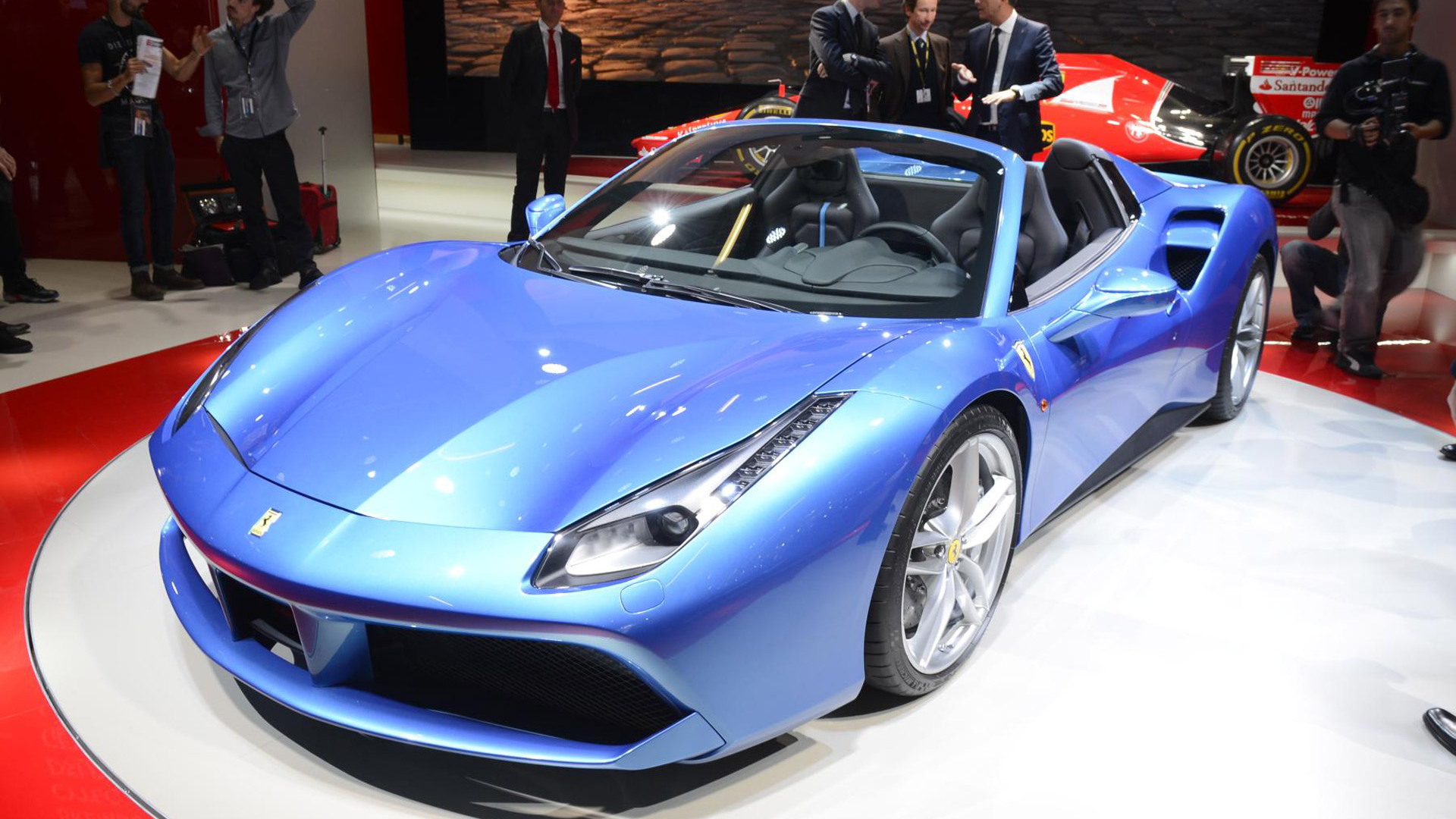 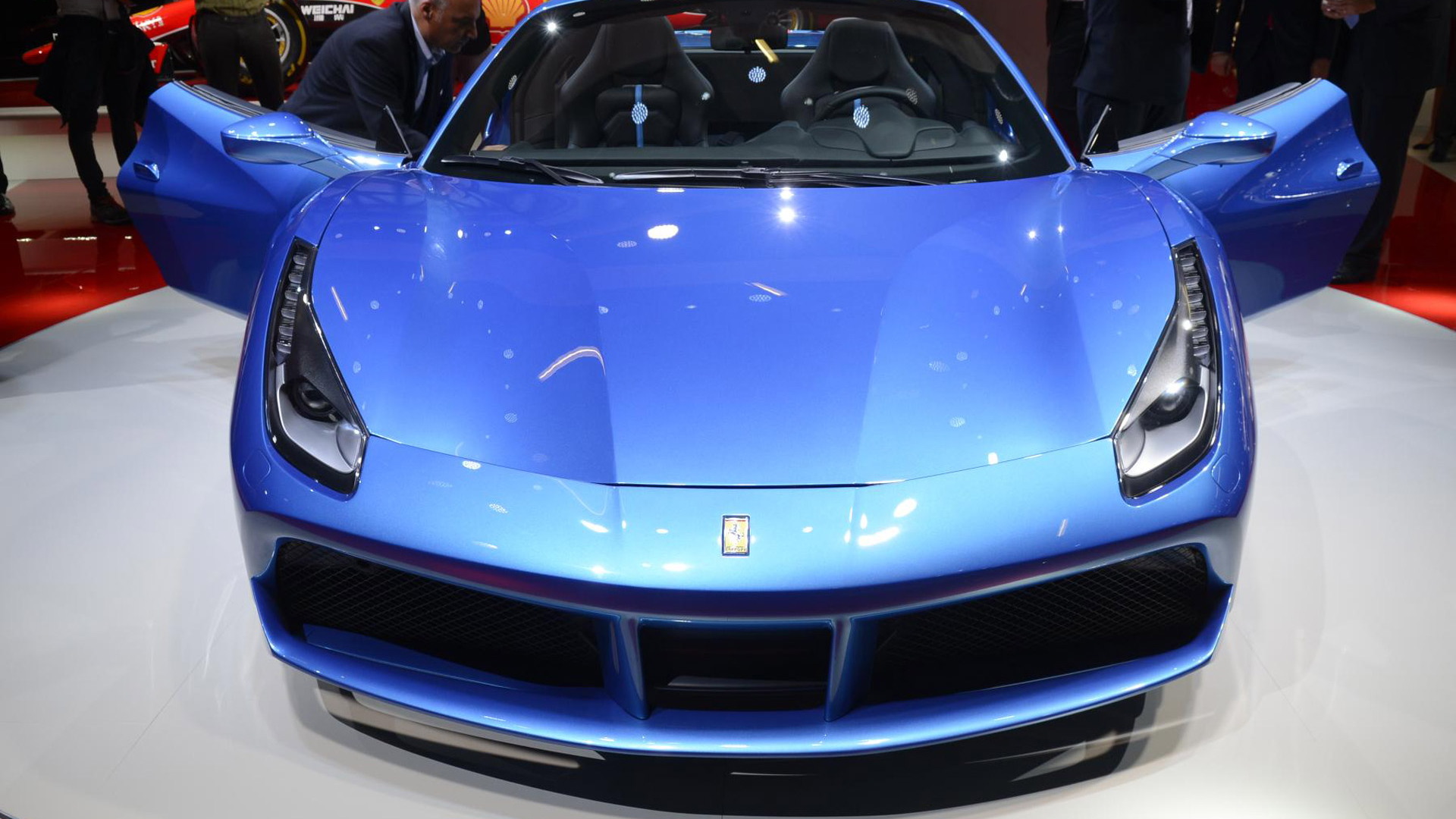 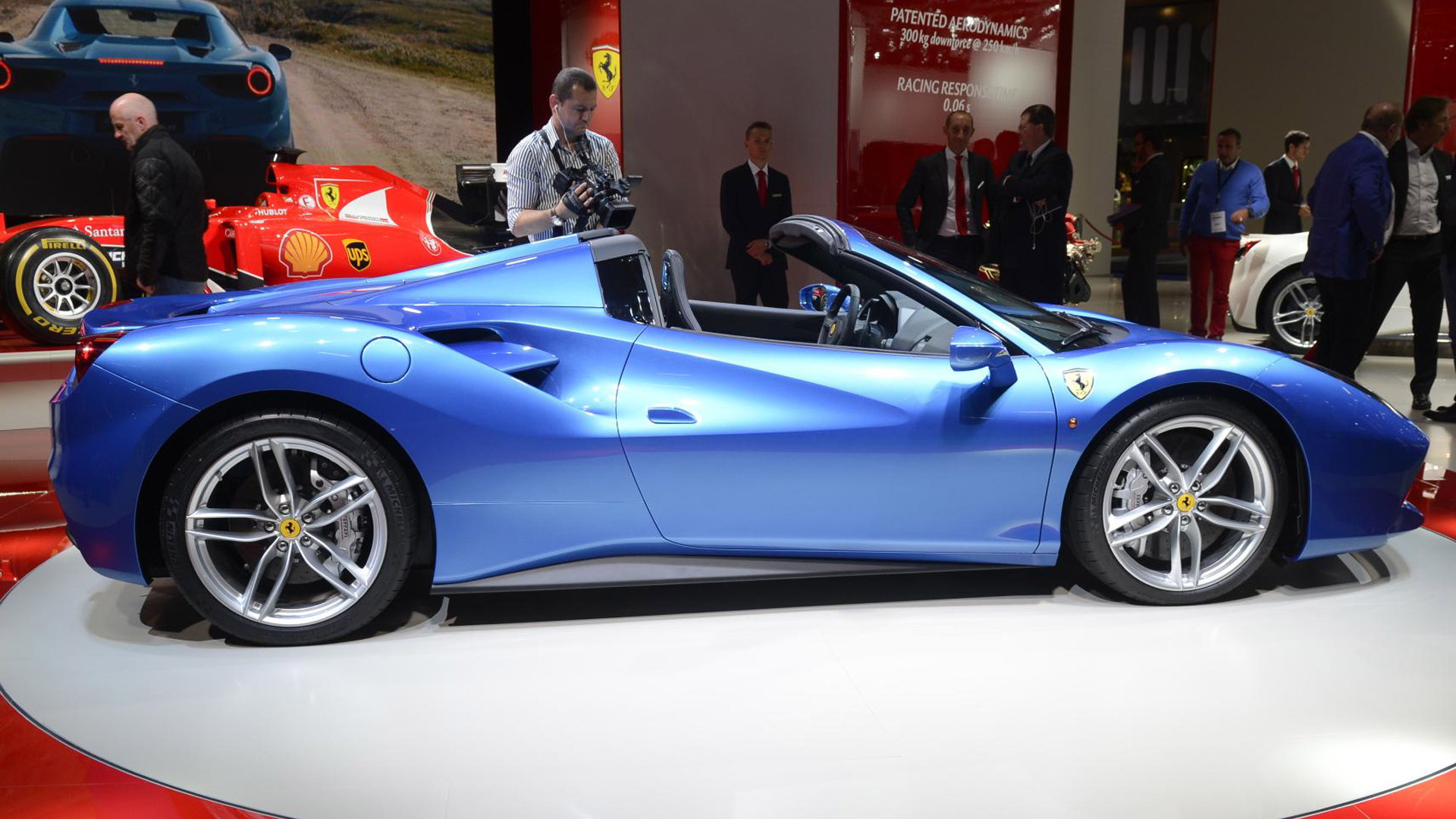 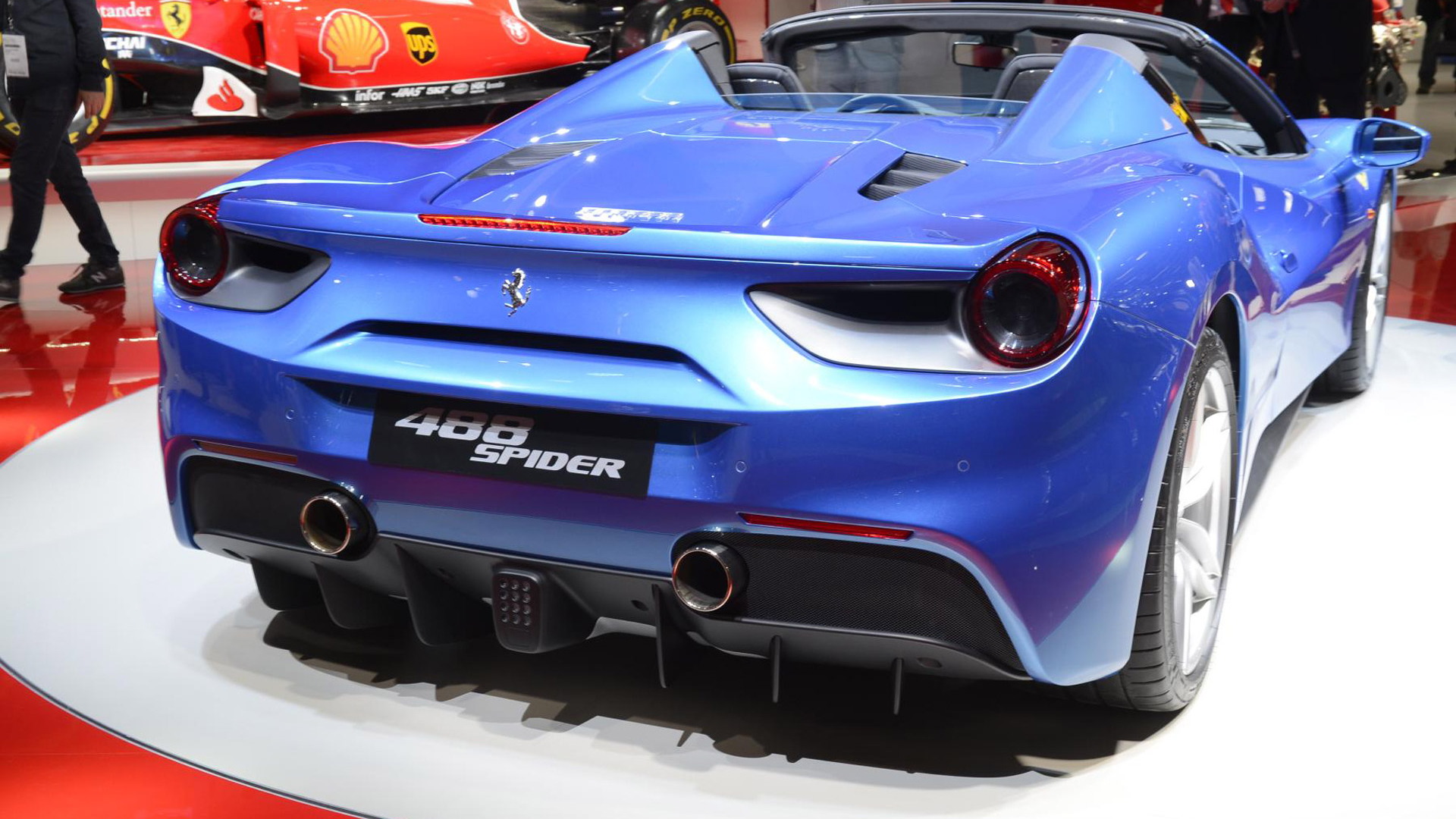 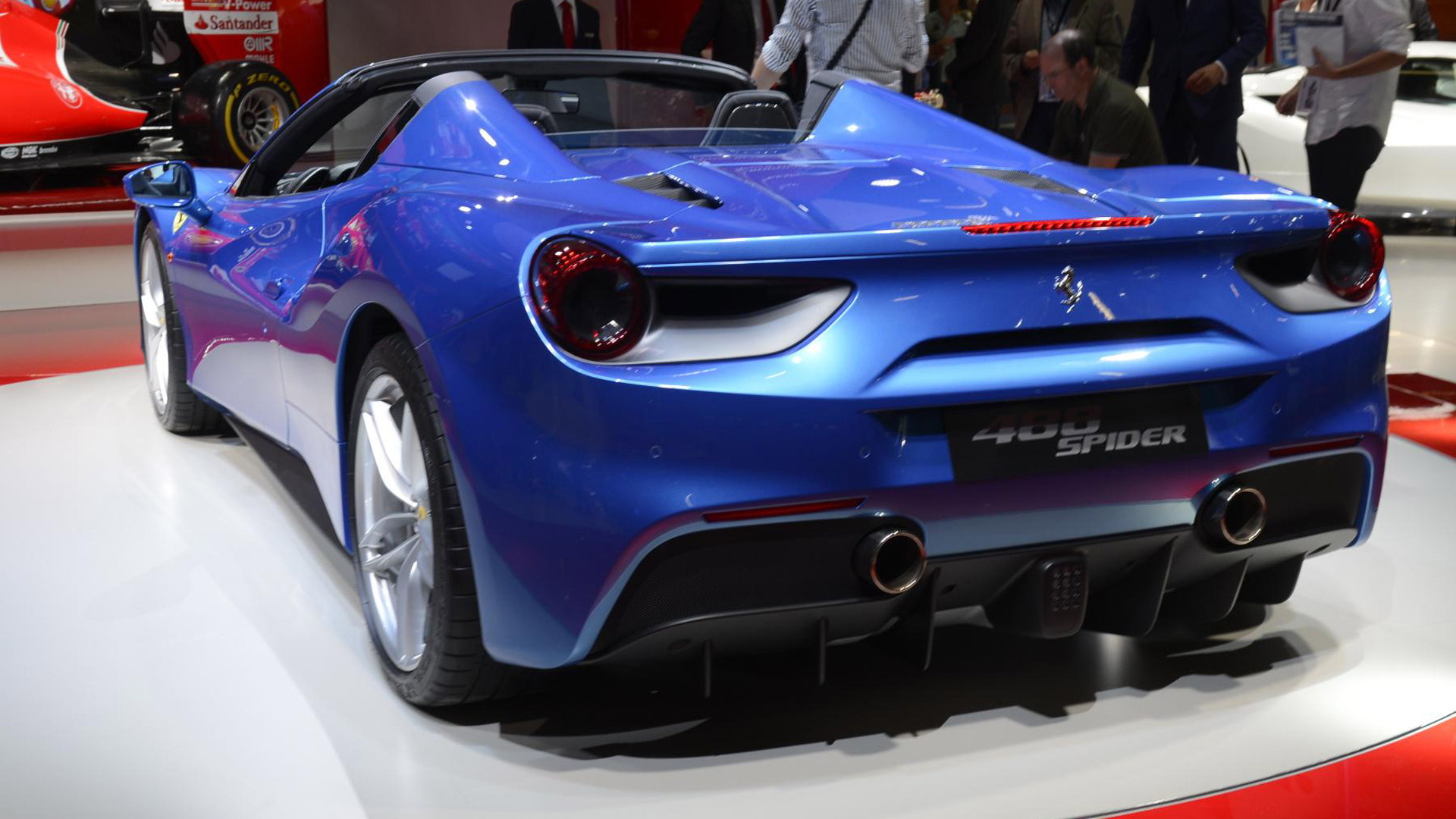 The convertible version of Ferrari’s new 488 GTB has already been revealed as the 488 Spider, and now it’s made its debut on the world stage at this week’s 2015 Frankfurt Auto Show. The new car replaces the mechanically-similar 458 Spider in the Ferrari stable and arrives on the market as a 2016 model.

The shape of the vents on its rear deck looks different to that on the 458 Spider; no doubt they’ve been designed in such a way as to circulate more air around the car’s force-fed mill. The engine, a twin-turbocharged 3.9-liter V-8, is the same unit found in the 488 GTB and here its output is unchanged at 660 horsepower and 560 pound-feet of torque.

Virtually all of the other mechanical bits are common to the 488 GTB as well, such as the aluminum spaceframe chassis, seven-speed dual-clutch transmission, active aero components and Side Slip Control 2 handling feature. Of course, the retractable hard top is unique.

Like the outgoing 458 Spider, the new 488 Spider’s spaceframe is composed of a number of materials that ensure the car’s torsional rigidity and beam stiffness remains identical to the fixed-roof model. Ferrari says the chassis is made of 11 different aluminum alloys containing varying percentages of magnesium to maximise the chassis performance.

The roof itself folds backwards in two overlapping sections to rest flush on the engine in a very compact solution. It takes just 14 seconds to go up or down. Better yet, its design has rendered traditional soft-tops obsolete as it is not only lighter but also provides better protection from noise and the elements.

Complex aero elements have also been implemented around the body. These ensure that the 488 Spider is the most aerodynamically efficient open-top Ferrari ever built. Some of the features include a blown spoiler and an aerodynamic underbody incorporating vortex generators. The end result is boost in downforce combined with a reduction in drag—two normally mutually-exclusive objectives.

The aero engineers also took into account factors relating to in-car comfort. The glass wind deflector at the rear, for example, can be adjusted to one of three positions to guarantee maximum comfort when the top is lowered. Other areas of fine-tuning included the magnetic dampers, Side Slip Control 2 system and the steering response. The latter is said to now be just 0.06 seconds, which is an incredible 9 percent improvement on the 458 Spider’s response time.

As for the performance numbers for the car, Ferrari says 0-62 mph acceleration should take place in 3.0 seconds flat, and 124 mph should come up in 8.7 seconds. Top speed will be somewhere in excess of 200 mph.

Also in Frankfurt, Ferrari confirmed that its entire lineup now features Apple CarPlay smartphone integration. For more from the show, head to our dedicated hub.