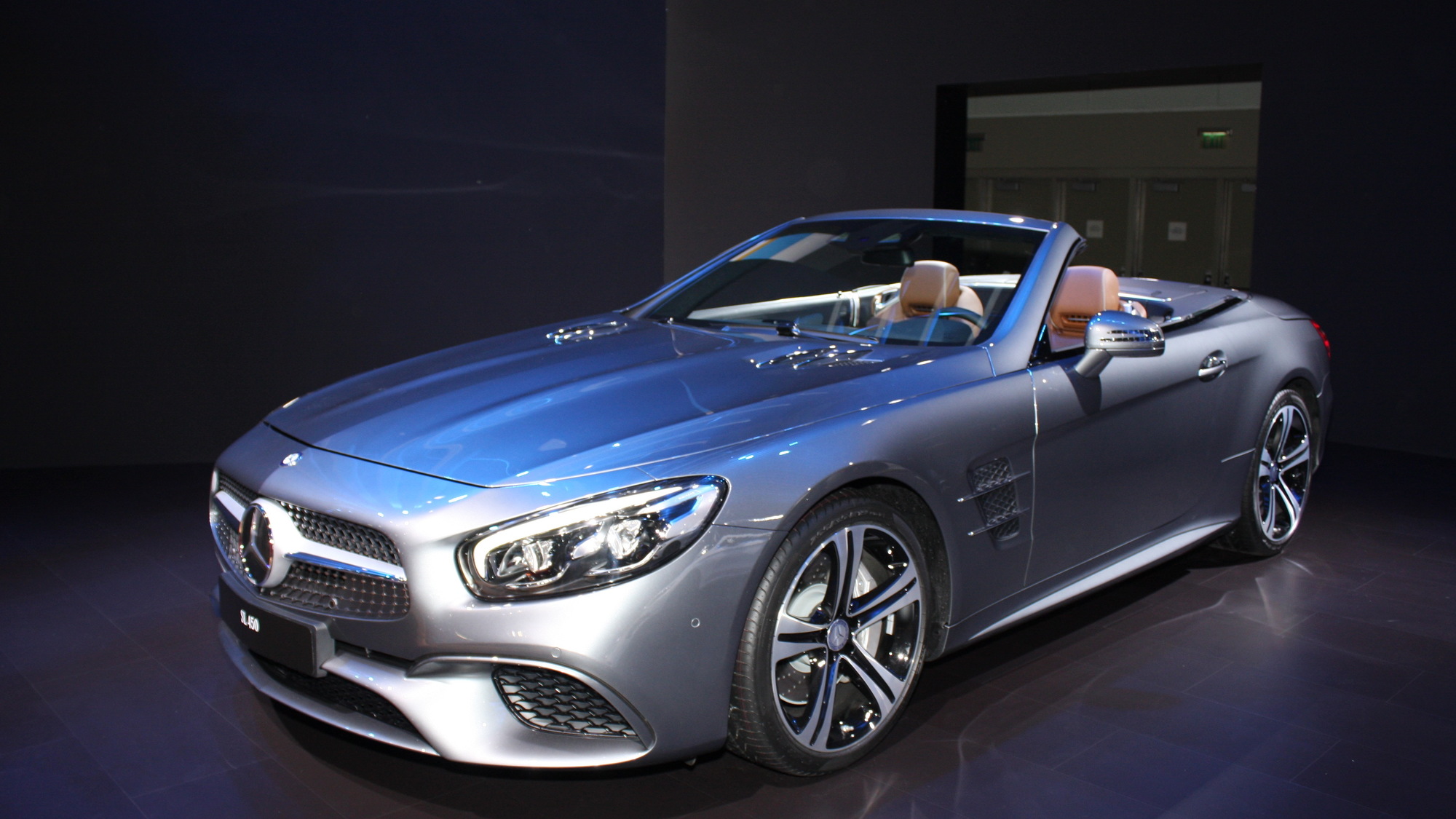 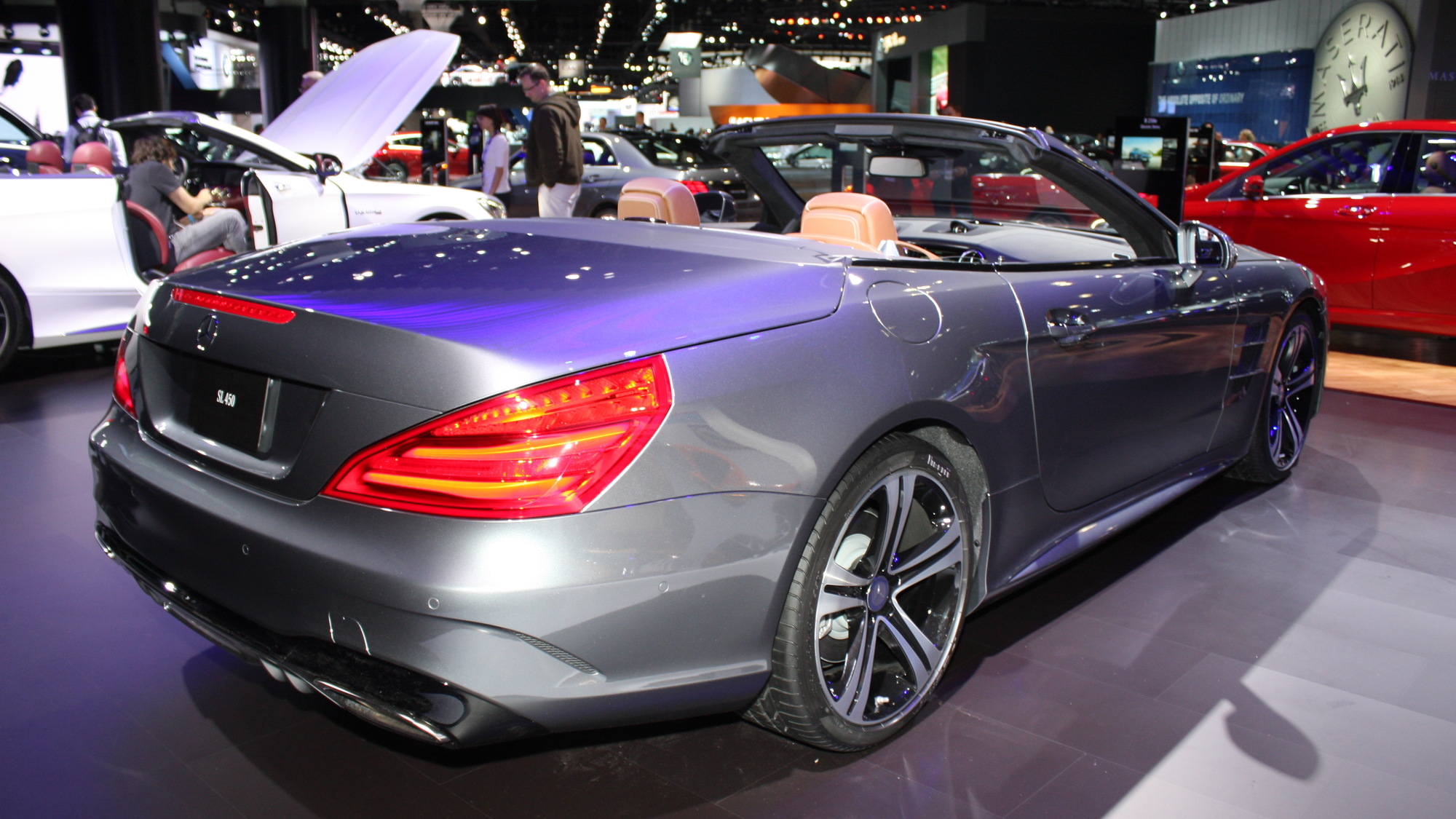 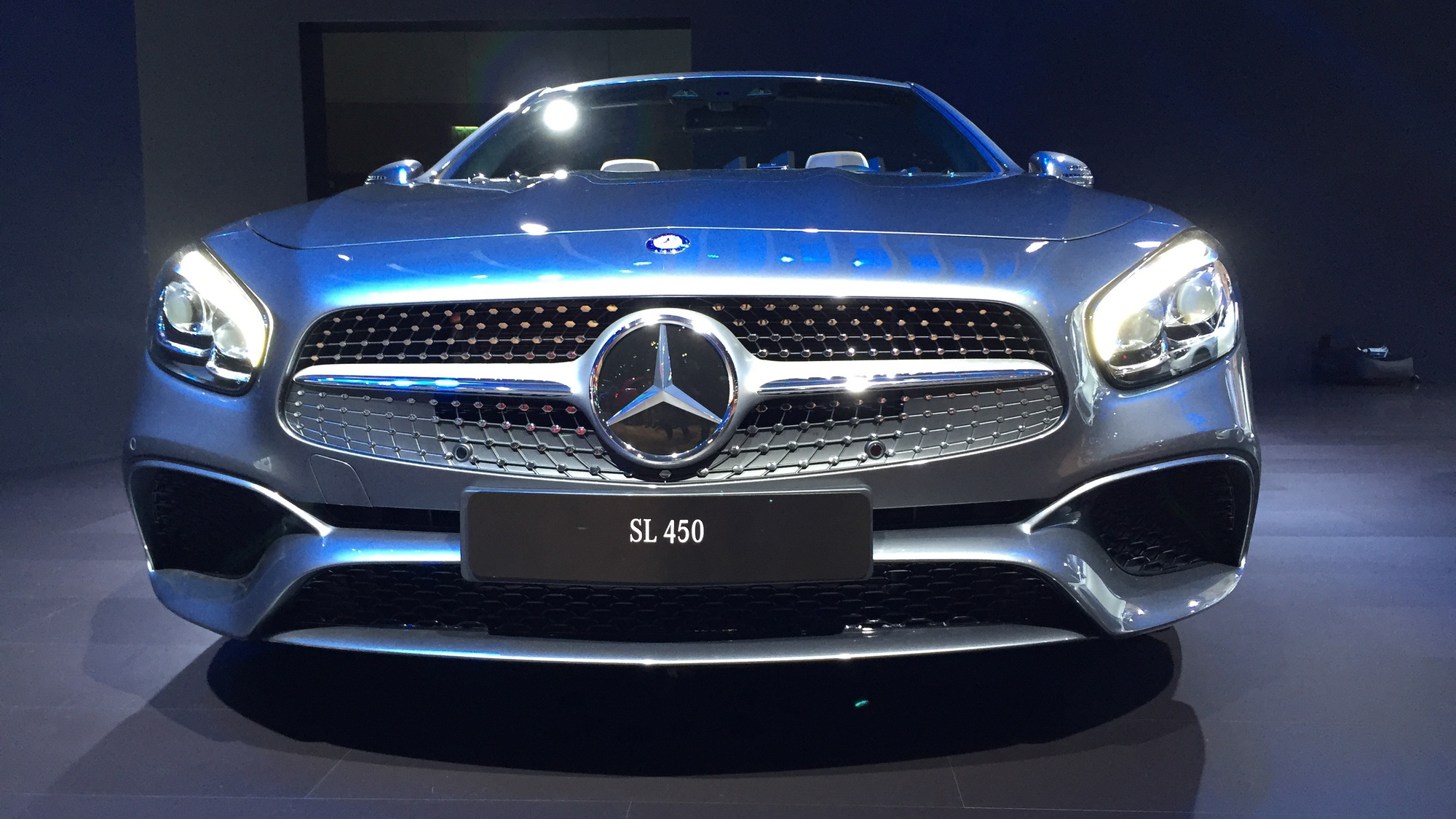 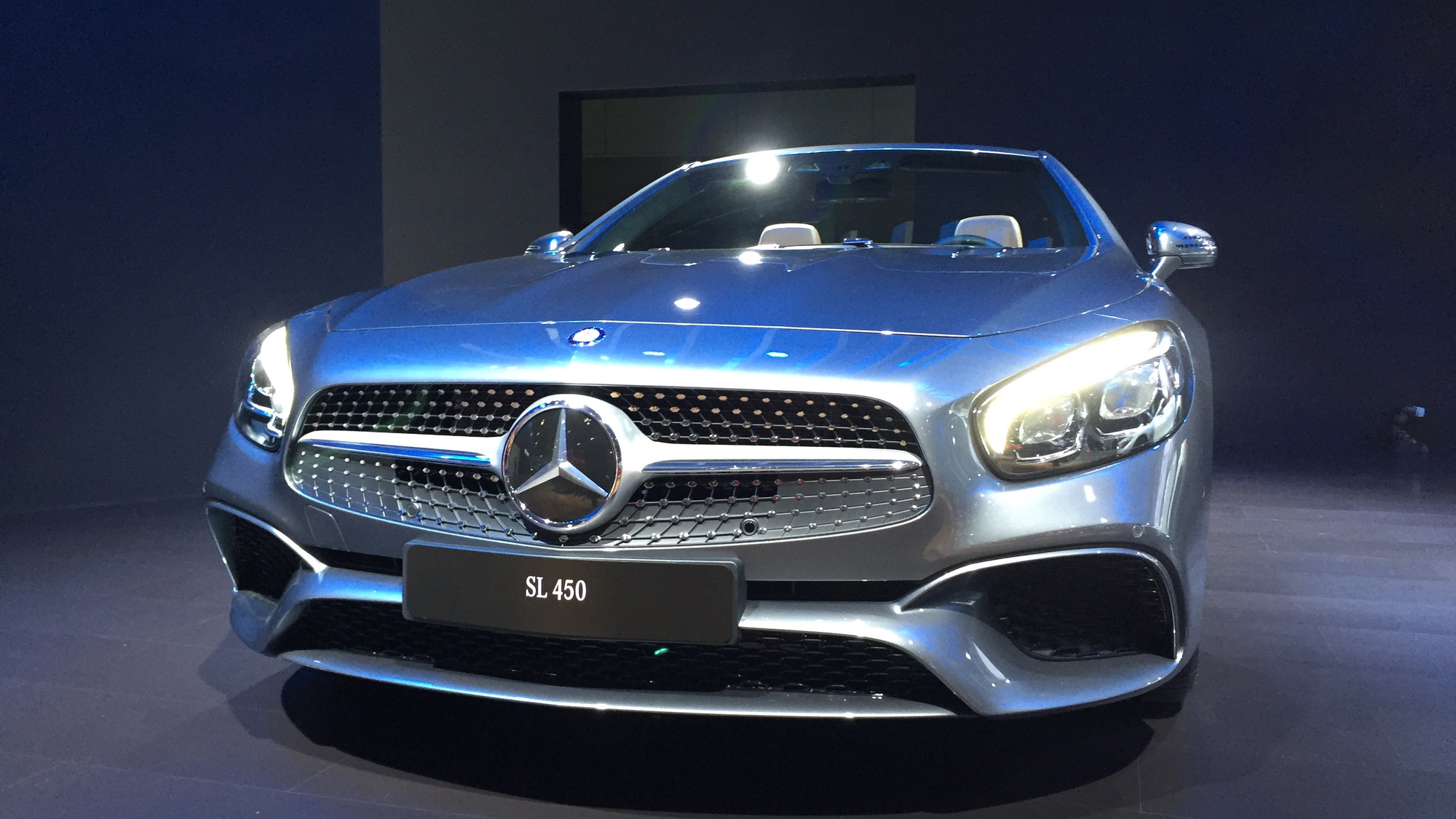 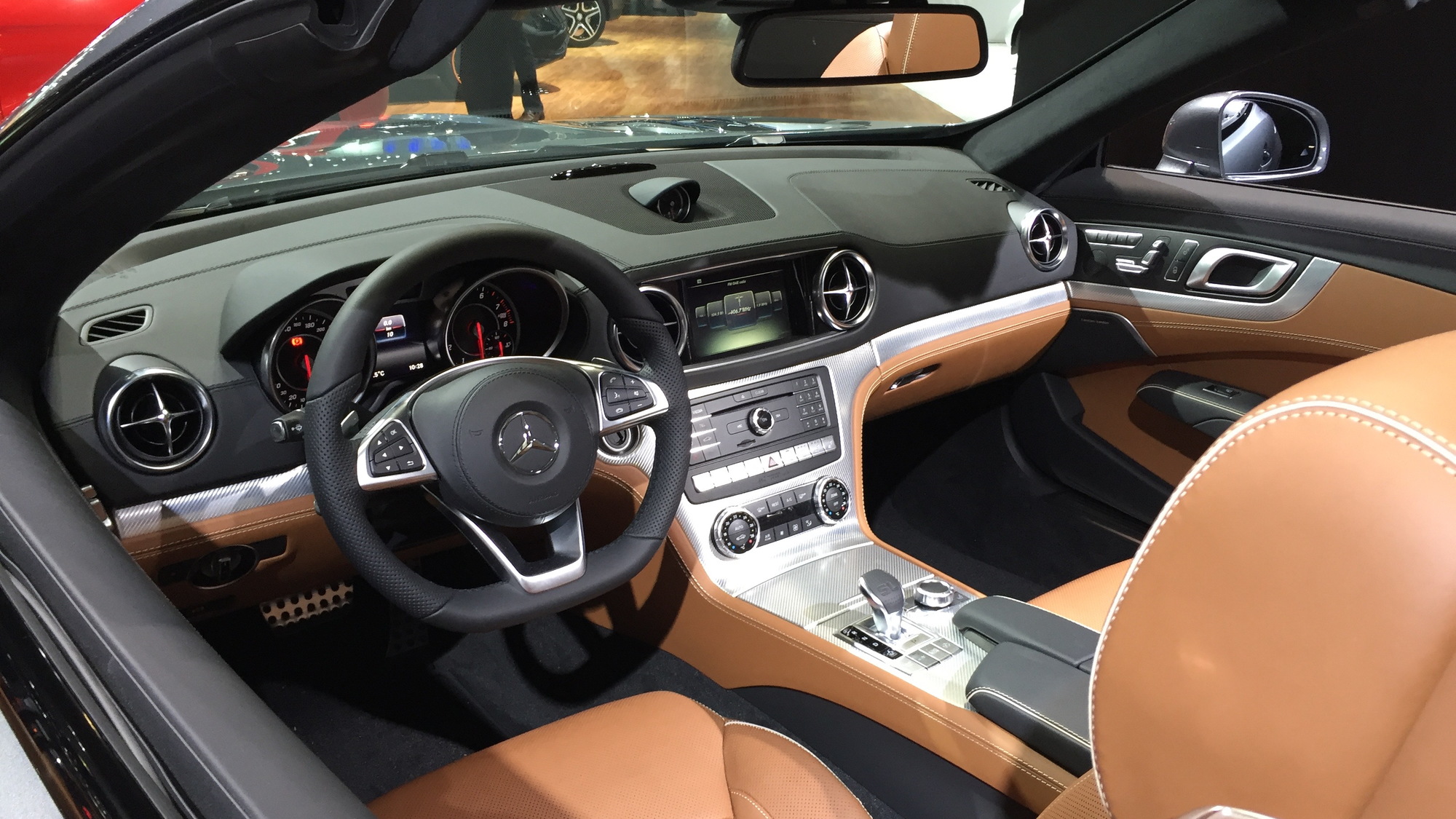 Photos of Mercedes-Benz’s updated SL hit the web last week so we already know about the cosmetic changes made to the car, which feature primarily at the front. Now, however, the car has made its debut at the Los Angeles Auto Show and we have all the juicy details to tell you.

The updated SL goes on sale late next spring, as a 2017 model, and we’re glad to report that more power has been added to the base car. The luxury convertible also benefits from Mercedes’ latest nine-speed automatic transmission, though the Mercedes-AMG sledgehammers stick with their seven-speed Speedshift autos.

Performance of the cars can be adjusted by the standard Dynamic Select driving modes selector. Thanks to this feature, at the touch of a button the driver can adjust numerous vehicle settings such as the setup for the engine, transmission, suspension and steering, ranging from fuel-saving to sports modes.

Steel suspension is standard and features continuously variable dampers, which can be adjusted via the aforementioned Dynamic Select system. As an option, Mercedes offers its Active Body Control with the latest curve tilting function that debuted in the S-Class Coupe and Convertible models. This system helps to reduces body movements when moving off, braking and cornering by adjusting the suspension spring struts constantly via hydraulic means.

The exterior of the latest SL is dominated by the new LED headlights, hood and grille. Inspiration came from the legendary 300 SL Panamericana racing car with its steeply raked radiator grille. The grille on the new SL is more prominent and blends into a sporty, Mercedes-AMG-designed body kit that’s now a standard feature. The kit includes an A-wing design at the front that leads into a splitter matching the body color. Finally, two powerdomes on the hood invoke the sporting heritage of the SL.

The changes to the rest of the car are much more subtle. There have been tweaks made to the tail lights and some of the body panels have been massaged to create a more athletic look. The standard wheels measure 19 inches across and come in a five-spoke design. As for the roof, it remains a retractable hardtop that can be operated at speeds of up to 25 mph.

In the cabin, there is a new three-spoke, flat-bottomed steering wheel with a magnesium structure and ergonomic grip. Twelve control buttons provide access to the menu navigation in the instrument cluster as well as the audio system, phone and voice activation. The main instrument cluster remains a combination of digital and analog elements, and this is joined by a redesigned clock and a new, slightly larger infotainment screen. Apple CarPlay smartphone integration is also available with the addition of the car’s Smartphone Integration package.

Then there are all the electronic safety and convenience features, either standard or available. These include automatic braking, autonomous mode for highways, lane keep assist, parking assist, and blind spot and cross traffic warning. There is also the Pre-Safe Plus system which helps to prevent further injury when hit from behind. The standard audio system is a 10-speaker setup from Harman Kardon. An even more sophisticated sound is produced by an avaialble Bang & Olufsen BeoSound setup with 12 speakers.

Pricing for the 2017 Mercedes-Benz SL range will be announced closer to next year's market launch. In the meantime, find out what else is at the L.A. Auto Show by visiting our dedicated hub.