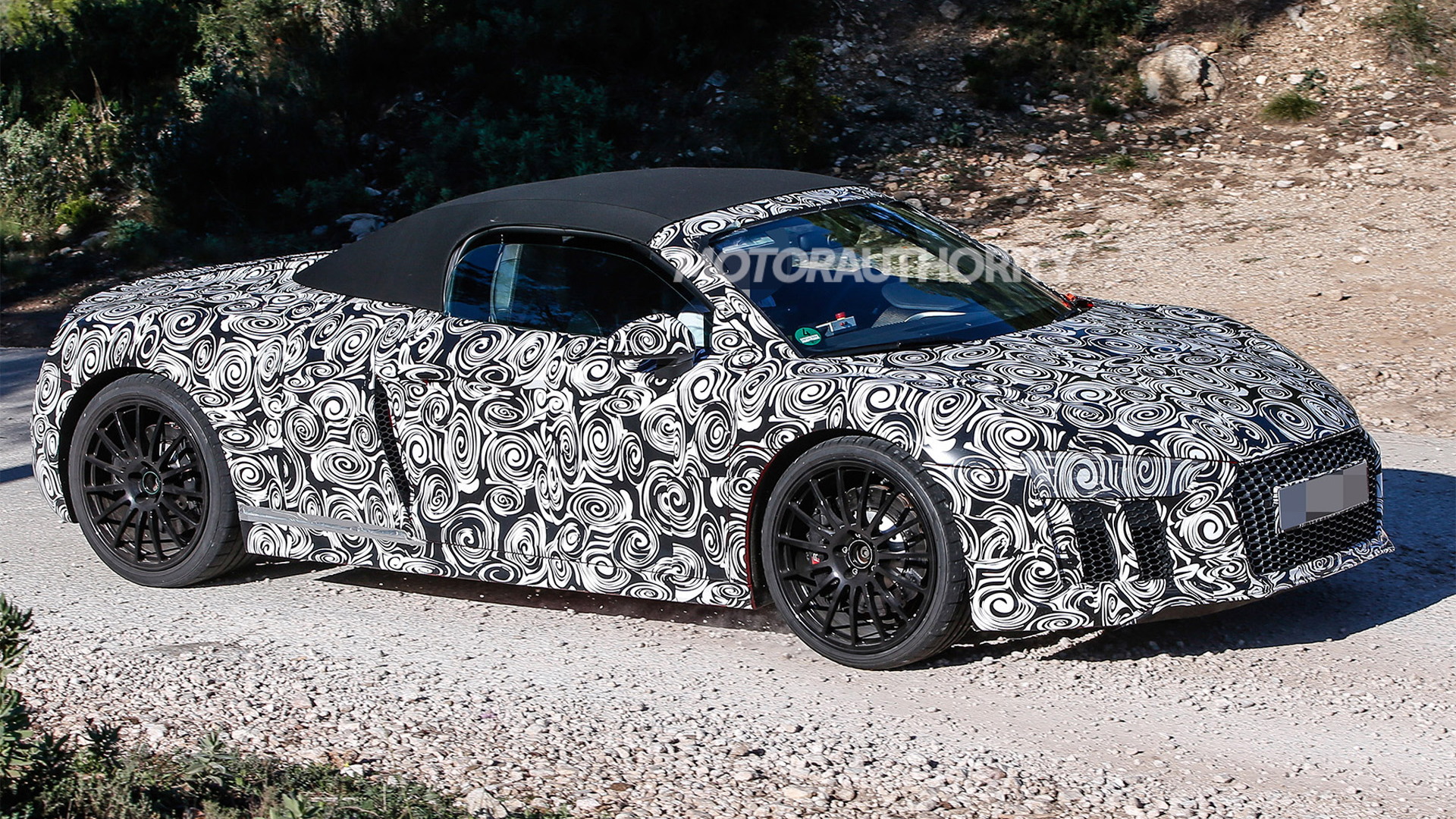 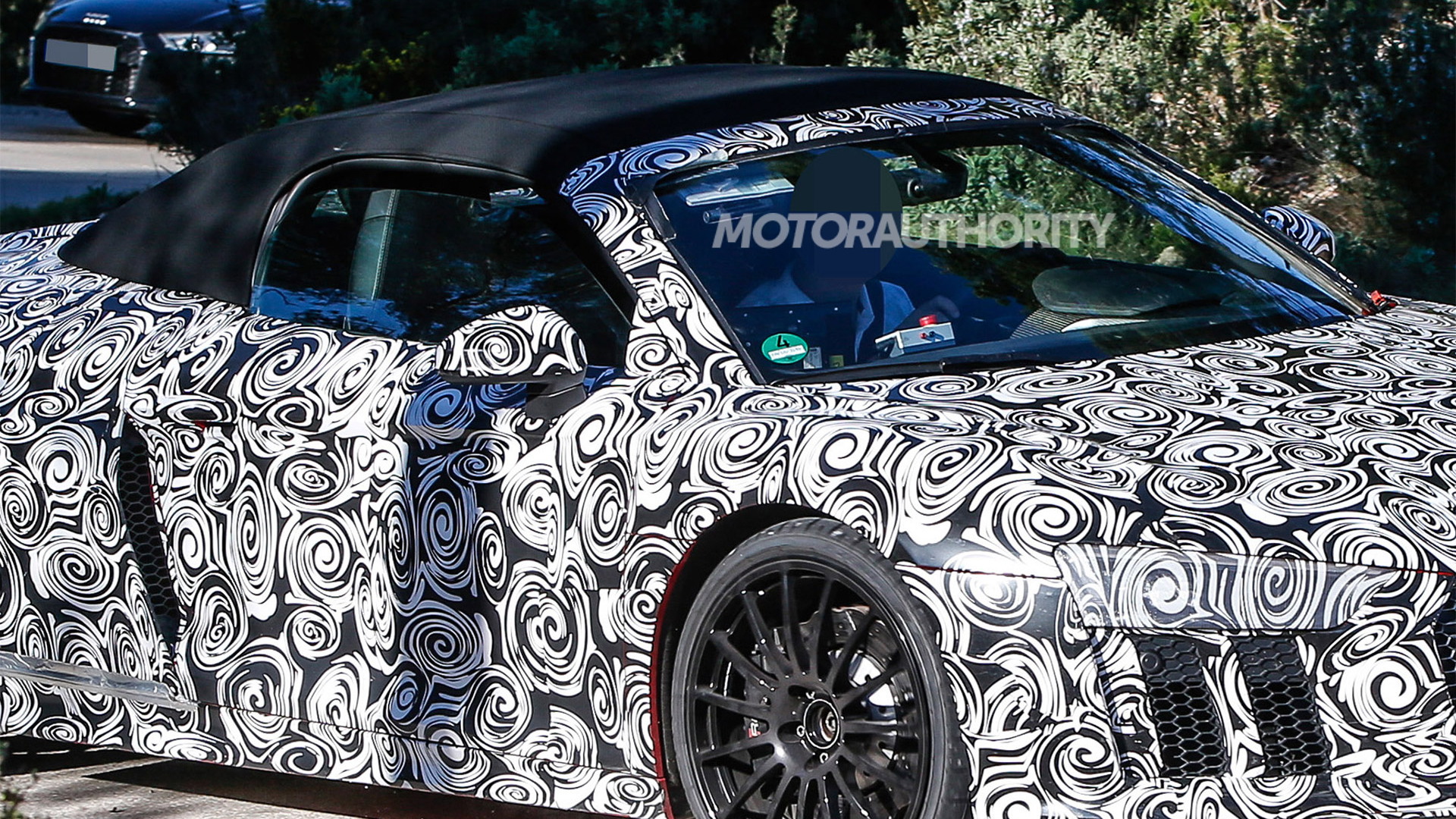 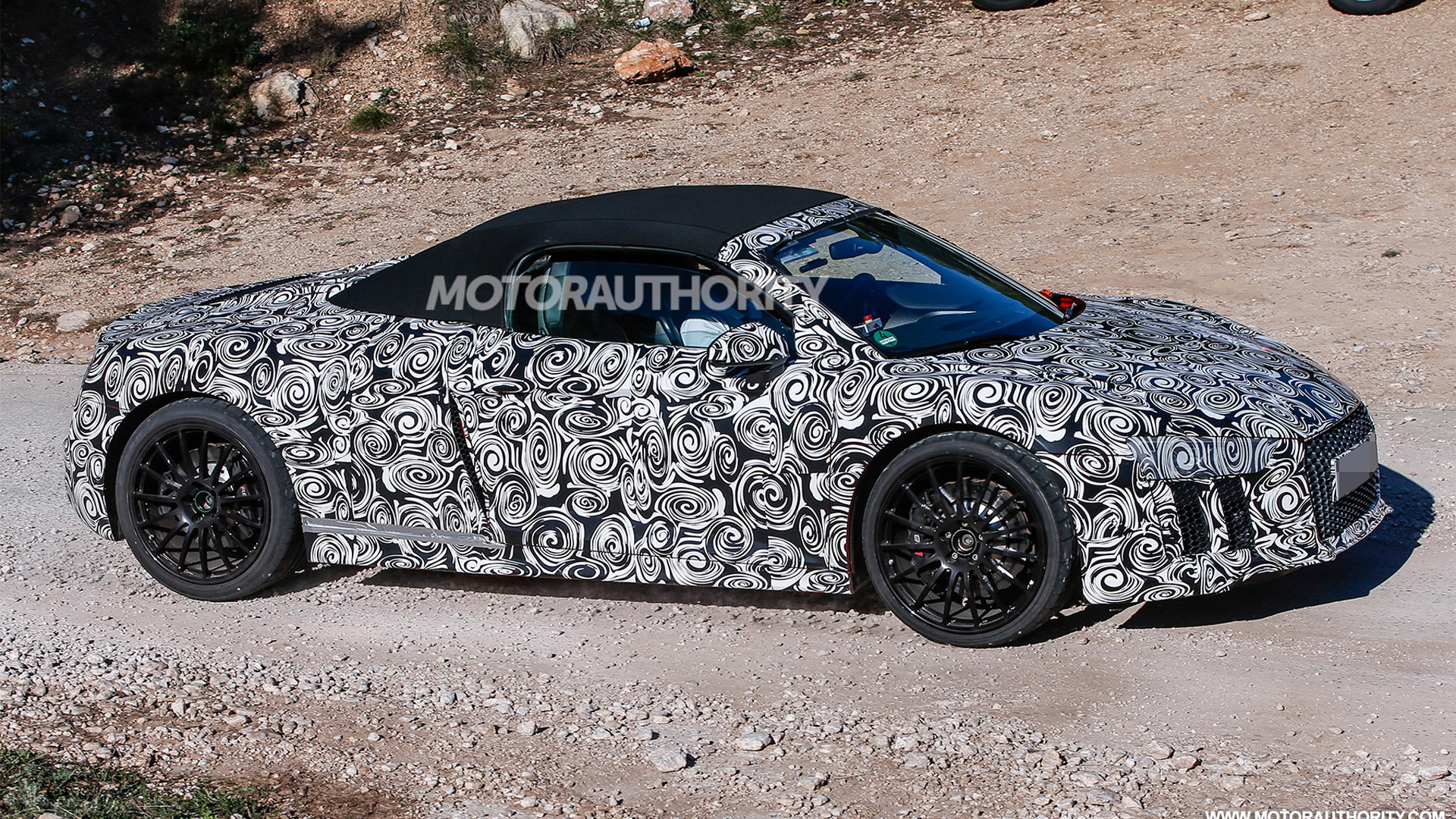 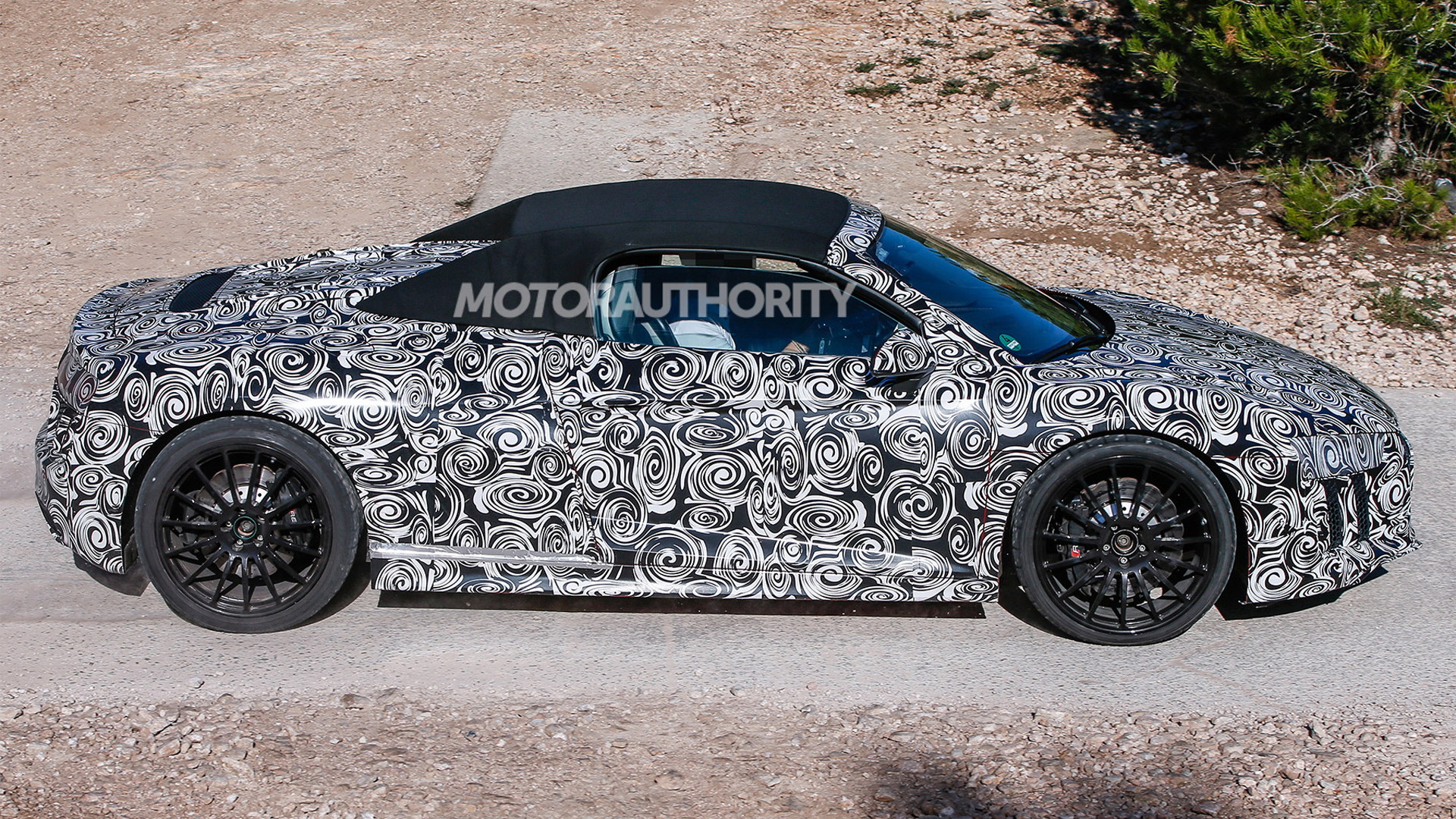 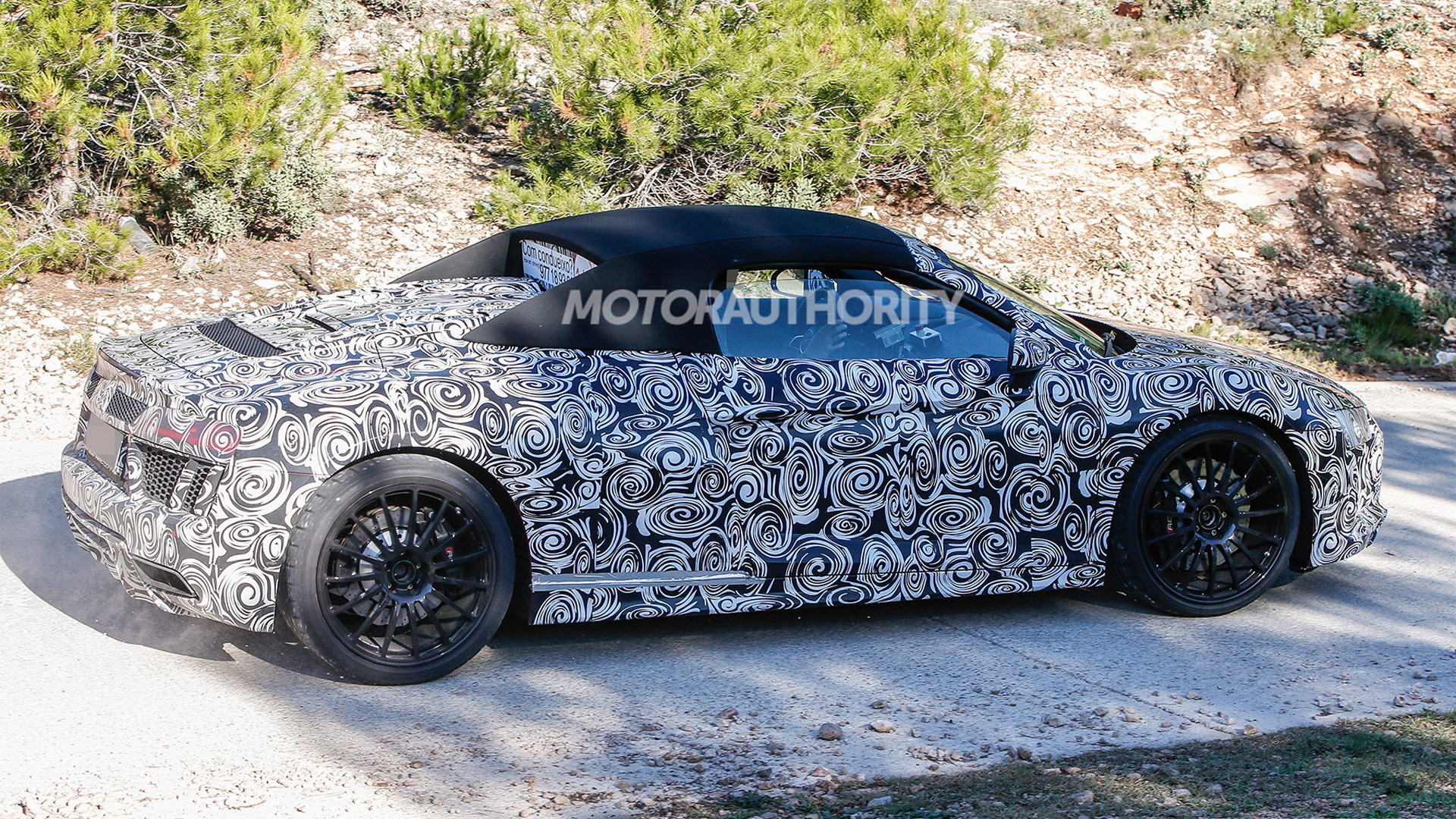 These are our latest spy shots of the second-generation R8 Spyder from Audi. The coupe made its debut at the Geneva Motor Show back in March and we suspect the convertible will debut at the Swiss show in 2016. A debut at this month’s Frankfurt Auto Show is also a possibility. It was at the German show that the original R8 Spyder was first shown back in 2009.

From the spy shots we can see that the new R8 Spyder sticks with a conventional folding soft-top roof. The design is much the same as on the outgoing model, with a flat deck spanning the engine bay and a vertical rear window positioned immediately behind the seats. And though we can’t see it on this prototype, the fuel cap has likely once again been relocated to the rear fender.

Other than the new roof and possibly some additional strengthening of the body—the outgoing R8 Spyder was around 200 pounds heavier than the coupe because of structural reinforcements—the new R8 Spyder should be much the same as its coupe sibling. The car will be offered exclusively with V-10 power at launch, with peak power coming in at 540 horsepower in V10 trim and 610 hp when you step up to the V10 Plus.

The only transmission will be a seven-speed S tronic dual-clutch unit. It’s a brilliant unit but we still miss the sweet manual complete with gated shifter offered in the outgoing model. Also gone is the 4.2-liter V-8. We suspect it will be replaced by either Audi’s twin-turbo 4.0-liter V-8 or an even smaller force-fed engine later in the life cycle.

Expect performance of the open-top car to come close to matching the coupe, which in V10 Plus trim means 0-62 mph acceleration in around 3.2 seconds and a top speed of 205 mph. As for pricing, the outgoing R8 V10 Spyder started at $163,450 and we expect a similar starting price for this second-generation model.

For more on the new Audi R8, be sure to read our first drive report.