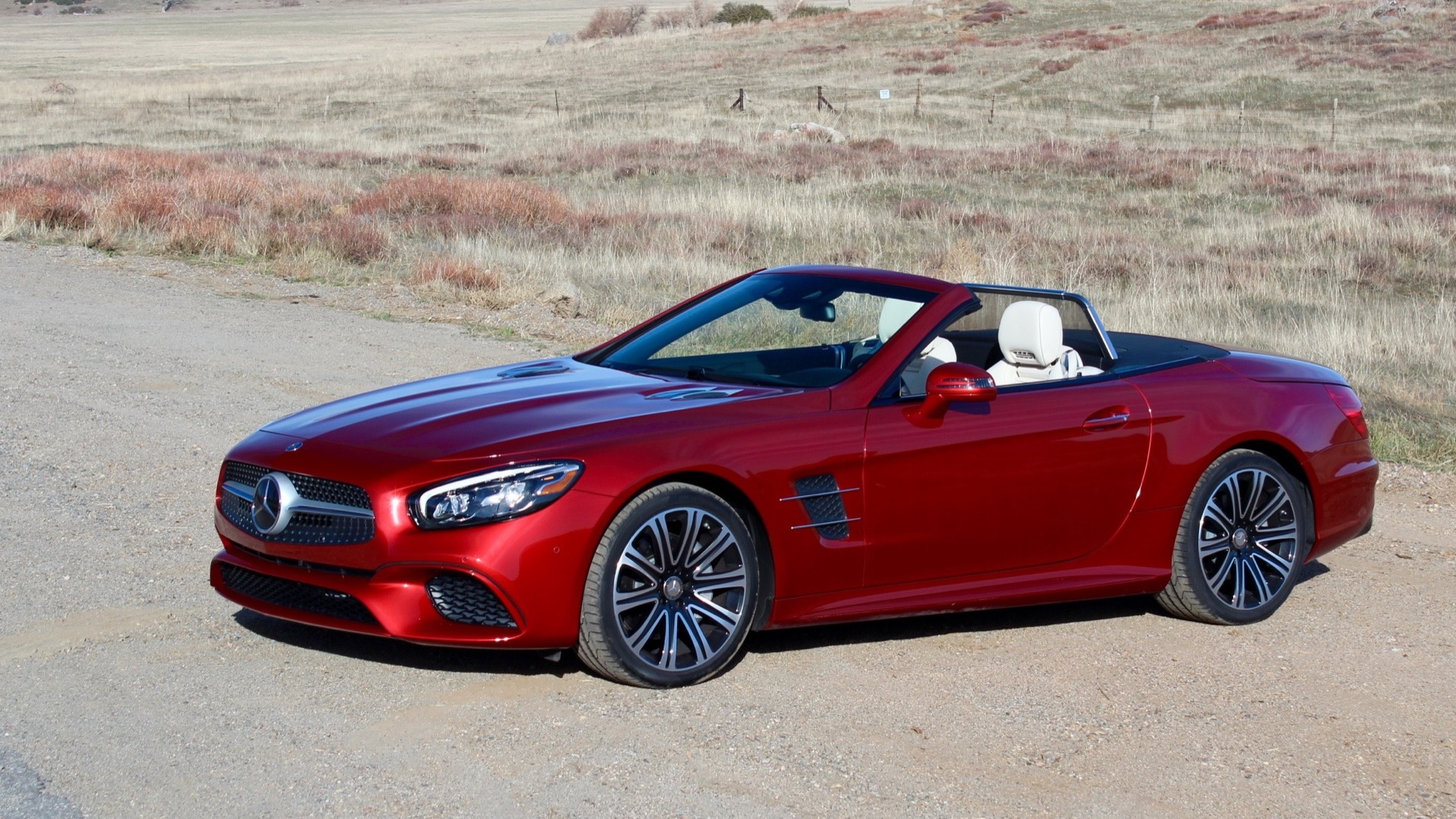 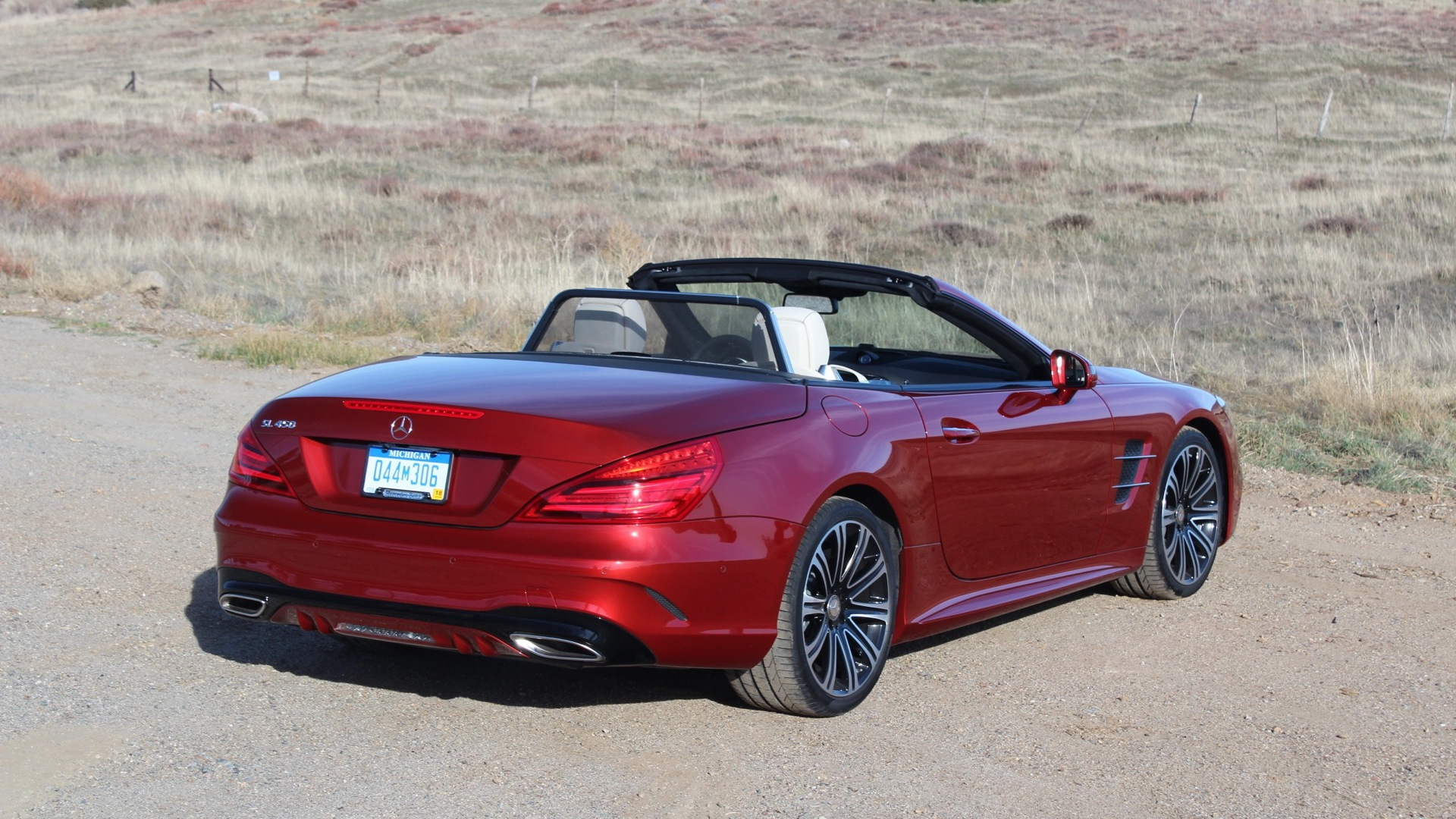 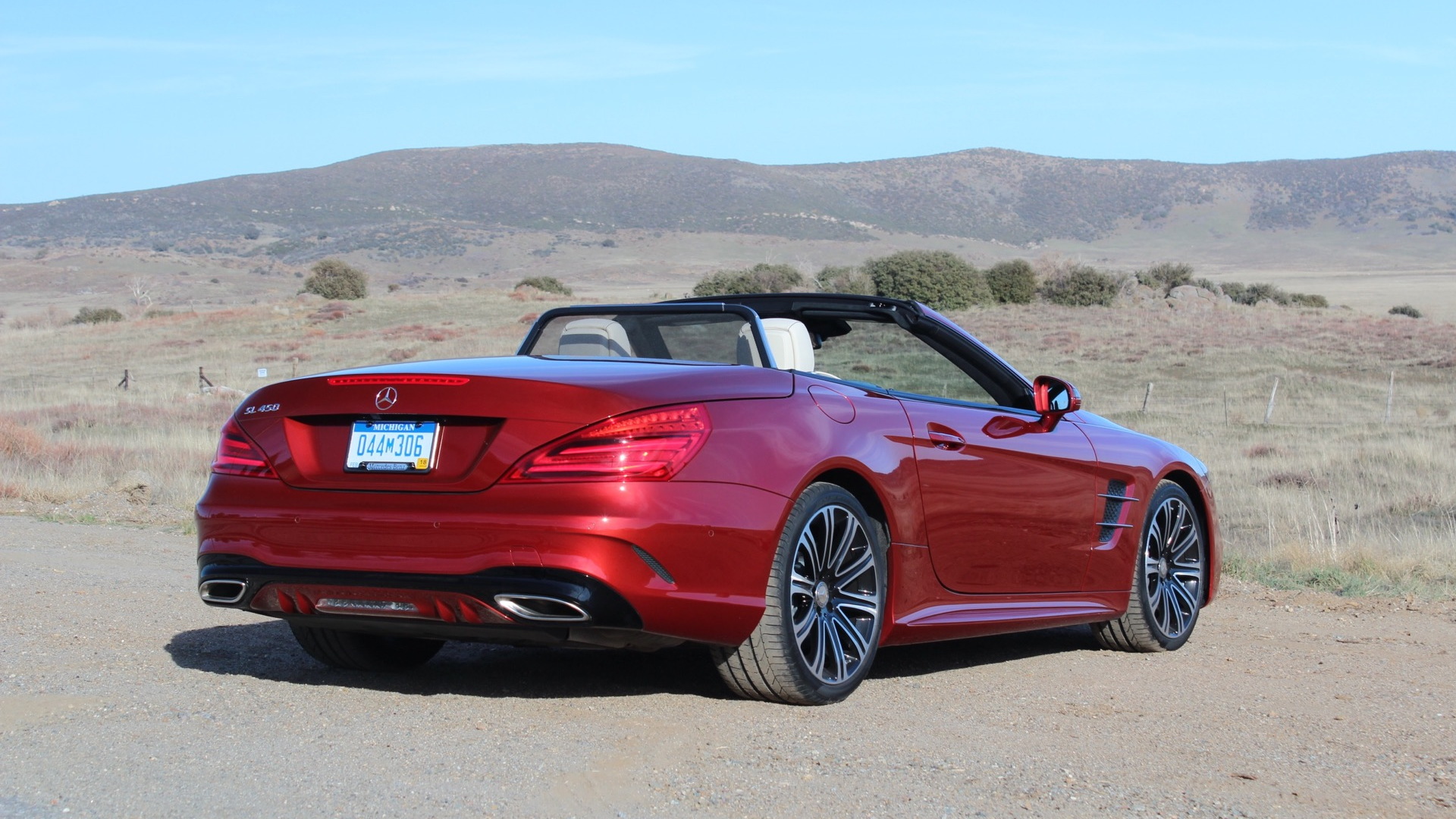 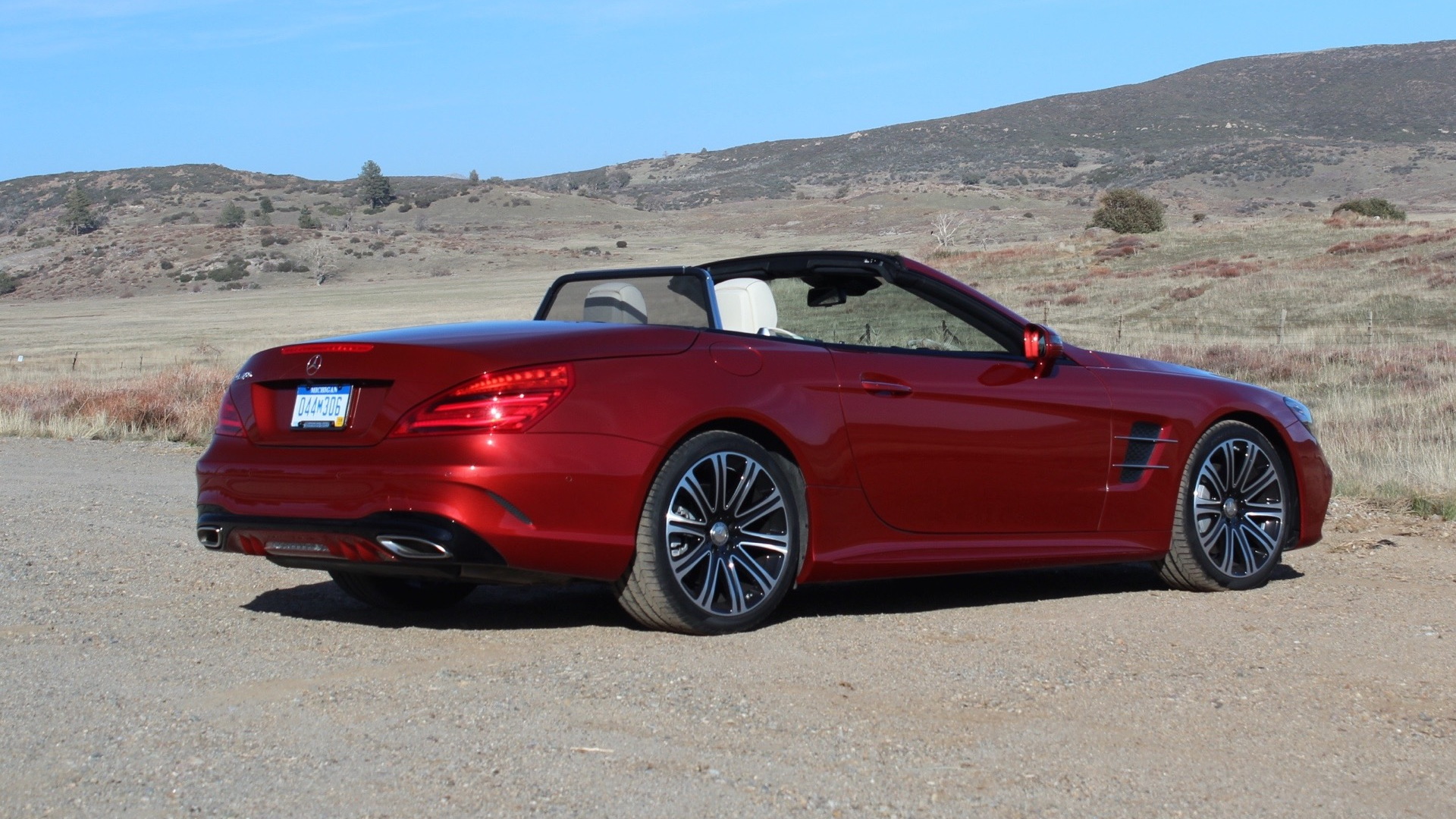 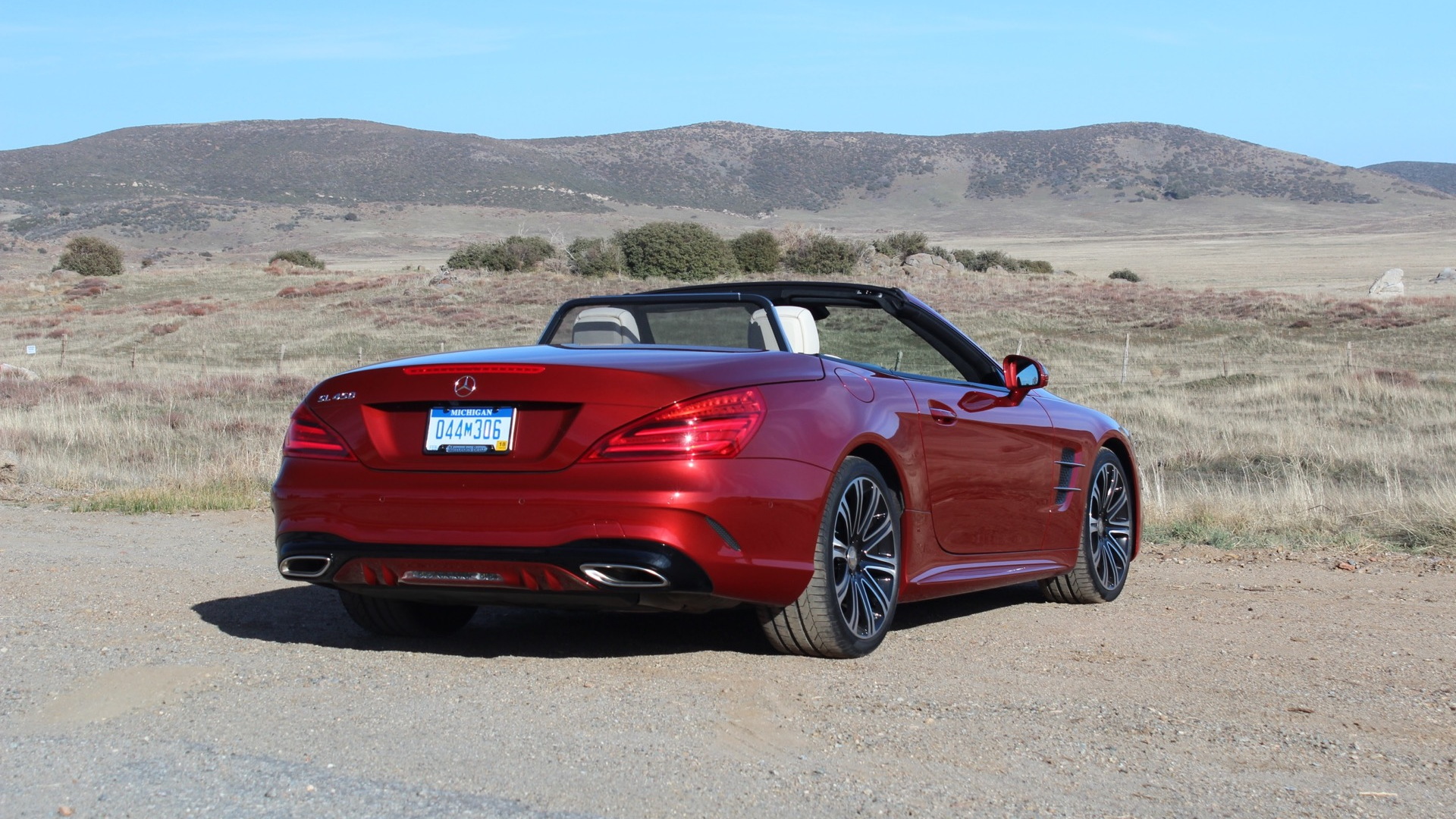 What’s the best pick for a sun-drenched, cross-country luxury-car road trip for two—on a route that doesn’t shy away from challenging mountain two-laners? The set of contenders has reshuffled over the years, but the Mercedes-Benz SL holds strong on the shortlist.

For 2017, this roadster original has reached a crossroads in the Mercedes-Benz lineup—one that helps refresh and redefine this model. With more powerful engines, new nine-speed automatic transmissions, svelte styling upgrades, and some new trick chassis technology, the 2017 Mercedes-Benz SL-Class models hones its driver’s car credentials just a little bit more, and gets what adds up to more than a mid-cycle refresh.

After taking a Southern California road trip of our own (guided by Mercedes-Benz), this past week—250-plus miles in several different SL models—we can say that the SL stretches its luxury roadster boundaries more than ever.

The way we see it, the current generation of the SL feels far more like a grand-touring coupe than an all-out sports car—and given that, there are two potential sweet spots in the lineup.

But first, a little background is in order. Up until this year, our preference within the SL lineup was the base car, with its steel-spring suspension, supplemented by a variable damper system that adjusts with the Dynamic Select modes (now Eco, Comfort, Sport, Sport Plus, and Individual)—and, to some degree, to driving style and road conditions.

Active Body Control (ABC) is a full active suspension system, controlled by hydraulics and capable of adjusting its parameters in milliseconds. It helps erase lift during hard acceleration, nosedive during hard braking, and body roll (tilting to the outside of the corner) during hard cornering. But this system, which has been offered as an option for years, has been a mixed blessing, because the sensations it provides tend to feel unnatural in tight switchbacks, as the car stays flat.

Now with a new Curve Tilting function for ABC, it allows that system’s great dynamic prowess but lets the car lean up to 2.65 degrees—into corners, like a motorcycle rider would, or as a driver and passenger track their eyes through a corner—so as to effectively reduce the lateral Gs.

It’s a dynamic trick, but an incredibly effective one, and it makes the rather heavy SL not just feel more nimble in switchbacks and quick transitions, but more settled, also reducing head-toss and road-weariness on such roads. SL63 models really make the most of this, too—not entirely because of the added horsepower and torque, but because of these models' limited-slip/locking rear differential.

The new Curve Tilting ABC is available on every SL model, though, from the base SL450 and its twin-turbo V-6 to the twin-turbo V-8 SL550, as well as the SL63 AMG and SL65 AMG models.

From a powertrain standpoint, it’s the twin-turbo V-8 in the SL550 that best seems to fit the relaxed yet strong touring character that’s a natural with this car. It now makes 449 horsepower and 516 pound-feet of torque, and matches up quite well with the nine-speed automatic transmission (although we noticed some uncouth behavior at low speeds and gentle throttle in a few cases during our drive).

More than 50 percent of SL buyers have been choosing the V-6 version of the outgoing SL, and it’s easy to see why. Especially in this new, more powerful 3.0-liter twin-turbo version (362-hp, 369 lb-ft), the SL450 feels nearly as quick in driving anywhere near legal speeds; while the sound is a little more strident, as long as you don’t crave the character of a V-8 this engine will do just fine in flaunting your (or your spouse’s) taste in roadster style.

Off in the opposite direction, there are the AMG versions. In a car that’s been designed with such inherent grace, the AMG SLs can feel a little forced. That said, the SL63 is the meticulously engineered, sharply-tuned brute of the lineup. Its pulsating, bellowing, crackling high-revving V-8 (577 hp and 664 lb-ft) always feels just a little over-the-top in sounds, sensations, and actual power delivery, and the seven-speed AMG Speedshift transmission is a gem with this combination, managing to shift with delicate precision at gentle throttle openings yet bang out racing-influenced powershifts when you need to move quickly.

It’s not quite the snarling, ebullient AMG GT, but it’s also a heck of a lot more livable.

Truly, seven speeds are more than enough; the awesome, responsive seven-speed AMG transmission arguably does a better job in most respects than the nine-speed in the mainline models—and it allows full manual control, holding the selected gear even with the accelerator mashed to the floor.

But there’s no need to even use the manual mode, as the electronic shift controls feel telepathic, blipping to a lower gear with just a dab of the brakes before a corner or to control speed on a steep downhill.

All the models in the lineup now come with engine stop/start; and it's the SL63 AMG, surprisingly, that has the most subtlety to that system's operation, masterfully quelling the momentary shake you feel slightly in the non-AMG models.

We didn’t drive the 621-hp, V-12-powered S65 this time, but it remains the banshee of the lineup, a car that’s technically the quickest and fastest in the lineup, but with enough additional weight to point back to the S63 as the superior handler.

The styling tweaks for 2017, on the outside, are a relatively minor point in all but the full-frontal view of the SL. While they provide some synergy to the rest of the current M-B lineup, they also give the SL more of a polarized, two-sided design ethos: chiseled, and more like an over-the-top sport sedan front end, but with a graceful touring coupe rear two-thirds. Purely from the side profile, it’s still far from the prettiest, most perfectly proportioned SL; but from the other collective angles the facelift manages to help command quite the presence.

A calm cabin, within tempestuous performance

Comfort in the SL models, no matter which one you choose, is better than what you’ll find in most prestige luxury cars costing quite a bit more. Highlights include strong cooled seats, massage seat features, and, of course, Airscarf, which blows warmed air onto your neck on cool mornings. The top will raise or lower at up to 25 mph, and through some folding wizardry it leaves enough trunk space for two airline carry-on suitcases, plus a backpack or two. It’s a shallow space, but a usable one—and behind each of the front seats there’s a deep, lidded-and-hinged storage bin.

Top down, you can power up an air deflector that, with the side windows up simultaneously, is one of the most effective in any convertible made, creating a zone that lets you be relatively soft-spoken at 70 mph. Power up the top, and the SL truly turns into a tight, vaultlike coupe; a passenger might have no idea that this moonlights as a convertible.

About the only feature we’re not convinced about on the SL is what’s front and center—its COMAND interface. Compared to the rival high-end versions of iDrive or MMI, it feels limited and too dependent on remembering text-based menus. While it’s more excusable in a $35k CLA, being in a $150k+ SL 63, otherwise a tour de force of technology and engineering, underscores that point.

A heavy helping of safety tech

At the base SL450 level, these models include Keyless Go with Hands-Free Access, Parktronic Parking Assist, a Harmon Kardon surround-sound system, and a Collision Prevention Assist Plus feature with active brake assist. A Driver Assistance package heaps on more active-safety items onto the SL, including Distronic Plus advanced cruise control with steering assist, an Active Brake Assist system with cross-traffic functionality, Active Blind Spot Assist and Lane Keeping Assist, and Pre-Safe Brake, which will help actively brake at up to 40 percent power, while sounding an alert, if traffic is stopped ahead. The moment the driver does touch the brake pedal, 100 percent of braking power is delivered.

Other key options on the SL include softer Nappa leather upholstery, ambient lighting, and the Active Body Control with Curve Tilting function. And there’s Magic Sky Control, which makes much of the roof glass, with the capability to adjust light transmission with the touch of a button.

Additionally, on the AMG models you can get a 12-speaker Bang & Olufsen BeoSound system.

Taking a step back, the SL is peerless. The Maserati GranTurismo Convertible, Aston Martin V8 Vantage Convertible, and Porsche 911 Cabriolet all sacrifice just a bit more quiet, long-legged road-trip comfort, while, perhaps, delivering a little more edginess at those times when you're pushing the limits.

Collectively, the revised SL lineup goes farther, employing some technological tricks, as well as some serious engineering, for more seat-of-the-pants thrills, all to full advantage—pushing the limits between what defines a racy roadster and a downright luxurious convertible. Expect no less.