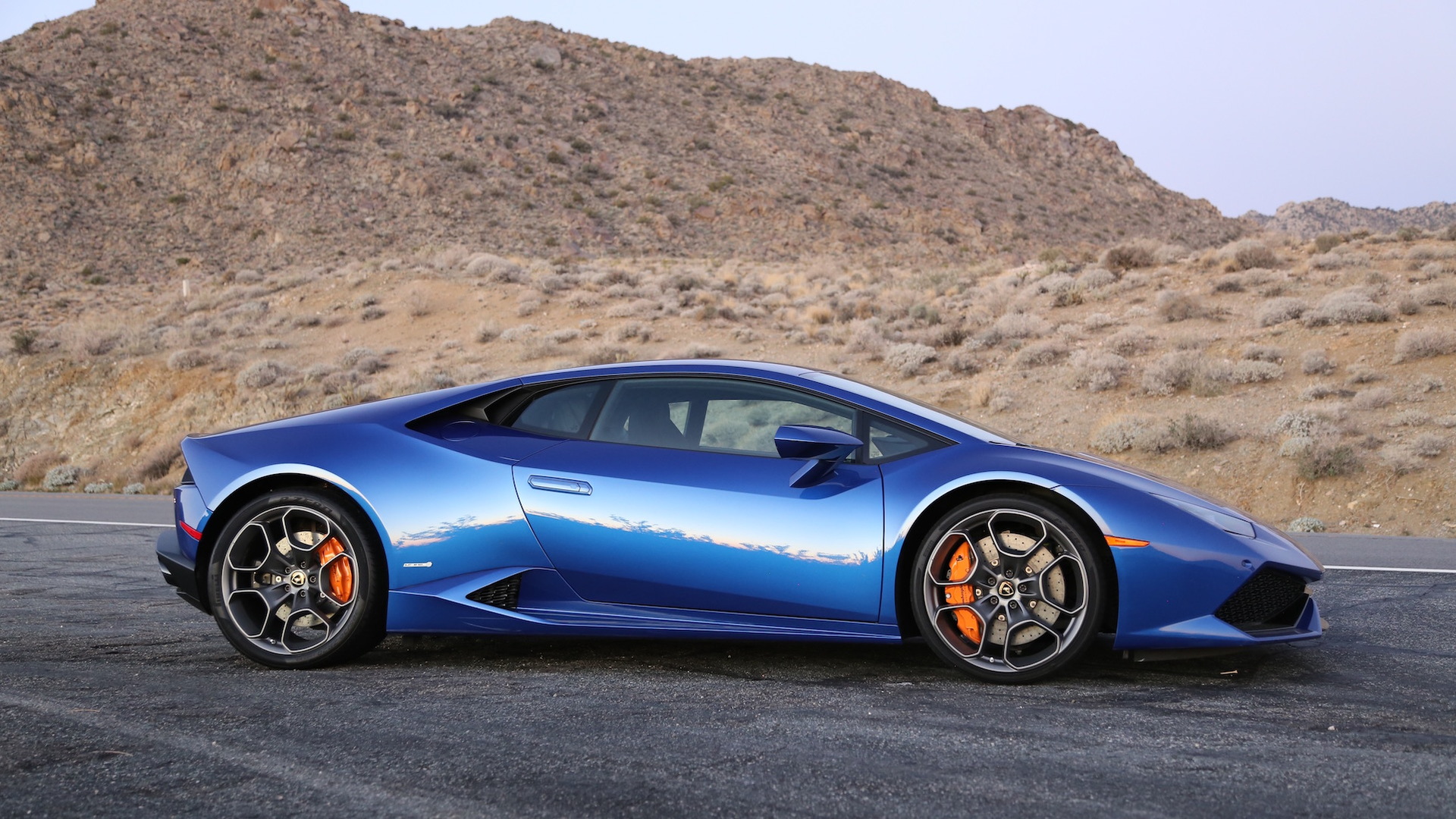 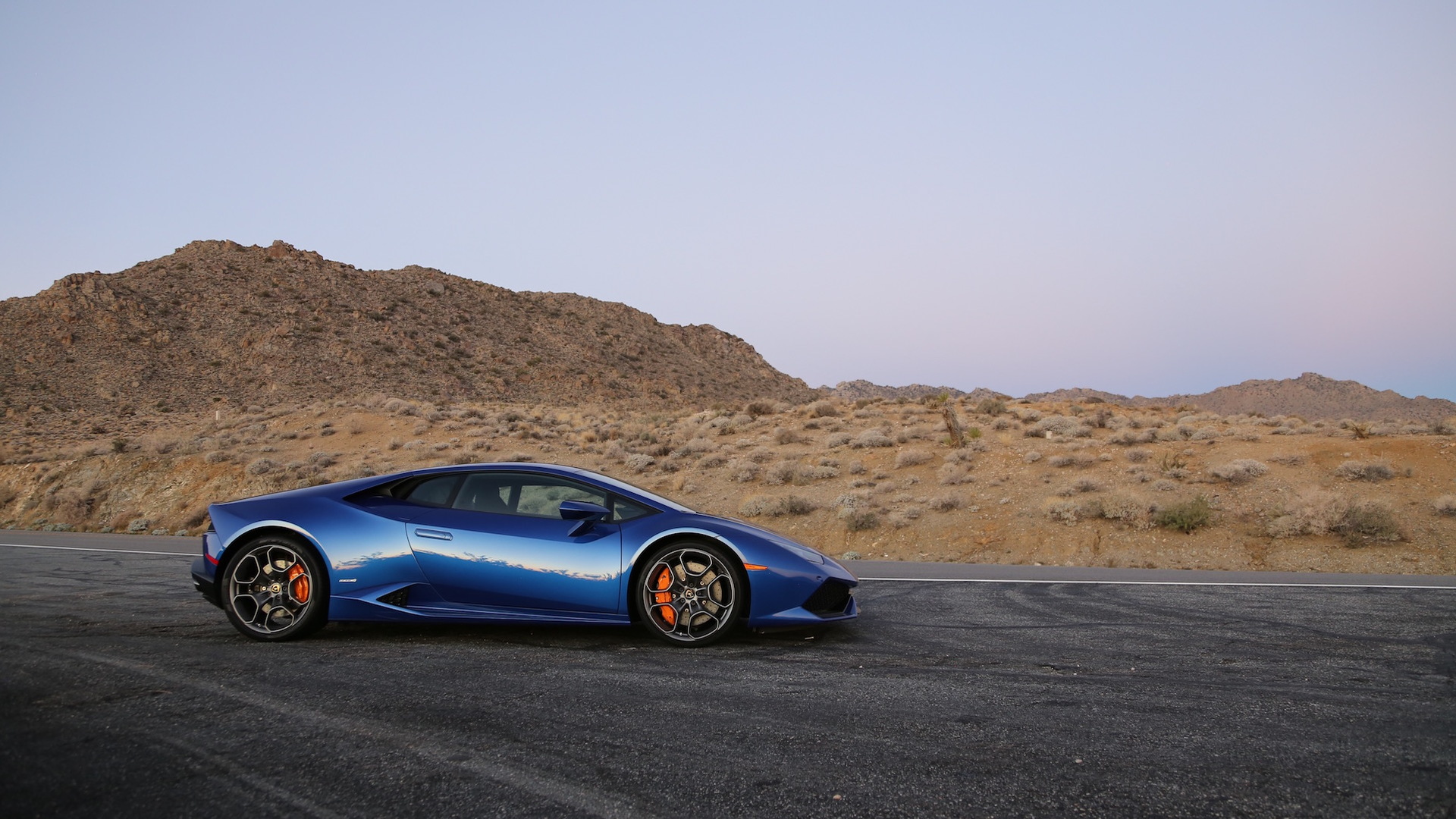 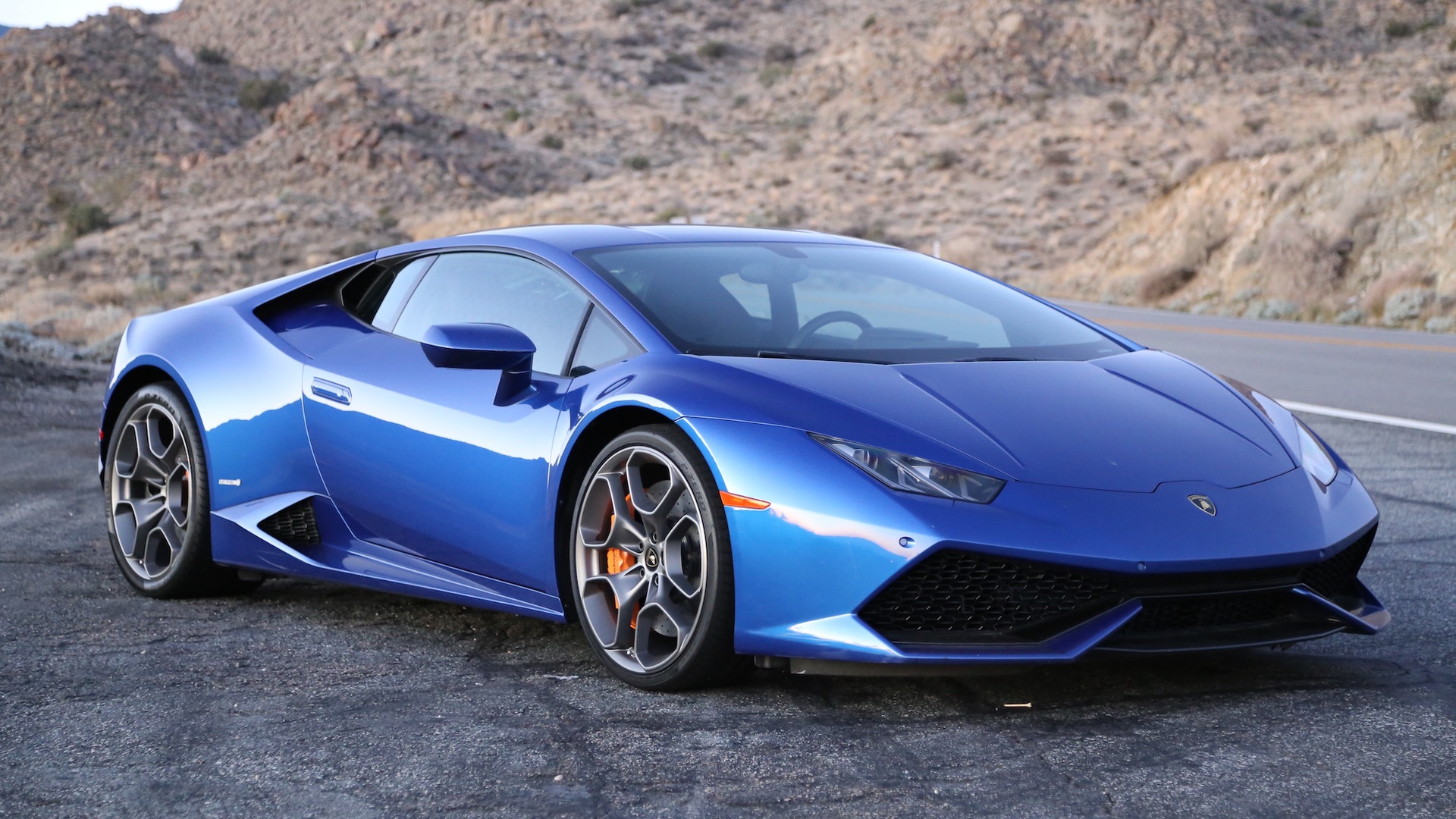 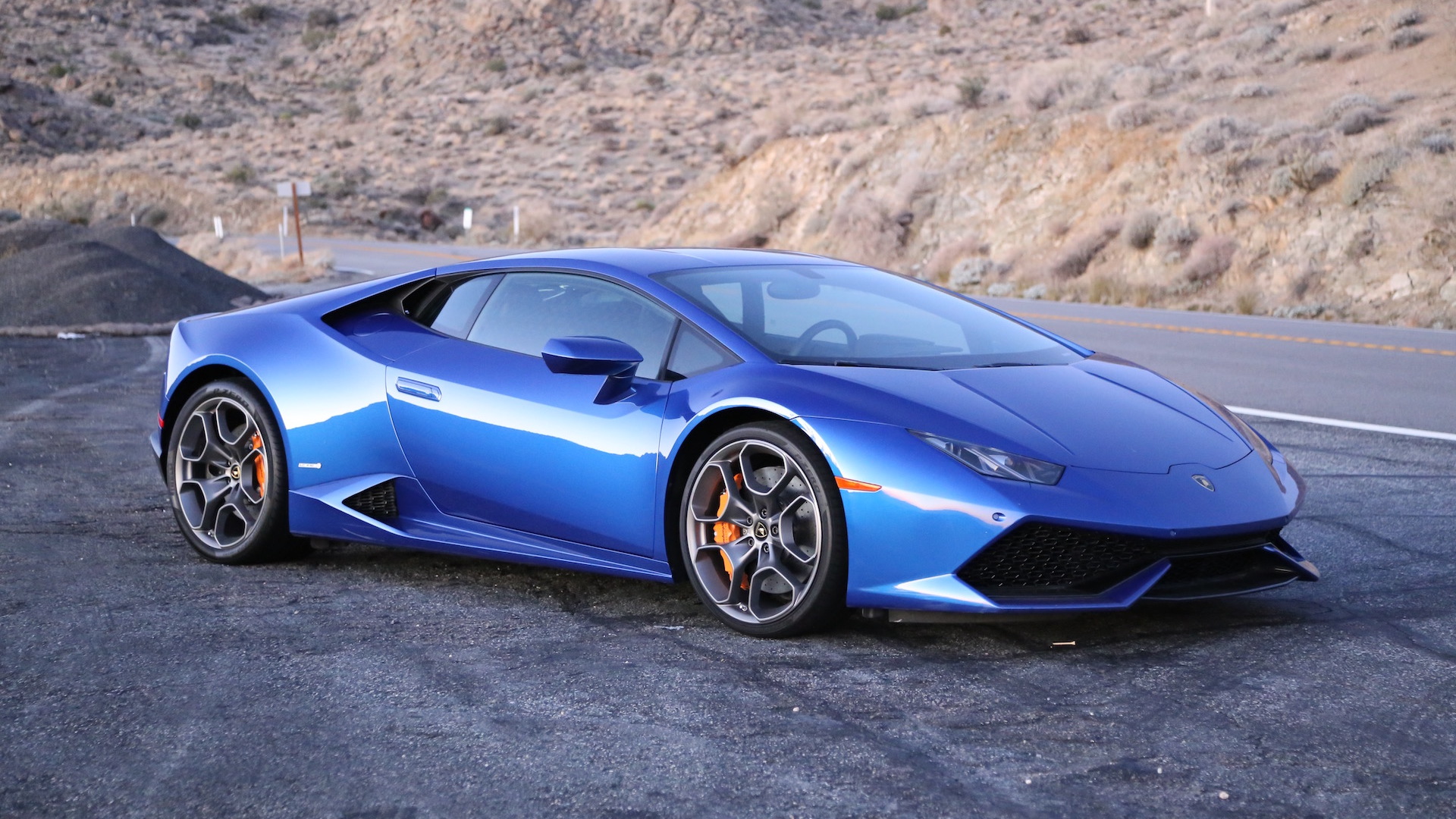 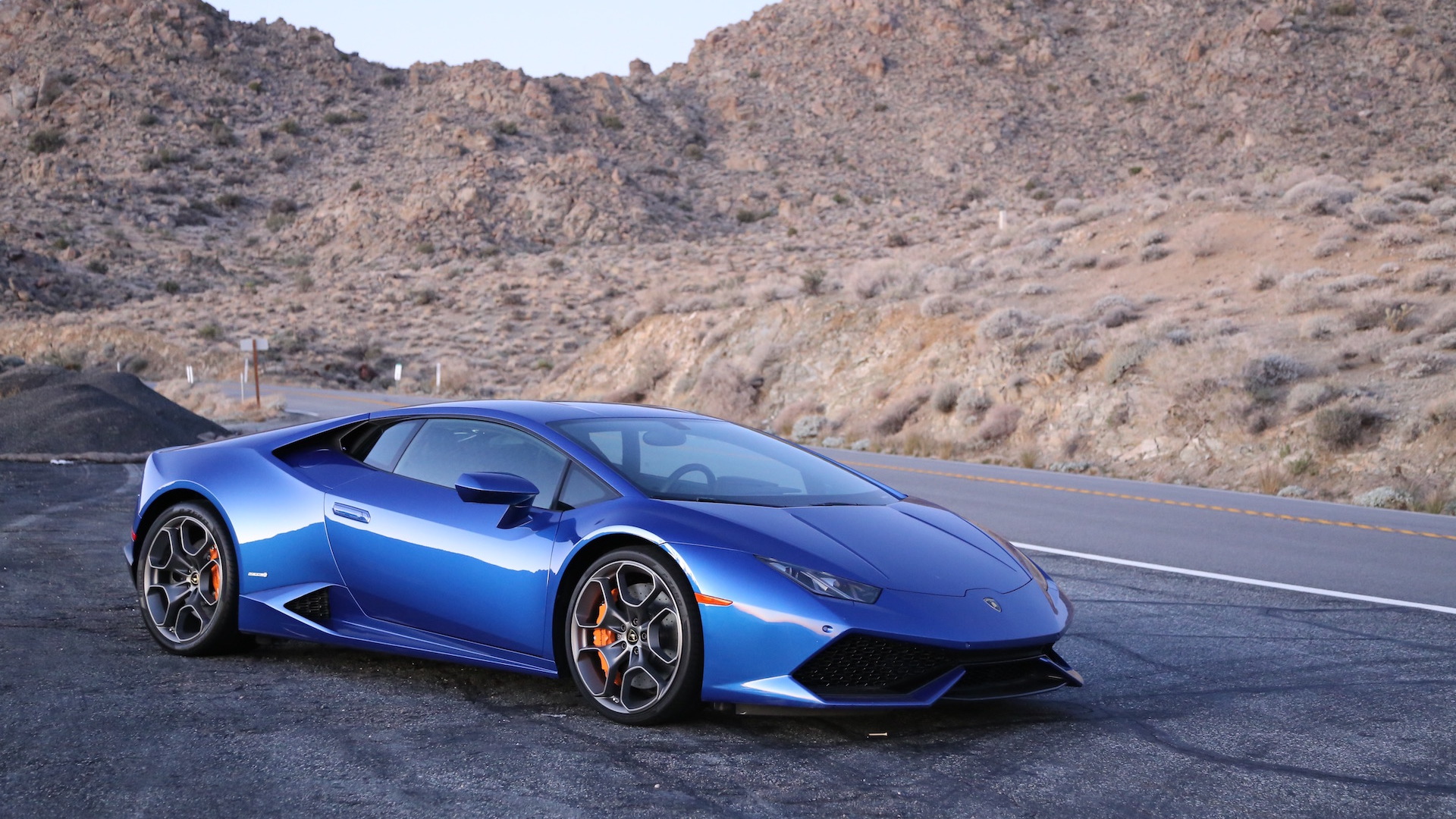 Lamborghini. For some of us, it means the Countach, the ultimate Eighties poster car, maybe the craziest supercar of all time.

For others, it's the Aventador, the state of the art supercar with Italy written all over it.

For us, it means the Huracán--the approachable Lamborghini, if there is such a thing. It's a blistering two-seat supercar that's just as rewarding to drive on the street as it is on the track. It's the best Lamborghini ever, in our humble opinion.

We've raced it around European road courses and strafed some continental countryside. But last weekend, we found time to hustle it around on our turf, on some of the best sports-car roads in America.

We're ready to show you every nook and cranny and every tight corner we found in our video road test of the Lamborghini Huracán.

Roughly $250,000 gets you this--a spectacular wedge of Italian beef, carved out of a solid block of lust.

Scoops, ducts, intakes--all the usual Lambo styling tricks and traits are here. But until the Huracán they never looked like they all got along. The Huracán's the first Lamborghini where the balance is perfect. The huge cuts and corners tuck perfectly into the dart-shaped body. There's a bit of Countach in the sharp nose, some universal aero cues down the sides, but it's all Lamborghini, and a fresh take that's an instant classic.

The cockpit's as close to the Blue Angels point of view as we'll ever get. The controls spread out like the view from the deck of the USS Enterprise, all toggles and switches and paddles. It's a little intimidating, as it should be.

But the real magic of the Huracán is this, its raucous and unrepentant V-10. It's a 5.2-liter with 601 horsepower and 413 pound-feet of torque, and it's a screamer. It rips to redline with a vicious bark that's part symphony, part shouting match. And it's not just for you--everyone the Huracán passes will get caught up in its staccato rap. It'll rocket from zero to 60 mph in about 3.2 seconds, and to a top speed beyond 202 mph.

Slide into the tightly bolstered bucket, flip up the cover over the ignition button, and it's on. The brute wakes up and roars to life. Pull on the right paddle, and the Huracán strains against the leash--but it has the self-restraint to drive at a human pace too, when you leave it in Strada mode.

I wouldn't call it mild-mannered, but Strada mode is where there's a relative calm in the Huracán's power delivery, where the seven-speed dual-clutch transmission mutes shift shock. Where the magnetic dampers take the edge off mismatched road surfaces. The bumps are noticeable but not irritating, even after you've spent two hours getting to pavement paradise. It's mostly quiet, and well-mannered--dare I say comfortable?

The Huracán stops playing nice once you flip the toggle on the steering wheel to Sport mode--or Corsa, the track setting. That opens the throttle and the exhaust, clamps down on the suspension travel, and gives the gearbox full permission to crack off paddle shifts just as quickly as it can.

A few big mountain passes in Corsa, and the Huracán has me convinced. Its handling game is figured out, locked down. It weighs just about 3,400 pounds and feels lighter, slipping between these canyon walls. It's pretty well balanced for a mid-engine car with all-wheel drive. Corsa mode dials back the stability and traction control and still, it's poised and composed and controllable. It's shockingly easy to drive the Huracán quickly--way beyond the point where your driver's license is in danger.

The Huracán is even sort of pleasant to live with every day. It's a shock to slide easily into its deeply bolstered driver's seat, and long drives in Strada mode are as effortless as they can be.

CHECK OUT: Giant Teddy Bear Not Allowed Atop Lamborghini Gallardo

But the Huracán is wide and it is low. Passing on narrow roads can be nerve-wracking. There's barely room inside for a passenger and an iPhone. Backing into a parking spot, or doing a U-turn? Don't. Just...don't. That's the price you pay for the low-slung supercar lifestyle.

After a few hours, I found the end of my road with the Huracán. It played mountain passes like a greatest-hits package, all with high fidelity. It's truly fun and rewarding to drive, even if you don't have a nearby track and an all-access pass.

The price you'll pay? About a quarter of a million dollars, and that's before you pick and choose your own colors and trim.

Is it worth it? We'll leave that to your bank account, and to the numbers of points you have left on your driver's license.