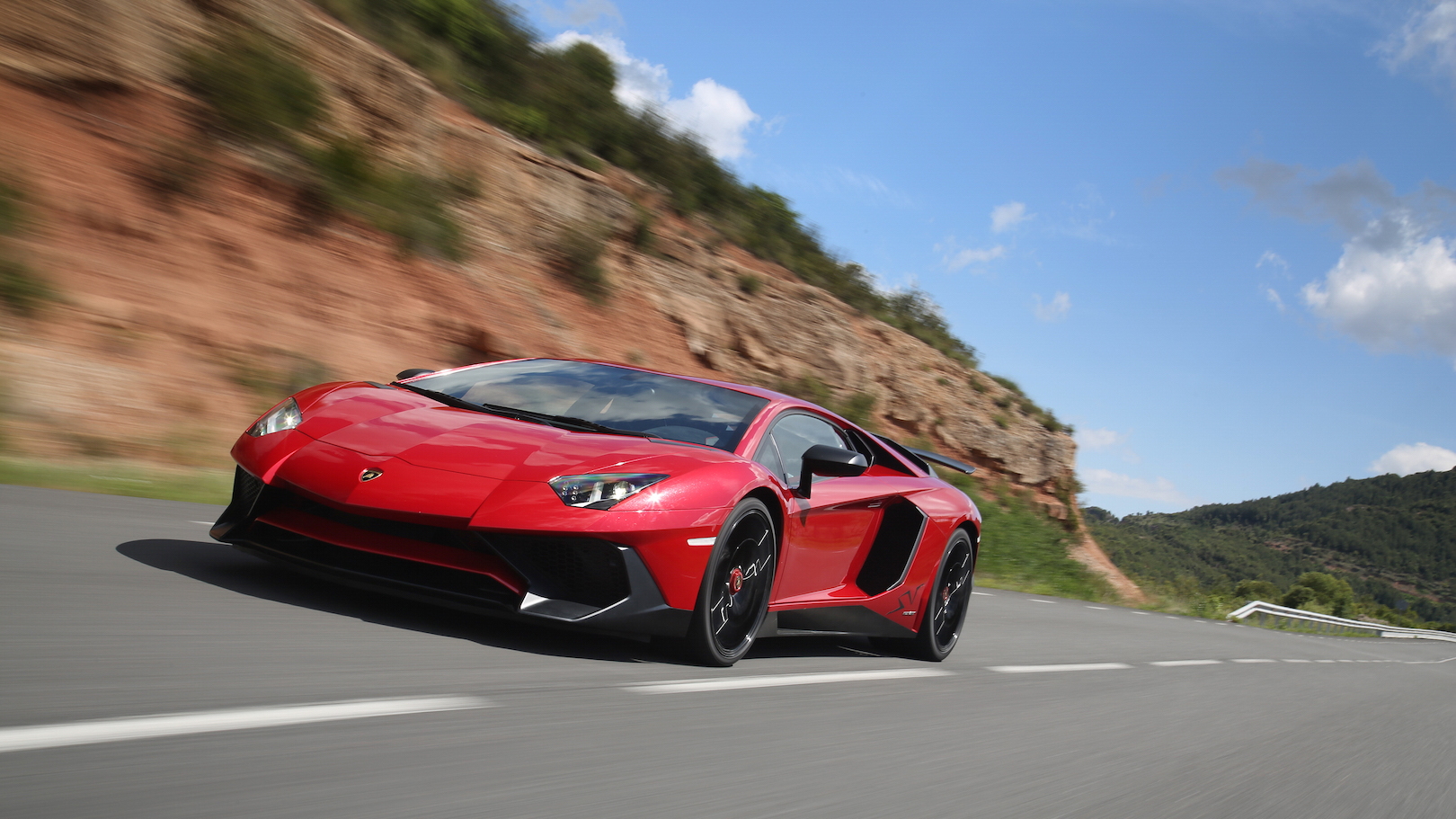 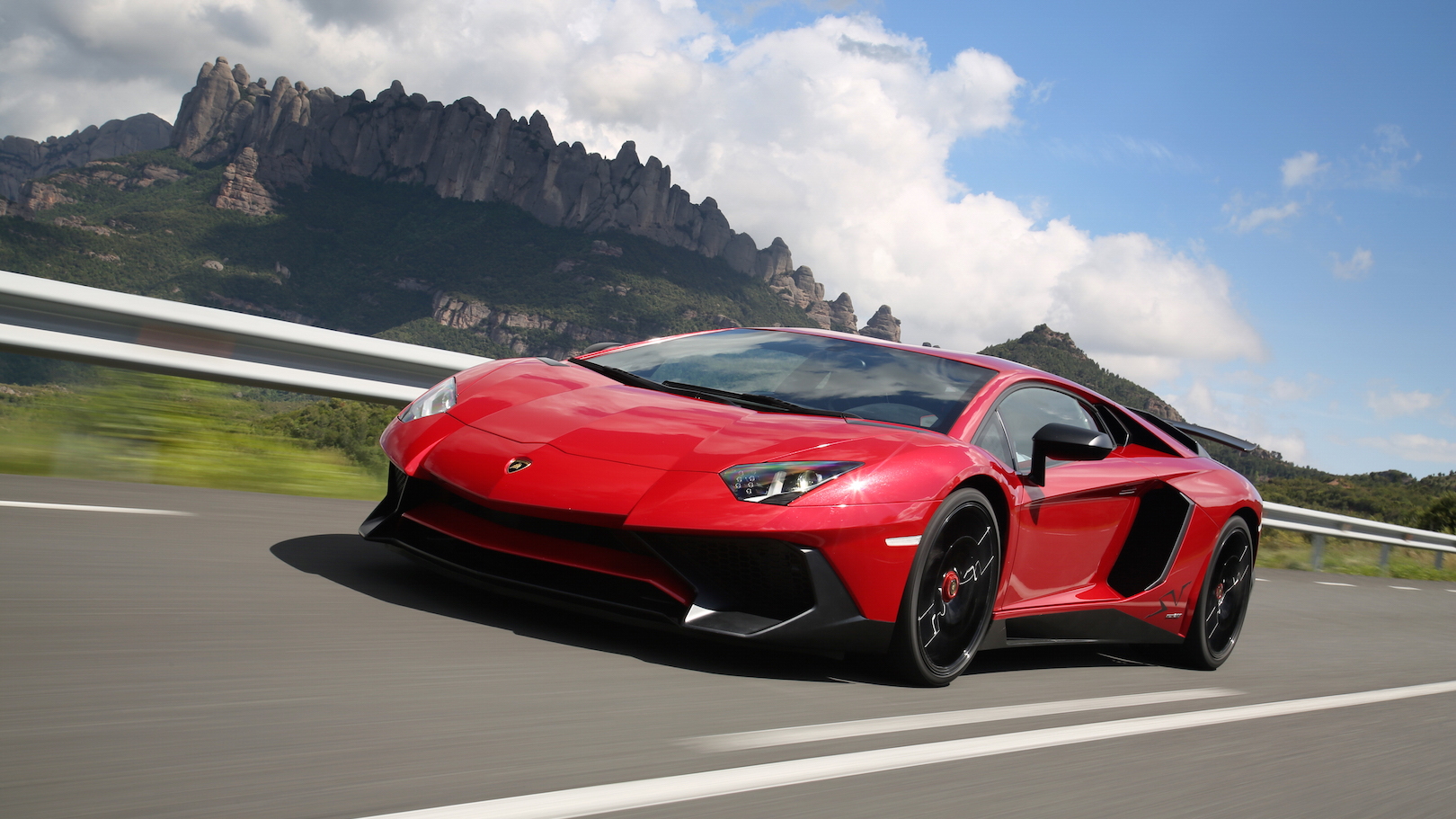 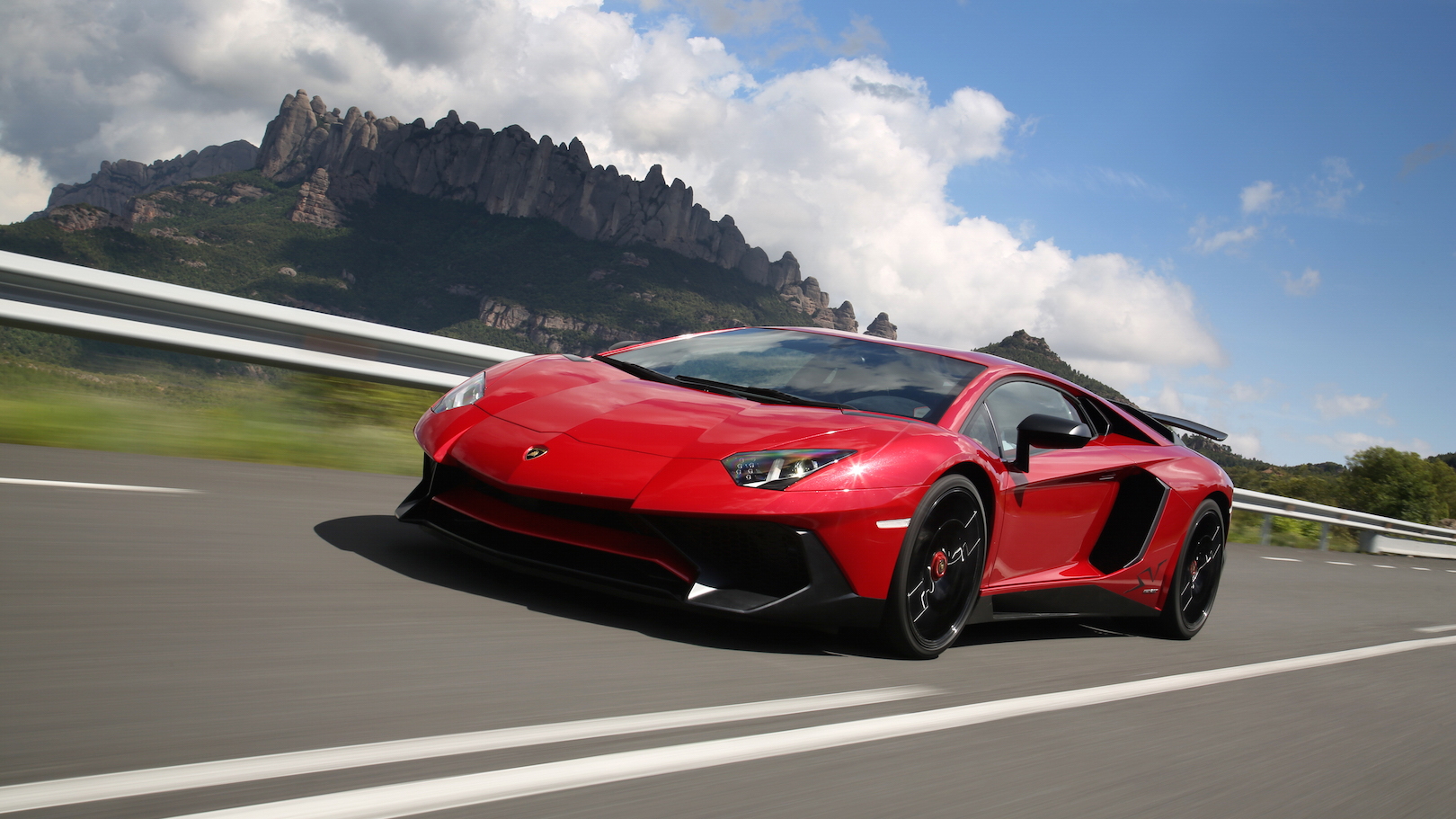 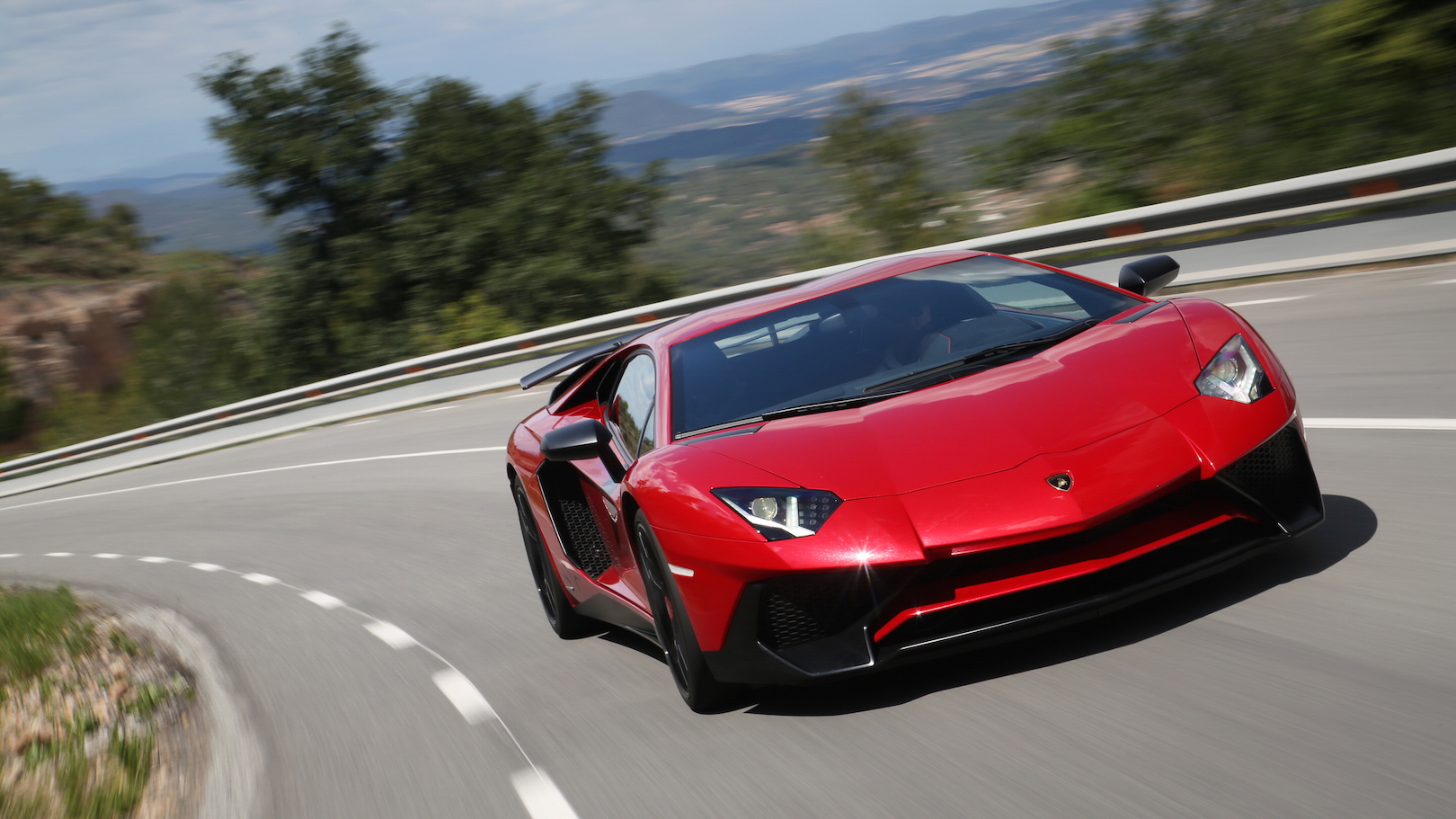 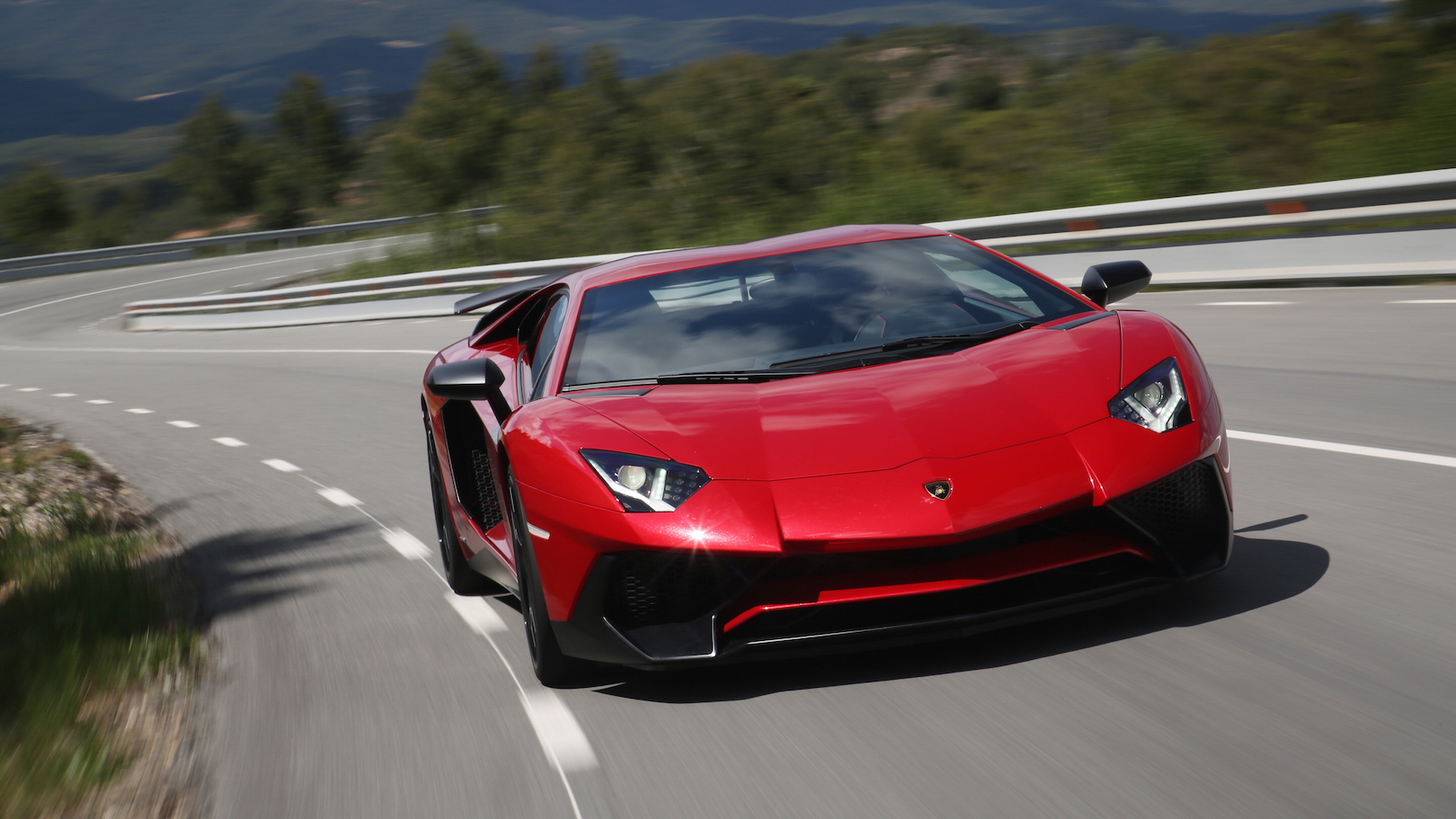 66
photos
Medical science tells us that neck strain is something to be avoided. It can compress nerves, bulge discs, and can lead to numbness and tingling.

Okay, science. We hear you. But we're calling you on your bullshit.

Some kinds of neck strain are acceptable. Gratifying. Mind-altering.

The Lamborghini Aventador SV is the kind of car that will put a big kink in your neck. Not just from trying to get a closer look, but from coping with its huge acceleration and grip.

Somehow, there's no skull and crossbones on its carbon-fiber body. No warning label stuck to it, either. Would that stop us from trying to push its limits on the track? No, it would not.

Cars don't get more extreme than the V-12-powered Aventador. It was born looking like the world's angriest lawn dart. Its crushing grip on the ground can pulverize rubber into a cloud of dust. It sounds like a nest of the most unwelcoming, super-sized hornets stirred into attack mode. That's at idle.

And now it's even more outrageous, as a lighter, more powerful version of itself--the Aventador LP 750-4 SuperVeloce, or SV for short. Reason enough to fly over to Spain's Circuit de Barcelona-Catalunya to see if we could stump our chiropractor while probing its limits.

Barcelona is layer upon layer of history colliding with the modern, a journey from Gaudi to gaudy in a few short blocks of La Rambla. It's a rock star of a city, with a ham museum, unfettered access to ruby riojas, a place where even the street urchins could sign with Wilhemina for catalog work.

It's also blessed with this spectacular Formula 1 racetrack. The Circuit de Catalunya is 2.9 miles' worth and 16 turns full of wide-open, Formula 1-ready pavement. It's like Austin's Circuit of the Americas, bathed in the light of Spanish sun, not cooked in the Texas heat, though the per capita man-bun count seems to be roughly similar.

The Circuit is the place to conjure up bad things behind the wheel of the Aventador SV. Belted into a bucket with a red spine stitched into its padding, I press the start button hidden under a red cover, and the mild shaking starts--not from the V-12. Not from caffeine. From the notion that 170 mph on the front straight is within pretty easy reach. It's Sunday, for God's sake. Four sets of four laps to go.

Lamborghini's CEO Stephan Winkelmann promised that the SV would be lots of things--mainly, more reactive at lower engine speeds, with an "unmistakeable and emotional engine sound." The impeccably tailored man is on to something. Good grief, is it emotional. Whole gospel choirs could be brought to tears with this naturally aspirated soundtrack. Its unforced induction sounds unearthly--and just sounds better than turbocharged anything. You can hear the alluring V-12 siren song down low, but you feel the top end. It is profound.

Horsepower and aerodynamics take the Aventador SV so far out of bounds, it's clear from the moment we launch into practice laps that the task at hand is just to get it close to the sun. Simple. It's up to 750 metric horsepower from a 6.5-liter V-12; by our SAE ratings, that's 739 hp, which is up 48 hp on the regular Aventador LP 700-4. Redline is up from 8,350 rpm to 8,500 rpm, and the variable valve timing and intake systems have been refined. 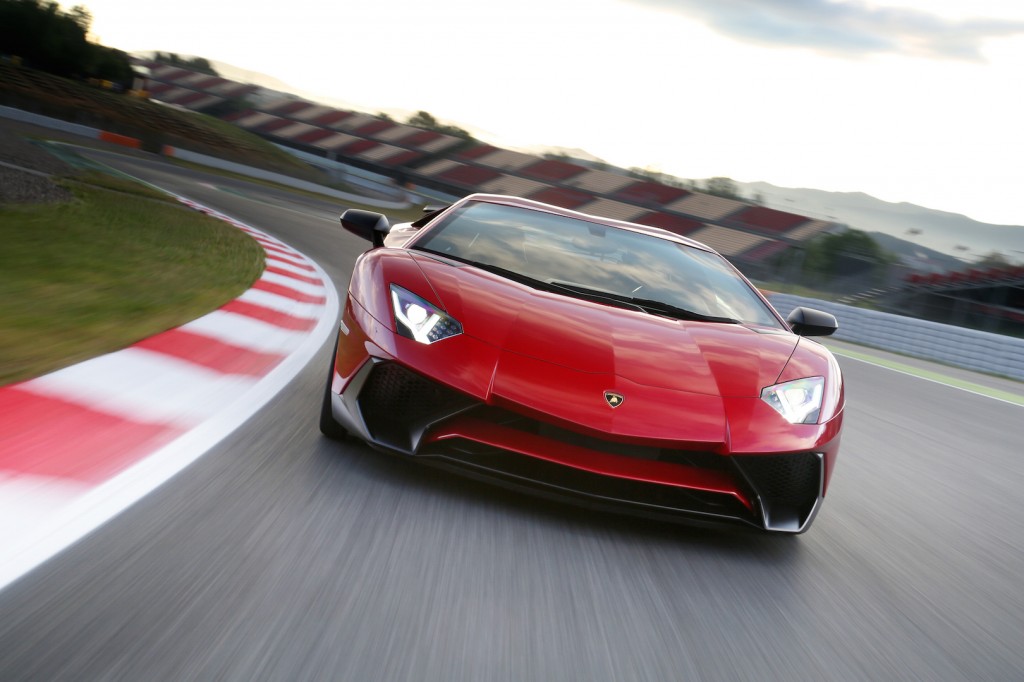 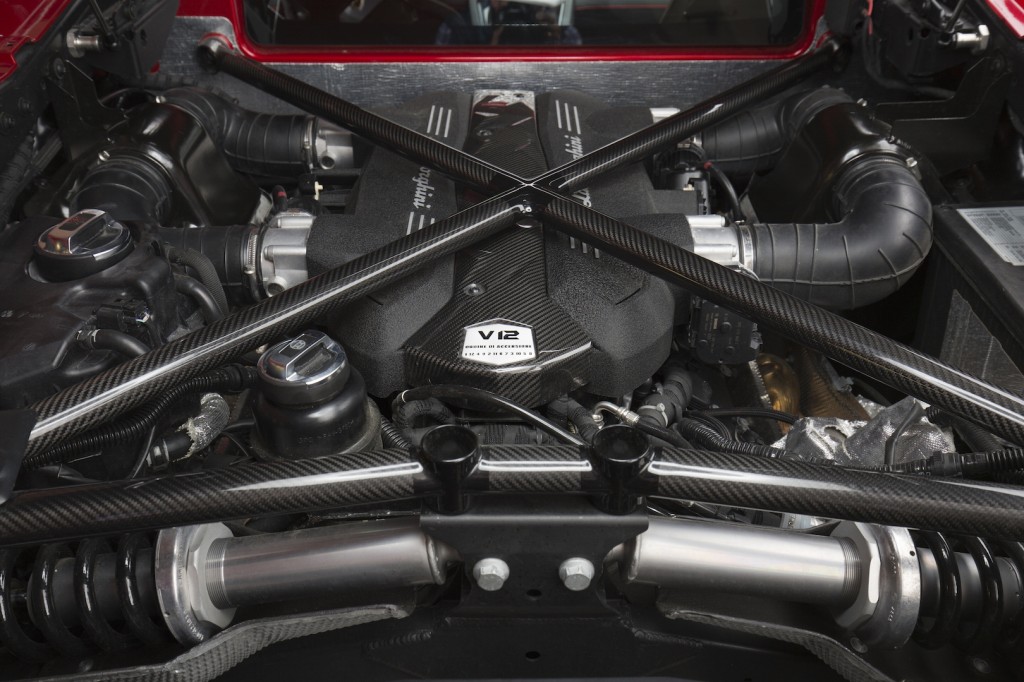 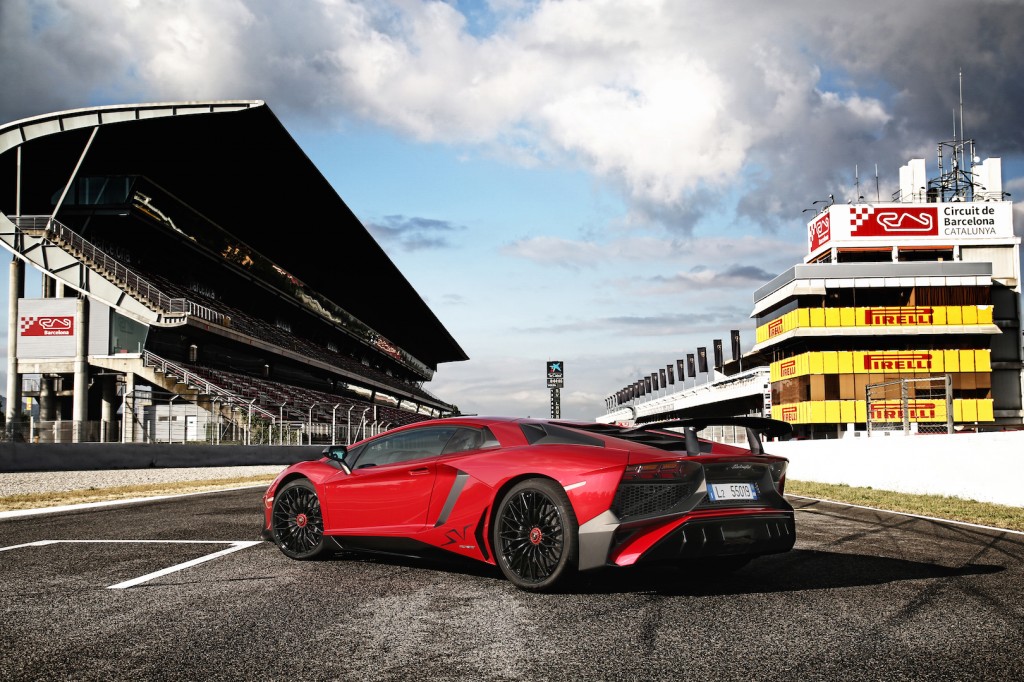 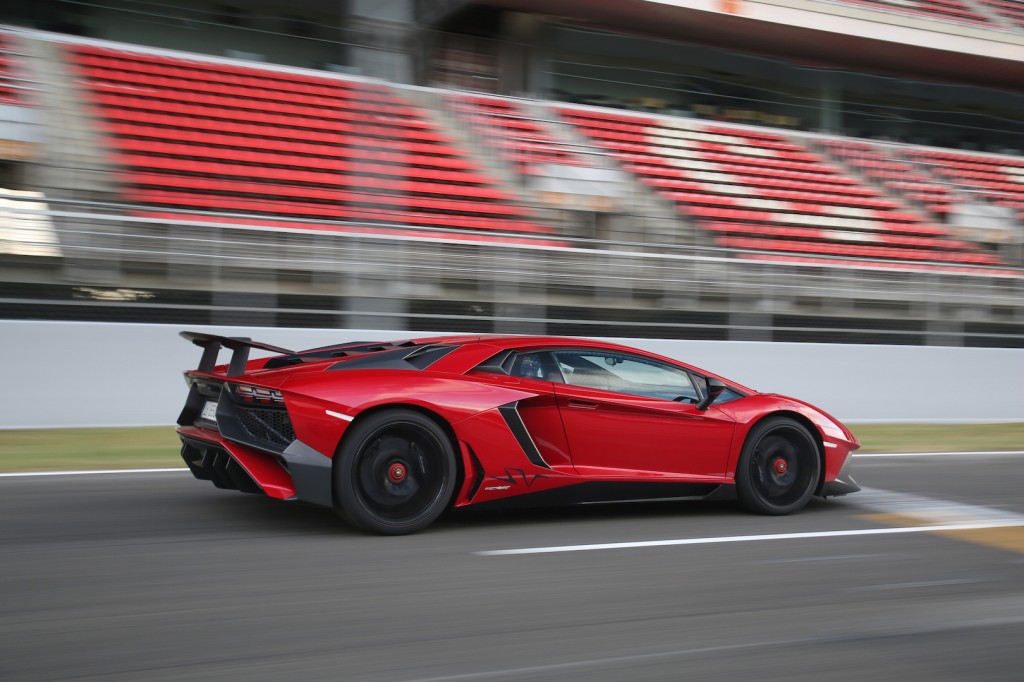 The SV pulls away on the power charts from the standard car at 6,500 rpm--a place I'll spend most of the next 16 laps. We leap out of pit row and my brain and toes adapt to the vast gulf of power pouring out on demand. Just when I think I've hit the end of the torrent of torque, on a string of long carousel corners, the SV lays down a megawatt more. I'm straining to keep from crawling to the edge of the seat, just trying to scan far enough ahead on the track before the next whiplash set of turns.


The SV's seven-speed automated manual transmission is an accomplice in all this, and its shifts get progressively less varnished as you toggle it through a set of algorithms for street, sport, and track ("Stradale, Speed, Corsa") that alter shift speeds, throttle progression, variable-ratio electric steering response, and magnetic-damper damping. Corsa mode delivers bangshifts on the order of 50 milliseconds: hurtling down the Circuit's front straight, gear changes bounce me off the seatback a good six inches, like I'm strapped to a mechanical bull. Which I am.
WATCH: Audi RS 6 Driver Runs Red Light, Gets Smacked By Tram: Video
By the numbers, the Aventador SV hits 60 miles per hour in less than 2.8 seconds—about a tenth quicker than the standard car. Top speed is claimed to be more than 217 mph, though to be honest, I can't tell if I came as close as 165 mph; that's the last number I saw flick by on the SV's digital gauge screen at the end of the front straight while I dug deeply into the brakes, decelerating semi-frantically, rear end moving around a bit as the car scuffles into the first of four cool-down laps.
Track mechanics tell me, when I pull in for a driver switch, that the lively rear end should settle down on the next full brake. Just a low pressure readout on a rear tire.
Okay, then.
They're right, of course, and over the next 12 laps, the SV has its act so nailed, I find little pockets of speed with each lap. It keeps revealing bits of its soul--the ones not already revealed in the cockpit, where carbon fiber's left exposed, both to cut trim weight and to underscore the mine of technical knowledge literally baked into each one. They've managed to trim about 110 pounds from the Aventador with even more carbon fiber in the seats and door panels.
Where the wonder material makes its presence known, really, is in aerodynamics. The SV couldn't reach for the stratosphere without more downforce, and downforce it has, thanks to a new front wing, rear diffuser, underbody panels, and a manually height-adjustable rear wing that helps to put 170 percent more push on the rear end.
MORE: See the Aventador SuperVeloce pound the 'Ring in under 7 minutes
It's a welcome development, since the SV is more than happy to rotate its rear for a few seconds while its Haldex all-wheel-drive system ships up to 60 percent of available torque from the rear wheels to the front. It's almost eerie, how it anticipates ham-handedness that has almost nothing to do with the locally cured stuff.
And that makes it almost silly fun, if it weren't for the insanely high speeds at which we tackle corners etched just a bare 90 minutes into memory. The steering never seems to change abruptly, just instantaneously; there's a difference. Those magnetic dampers all but excise lean from the equation.
The Aventador SV doesn't feel evil at all, in fact, just sharp and responsive. You'd be forgiven to want it to be a little crazy, a little uncontrolled, because Italian supercar. It flat-out refuses to live down to that ancient stereotype. Around the Circuit's crab-claw-shaped arms, it became ludicrously easy to crank the wheel to cut in a corner early, boot out the tail, erode some more of its magnificently asymmetric Pirelli P Zero Corsa tires, and let it gather itself back up before the next maddening set of switches.
The only thing that's strained by more than a dozen full-on, barely coned-off laps, is me. Driving the $493,069 Aventador SV is an exercise in tensing every muscle in your body to accommodate the physical demands of trying to hit shatteringly high limits, failing almost 100 percent of the time.
From our end of the stethoscope, that's the kind of neck strain you should seek out. Despite medical advice to the contrary.