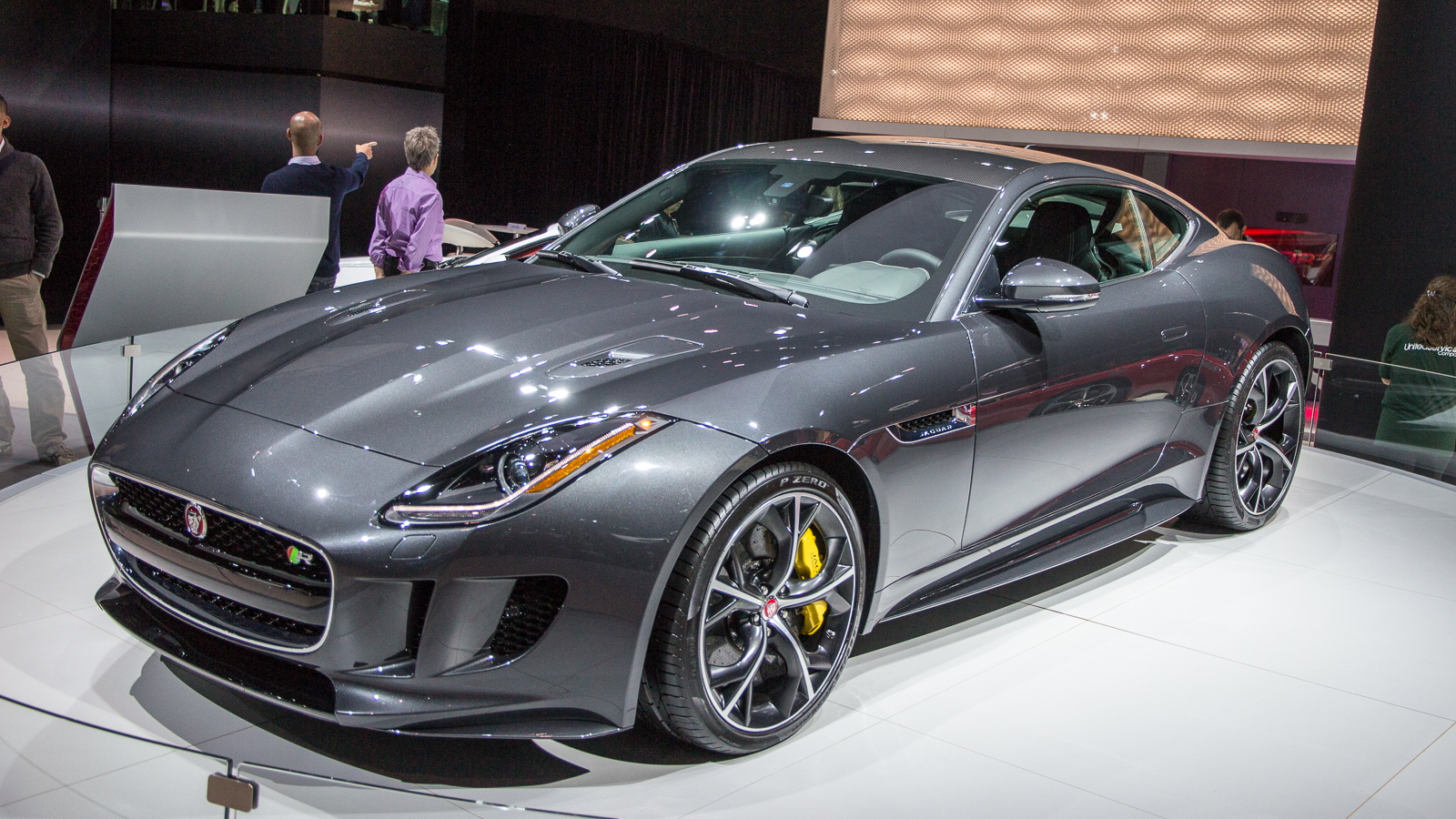 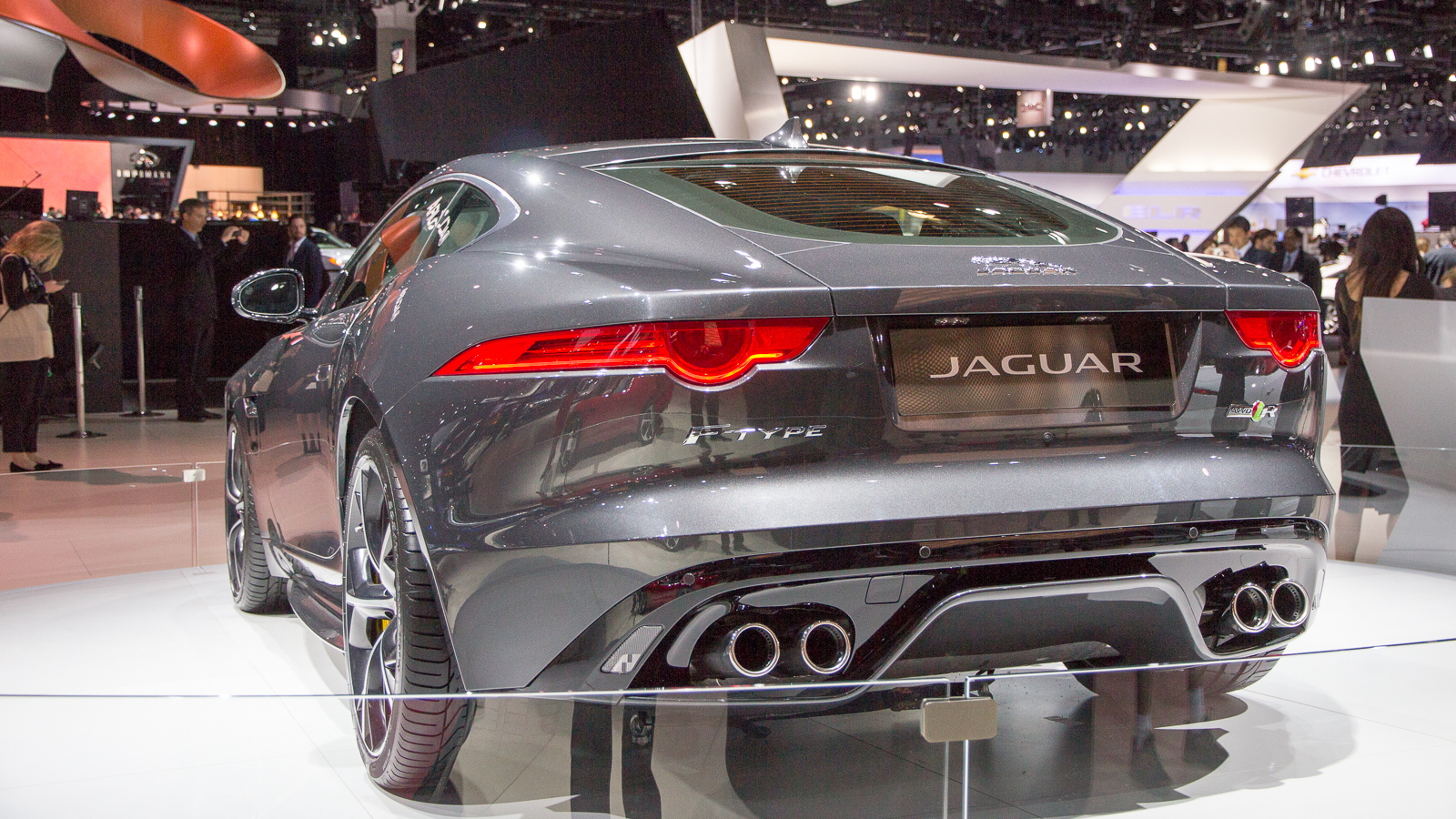 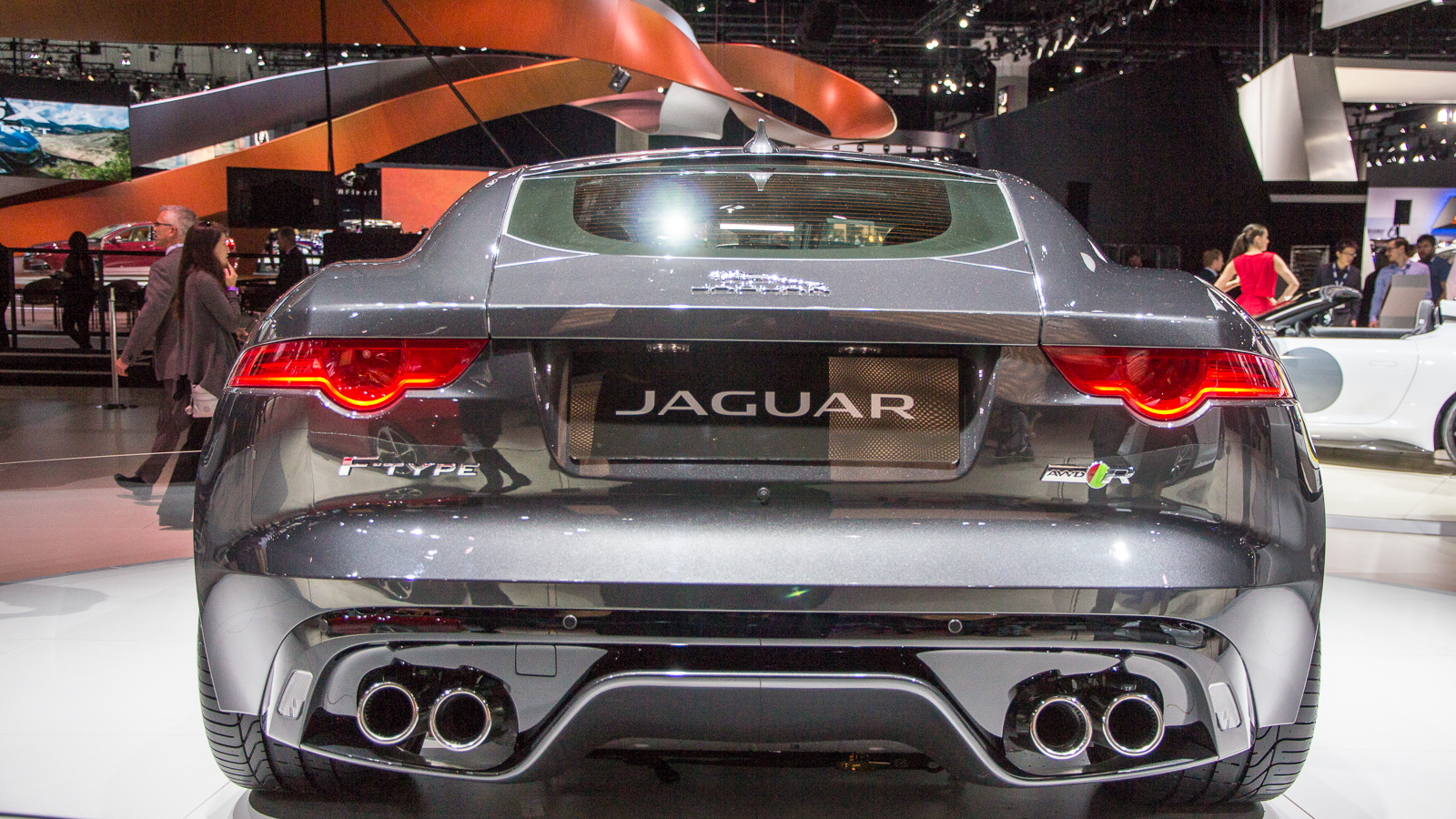 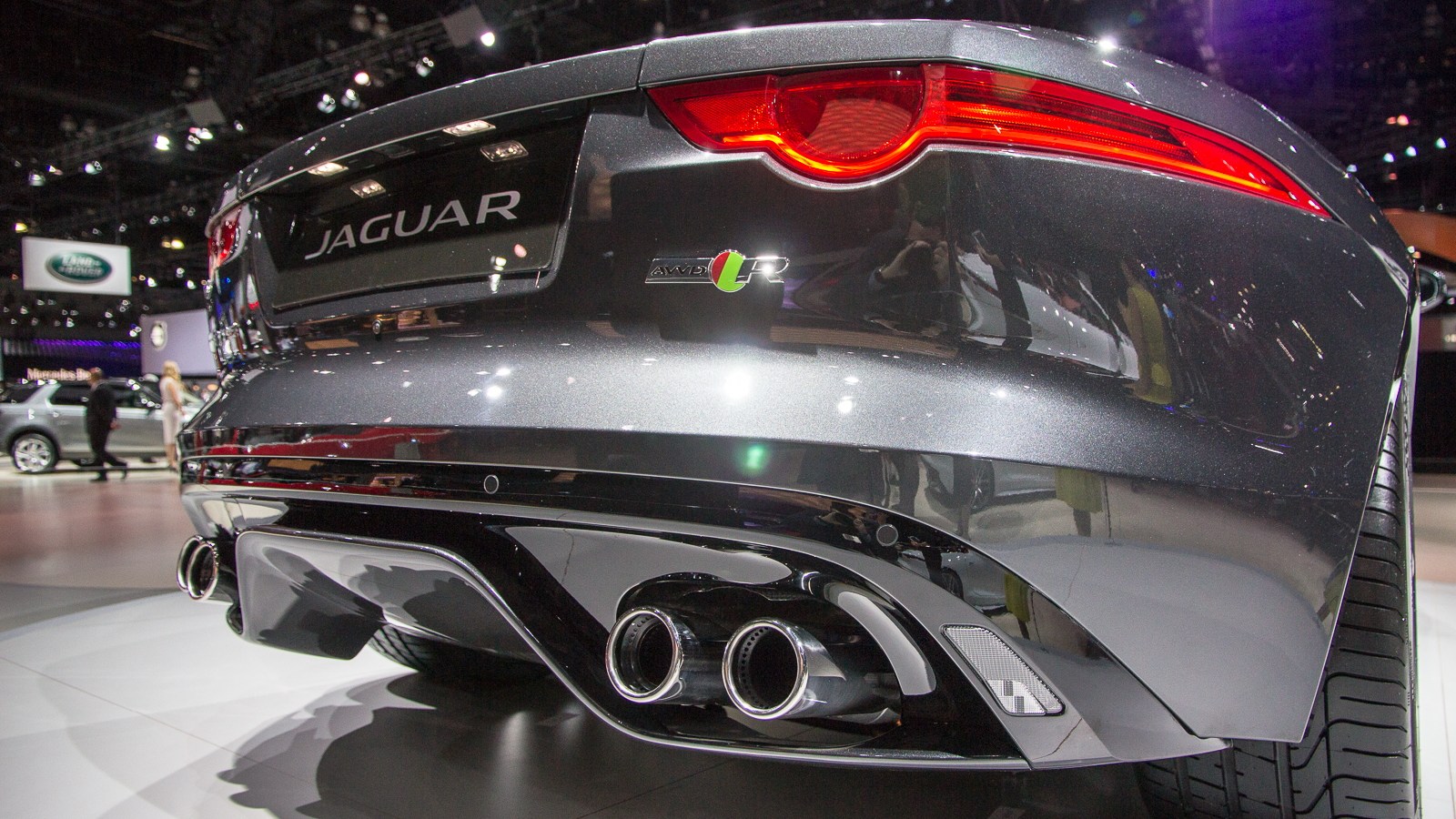 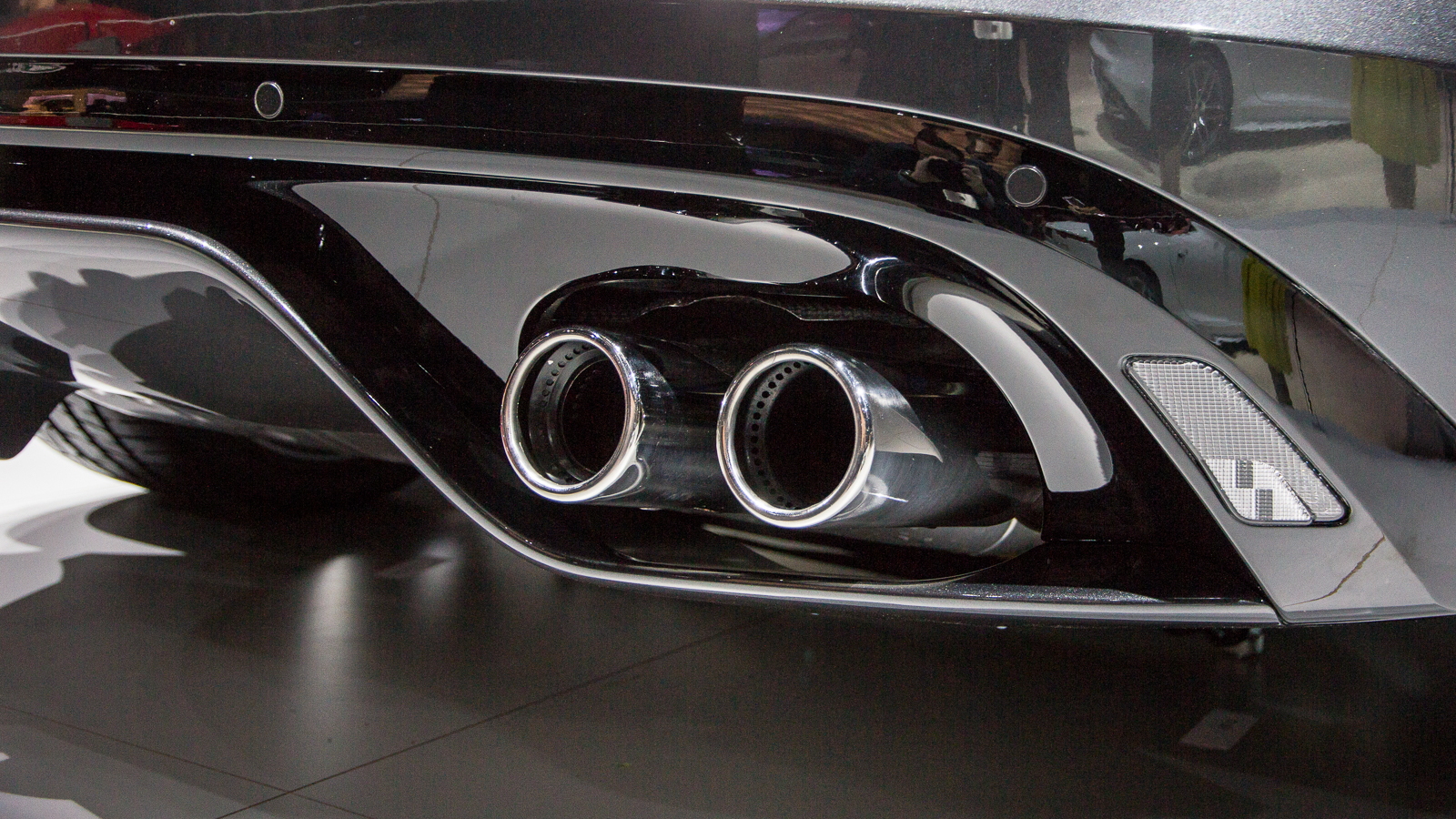 56
photos
Jaguar’s F-Type has only been on the scene since the 2014 model year but the vehicle has come in for some substantial updates, which are being introduced for the 2016 F-Type going on sale next spring. The big news is the addition of an all-wheel-drive system, which Jaguar has confirmed will be standard on all F-Type R variants and an option on F-Type S variants. One other major announcement is the availability of a manual transmission, a six-speed unit that at present is only being offered on rear-wheel-drive F-Types equipped with a V-6 engine.

No changes have been made to the power trains, so the F-Type R’s supercharged 5.0-liter V-8 is still pegged at 550 horsepower and 502 pound-feet of torque. Thanks to the added traction of all-wheel drive, plus its quick-shifting eight-speed automatic, the vehicle will sprint to 60 mph from rest in just 3.9 seconds on the way to a maximum top speed of 186 mph. The V-6-powered F-Type and F-Type S continue with a supercharged 3.0-liter V-6, rated at 340 and 380 hp, respectively.

Jaguar has labeled its all-wheel-drive system Instinctive All Wheel Drive. The system works together with another feature called Intelligent Driveline Dynamics (IDD), which helps optimize torque distribution depending on the situation. Normally, 100 percent of the torque is transferred to the rear wheels for that classic rear-drive feel, but when slip is detected electronically-controlled center coupling can transfer up to 50 percent of the engine’s torque to the front axle. IDD also controls the amount of torque being delivered by the engine as well as the rear differential, working closely with the vehicle’s electronic stability control system.

This detailed monitoring of the vehicle’s dynamics enables optimized torque distribution across the rear axle, and from front to rear. The result is improved agility and steering response, enabling higher entry speeds and allowing the driver to put power down sooner when it’s time to exit a corner.

As for the manual, it features a short-throw gear lever with a travel of only 1.77-inches, closely-spaced ratios, and pedals well placed for heel-and-toe changes. Like the F-Type’s auto, the manual transmission has also been sourced from ZF and can be fitted with either the base F-Type or F-Type S, though only with rear-wheel drive. The engine ECU provides a speed matching function on upshifts, making each gear change smoother, and a hill hold function has also been installed to help prevent stalling on those steep roads.

“Our target with engineering the all-wheel-drive F-Type was to maintain that engaging rear-drive character that’s so important to Jaguar sports car DNA, and offer even greater dynamic capability,” Jaguar Vehicle Line Director Ian Hoban said at today’s reveal. “With the manual transmission option for the V-6-powered F-Type models, we’ve gone to intricate lengths to engineer a very precise, technical and responsive level of interaction between the driver, the clutch and the transmission shift mechanism—it’s one for the driving purist.”

The list of updates doesn’t end there, however. Also new for the 2016 model year is an F-Type R Convertible (previously only an F-Type R Coupe was available), a new electronic power steering system, Jaguar Land Rover’s latest InControl infotainment system, and the Meridian sound system made standard across the range.

The electronic power steering system designed for the F-Type has been in the making for several years. Jaguar says the system is now comparable to its hydraulic power assistance previously fitted to the F-Type when it comes to expected response and feel. Advanced control algorithms ensure that the F-TYPE steering is free from any trace of the synthetic feel which can taint some such systems. The software even compensates for differences in ambient temperature, ensuring absolute consistency in the feedback the driver gets through the wheel.

Hardware improvements were also implemented. Increasing the torsional stiffness of the steering column intermediate shaft helped to deliver the on-center feel needed to achieve our demanding targets. And compared to the hydraulic systems, which constantly use power from the engine, the electronic system only uses electrical energy when assistance is needed, thereby reducing fuel consumption.Finally, Jaguar has announced its new InControl infotainment system for the F-Type. Already announced for the 2017 XE sedan, the InControl suite of connectivity, telematics and infotainment systems offer increased functionality, from smartphone apps and emergency services to remote engine starts.For more 2014 L.A. Auto Show coverage, head to our dedicated hub.