Chevrolet has revived its Cheyenne name, first used as a trim package for its C/K pickup back in 1971 and more recently in 2003 for a forward-looking pickup concept. The latest use of the name is for another concept, this time a performance-oriented version of the 2014 Silverado regular cab.

The concept is called the Chevrolet Silverado Cheyenne, and it will be gracing the stands of the bowtie brand at this week’s SEMA show in Las Vegas. Using the old adage of performance through less weight, Chevy engineers have taken the Silverado and reduced its weight via a number of measures typically reserved for high-end sports cars.

The measures include replacing the bumpers, tailgate and inner cargo box with carbon fiber, helping to shed around 200 pounds from the 4,503 pounds of the Silverado regular cab with a 5.3-liter V-8 and 6’6” box. The concept also gets a more potent 6.2-liter V-8 good for 420 horsepower.

More weight savings come from the removal of the Silverado’s trailer hitch, spare tire, interior center console and some of the sound-deadening material. The concept also has a lightweight aluminum driveshaft and composite rear leaf springs. The suspension has also been lowered and reinforced with a new stabilizer bar at the rear. 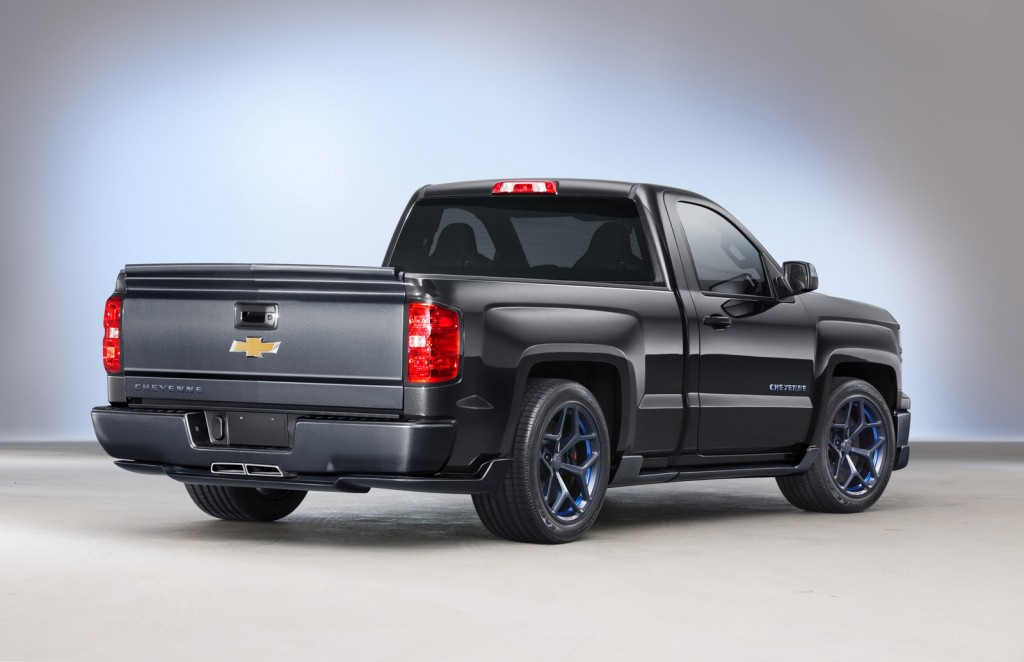 Other additions include a functional aero kit made from carbon fiber, a vented hood, Brembo carbon ceramic brakes and 19-inch alloy wheels, all of which have been inspired by items on Chevy’s Camaro Z/28 track weapon.

Inside, the concept’s performance theme is continued with Recaro bucket seats, a flat-bottom steering wheel, and a backup camera.

There's been much talk of Chevy considering a rival to Ford’s F-150 SVT Raptor performance pickup, which has proven a runaway success for the Blue Oval. Now we have the first tangible evidence Chevy is seriously looking at launching a performance pickup of its own. Chevy is calling its Silverado Cheyenne a concept, but the company admits it’s continually exploring new ways to expand the Silverado lineup. Should the concept garner enough attention at this week’s SEMA show, we could very well see a tamer production version in the not too distant future.

For more from the 2013 SEMA show, visit our dedicated hub.