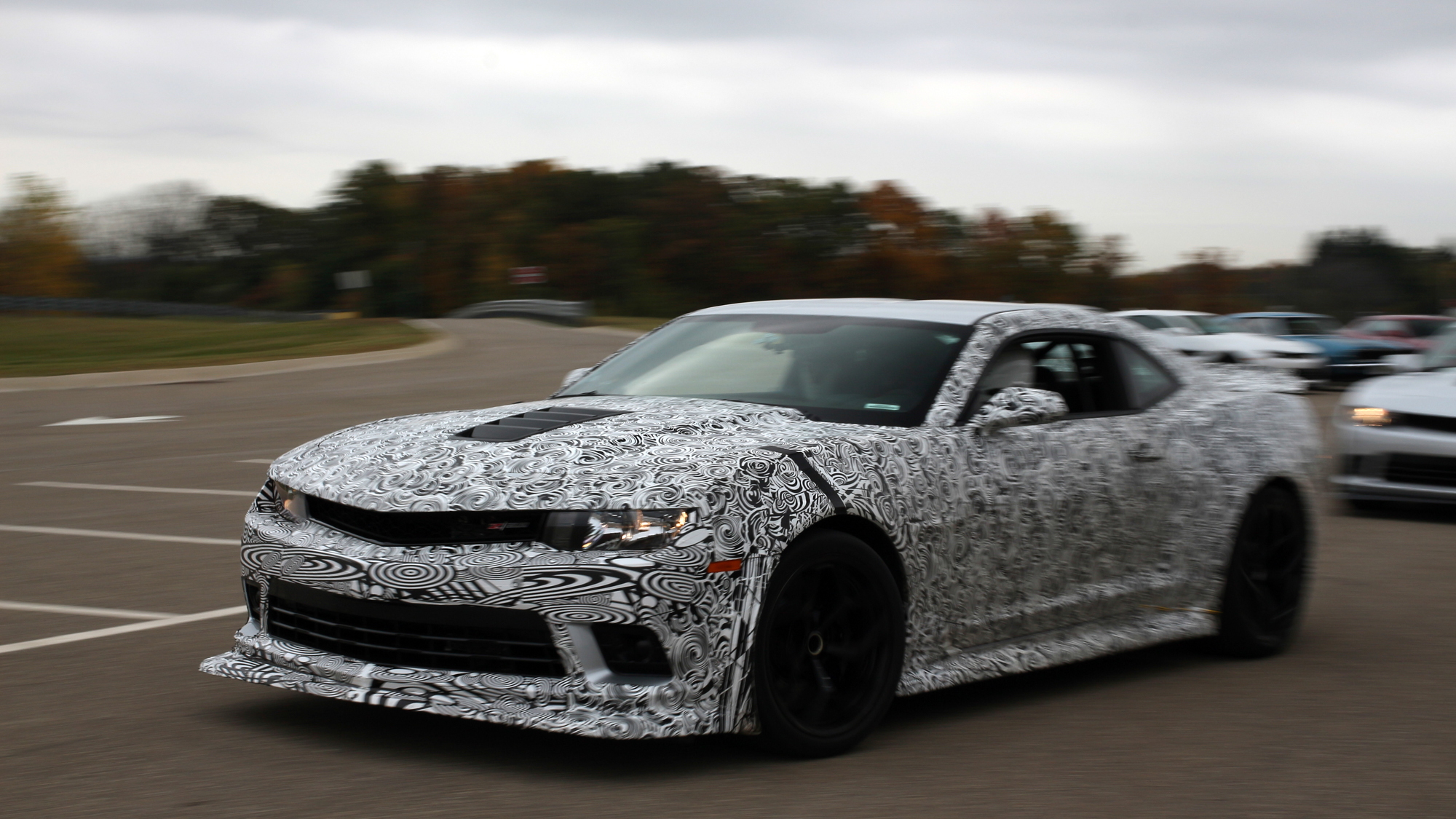 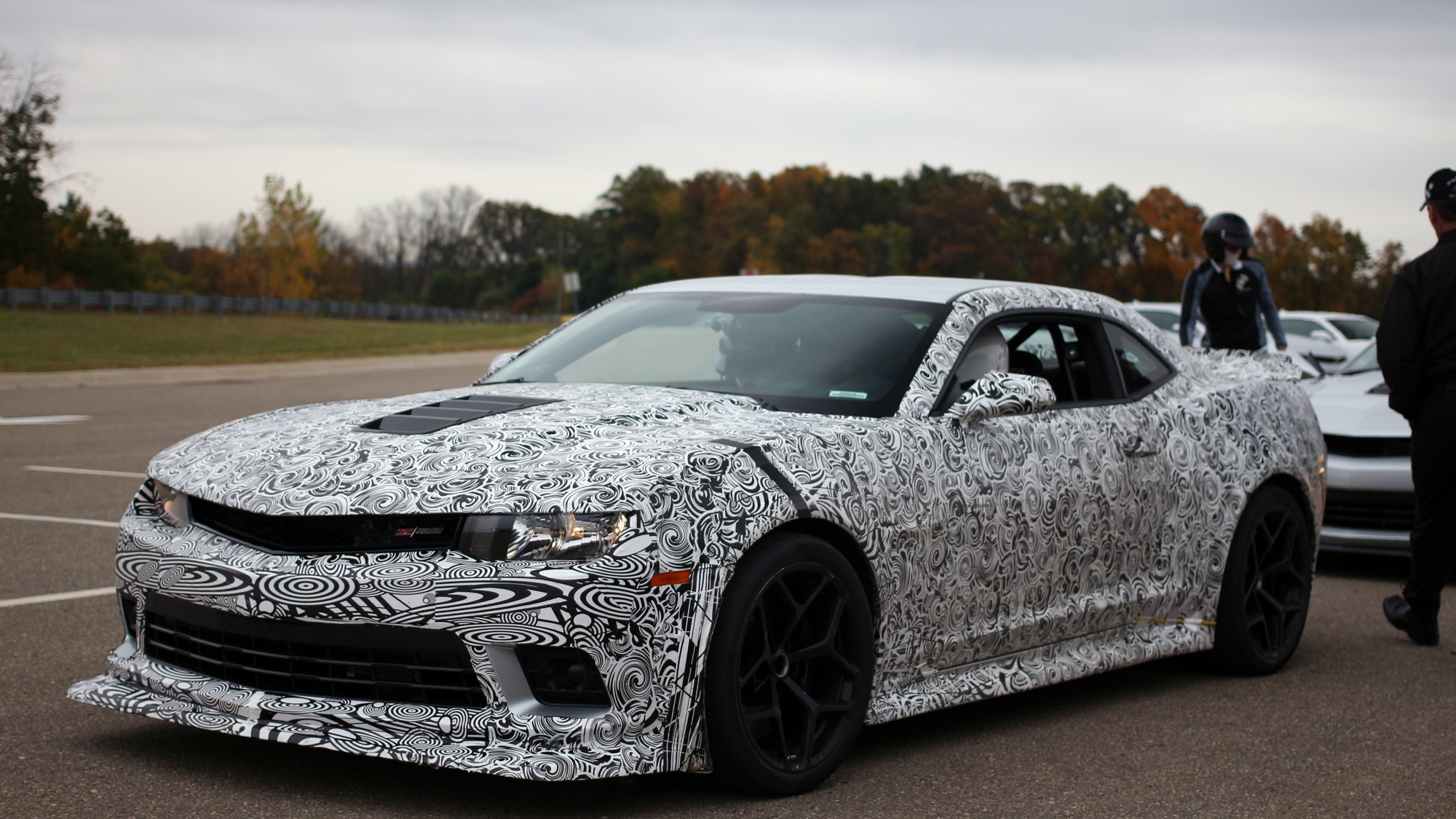 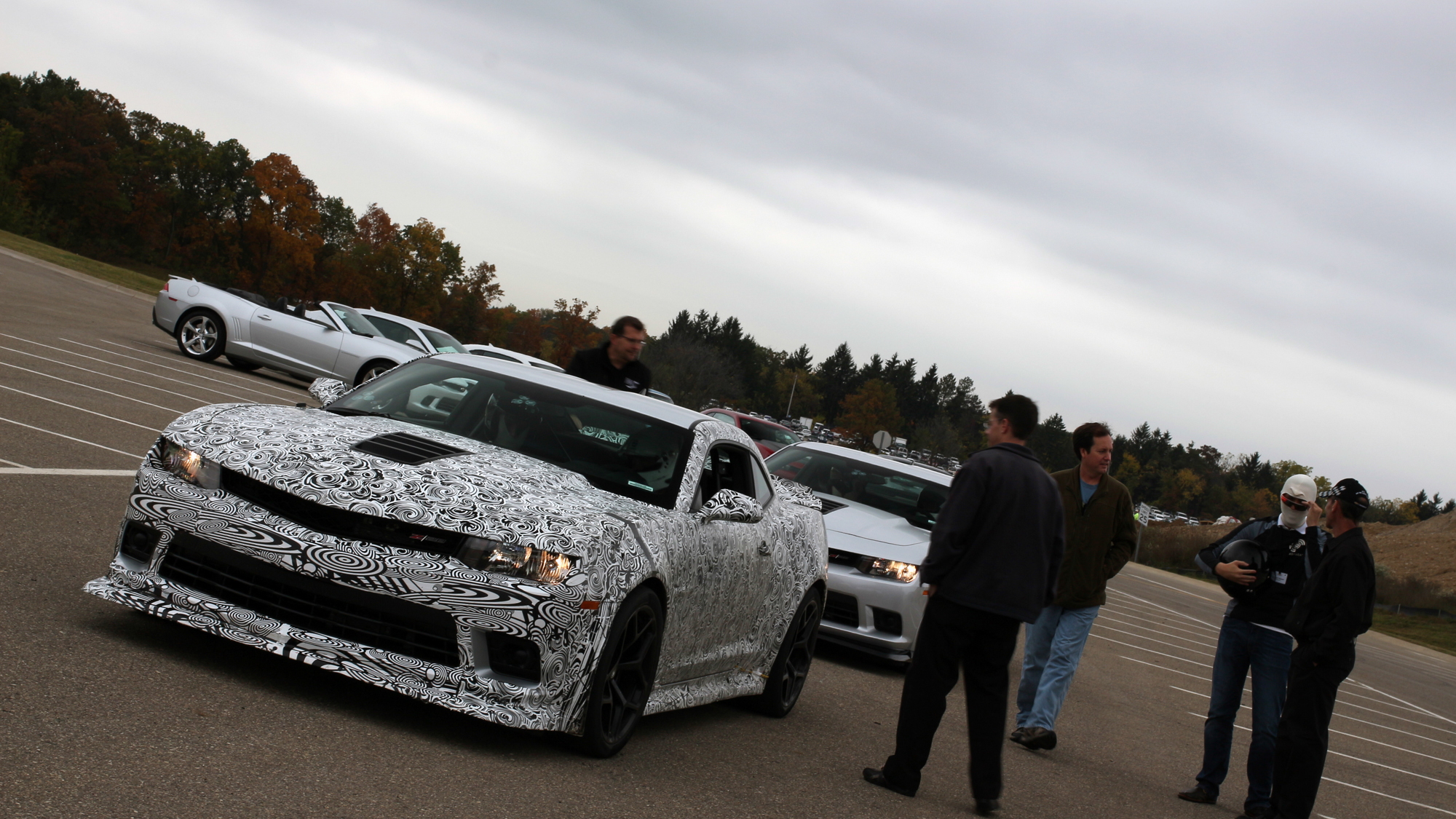 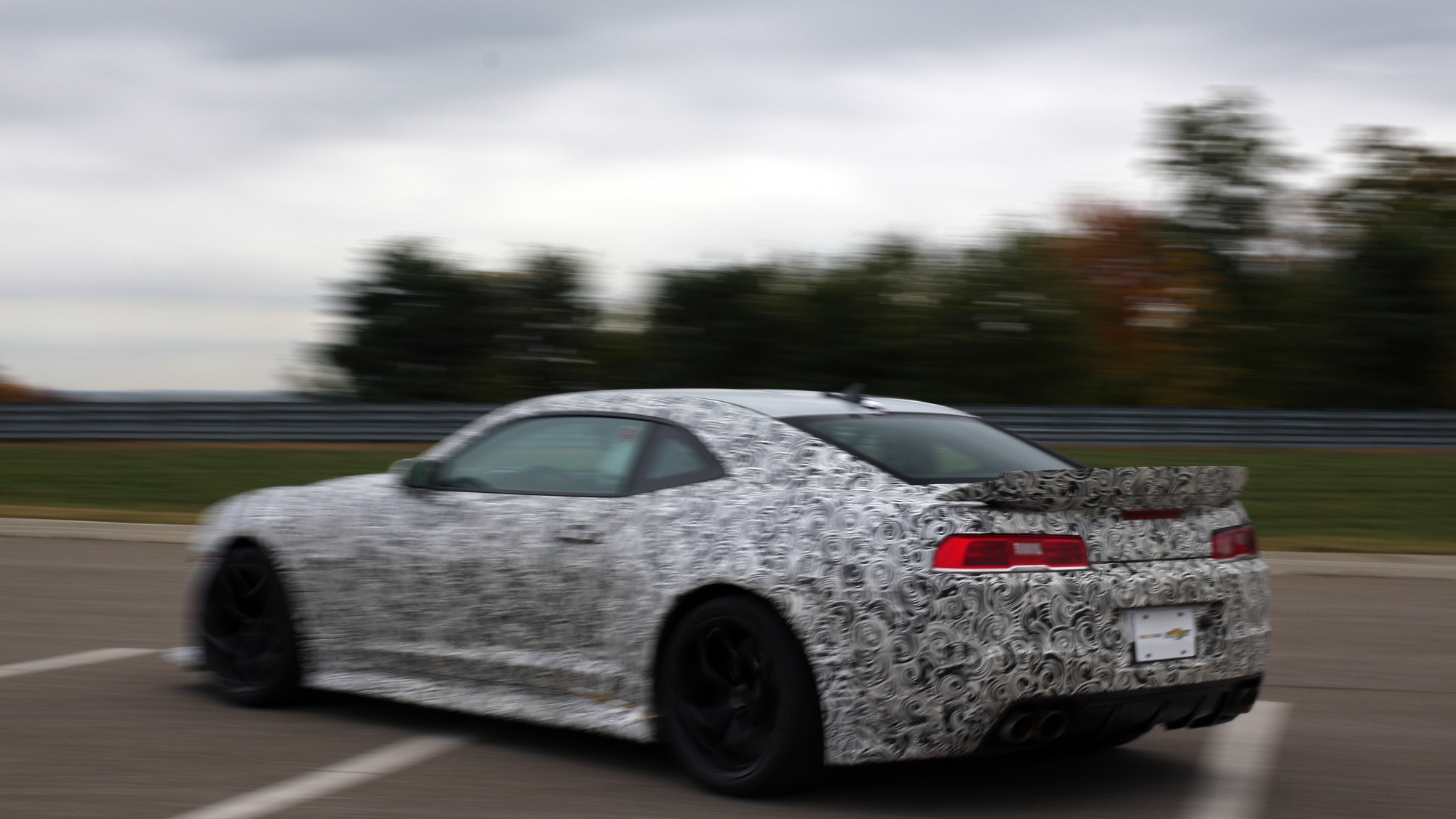 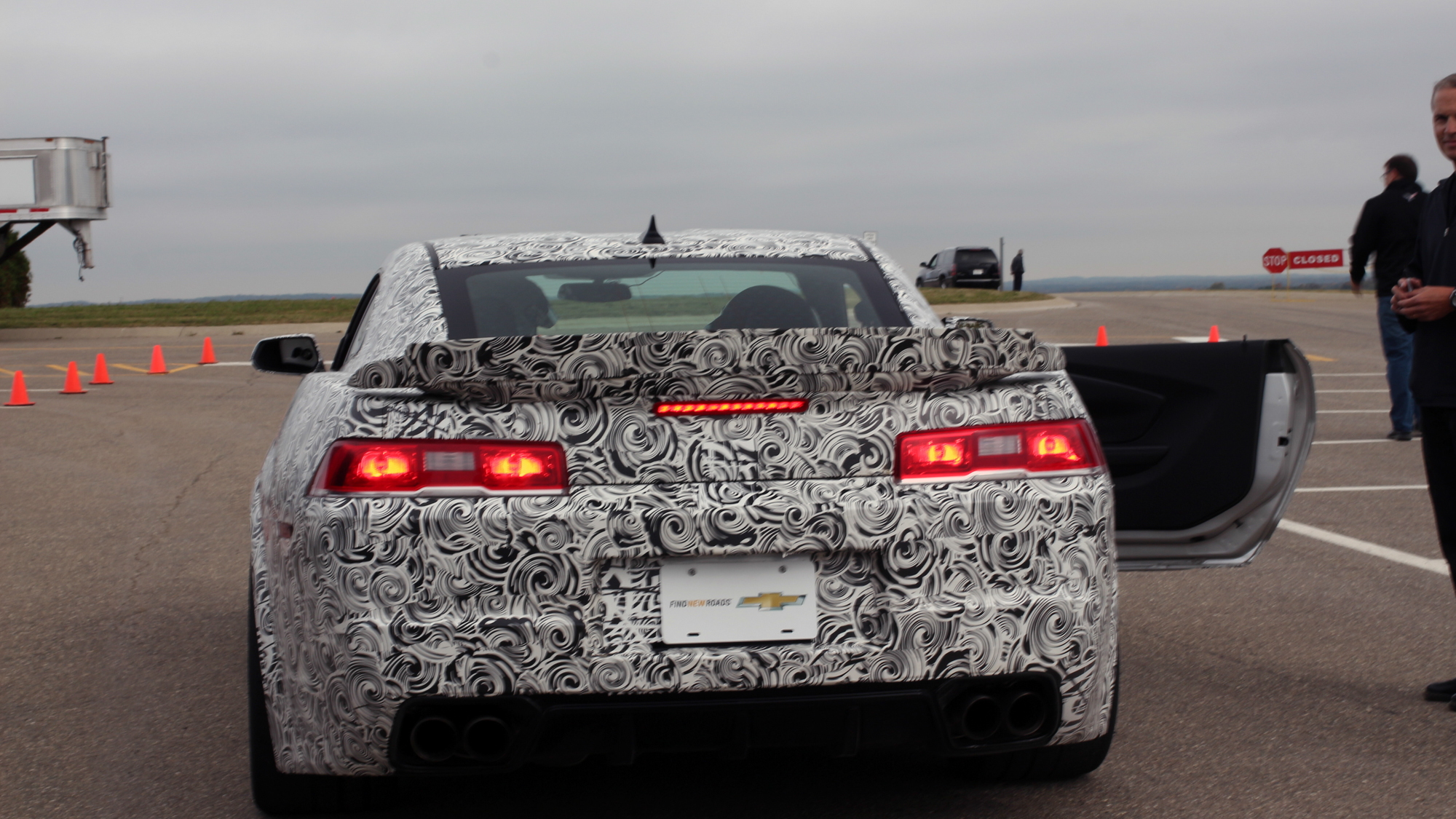 We were told that the automaker would only bring back the Z/28 moniker if there was a car that warranted the badge. You can't simply slap together a few performance bits, gather some marketing folk to drum up a cliche-laden press release, and then shove a poorly thought out machine down the throats of the waiting Bow Tie-brand fans.

No, General Motors knows they need to deliver something special with a modern Camaro Z/28. The world wants to know if they've done that… and the answer is holy hell yes.

Let's get something straight right from the outset. Chevrolet hasn't created a daily driver dream machine. Unless of course, your preferred dream consists of a race-derived dynamic spool suspension system, no air conditioning, massive carbon ceramic brakes, and R compound barely legal street tires. Wait, this is Motor Authority, right? Then that is exactly what you've been dreaming about.

The boffins at Chevy want us to know that this is a track-focused machine, which happens to be street legal and can therefore be driven to and from the track. If you glance really quickly, you might think you're looking at your average Camaro that's wearing a few basic body modifications. Look again, look harder, and look longer. All of the body bits you see on the car create downforce. So much, in fact, that the Z/28 creates an additional 400 pounds of downforce compared to the Camaro SS. This happens thanks to the massive front splitter, the heat extractor in the hood, the side sills, and large rear spoiler. Additionally, there are underbody aero bits that also work to keep the car glued to the road.

Chevrolet knew they wanted to make this a lightweight dancing queen. That's why the automaker opted for the LS7 instead of the LSA. It's a 7.0-liter V-8 engine that producer 505 horsepower and 481 pound-feet of torque, and it also happens to be 63 pounds lighter than the LSA. A majority of that torque is available between 1,250 rpm and 2,000 rpm, with peak torque occurring up at 4,800 rpm. Peak horsepower is produced at 6,100 rpm.

It's not just the motor that makes with the magic, however, as Chevy engineers were focused on making the Z/28 a well-rounded track machine. This means they had to pay serious attention to the brakes, suspension, and tires. Not only did they pay attention, but they turned to companies with expert knowledge on these subjects for help. For example, Brembo supplies the standard carbon ceramic brakes. Up front sit a pair of massive 15.5-inch rotors with six-piston calipers, while the rear units are 15.3-inch rotors clamped down upon by four-piston calipers.

For the rubber that meets the road, Chevrolet turned to Pirelli. What Pirelli came back with are the largest front tires ever fitted to a production car. The Camaro Z/28 wears 305/30-ZR19 Pirelli Trofeo R tires at each corner, which basically means that Chevy has brought a rubber gun to a rubber knife fight. Some might see this as cheating, but we think it's picking the best tool for the task at hand… which is creating a wickedly fast track assassin.

Even more impressive than the brakes and tires, however, is the suspension setup. It's clear that Chevrolet went above the call of duty by turning to Brembo and Pirelli for braking and tire needs. When it comes to the suspension though, the automaker has soared above the call of duty and is now forging new ground in the production car world. Chevy teamed up with a company by the name of Multimatic to develop the ride and handling of the Z28. Does that name not ring a bell? Well, it should because Multimatic created a new suspension system back in 2002 that has taken the motorsports world by storm.

It's called the Dynamic Suspension Spool Valve system, or DSSV for short, and it allows engineers to produce the exact amount of compression and rebound predictability, repeatability, and accuracy that a given car needs. The system works so well that many racing teams have adopted the technology. We're not talking about LeMons or ChumpCar teams here.

A number of the top Formula One teams rely on this technology, including Red Bull Racing, which means the Multimatic system could claim a part of the 2008, 2010, 2011, 2012, and (most likely) the 2013 F1 Constructor's Championship. There are also many LMP teams running the system, with 20 of the 56 entries for the 24 Hours of Le Mans utilizing DSSV dampers.

The only other production car ever to take advantage of this setup was the Aston Martin One-77. That's an ultra-exclusive hyper car costing well over one million bucks. Now, it's the standard suspension setup of the Camaro Z/28. Chevrolet isn't messing around here.

Multimatic is hoping that Chevrolet helps bring the DSSV damper system to a wider audience and it should once you dive a bit deeper into what it can do. According to Multimatic, when an automaker designs a damper system for a car, they want to be able to repeat their initial results with a 10 percent margin of error across production. On the other end of the scale, F1 teams need that margin of error down to just a half a percent. The Z/28 rings in at two percent.

This car is officially dialed in.

The Camaro Z/28 can easily and comfortably exceed 1g in corners. It can accelerate hard thanks to both its engine and its extensive weight savings over the standard Camaro SS. It can also run harder into corners and then brake later before applying clipping the apex and getting back on the power. This all helps add up to the potential for some seriously fast lap times. It also makes one hell of a noise.

But what does all of this actually mean? It means that the 2014 Chevrolet Camaro Z/28 isn't aiming to take on the likes of the Ford Mustang, it's forever nemesis. The Z/28 wipes the floor with every current Mustang you can buy. Yes… even the Boss 302 Laguna Seca. Chevrolet ran a handful of Mustang and Camaro variants at its own Milford Proving Grounds Road Course, which mimics a number of turns from well known racetracks like the Nuburgring, and Spring Mountain Motorsports Ranch. Their drivers were told not to hold back, and we'll hold them to their word on this one. Here are the results:

Now, we'll reiterate that this was a home game for Chevy. The Milford Proving Grounds are where performance Bow Ties are born, breed, and educated. The deck is stacked in favor of the Z/28. To appease that argument, Chevrolet also boxed up the Camaro and shipped it to Germany. More specifically, the automaker and some of its finest drivers jumped in the good seat to set times at the Nurburgring. The fastest lap the Z/28 was able to run was a very impressive 7:37.40, which was enough to beat the times of the Porsche 911 and the Lamborghini Murcielago. Oh… and it was raining when Adam Dean laid down his fast video run.

The folks at GM tell us the unofficial fastest time set in the dry is in the 7:31 range. They can't come out and claim that, of course, because a 'Ring-Based gentleman's agreement says that it has to show up on video. So, the Chevy team plans to go back and get the time they feel the car deserves and is capable of hitting… with video proof.

Of course, a package like this won't come cheap. The ZL1 is now the second most expensive street-legal production Camaro. The Z/28 will slot above it in the price department. That's fine, since it slots above it in the overall performance department as well. Still, you're losing a few amenities you might be used to. Air conditioning is the only available optional extra. If you check that box, you also add in all of the extra speakers that Chevy took out, minus the one they left per the federal mandate for the chime that lets you know the door is open.

Chevrolet themselves have stated that this is a car they want purchased by people who are going to drive it hard on the racetrack. The automaker knows a few will be socked away by folks looking to get rich at Barrett-Jackson 2050, but that's not why this car has been created. The volume is low, with expected production to be in the 3,000 to 4,000 range over the course of two years. Chevy wants the majority of those buyers to be men and women looking to put a hardcore track machine in their garage, which can also be driven to and from the course.

For years now, the Camaro has been sort of falling by the wayside as the Ford Mustang progresses down the path from Pony Car to bonafide world-class sports car. Now though, it seems the Camaro has not only caught up… but blazed a path for both machines to follow. As they compete with each other, they will find new foes to battle from Germany and Japan…

The American Sports Car, led by the Camaro Z/28, has just declared a round of thermonuclear global war...