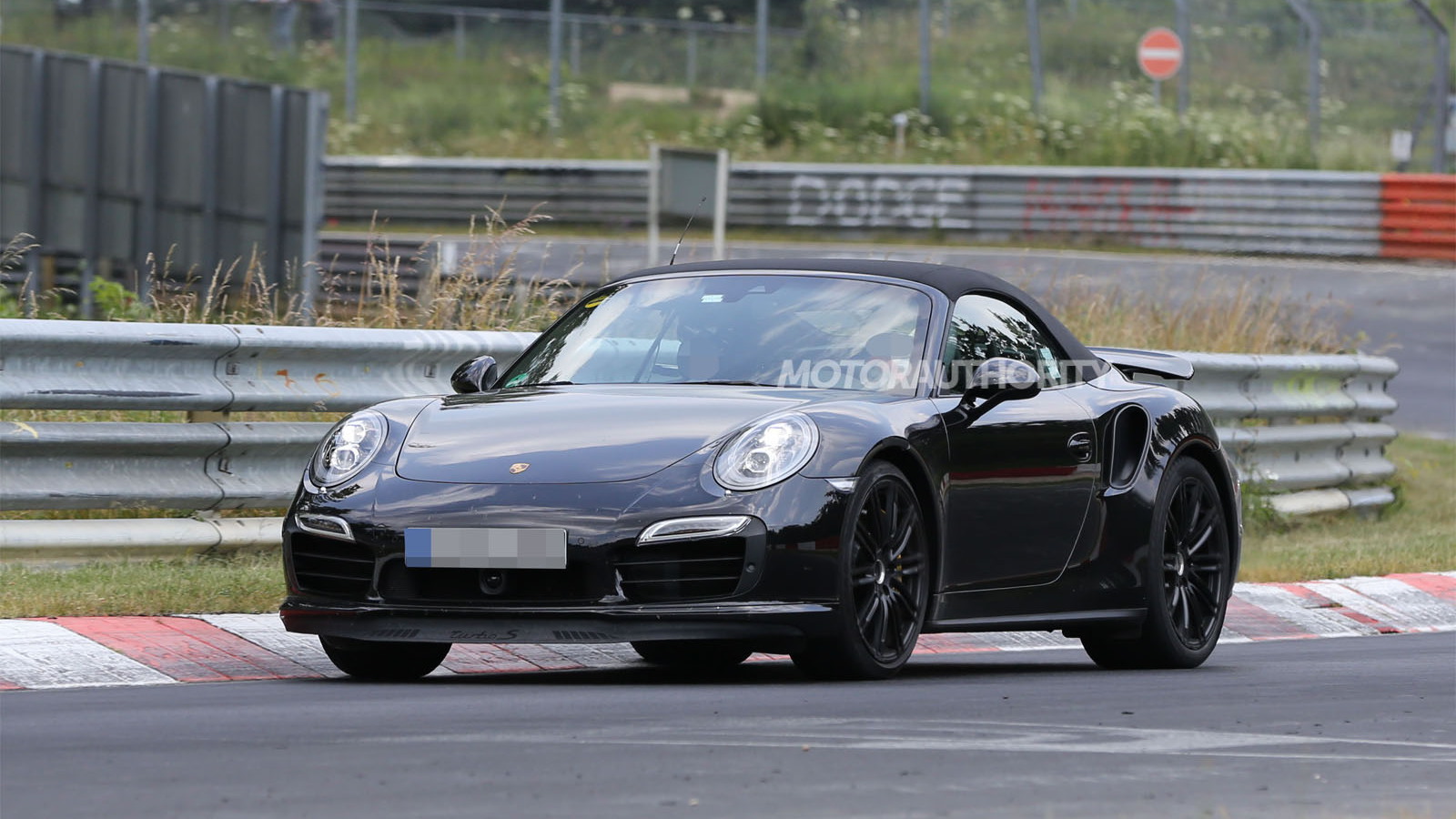 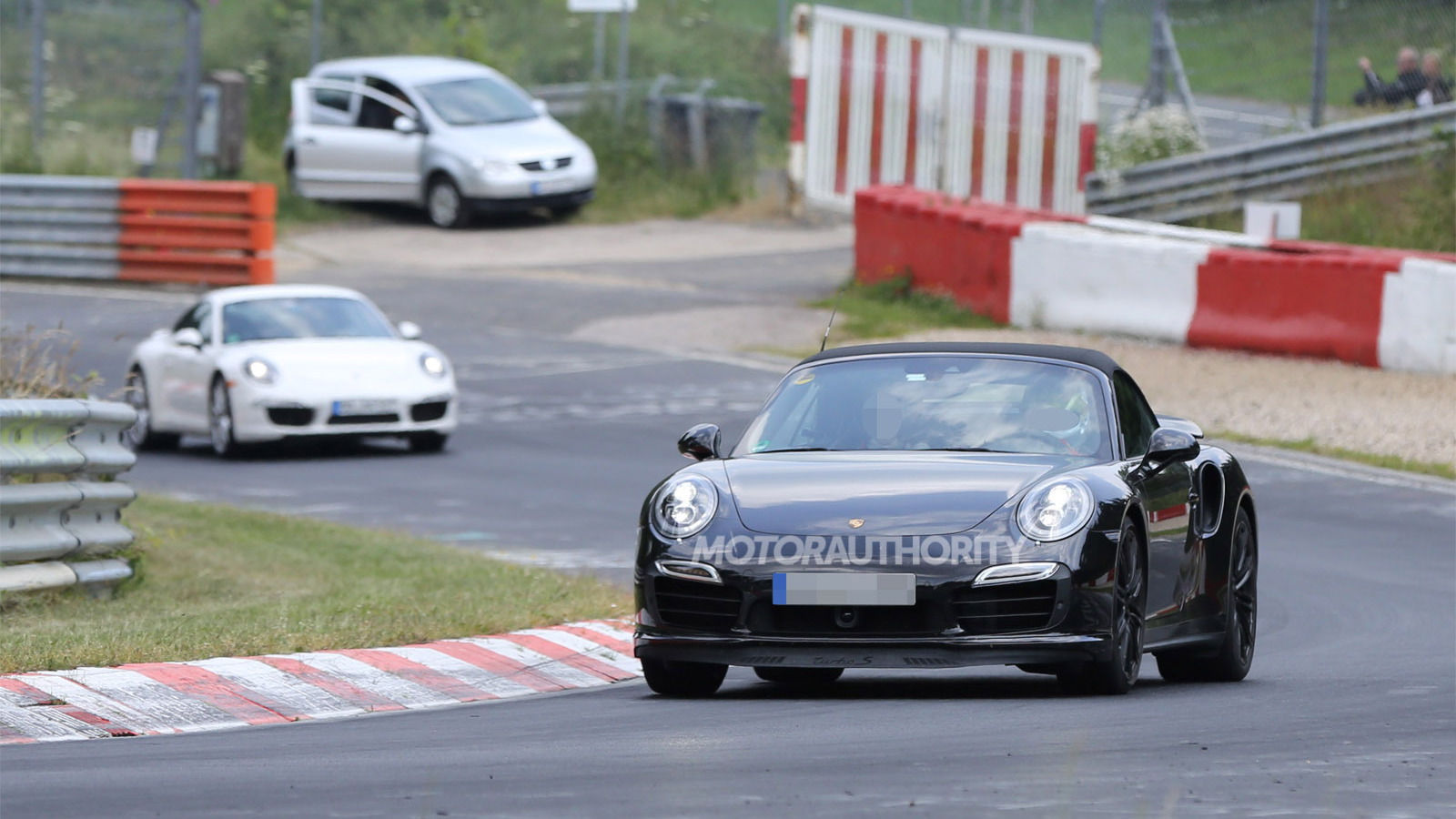 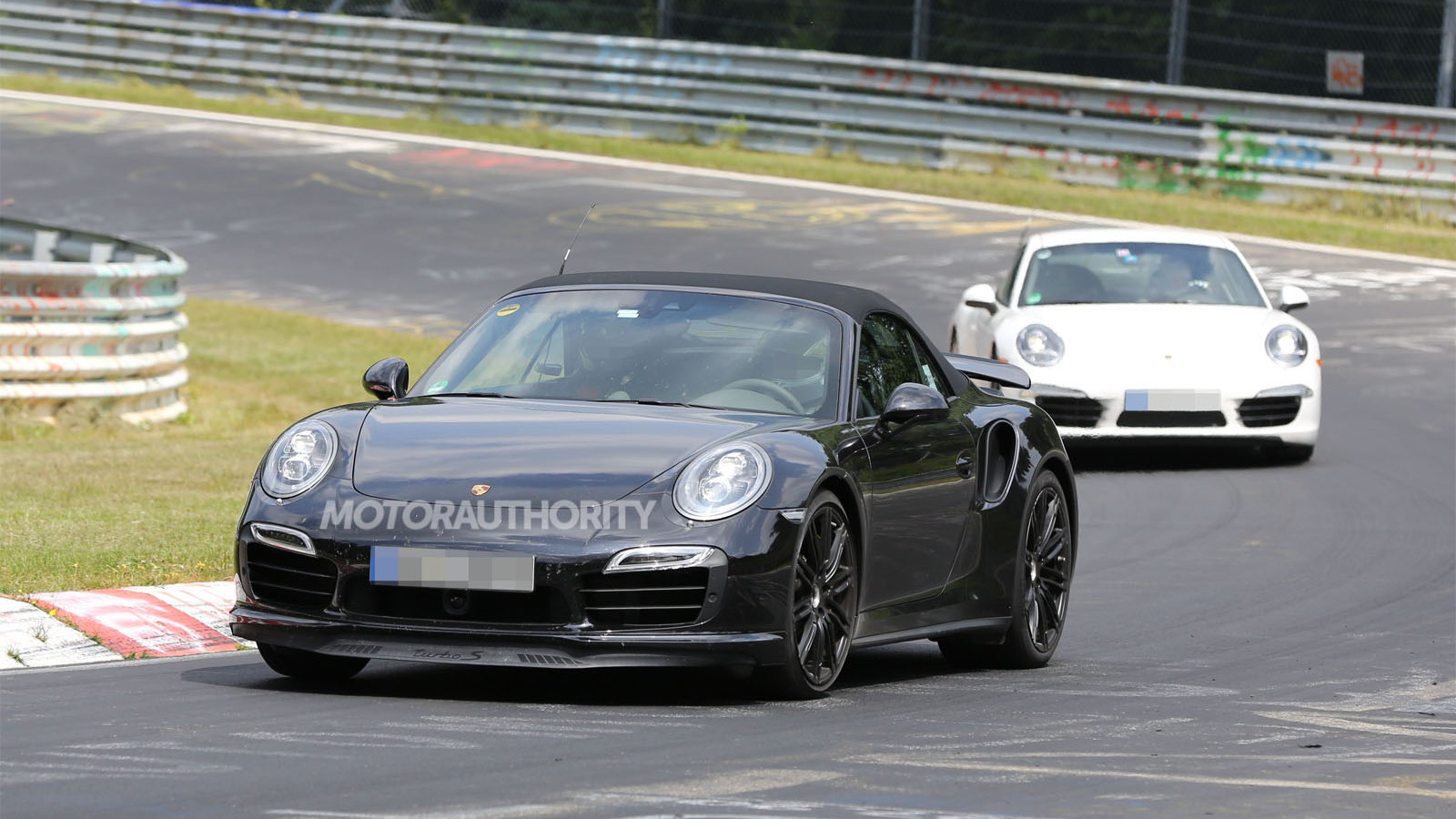 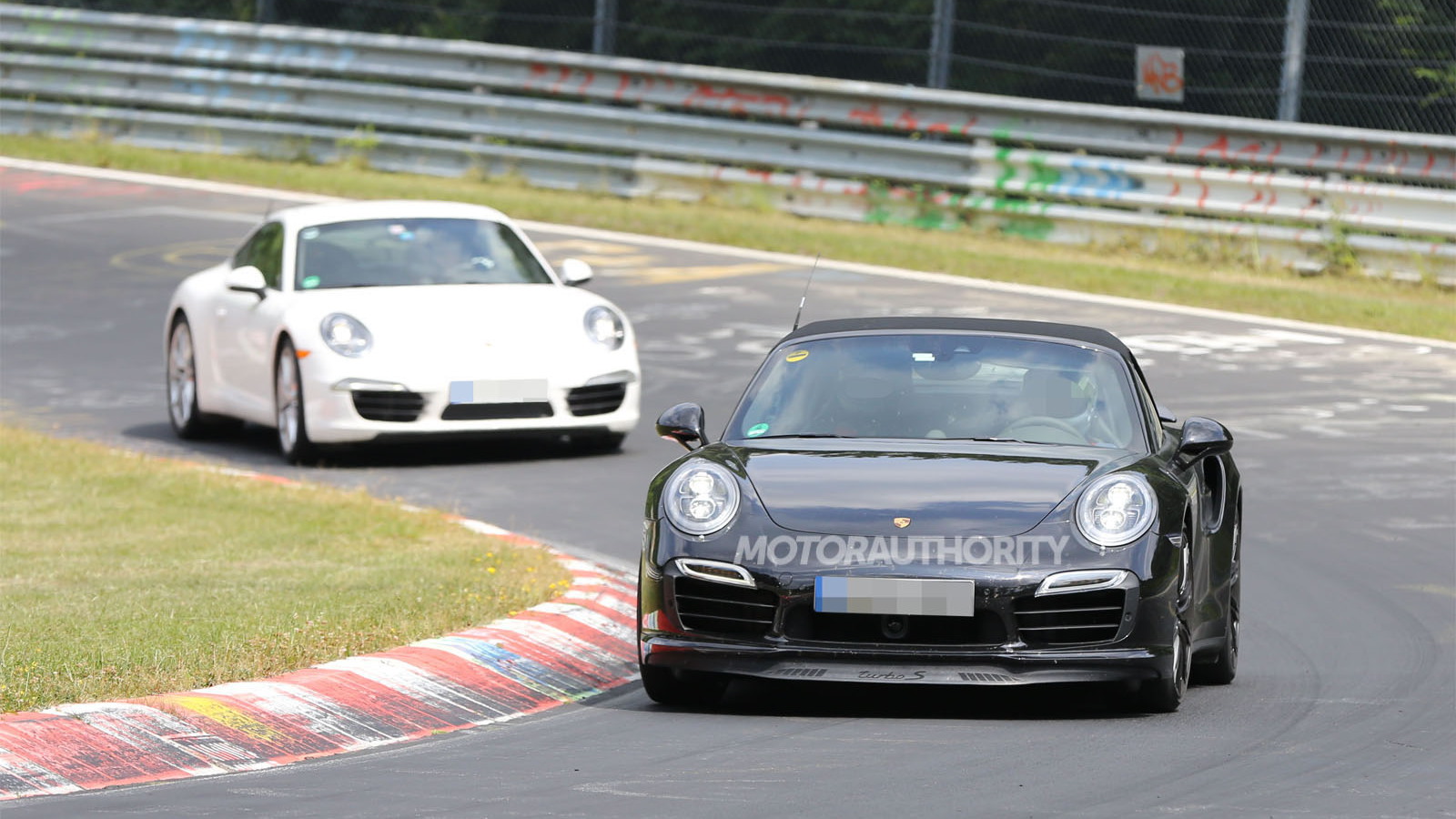 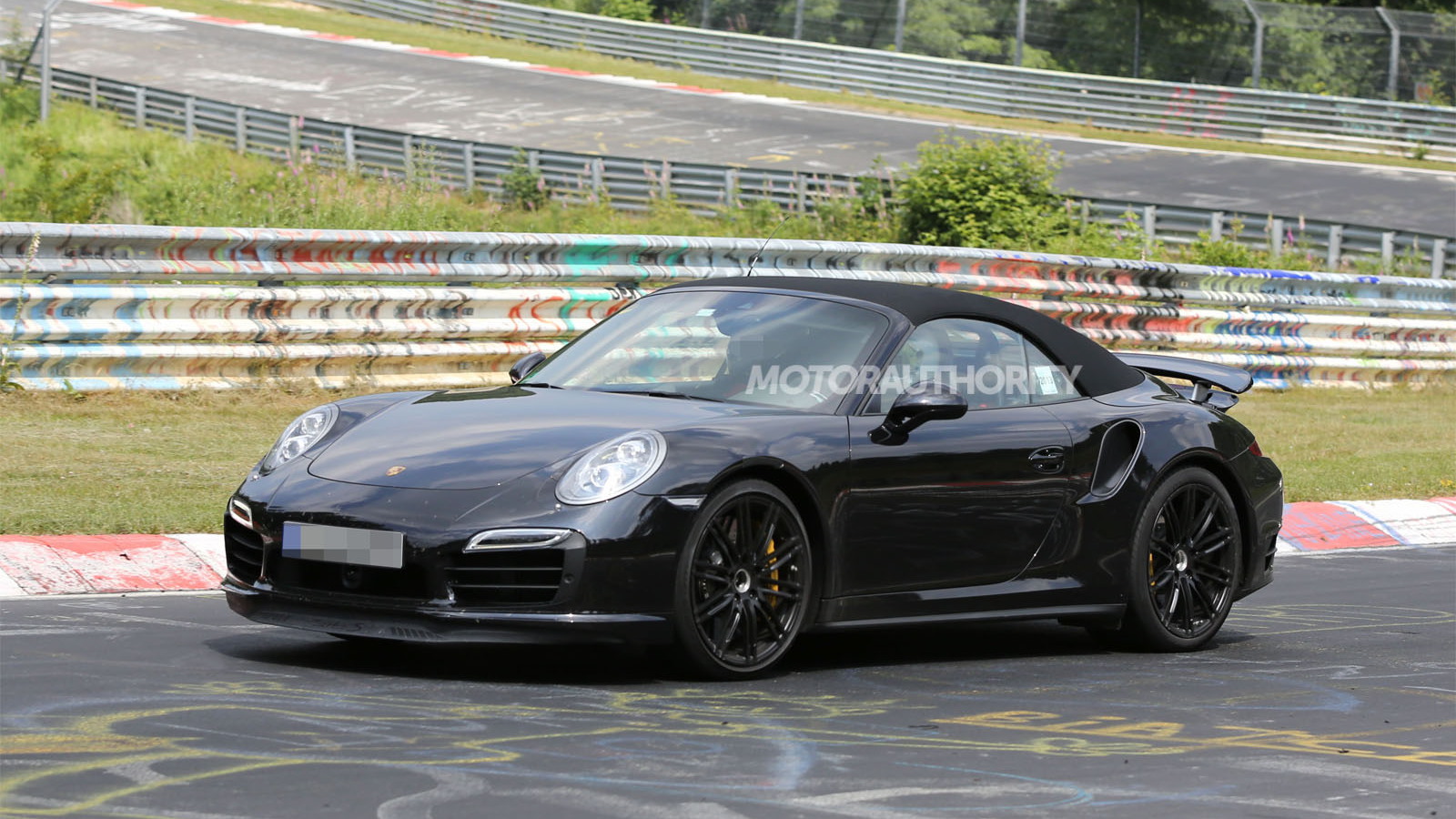 13
photos
With nimble handling, quick acceleration, and sharp new looks, even the base 991 Porsche 911 is a sports car aficionado's joy. We fully expect the 2014 911 Turbo S to border on mind-blowing.

The coupe version of the 2014 911 Turbo S was recently revealed alongside its standard (non-S) Turbo counterpart. The cabrio version of the next 911 Turbo Cabriolet has also been seen, through our spy shots. We expect the cabrios to follow their hardtop brethren to dealerships after a short gap, to go on sale later this year or early in 2014.

Fortunately, the exterior is completely undisguised, so we don't have to infer what it will look like; this is it. The larger, lower front spoiler is the primary tip-off that this un-badged car is the Turbo S soft-top.

So what can we expect of the 2014 911 Turbo S Cabriolet mechanically? It should share an engine with the Turbo S coupe, meaning a 3.8-liter flat-six engine good for about 560 horsepower thanks to direct injection and twin-turbocharging.

With the Sport Chrono package, the Turbo S coupe can accelerate to 60 mph in 2.9 seconds and hit 198 mph top speed; the cabriolet should come very close to these marks, though the additional weight and drag of the soft top may result in small tweaks to the final figures.

All-wheel drive is the standard, with shifts to be handled with a PDK transmission only, following the model of the Turbo coupe and 2014 911 GT3.

Other technological advances that should feature on the Cabriolet (they're already announced for the coupe) include: rear-wheel steering to enhance both low-speed and high-speed handling; all-LED headlights; center-lock wheels; a three-stage front and rear adjustable aerodynamics system; and a host of luxury features in the interior like 18-way adjustable seats and a choice of Bose or Burmester sound systems.