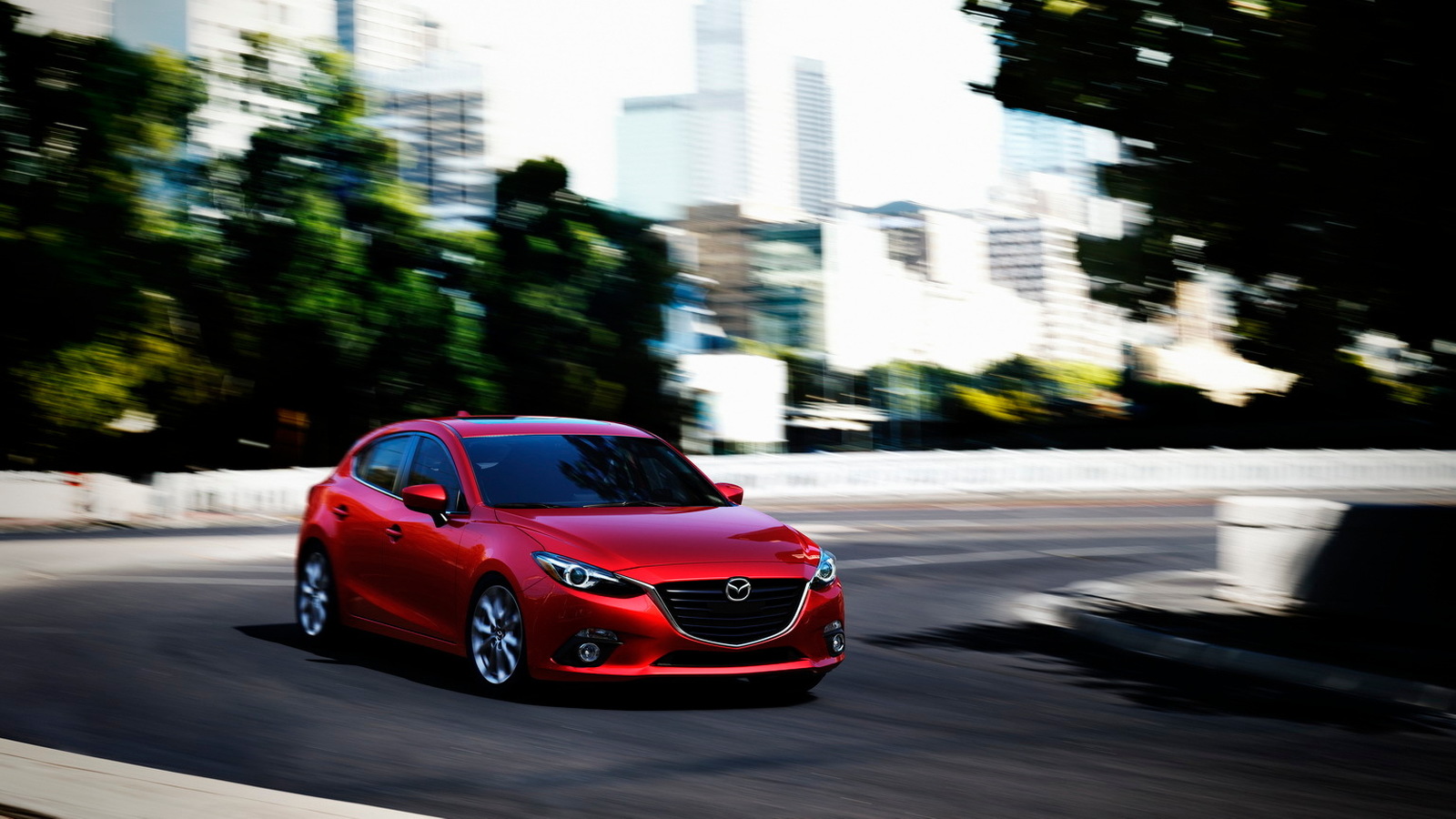 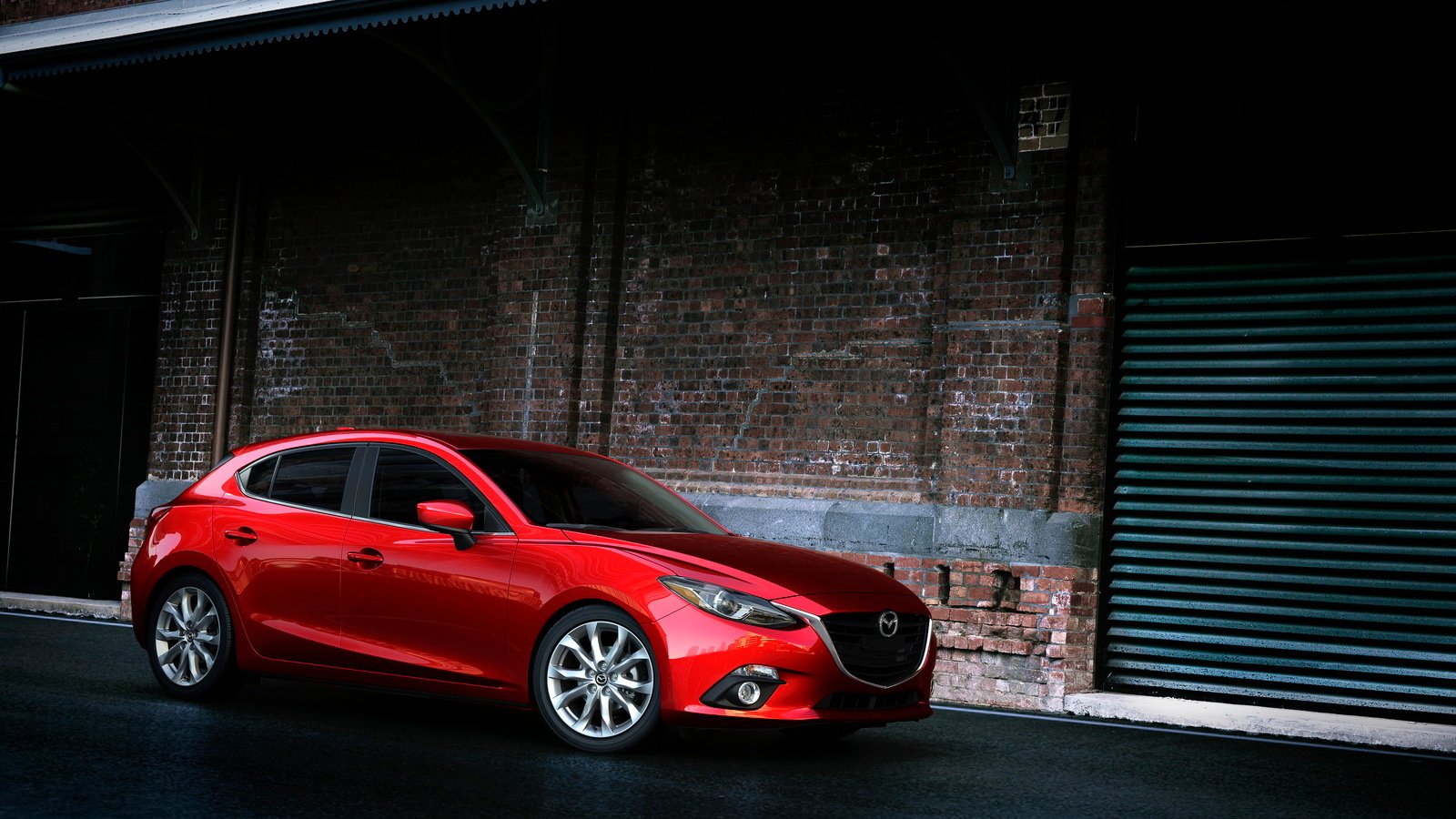 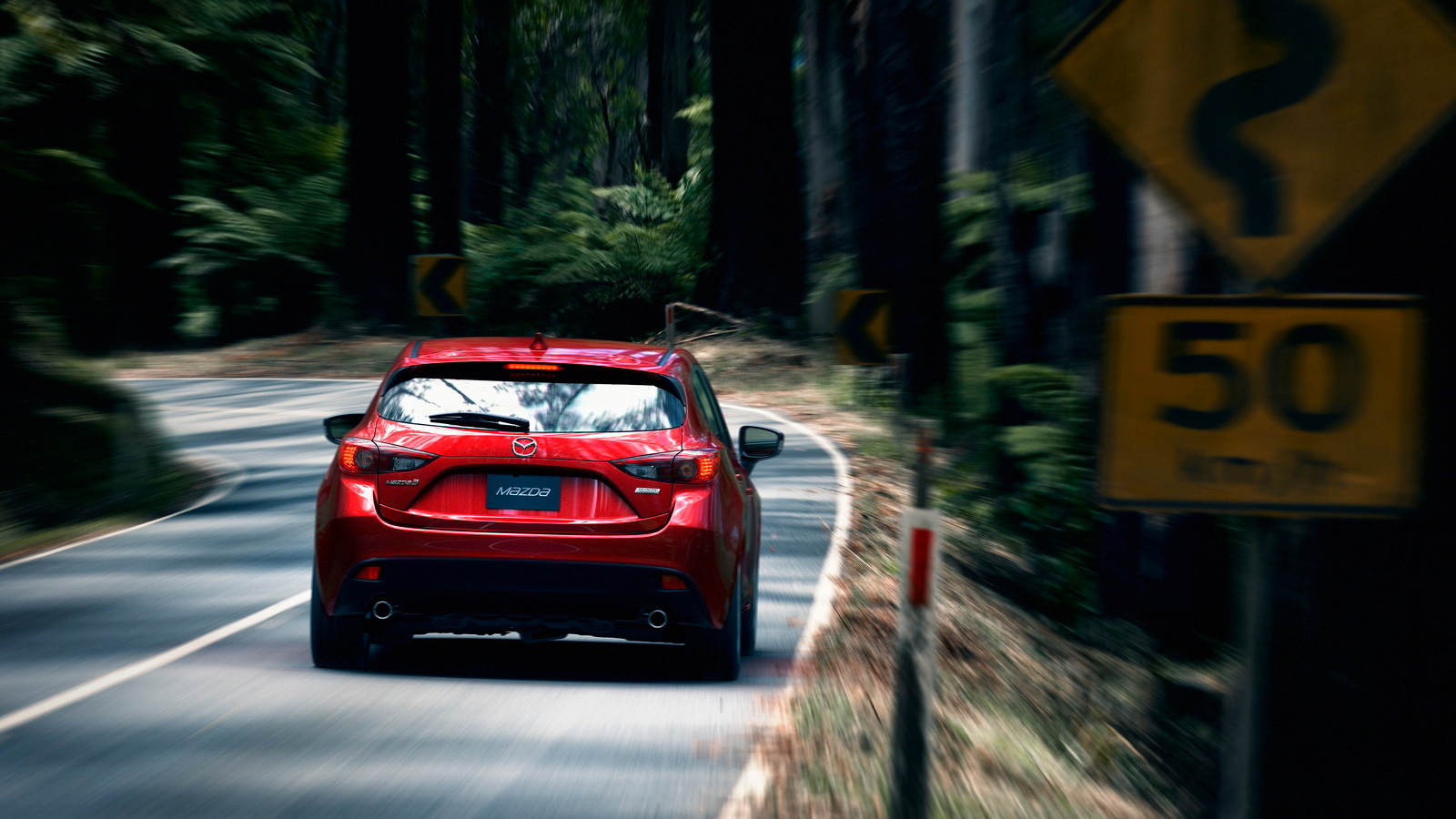 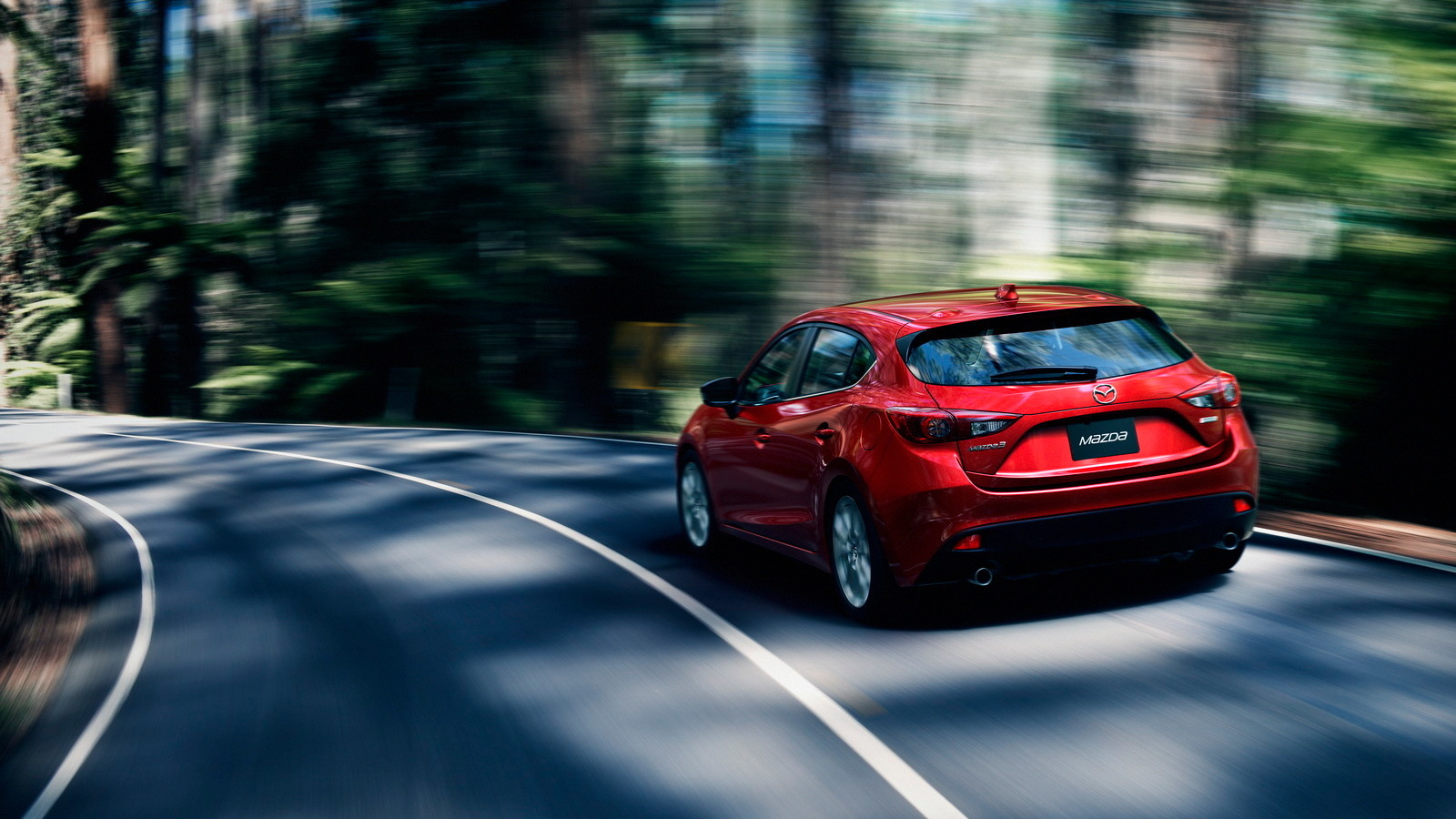 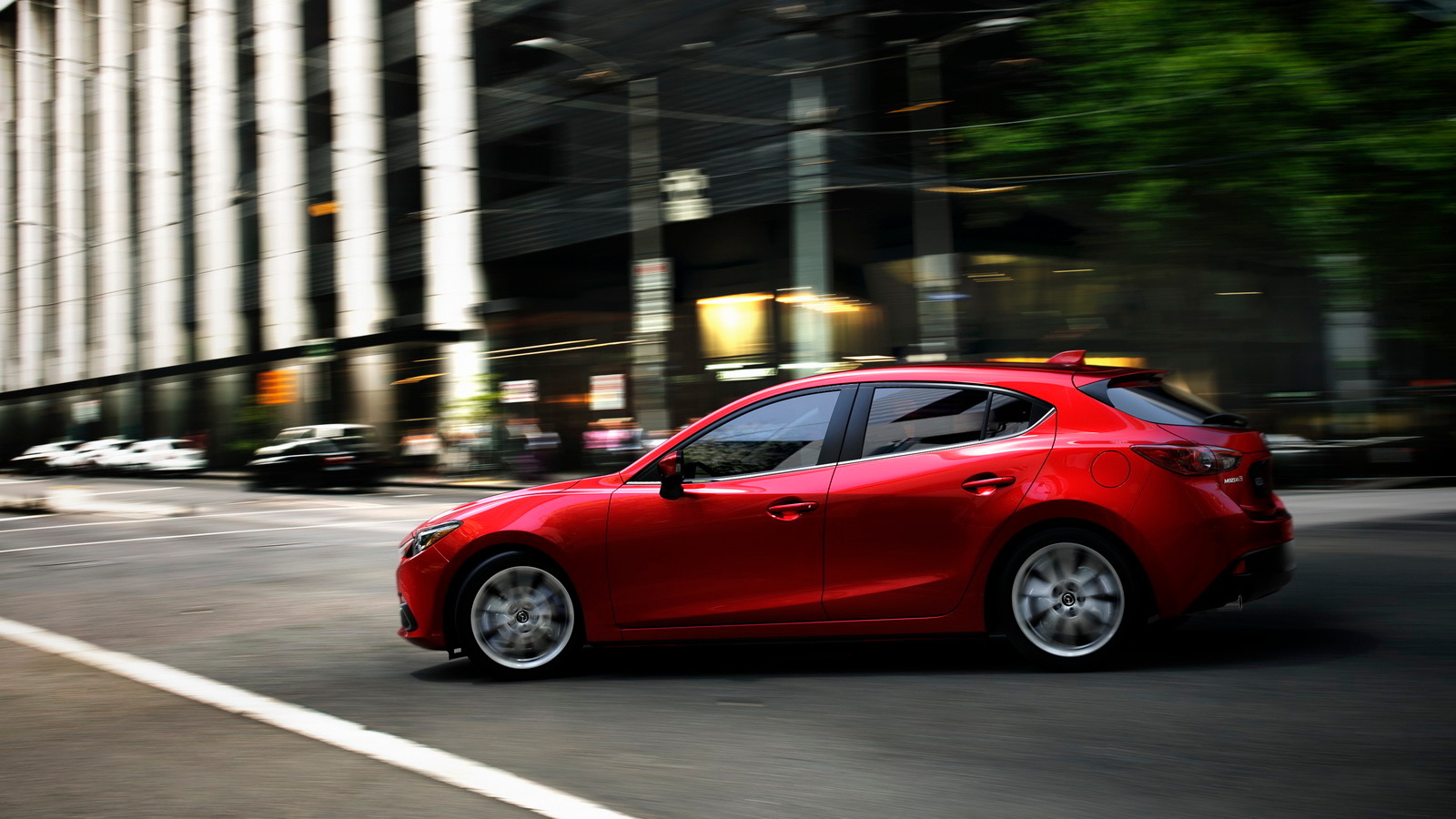 We've been keeping close tabs on the new 2014 Mazda 3 for months, including spy shots galore, and now it's finally here.

The third-generation compact hatchback and sedan from Mazda, which together are the brand's best-selling vehicle, are entirely new for 2014. There's the latest Mazda design language, lots of updated technology, and two revised powertrains.

The first thing you'll notice about the latest Mazda 3 is right up front. It's ditched the "smile" front end for an edgier, more upright five-point grille. The brand's Kodo design language works well on its compact car. With the grille corners leading into swept-back headlights, the front end is blunt, but aerodynamic. Mazda said the five-door achieves a drag coefficient of just 0.28, while the sedan achieves a 0.26.

Inside the Mazda 3 features a driver-focused cabin, with all the controls arranged symmetrically around the driver's centerline. One of the highlights of the interior is what Mazda calls the Active Driving Display. It's a clear panel that pops up from behind the gauge cluster, and it can display speed, turn-by-turn directions, and other information. It's one of the first applications of a head-up display-like feature in the mainstream compact-car class.

The Mazda 3 has been one of the best-handling compacts on the market, and we don't expect that to change. The suspension has been retuned with modifications to its springs, shocks, and anti-roll bars. The changes should improve straight-line stability and increase cornering capability without sacrificing ride comfort. The power steering system uses electric motors.

The EPA hasn't rated the Mazda 3 yet.

The Mazda 3 has lagged behind the competition when it comes to technology, but that has been remedied for 2014. A combination of radar-based sensors and cameras bring safety features to new levels. A new i-ActivSense safety package includes adaptive cruise control, blind-spot monitoring, lane-departure warning alert, and headlights that can switch from automatically between high and low beams.

The available infotainment options have also been upgraded. A new system connects via Bluetooth to the driver's smartphone, and the system's software can be updated in the future, adding new features without new hardware. A text-to-voice system lets the driver read e-mail and SMS messages without taking their hands off the steering wheel. Drivers can even have the system read updates from Twitter and Facebook.

While users will have the ability to search the Internet for mapping and directions to a specific location, a conventional navigation system is available with mapping and routing information stored on an SD card.

Pricing will be announced closer to the on-sale date later this fall. For more information be sure to read The Car Connection's full preview here.