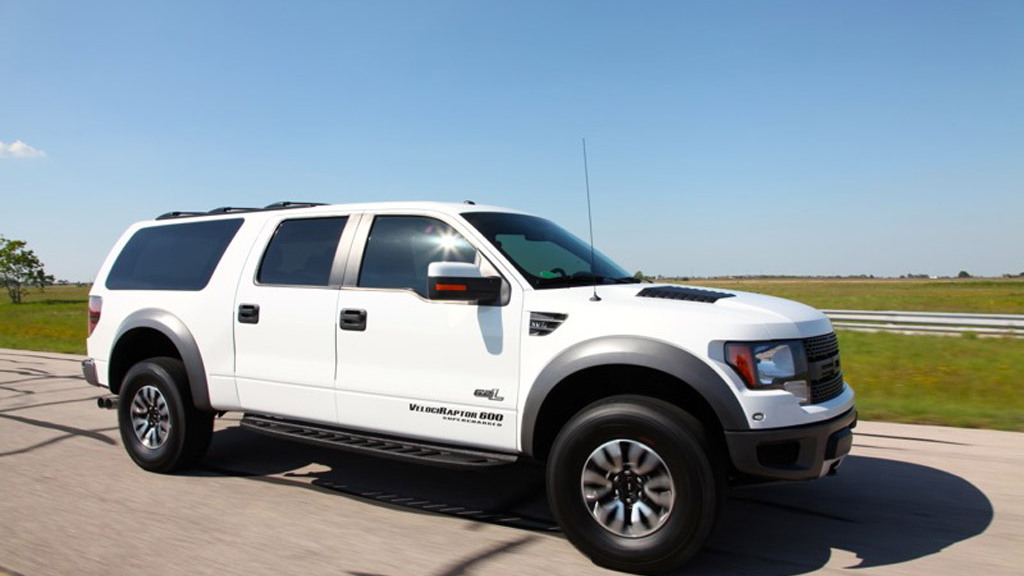 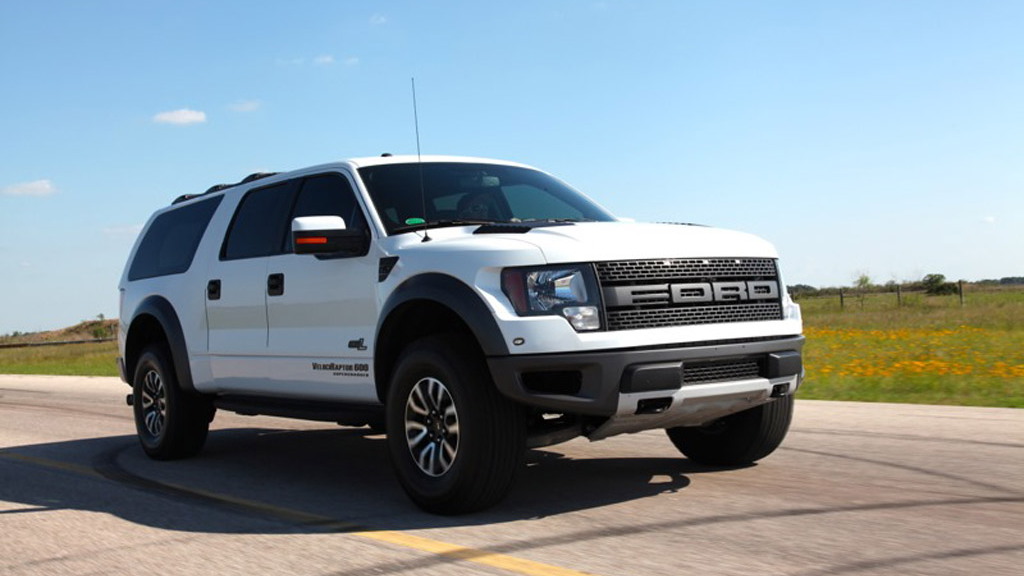 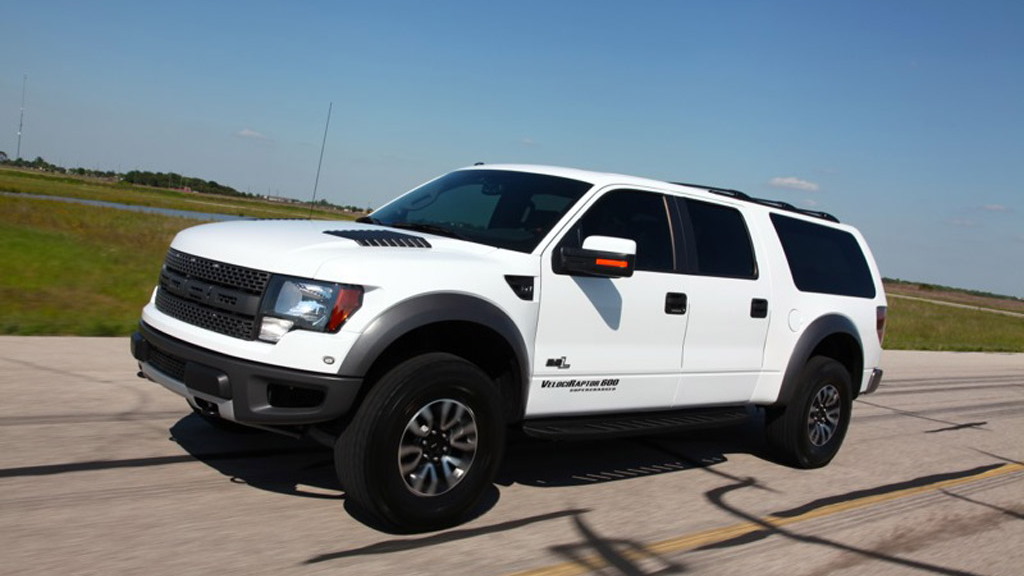 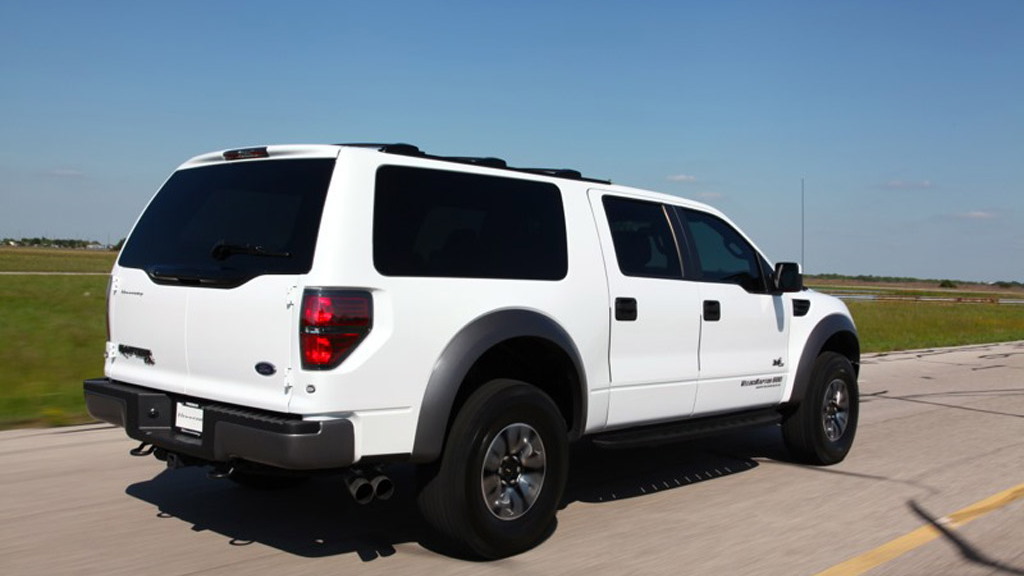 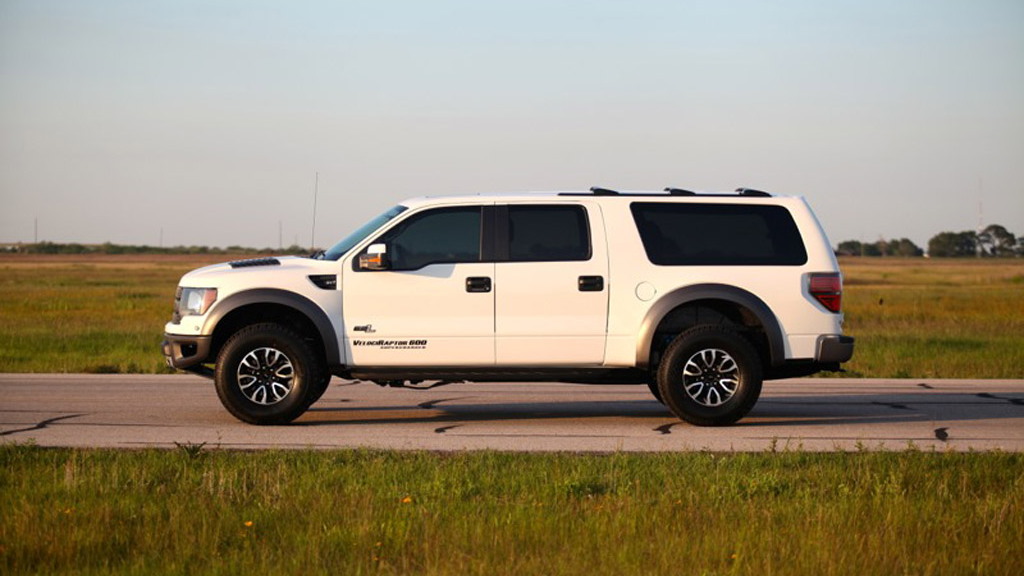 19
photos
The Ford F-150 SVT Raptor is one of the most capable vehicles off the road, and with a bevy of upgrades offered by the tuning masters Hennessey, the awesome pickup can also be quite capable when it comes to the track.

Where the standard F-150 SVT Raptor, and even Hennessey’s custom VelociRaptor, fall short, however, is carrying capacity. But now Hennessey has taken care of that problem, too.

What you’re looking at here is Hennessey’s new SUV conversion for the F-150 SVT Raptor.

Starting with the F-150 SVT Raptor’s four-door SuperCrew model, Hennessey engineers remove the pickup tray and weld on an SUV rear complete with an additional row of seats. This lifts seating capacity from five to eight.

As Jalopnik points out, the end result is something akin to the old Ford Excursion because there’s a split tailgate design. However, with Hennessey’s other modifications and the capable platform of the F-150 SVT Raptor, we doubt there will be any Excursions coming close to the performance of this beast.

Yes, Hennessey has also applied its VelociRaptor upgrade to the package. This means a custom supercharger is applied to the standard 6.2-liter V-8 engine, bringing output to a heady 600 horsepower. The gain over the stock 411-horsepower rating is obvious, says Hennessey. While the regular F-150 SVT Raptor will accelerate to 60 mph in around 7.5 seconds, Hennessey’s VelociRaptor SUV will do it in just 5.9 seconds.

Note, there are some shortcomings to take heed of. The conversion adds around 600 pounds to the weight of the F-150 SVT Raptor SuperCrew and since it hasn’t been validated for off-road use Hennessey warns to use it for the road and soft-road trails only.

“Don’t plan on pre-running Baja or negotiating Rubicon with our SUV--that is not why we built it”, Hennessey founder John Hennessey said in a statement. “But, if you’re looking for the ultimate vehicle to drive from Aspen to Telluride in January, the VelociRaptor SUV would be perfect.”

Pricing for the VelociRaptor SUV starts at $149,500 and Hennessey is planning to build just 30 examples per year. A number of performance mods can be installed at additional cost, including Brembo brakes, larger wheels and tires, and LED packages. Hennessey will even build you an armored version should you desire one.