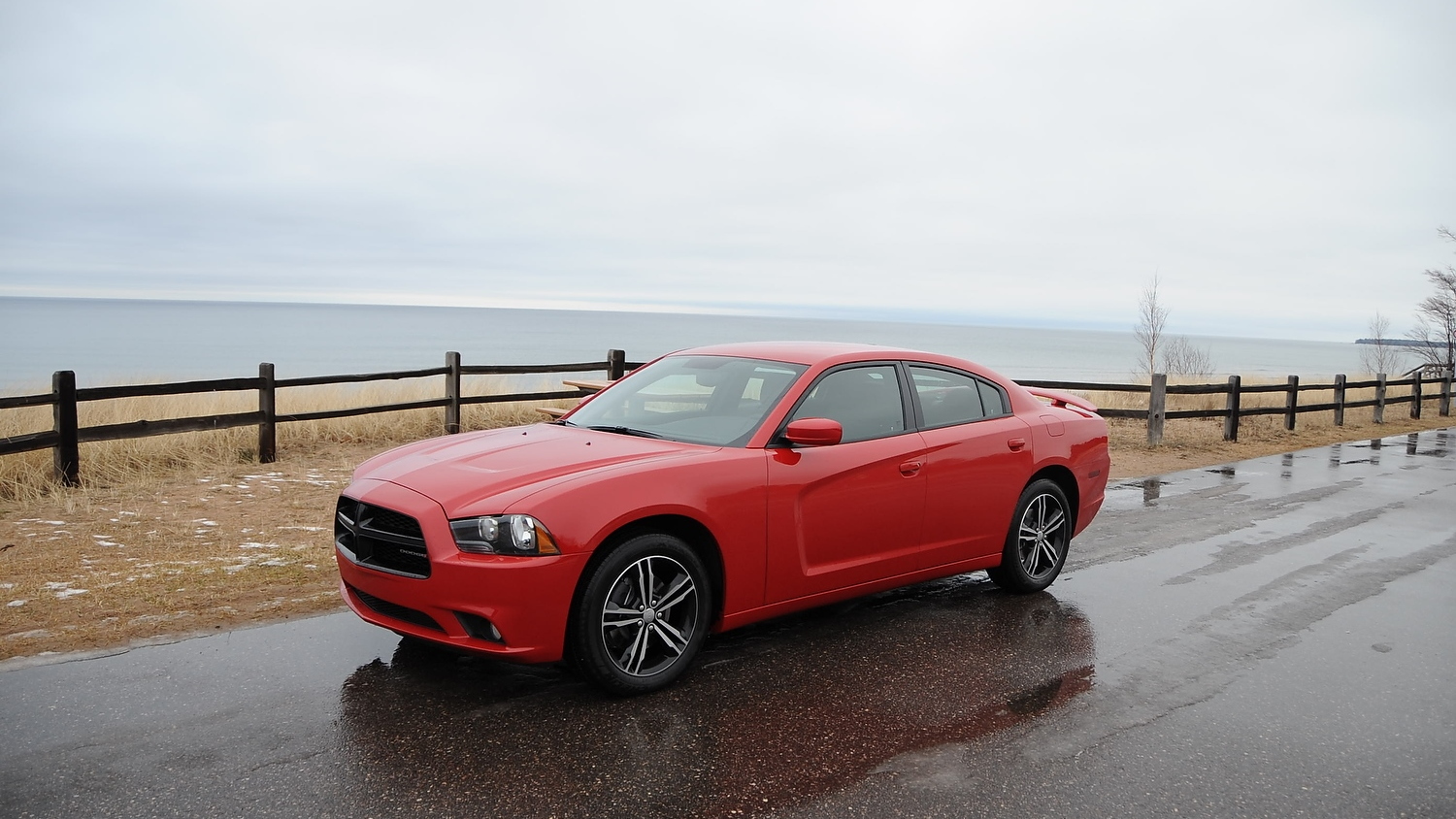 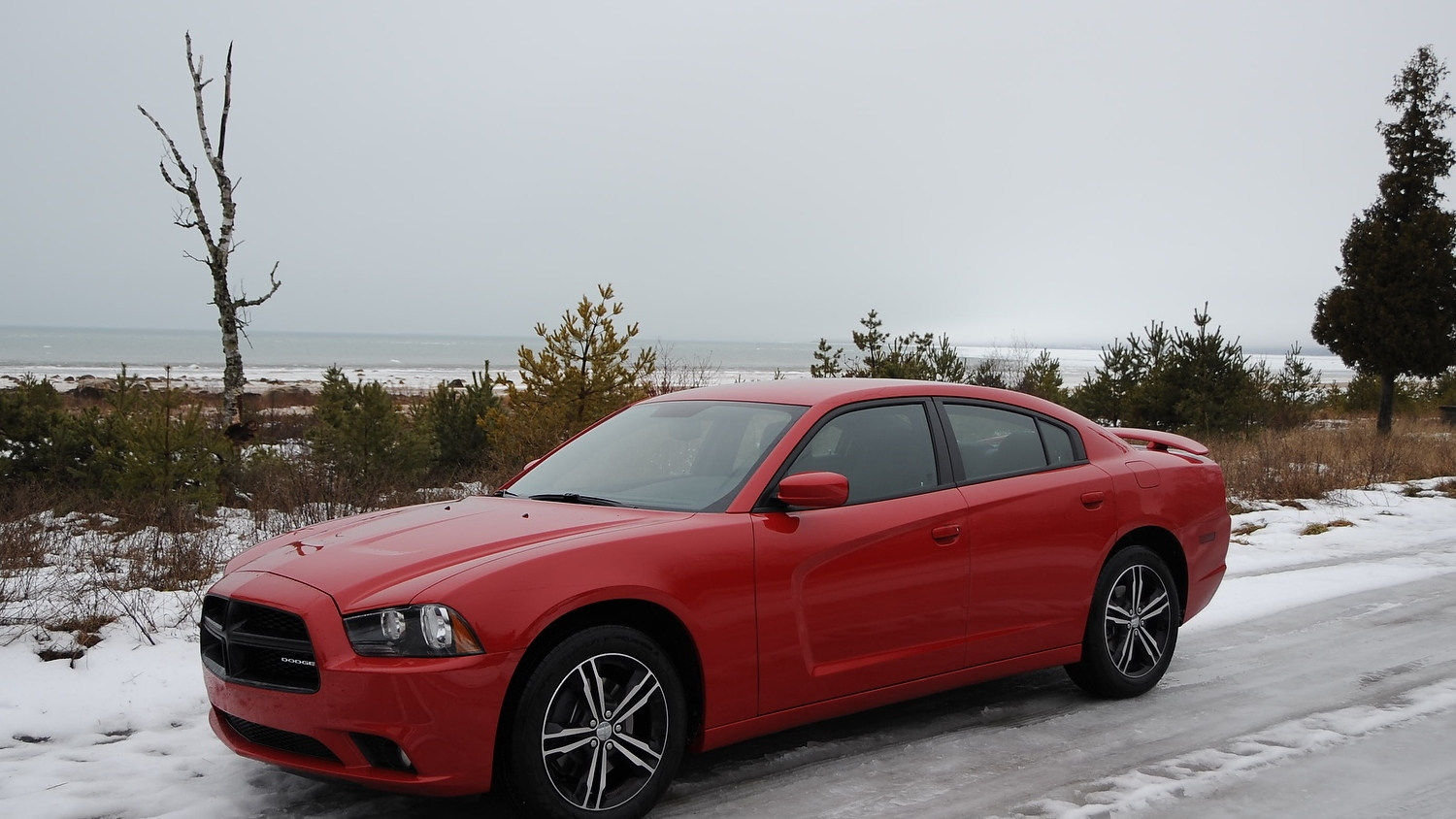 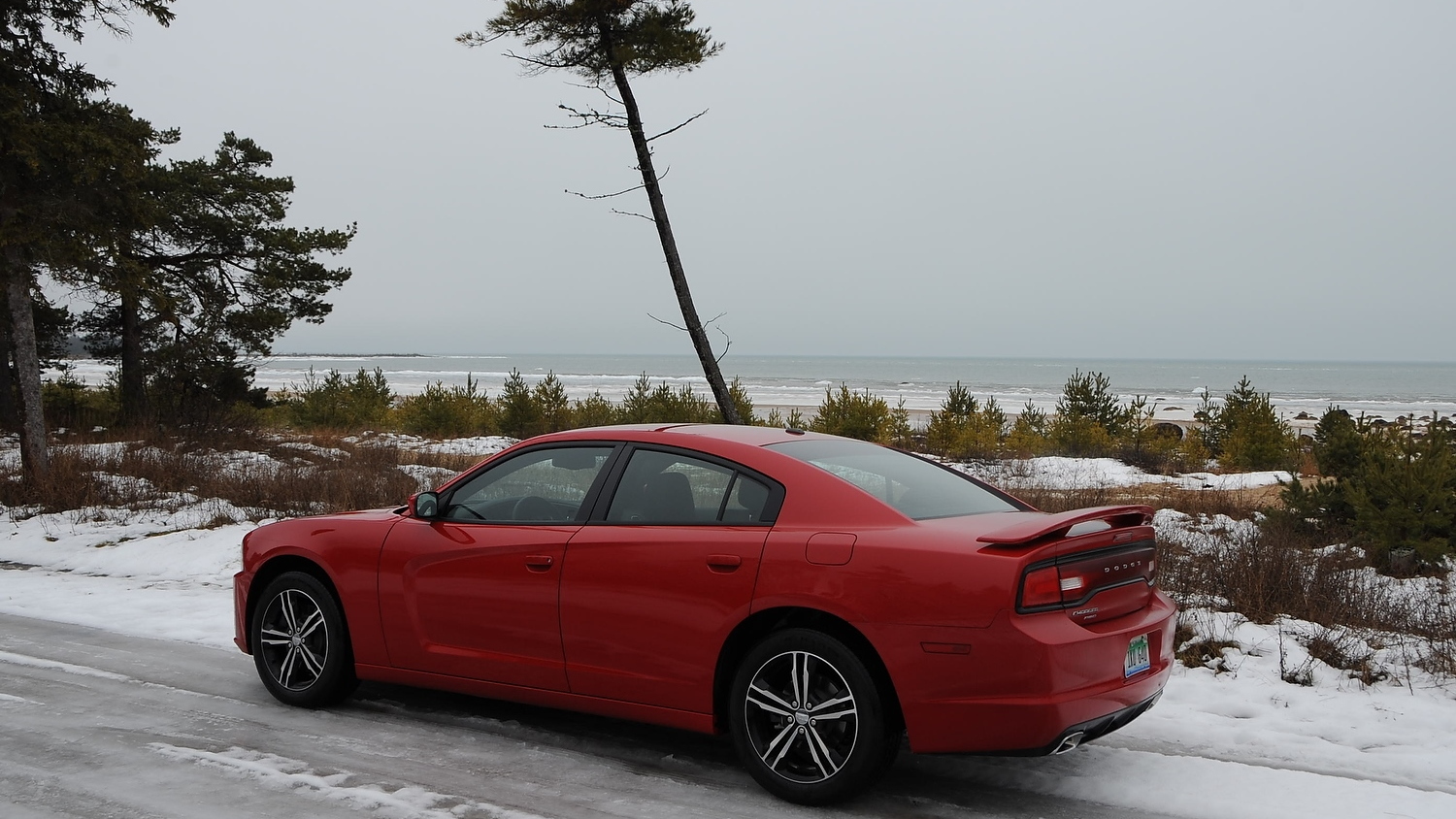 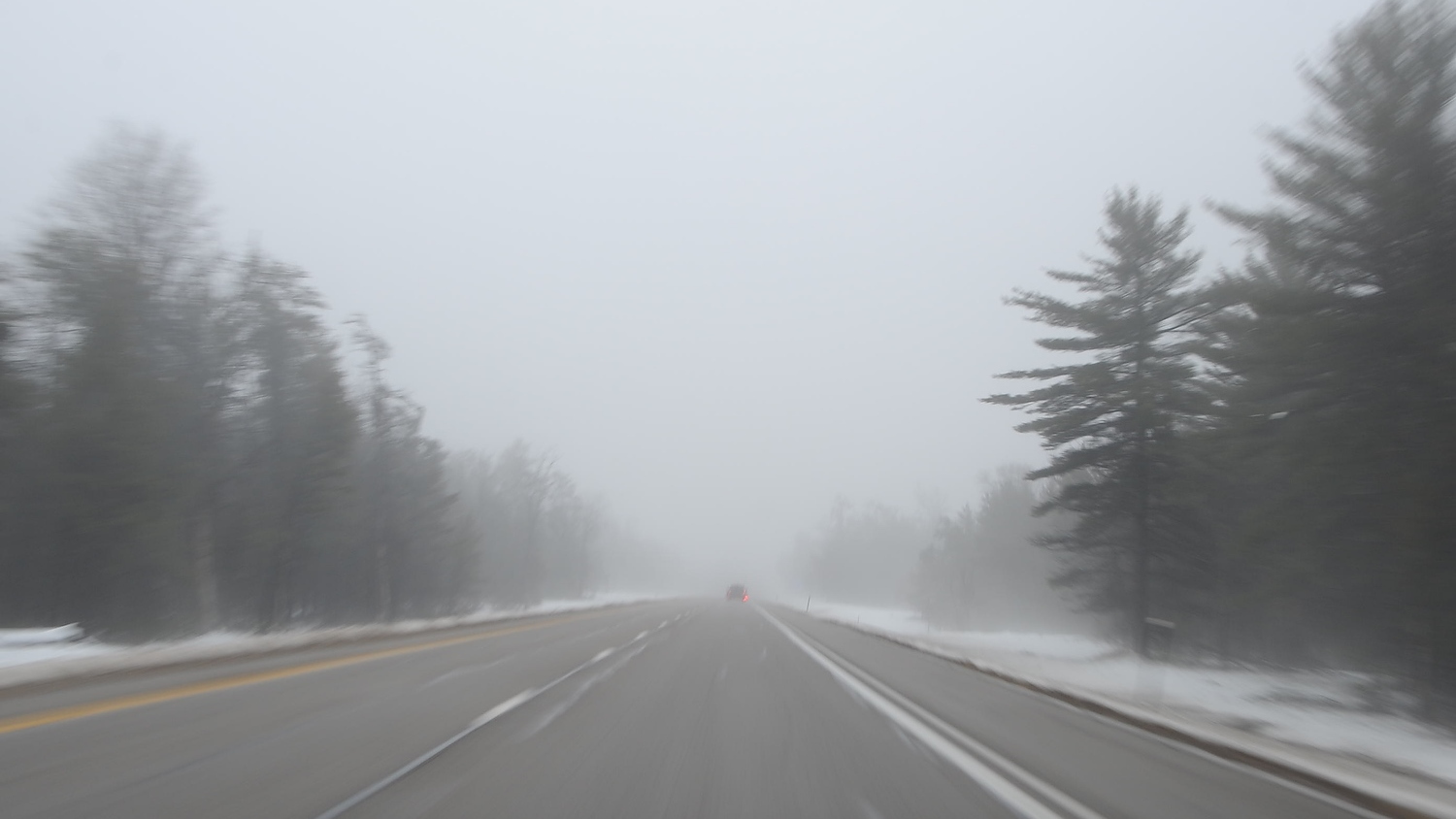 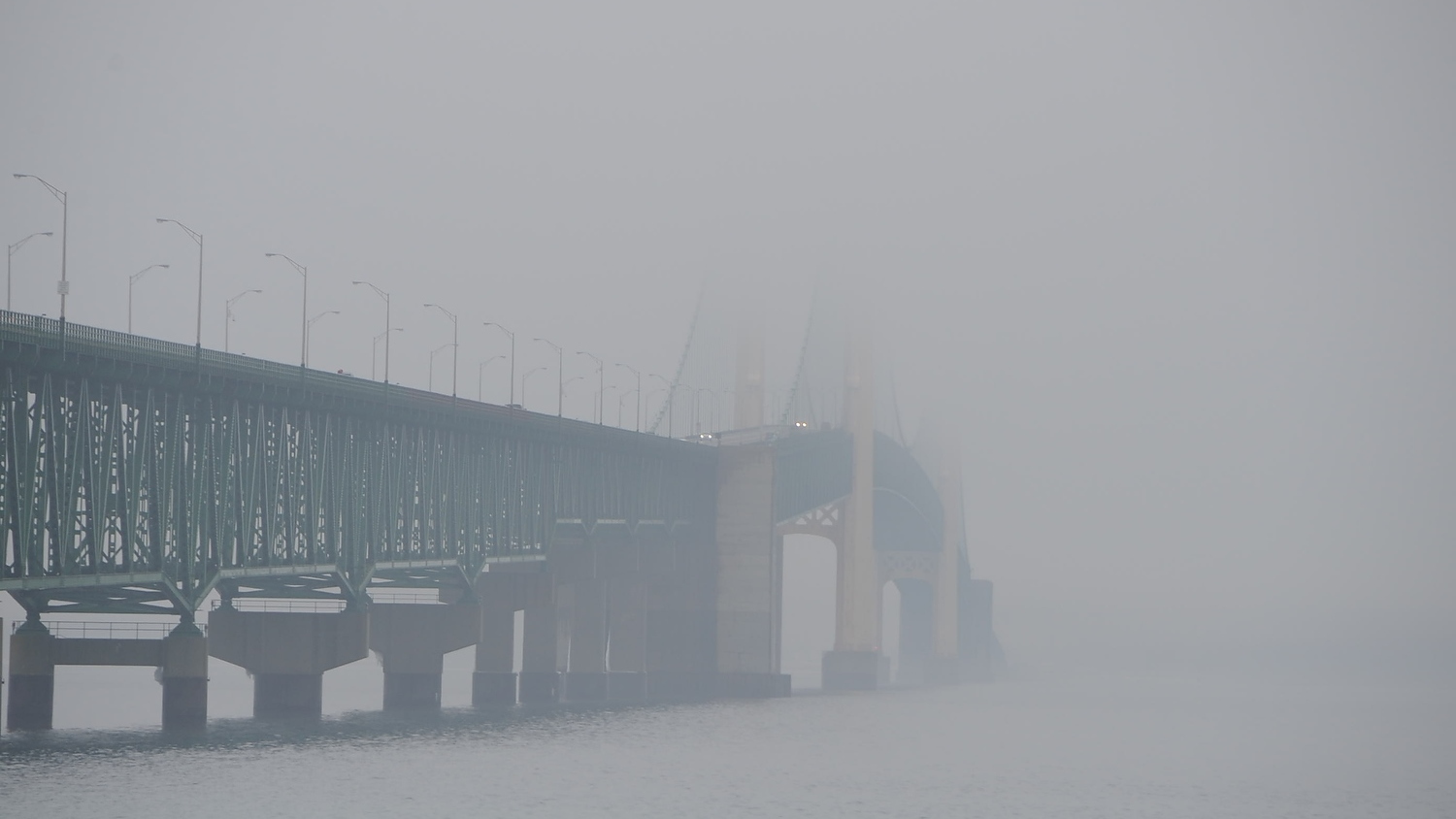 A few days before the Detroit Auto Show, we got invited to beat up on some new Chrysler 300 AWD and Dodge Charger AWD Sport vehicles at Chrysler/Dodge's winter proving grounds far north in the picturesque Upper Peninsula of Michigan. We were to spend the day "drifting" these new cars on their carefully crafted ice track. Many cones had been setup, and many cones were going to be knocked down.

Well folks, global warming is real. At least it's real enough to cancel the latter groups of the winter driving event. After a few days, there wasn't enough snow at the winter testing facility to continue the program, and the last group, of which we were a part, got scrubbed. Not all was lost, as we had the opportunity to embark on a cross-Michigan "winter" drive instead of getting sideways on an ice track.

Typically a cross-Michigan winter drive would be treacherous and greatly favor an AWD vehicle like the new 2013 Dodge Charger AWD Sport I had at my disposal, but unfortunately (or fortunately) the roads were clear, dry, and snow-free. I even had to wear sunglasses for a bit due to the blinding sunlight in the sky. Very odd for January in Michigan. The lakes in Michigan were still abnormally large and cold, however.

The car I got was equipped with a powerful V-6 and the 8-speed automatic paddle-shift transmission. On pristine road conditions, the car felt a lot like a rear wheel drive Dodge Charger, and frankly was very pleasant and comfortable. I did, however, find a slushy parking lot to at least give the Scandinavian flick a go. I also found an ice-packed back road near the Mackinaw bridge to see how the car handled in very-low grip conditions, or "low mu" as the engineers like to call it. When traction-challenged, you can clearly tell that it's an AWD vehicle, yet it still behaves a bit like you'd hope --with more tail wag than a traditional AWD vehicle normally allows.

According to Michael Kirk, the Director of Powertrain Axle, Driveline, and Manual Transmission Engineering, AKA "the guy that would know," this characteristic was engineered into the system intentionally so the Charger would maintain its sporty muscle car feel even with AWD. I think they did a great job on that point. The front wheels get dialed into the dynamics in a subtle way that provides the grip very quickly, but not in a way that spoils all the fun. Of course, I'm sure I would have spent a lot more time playing on this edge had we spent the day on the ice track. *sigh* Hopefully this opportunity will present itself in the future, and I can save the writing to just post in-car video from that day.

Overall, I really enjoyed the car as a road-tripper. It is supposed to fit four comfortably, though I was alone and thus had to stay in the front seat the whole trip. I tried the back seats, but my legs weren't long enough to reach the pedals. The Beats Audio system was simply amazing. When I got closer to Detroit, I got the nod from a gentleman in a nearby vehicle that was appreciating the baseline from my song selection. At other times, I had the impressive stereo off to hear the lack of noise in the vehicle. Good job there too.

The car was very smooth and responsive, and the few times I *really* punched the pedal to, um... make some other vehicles get small, the raw power was exhilarating. I have driven the V-8 SRT engine, which is frankly insane, but I was surprised by how powerful the V-6 has become. I got roughly 25.2 miles per gallon over the 460 miles, much of which was cruise control (set to an unspecified speed to protect the innocent). When I needed power, it was there in spades. I might even be convinced that the new V-6 is a better engine for the modern American muscle car.

The only complaint I had in this department: a few times, the first shift after the kick-down shift felt a bit too jerky. My suspicion (no hard evidence) is that they wanted to retain the second gear-shift *chirp* that a muscle car is just supposed to do off the line. As implemented, you feel and hear a pretty abrasive gear bang sometimes. The paddle shifters are very fun and work very well.

Since we're talking about shifting... I do have one major complaint about the car, and feel it deserves a clear explanation. In my opinion, the new automatic gear selector mechanism (PRND rocker stick) is terrible. Transmissions these days are totally electronic, and the shift lever on the tunnel of the Charger AWD is just an electronic rocker switch with a few hard-to-detect clicks (detents). It rocks up (forward) and down (backward), one or two faint clicks, always springing back to the same center position. The problem is that it doesn't seem to work in an intuitive manner. In fact, in several cases it was downright dangerous.

Here's what happened to me several times during my week long experience with the new Charger. This gets a little complicated, just like the shifter itself. To move out of Park into Reverse, Neutral, or Drive, you have to press the brake pedal, press a button on the shift mechanism (with your thumb), and rock the shift selector down. If you rock it down one click, it goes into Reverse. If you rock it further down, it goes into Neutral. A little further still will get you to Drive.

You could also (starting from Park) rock it down one click to select Reverse, release it, then rock it down again one click to get Neutral, then release and rock a down one click again (while pressing the button and the brake pedal) to get Drive. The clicks are barely noticeable, so you have to pay close attention to get it right. Sometimes I got Reverse, sometimes Neutral, and sometimes Drive--no matter which I was after. If I was really concentrating, I could get the exact gear I wanted--but that's my point. With the usual Chrysler shift lever, I don't have to think to do this because each mode selection (Park, Reverse, Neutral, and Drive) has its own physical location along the throw of the lever.

To make matters worse, and frankly quite dangerous, you can shift out of Drive or Reverse into Neutral by just bumping the lever up or down depending on which gear you were in (Drive > up > Neutral or Reverse > down > Neutral). That doesn't seem so bad, but you can't get it back into Drive or Reverse unless you press the brake pedal, push the button on the shift mechanism, and then rock it into the desired gear.

This means you could be rolling down the freeway at 65mph, bump the shift lever into Neutral by accident, then have to apply brakes, press a button, and rock the shift lever the right way to get back into gear. This sounds simple, but when you're in traffic with cars bearing down, it doesn't go smoothly. This is further exacerbated by the fact that you can rock the shift lever down while in Drive (without pressing the button or brake pedal) to alternate between Sport and Drive mode. Instinct might be to press up to get out of Sport, but that would of course pop the car into Neutral.

Another example that happened several times during the trip: Select Reverse using the above mentioned game of concentration, then back out of a parking space while watching the very nice backup camera image on the center console display to make sure you don't hit the car behind you. Once you have backed up far enough, attempt to get the car into Drive, press the gas pedal to hear the engine roar as you calmly continue rolling backward toward the car you were being careful not to hit--because your transmission is in Neutral.

Of course, at this point you don't know you're about to hit the car because the back-up camera view has disappeared as you are no longer in Reverse. You step on the brake to stop the car rolling when you realize this, then try your hardest to get it into Drive. Frustrating.

Also, when parking, you have to visually check that you actually selected Park, because there's a good chance you didn't do it right and the car is in Neutral and rolling down a hill while you're reaching for your phone. I consider myself a very good driver [ed. note--Joe is an instructor for several track-day outfits], and I got stuck battling with the shift lever a few times in parking lots. I had a few near misses, but luckily no car-to-car contact.

As we learned at the 2013 Detroit Auto Show, the whole Chrysler/Dodge line will be getting this shift mechanism (at least those with this transmission), and that makes me worried. I believe this will be a major issue at some point this year. Remember that you heard it here first!

On the whole, the 2013 Charger AWD Sport is a very comfortable and capable American muscle car. Have you driven one across Michigan in the winter? I have and I really enjoyed it! I would have loved to face down a treacherous snow drive, but Old Man Winter was on sabbatical that week. The sound system is epic, and as long as I was in Drive, the car was a joy. Getting into Drive was the only tricky bit. Please let us know what you think in the comments below.

This first-person drive report was brought to you by High Gear Media contributor Joe Nuxoll. Dodge provided airfare and lodging to enable him to bring you this story.