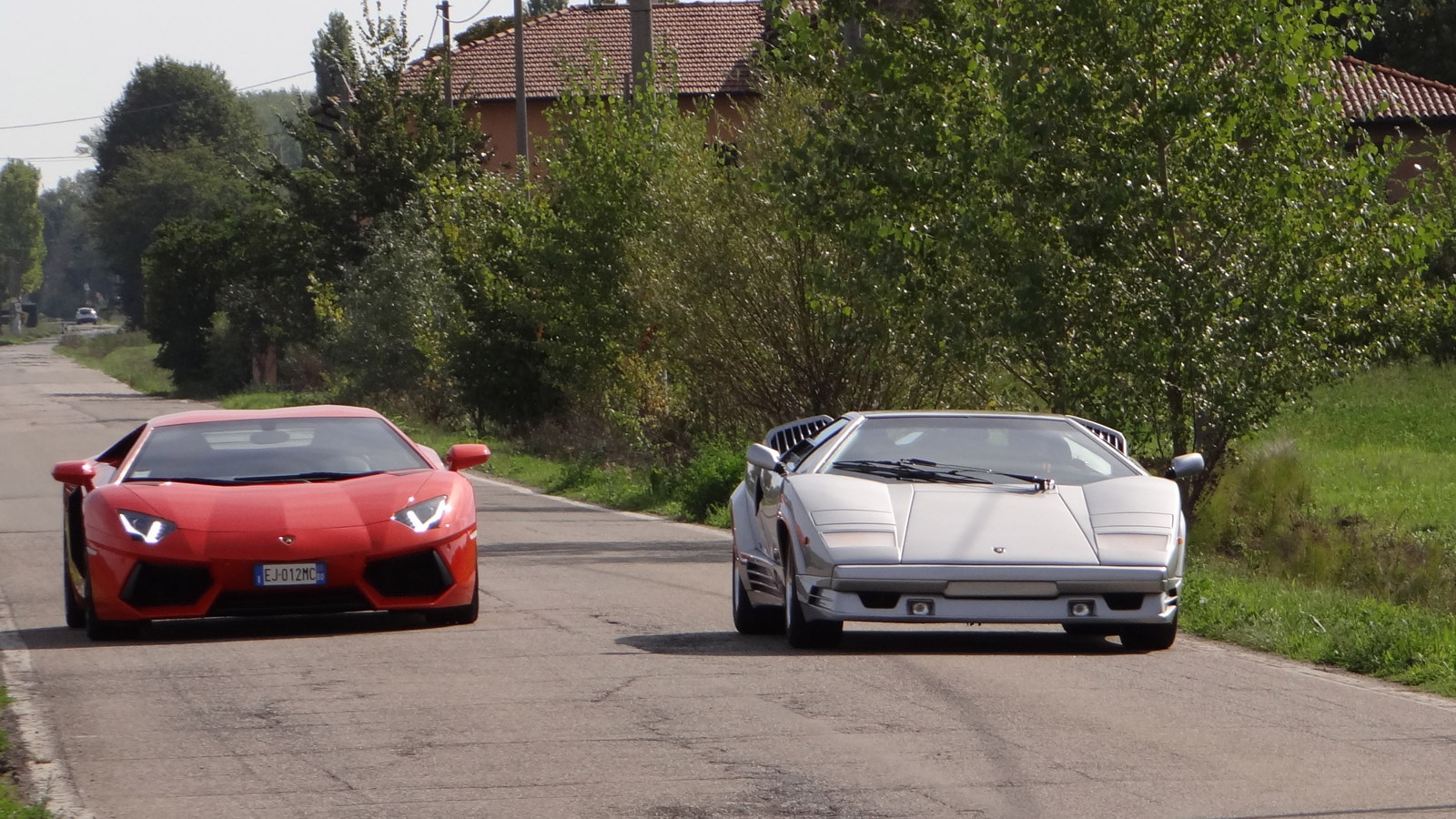 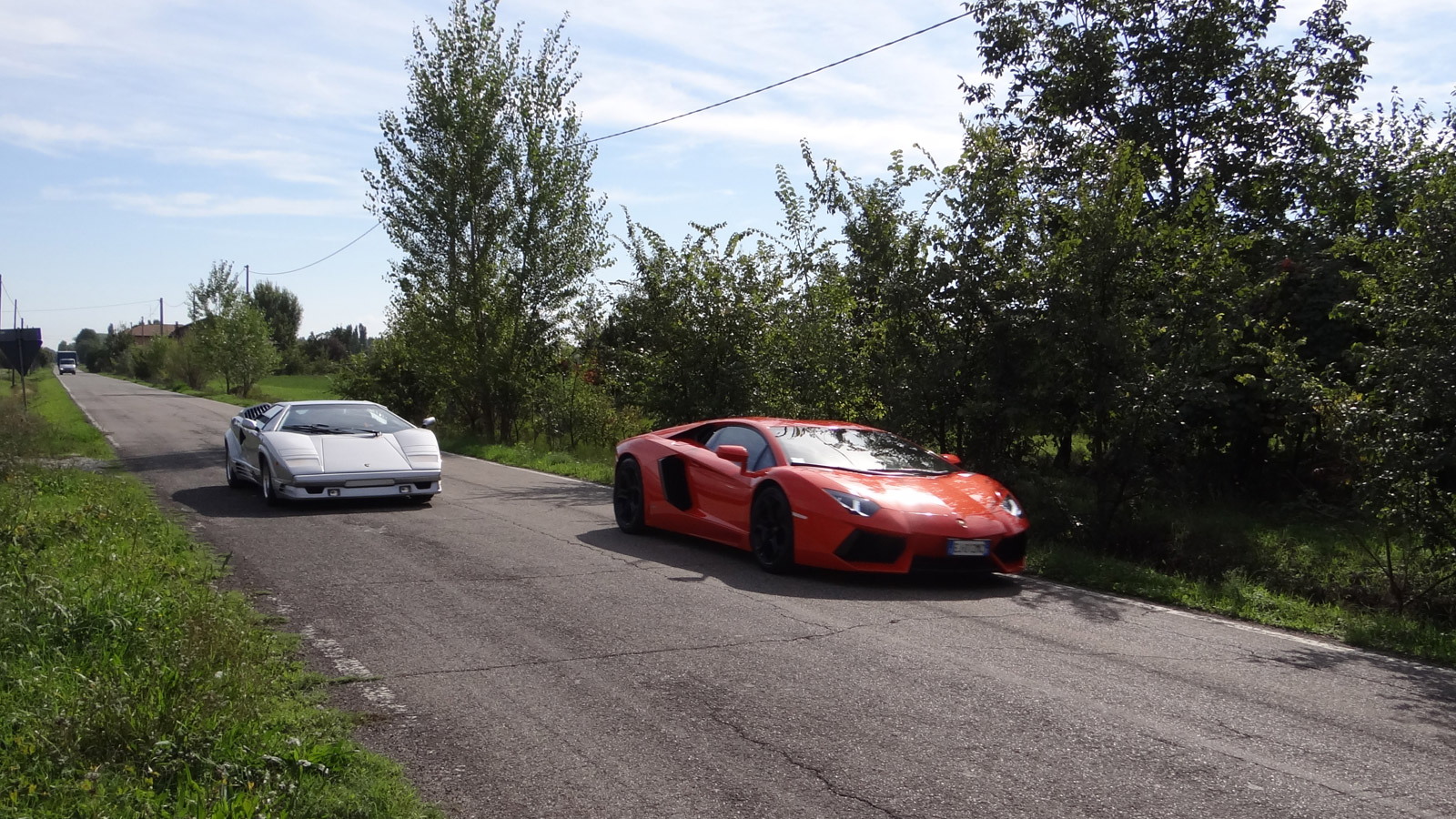 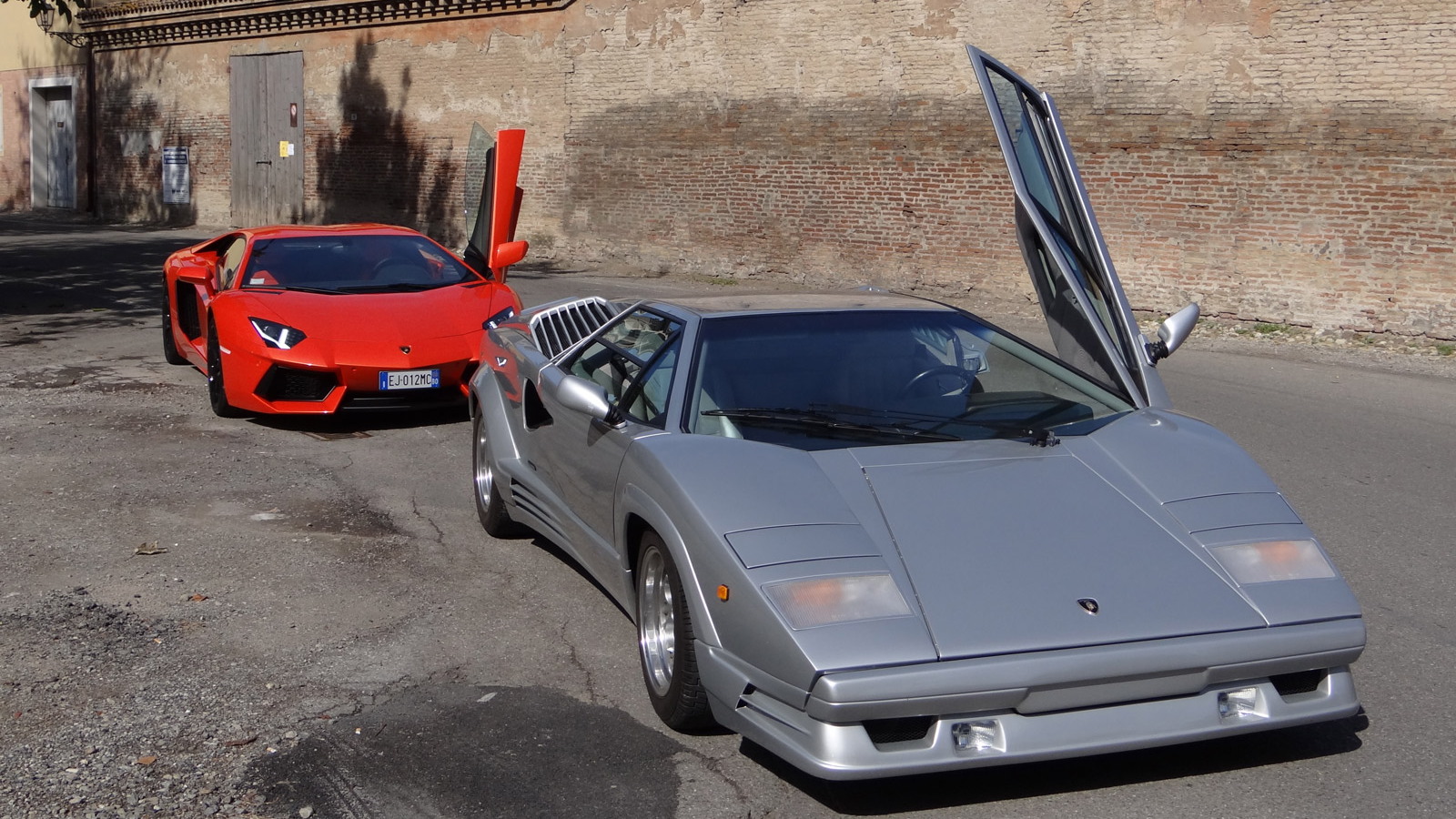 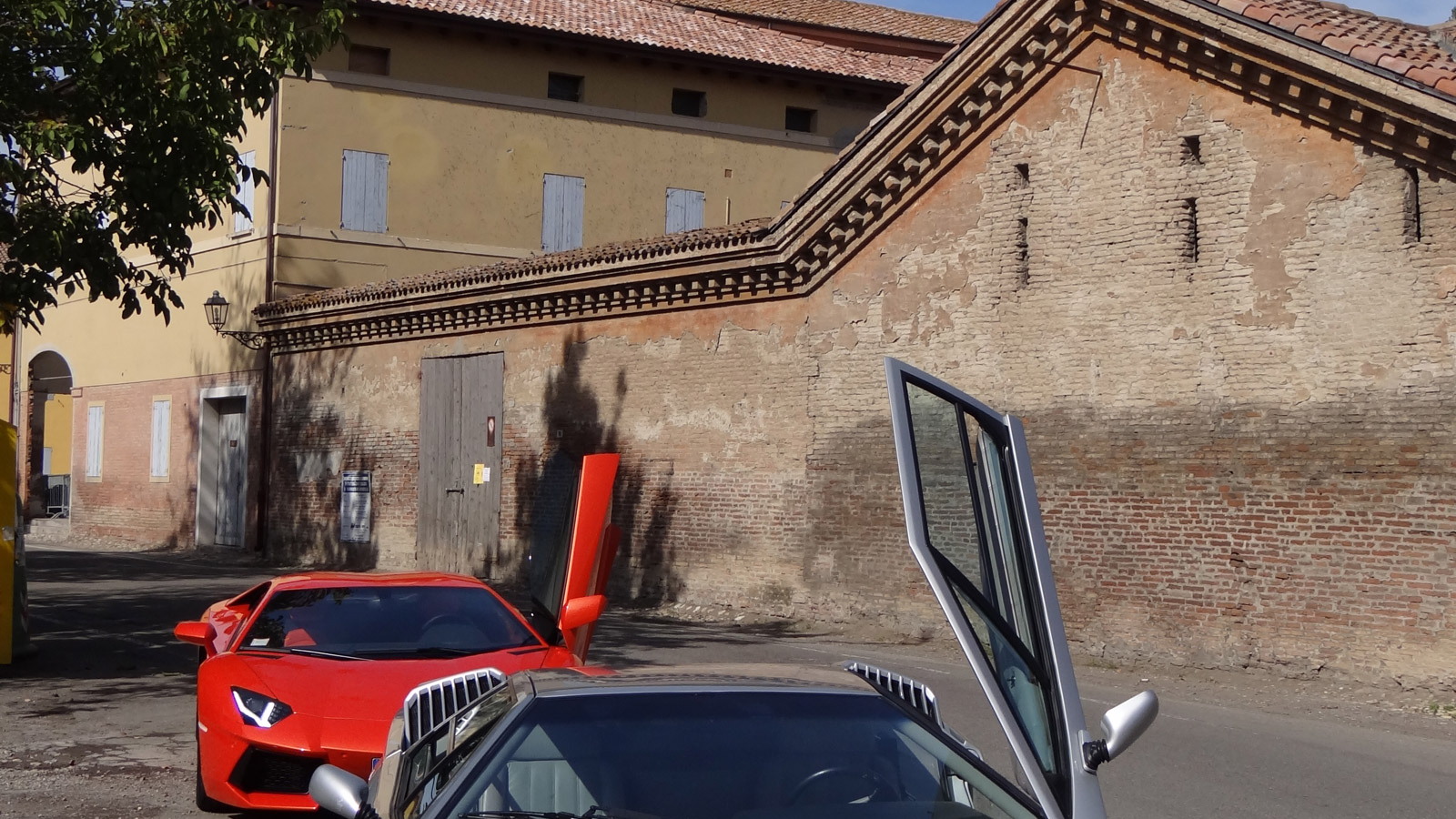 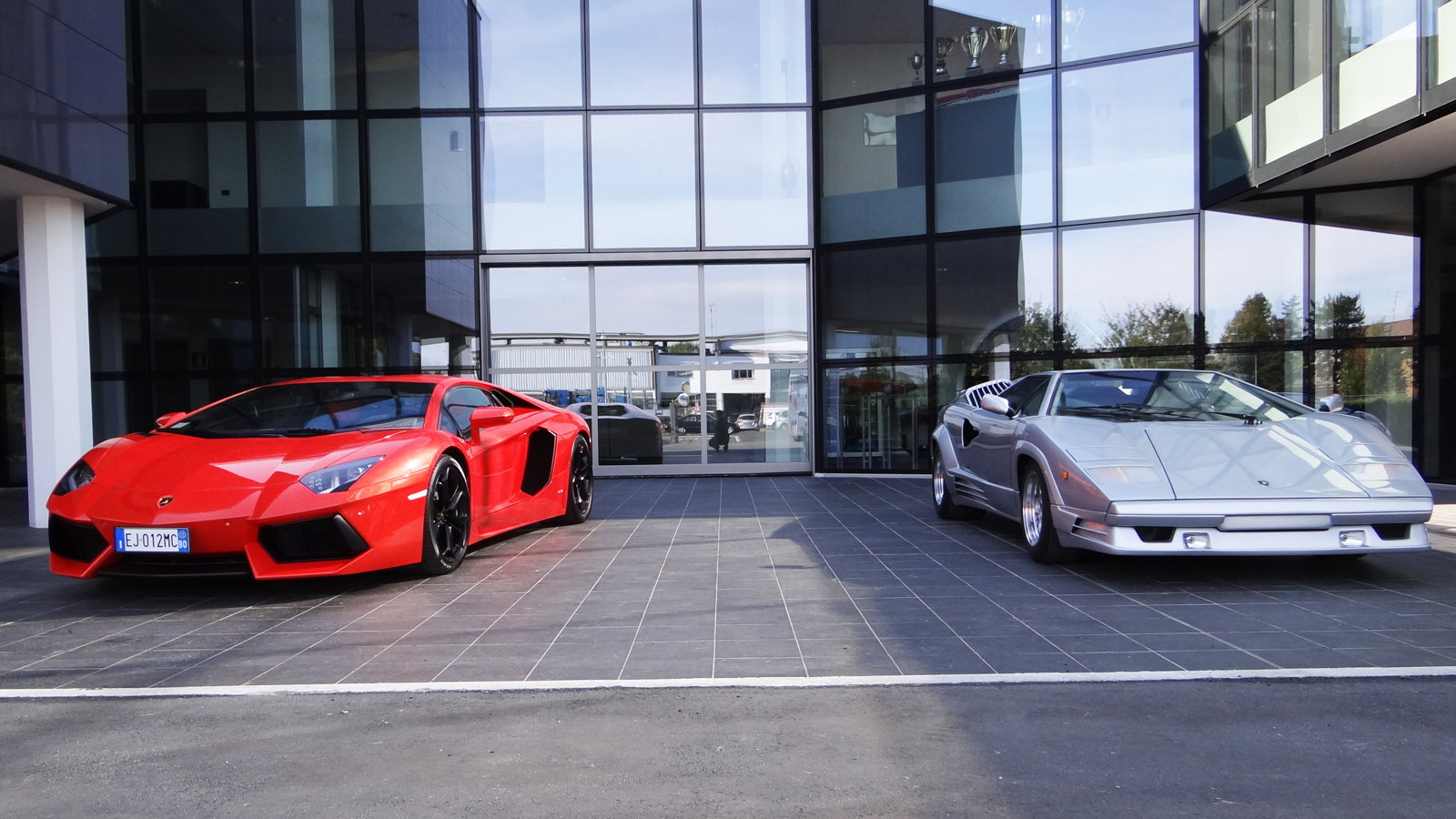 33
photos
The area surrounding Lamborghini’s factory in Sant'Agata Bolognese, Italy, is mostly made up of rustic farmland; the tranquil ambience interrupted only by a passing tractor every now and then. You start to wonder, this is where one some of the world’s most ferocious supercars are born?

Then, as you approach the Lamborghini factory and see the name of company founder Ferruccio Lamborghini on one of the street signs, suddenly it all makes sense. Ferruccio, after all, was born to a grape farmer and made his fortune originally by building tractors, some of them still in use on the nearby farms.

As Lamborghini gets ready to celebrate its 50th anniversary next year, we’ve taken some time out to look at the company’s past and see how the modern Lambos hold up against their ancestors. Helping us in our research are two of Lamborghini’s most important models, a Countach and the latest Aventador.

Sitting the two cars side by side, it’s easy to see how far Lamborghini has come in just the past two decades. At the same time, there’s an undeniable link between the two cars, with the wedge profile and no-nonsense look confirming their bloodline.

This particular Countach, by the way, is the 25th Anniversary Edition, which Lamborghini released in 1988. It’s also the very last Countach ever built--Lamborghini took the car out of its official museum, which made hopping behind the wheel very nerve-racking.

Only 658 Countach 25th Anniversary Edition models were built over the span of a year, each of them powered by a 5.2-liter V-12 delivering 455 horsepower and capable of carrying them to a top speed of 183 mph. The cars featured new front and side spoilers and modified air vents to set them apart from the previous Countach Quattrovalvole (QV), and handling some of those modifications was none other than Horacio Pagani, who worked at Lamborghini before heading off to start his own supercar company.

The Aventador LP 700-4 should be familiar with most Motor Authority readers. If not, click here for our first drive.

Between the launch of the two cars, Lamborghini was bought by Audi. This helped its supercars, which admittedly had a reputation for not being all that reliable, improve dramatically in not only reliability but also refinement. Performance, too, was improved significantly. The new Aventador, for example, will rocket to 60 mph in 2.9 seconds and keep going all the way until it reaches 217 mph.

By modern standards, the Countach feels like a race car. It’s loud, it’s rough and is prone to overheating--before you’re even out of first gear. Moving up and down the gated box makes you feel like your handling a truck at times, but there’s plenty of performance down there once you’re able to stretch the old girl's legs.

By comparison, the Aventador can be quite docile at road legal speeds, although its Independent Shifting Rod gearbox can be a bit unpredictable at lower speeds, sometimes causing the car to jerk violently when you're not expecting. When you drop the hammer, all hell breaks loose and you feel like you’re going to run out of road. That is, until the gearbox shifts up a gear and you’re lunged forward before immediately being thrown back into the seat.

Both cars also sound like nothing else, something you have to experience in this video, filmed by our friends at AutoEmotionenTV and eazy-entertainment. After watching it, we’re sure you’ll agree that even though Lamborghini has evolved considerably over the past 50 years, it hasn’t lost any of the ferociousness the raging bull on its logo personifies.- Daniel Mikacic contributed to this story.