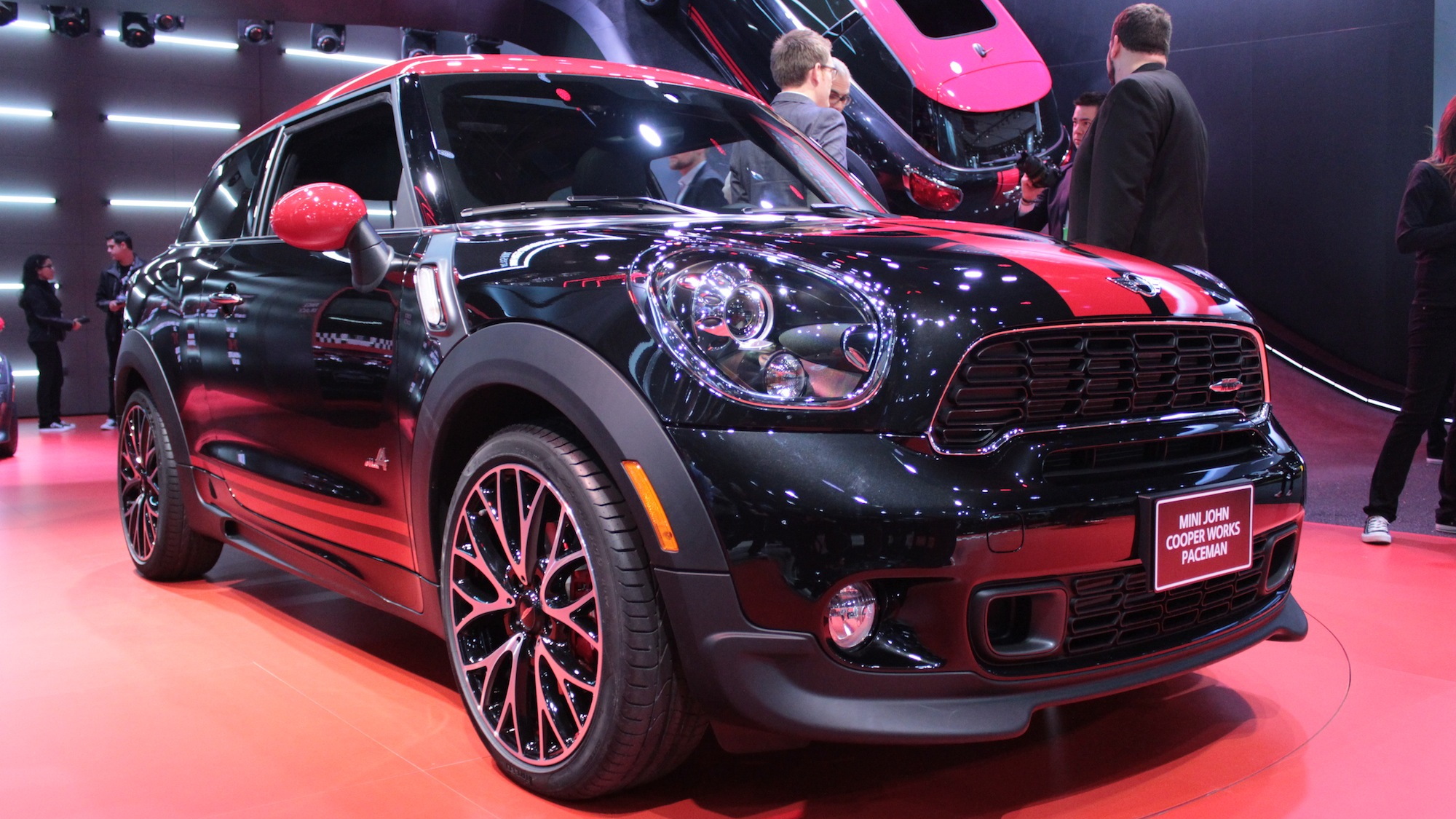 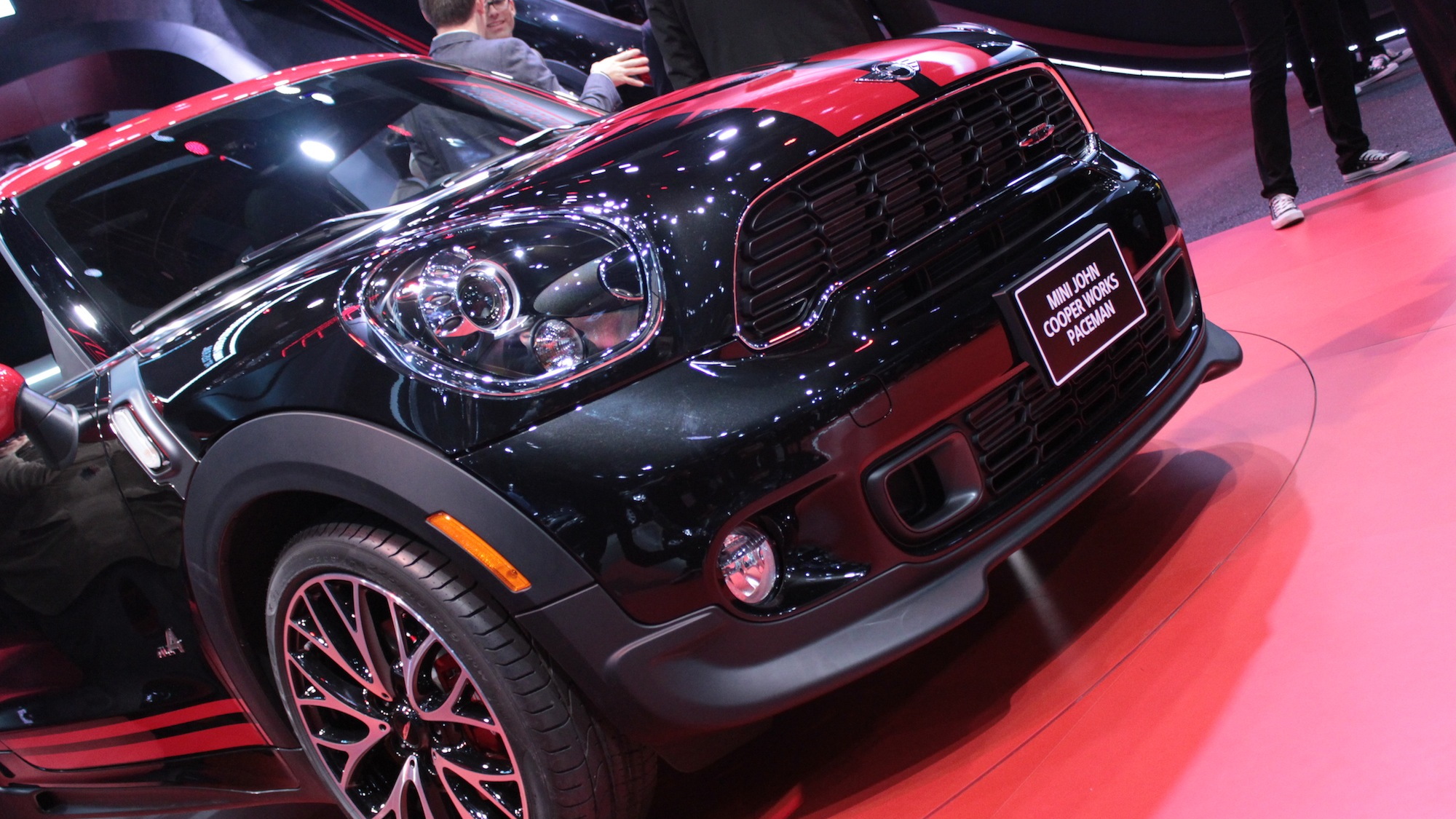 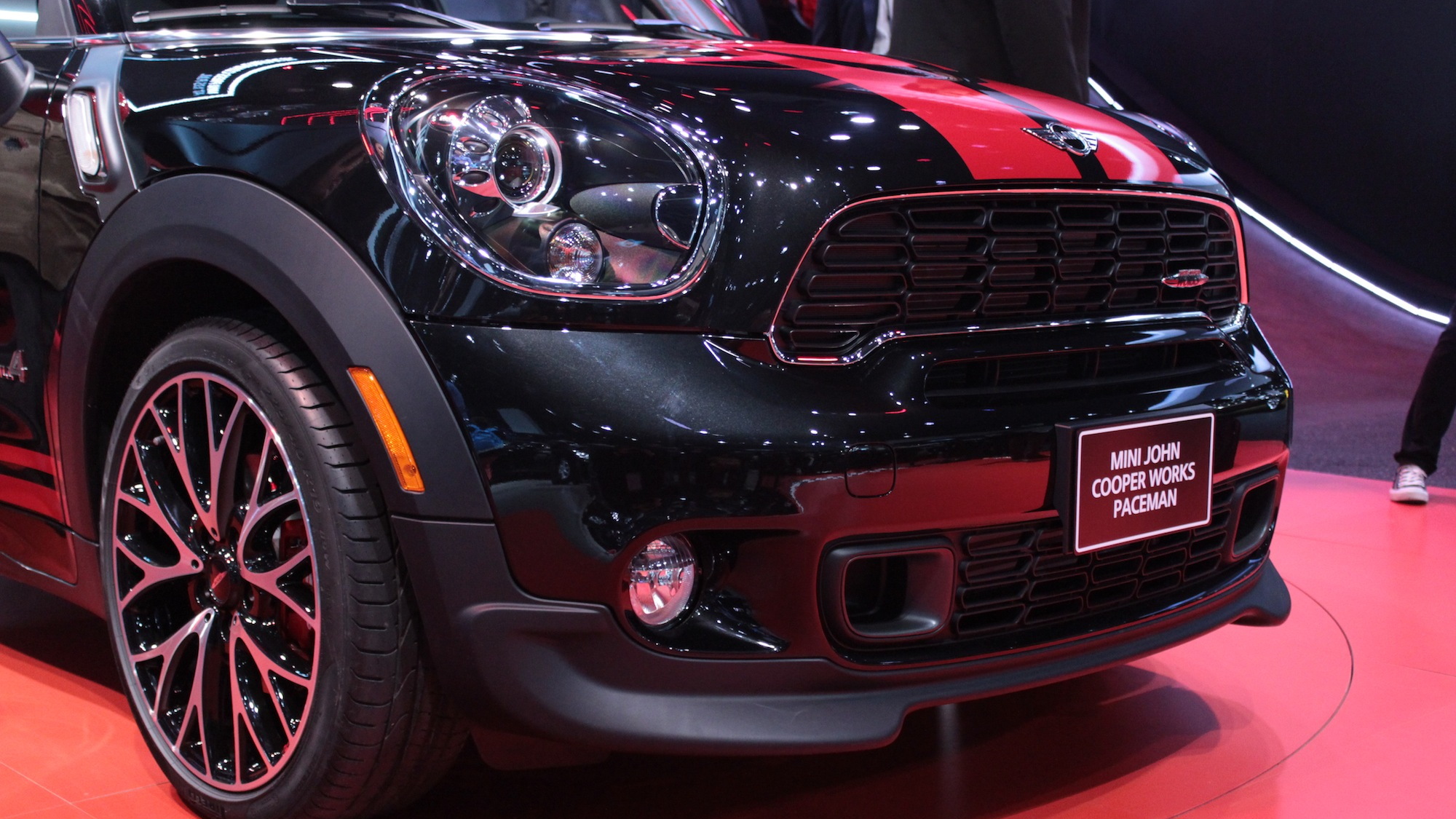 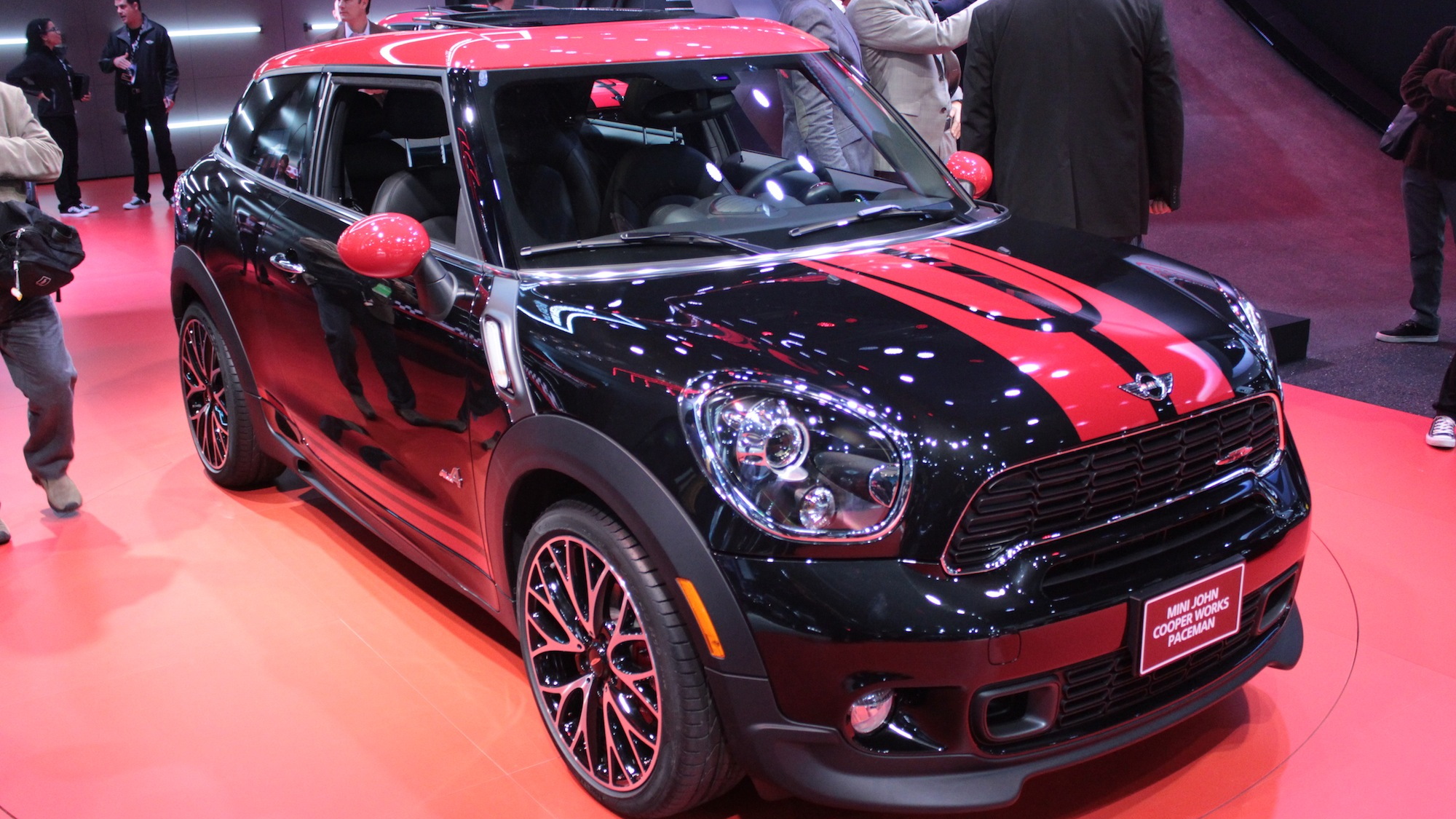 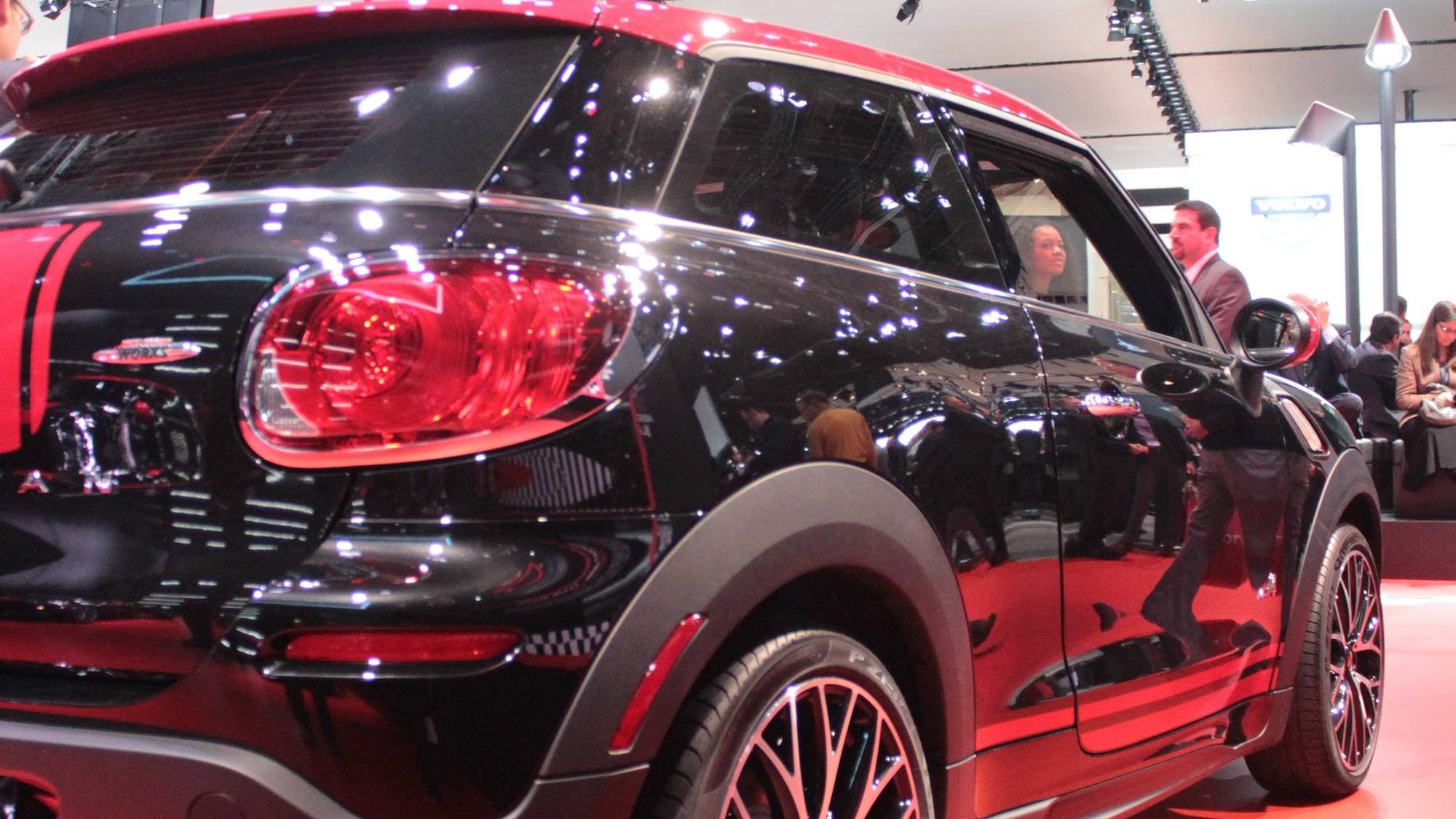 33
photos
The MINI John Cooper Works Paceman is already familiar--if not quite pleasing--to our eyes. But do the official details on MINI's latest car persuade us to want to like it?

Close, but not quite.

You see, this is arguably the most confusing and least attractive cut of MINI's one-sausage-many-lengths theory of design. Pairing the high-riding and soft-roading qualities of the Countryman with the enthusiast-focused John Cooper Works formula could have resulted in a three-door MINI Paceman Baja Edition--a sort of micro--Raptor.

Instead, it leaves us with a John Cooper Works Paceman, good for 6.5 seconds to 60 mph from a 208-horsepower turbocharged 1.6-liter four-cylinder engine driving ALL4 all-wheel drive. Peak torque of 207 pound-feet is available from 1,700 rpm to 4,500 rpm with the Overboost function enabled--pretty stout for a smallish turbo four. A choice of manual or automatic six-speed transmissions is available, and it won't affect the 0-60 mph times.

But as strong as that little engine is, the 6.5-second 0-60 mph time hints at the problems of going tall and off-road-ish: weight. The JCW Paceman is quicker than the JCW Countryman, but not by much.

By way of contrast, the Scion FR-S manages a rather anemic 200 horsepower from its boxer engine, with at most about three-quarters the torque of the MINI JCW Paceman's engine--and even then, it's all at the top of the tach--and yet it can dash to 60 mph in about the same time, with rear-wheel drive only.

The comparison is apples to oranges on everything, and all of it should favor the MINI. But the clock doesn't. That spells a stout curb weight to us. MINI doesn't disabuse us of this notion with the official announcement--curb weight isn't anywhere to be found.

Another indicator that the JCW Paceman may be a bit porky is its EPA gas mileage rating: 25/31 mpg city/highway for the manual or 23/30 for the automatic. Those figures are identical to the four-door Countryman ALL4, and about 4 mpg short on the highway in comparison to a standard MINI John Cooper Works hatchback--likely owing to its taller profile, though it has been lowered 10 mm in comparison to the standard Paceman, courtesy of the JCW suspension. 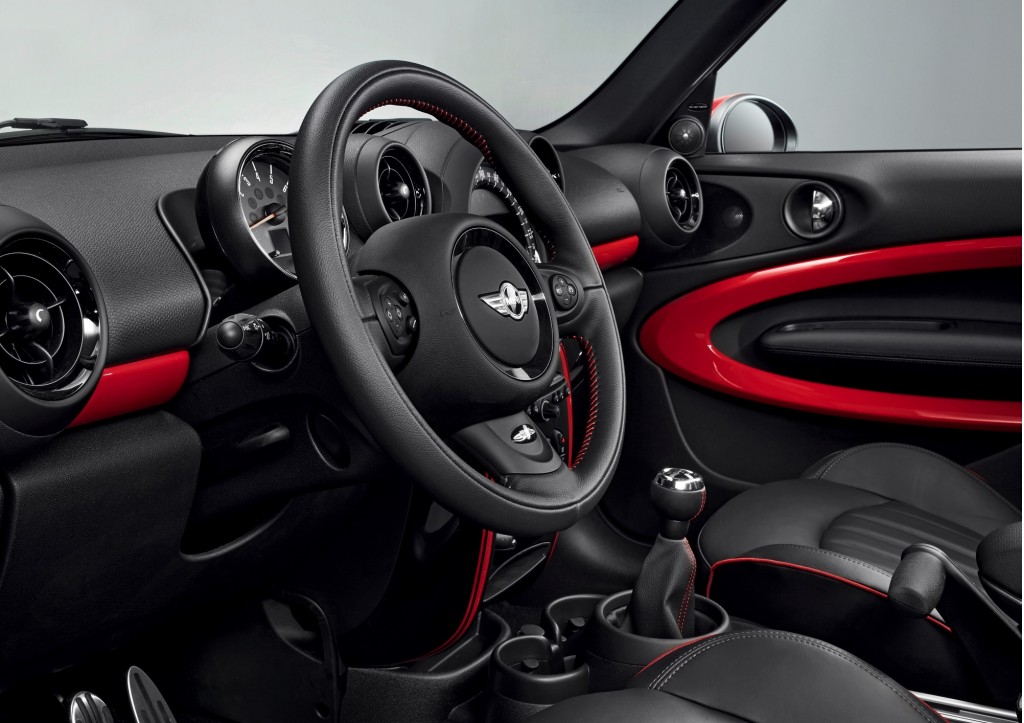 It might sound like we have our minds made up about the MINI JCW Paceman, but really we don't--we'd love to put one to the test on the track and on our favorite mountain roads. Hopefully we'll be able to do just that soon, and settle our questions about its purpose and ability for good.

Beyond the core statistics (which are all roughly identical to the MINI John Cooper Works Countryman revealed earlier this year), the MINI JCW Paceman gets 18-inch alloy wheels standard (19-inch rims are available), a Sport button that wakes up the engine and exhaust note as well as the automatic transmission on equipped models, and a host of John Cooper Works-specific appearance tweaks and aero aids.

Inside, the JCW Paceman is again, typically JCW and typically MINI. In the rear, two individual seats offer space for smaller humans or average-sized backpacks, while the dash, seats, and headliner all get JCW touches, set in a theme of black trim with red stitching. Optional tweaks include Carbon Black Championship Red Lounge Leather seats (figure that one out) and Chili Red trim are also available.

The MINI John Cooper Works Paceman doesn't yet have an official model year attached to it, but it will be on sale in March 2013 after finishing its duties at this week's 2013 Detroit Auto Show.