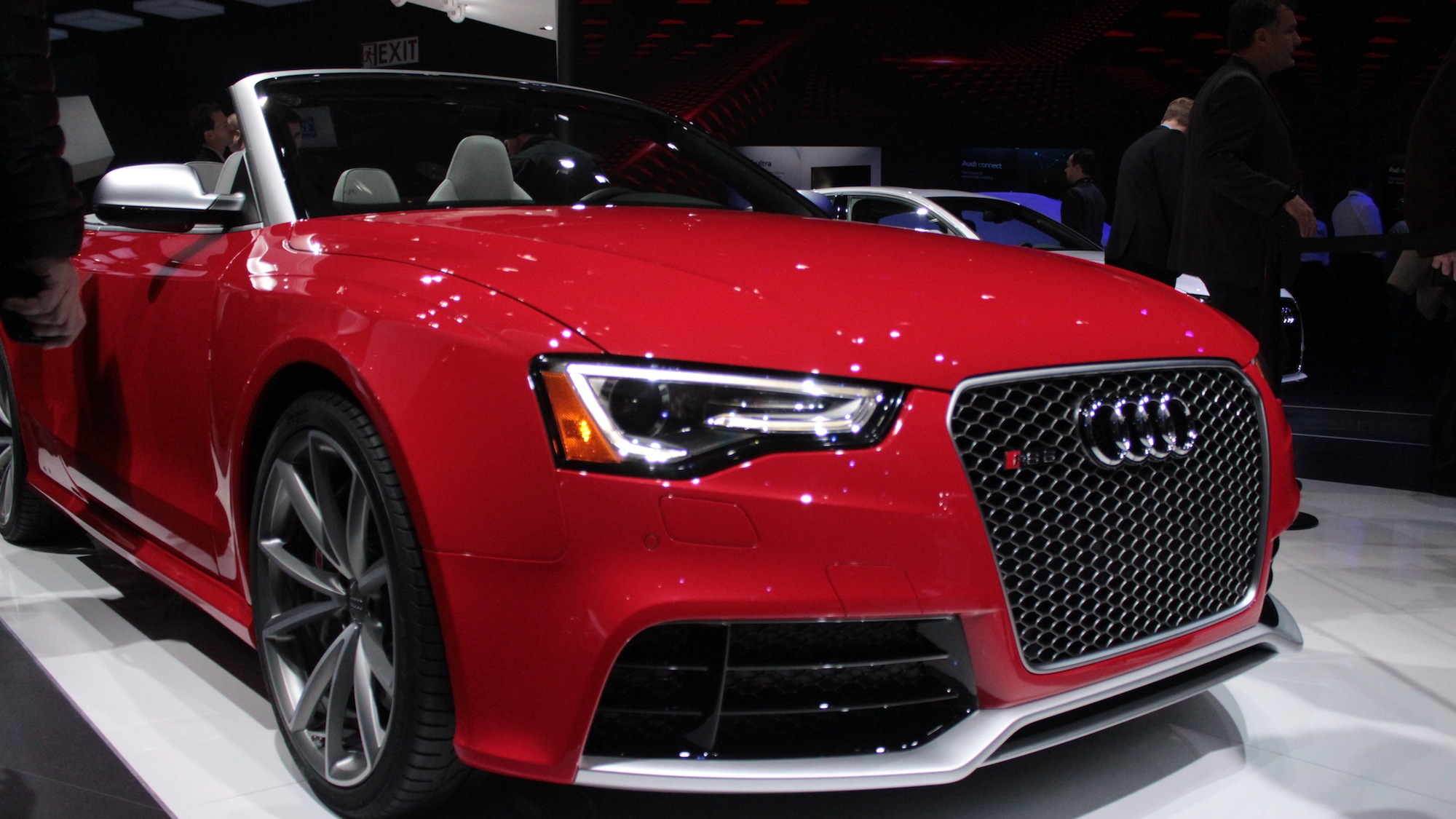 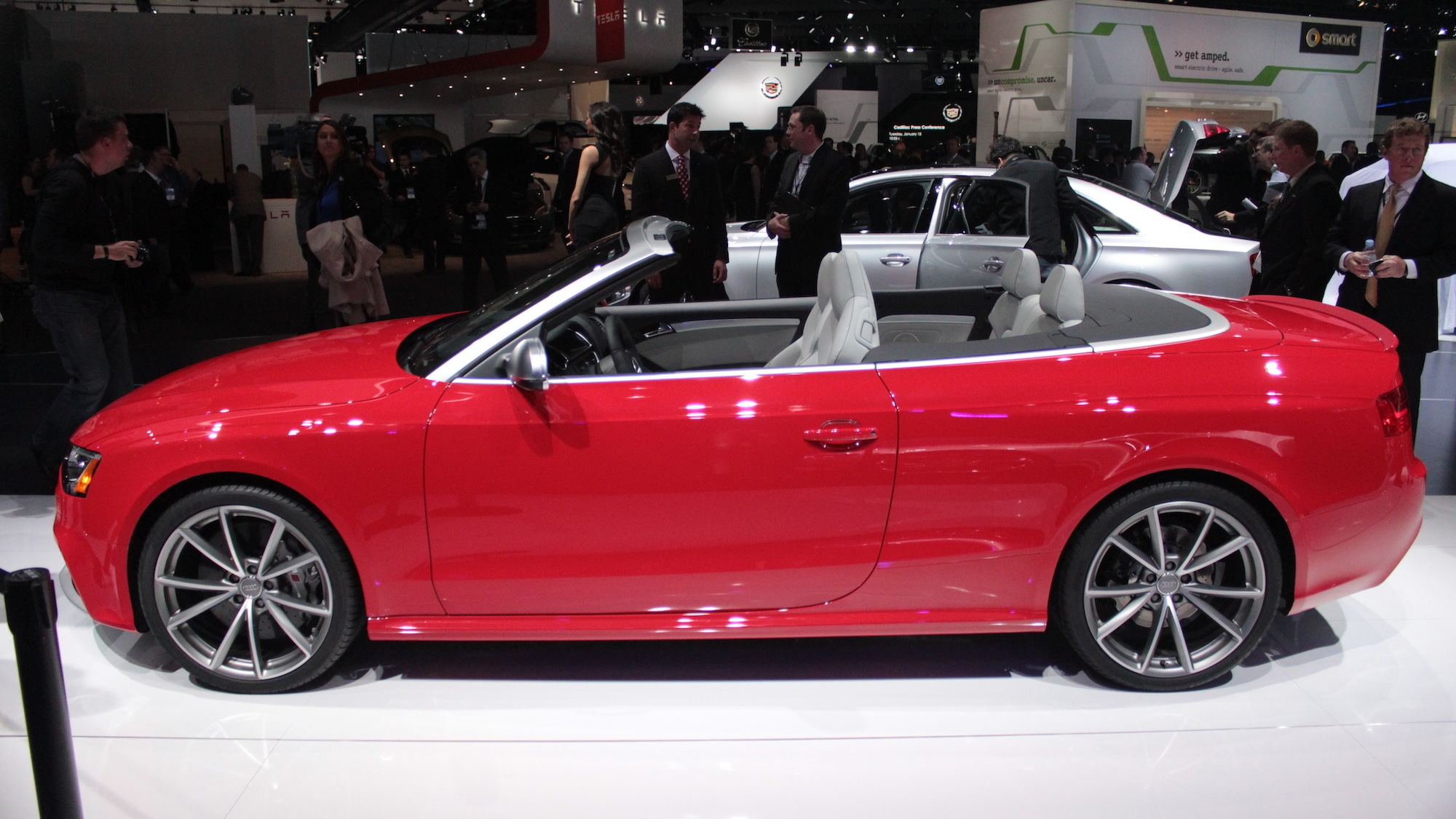 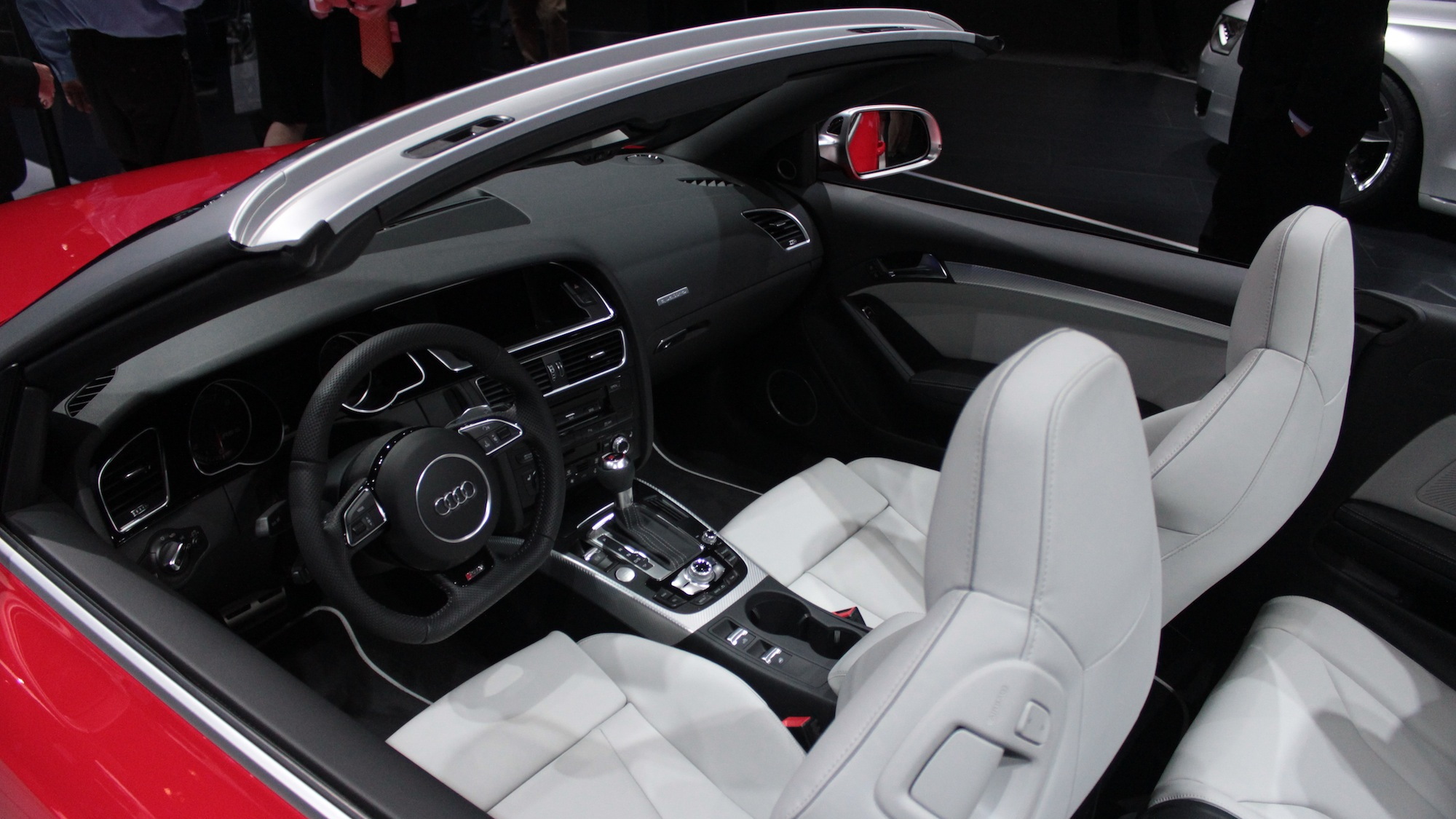 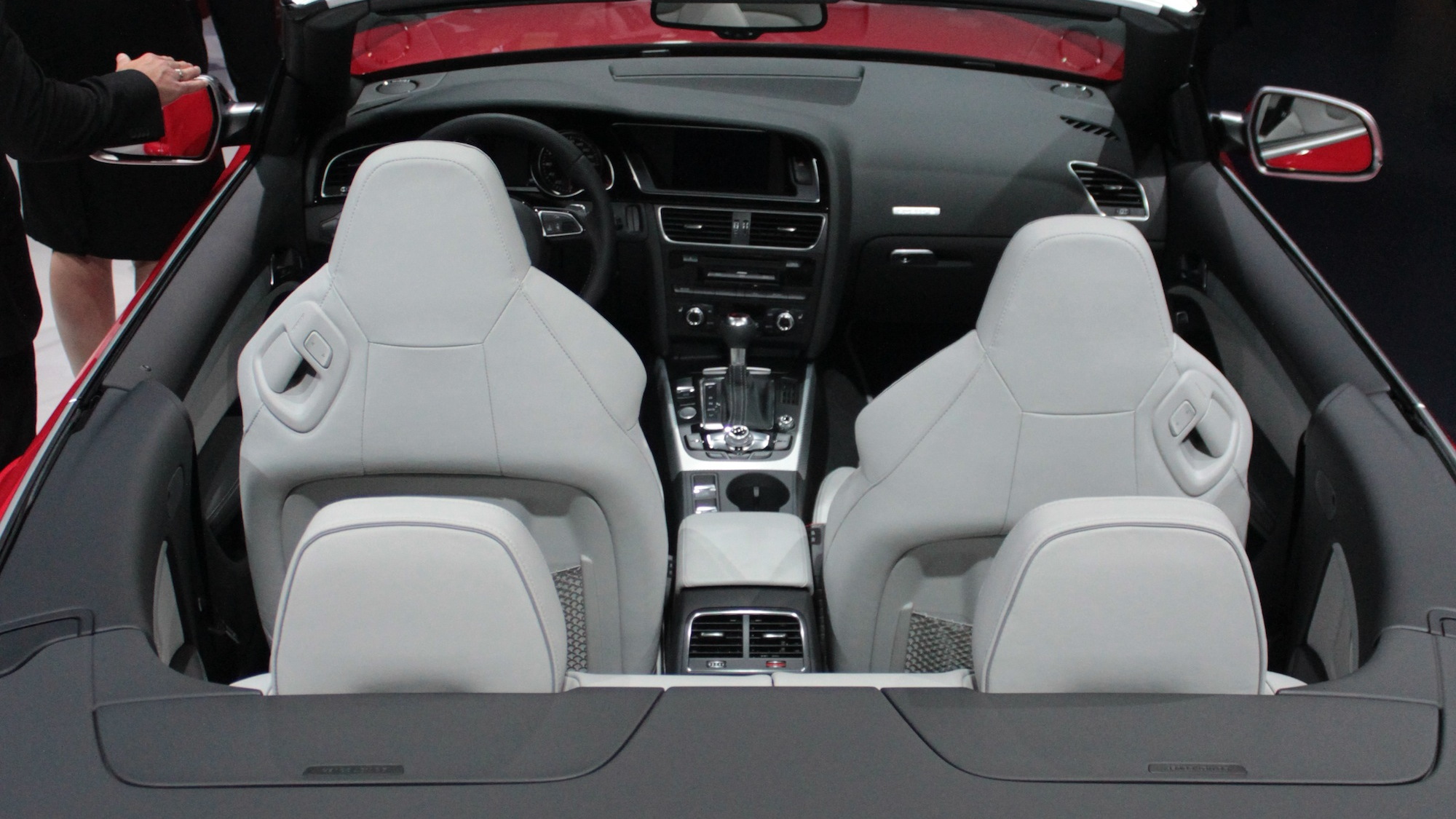 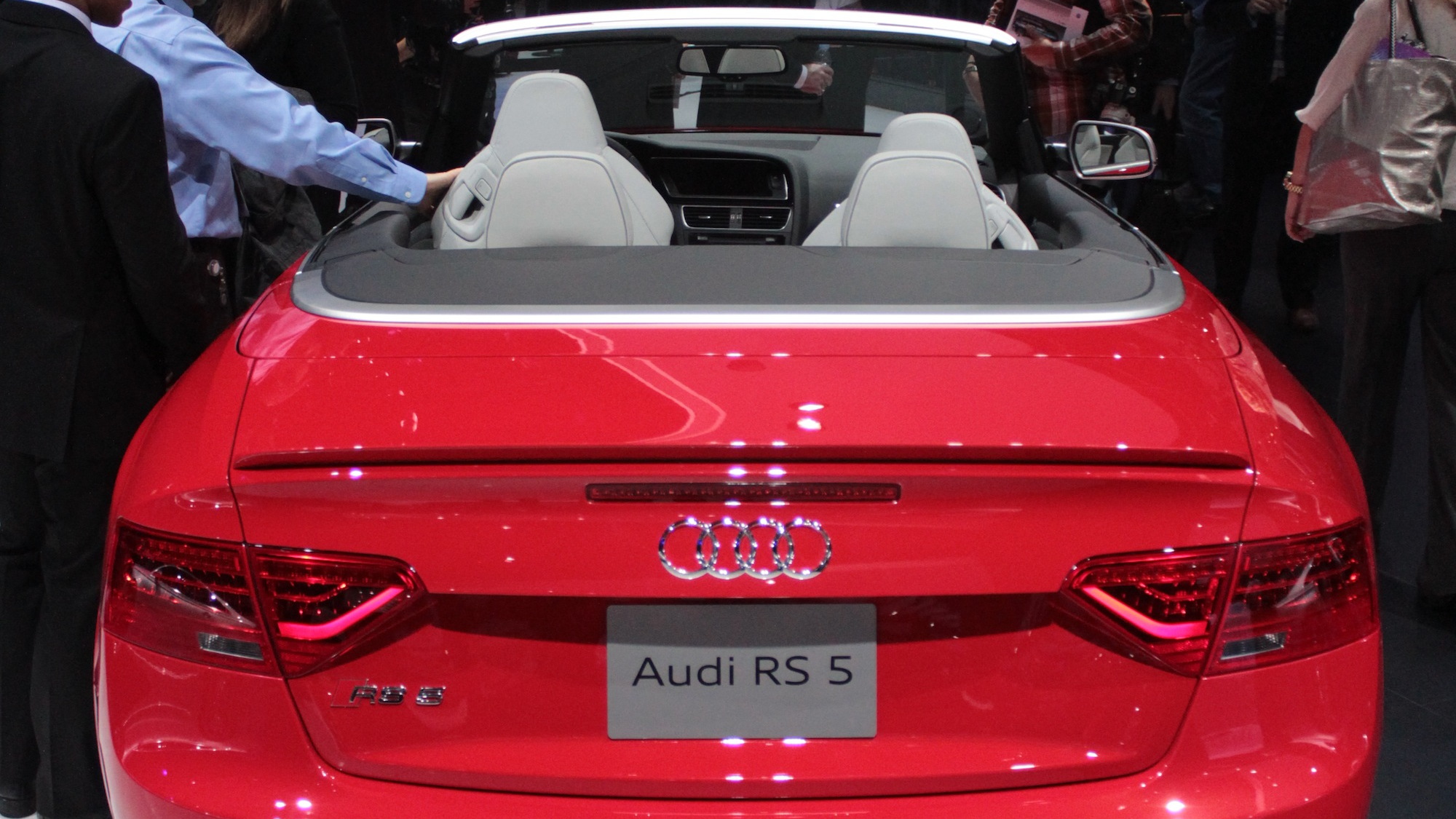 31
photos
Audi has finally confirmed that its new RS 5 Cabriolet will go on sale in the U.S., with the rapid drop-top making its North American debut today at the 2013 Detroit Auto Show before going on sale this spring as a 2014 model.

The car is the convertible version of the RS 5 that went on sale last year, delivering everything that the coupe has to offer but with the freedom of open air driving.

Based on the regular A5 Cabriolet, the RS 5 undergoes an extensive transformation at Audi’s go-fast division, Audi quattro GmbH, before emerging as a serious track performer complete with a sledgehammer of a V-8 nestled under its hood.

It’s matched to a seven-speed dual-clutch transmission and quattro all-wheel drive, with the latter featuring a compact and lightweight crown-gear center differential that can vary the distribution of torque between the front and rear axles quickly and over a wide range--up to 70 percent to the front and up to 85 percent to the rear, as necessary. The default is a 40:60 front to rear split.

Note, the crown-gear center differential works together with an additional torque-vectoring system that acts on all four wheels. If the load on the inside wheel is reduced too much, that wheel is braked slightly before it can begin to slip. If that’s not enough, Audi also offers its sport differential as an option. This feature actively distributes the power between the rear wheels.

All of this does add weight, however, with the RS 5 Cabriolet tipping the scales at over 4,400 pounds. Nevertheless, the vehicle can still sprint to 60 mph in just 4.9 seconds and easily reach its limited top speed of 174 mph.

The car also escapes a gas guzzler tax, with Audi estimating it will return a fuel economy of 16/22 mpg city/highway and 18 mpg combined.

To help save weight, the RS 5 Cabriolet makes do with a simple automated folding soft-top. This spans a well-appointed four-seat cabin and can be lowered in just 15 seconds, even when driving at speeds of up to 31 mph. When the top is down it only requires 2.12 cubic feet of its 13.42 cubic feet of trunk volume.

Special reinforcements contribute to the car’s high rigidity, and aluminum front fenders compensate for some of the added weight of the reinforcements. 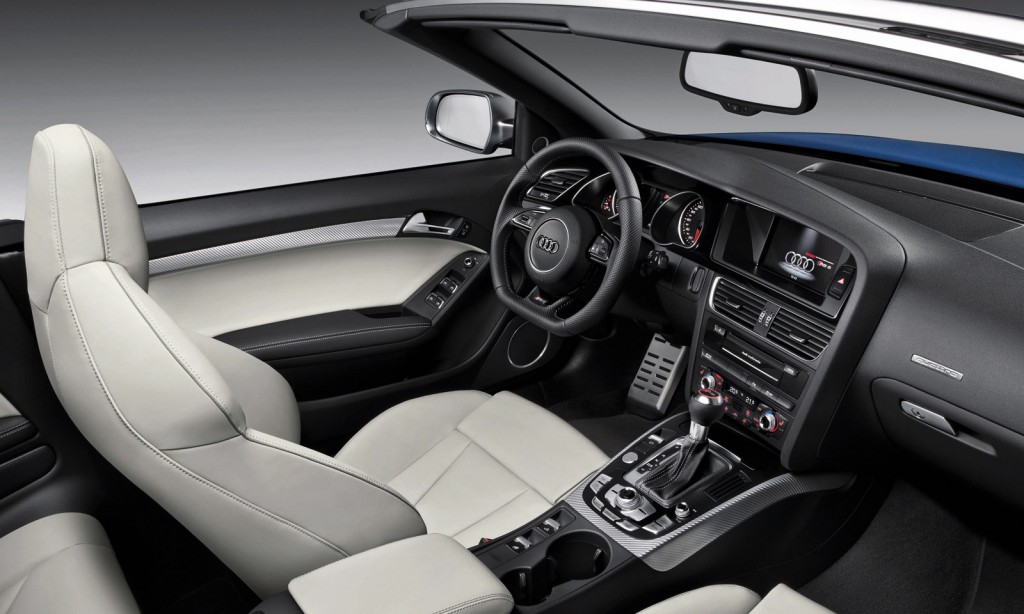 Inside the four-seat cabin, the standard sport seats up front have power adjustments, high side panels for optimal lateral support, integrated head restraints, a lumbar support and a pull-out thigh support. They are upholstered in a combination of leather and Alcantara or in the optional black or lunar silver Fine Nappa leather.

There is also a special Audi drive select feature, which enables the driver to vary the characteristics of the electric power steering, dual-clutch gearbox, throttle valves, and even the exhaust system sound flaps for improved dynamics. There are three different modes to choose from: comfort, auto and dynamic. Cars equipped with Audi's MMI navigation plus system has an additional mode, “individual,” which allows custom settings.

But it doesn’t end there. Audi drive select also lets you play around with the suspension settings. In the RS 5 Cabrio, each pair of diagonally opposing shock absorbers is interconnected via hydraulic oil lines and a central valve; when cornering at speed, the system increases support of the spring-deflected front wheel at the outside of the curve. Audi drive select lets you adjust the severity of the system, once again on three different levels.

Expect pricing to be slightly higher than the $70k sticker of the RS 5.

Joining the 2014 Audi RS 5 Cabriolet in Detroit is the recently updated 2014 Audi R8 range, which also goes on sale this spring. For more on the 2013 Detroit Auto Show, be sure to check our dedicated show hub.