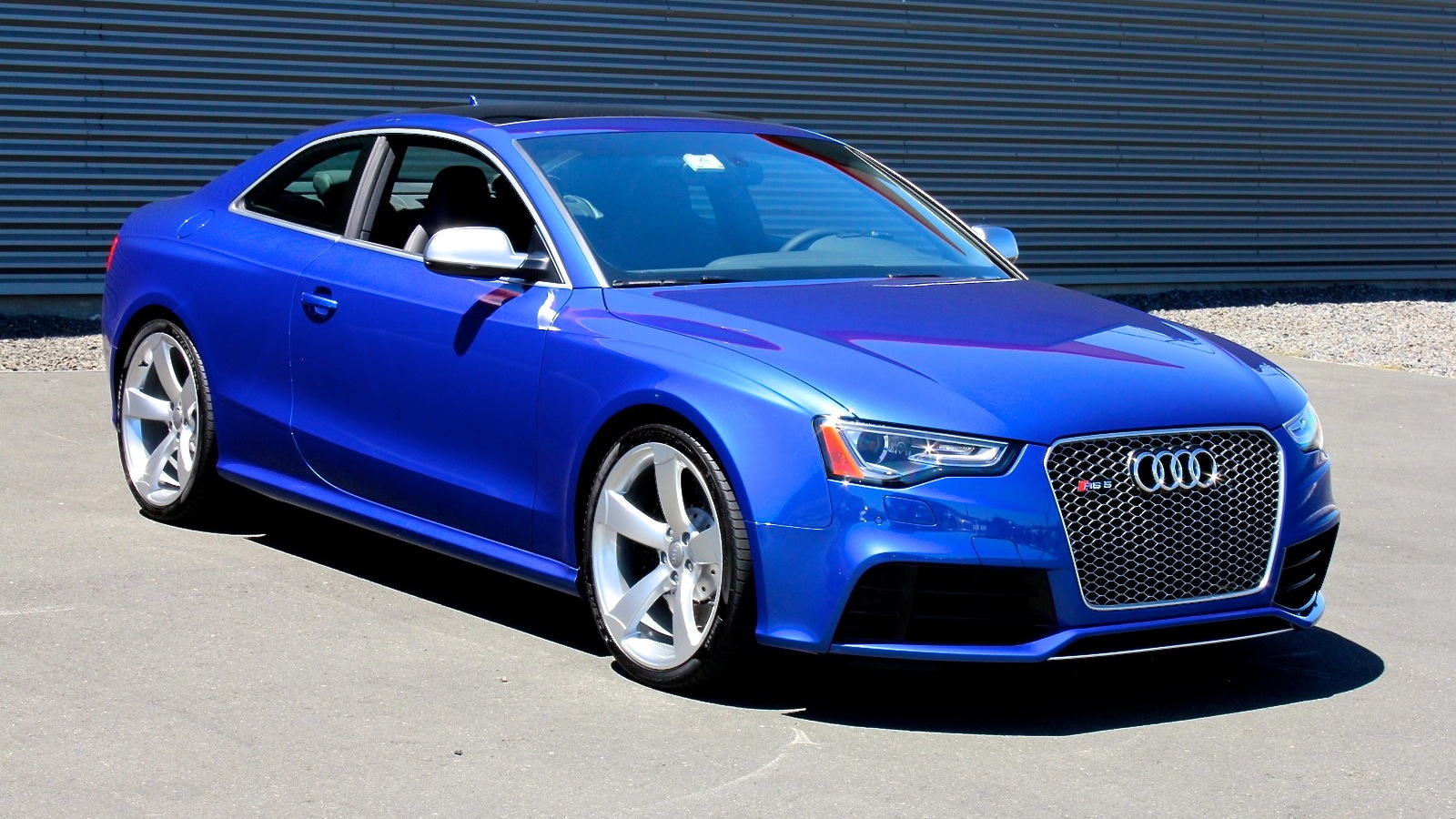 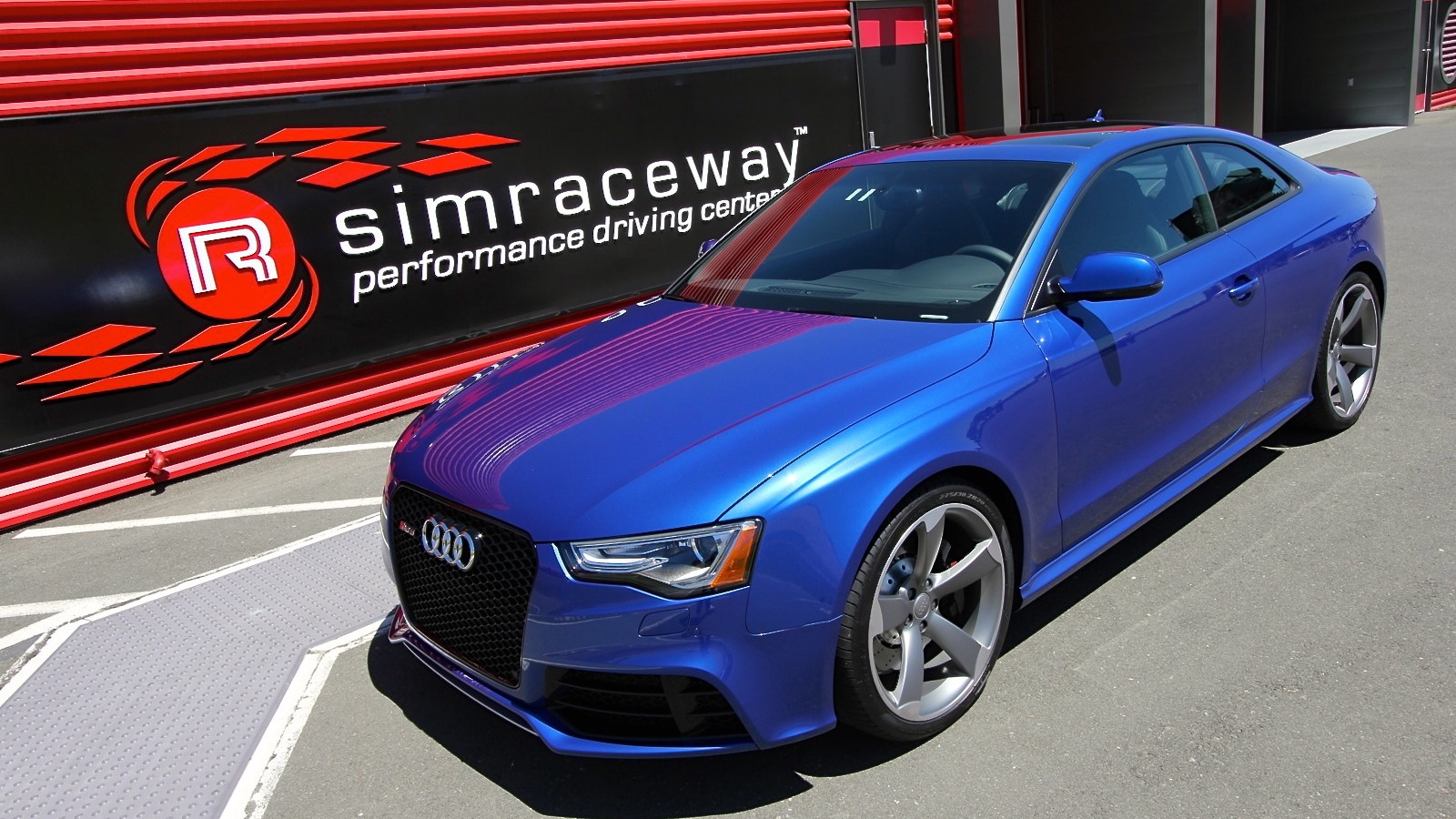 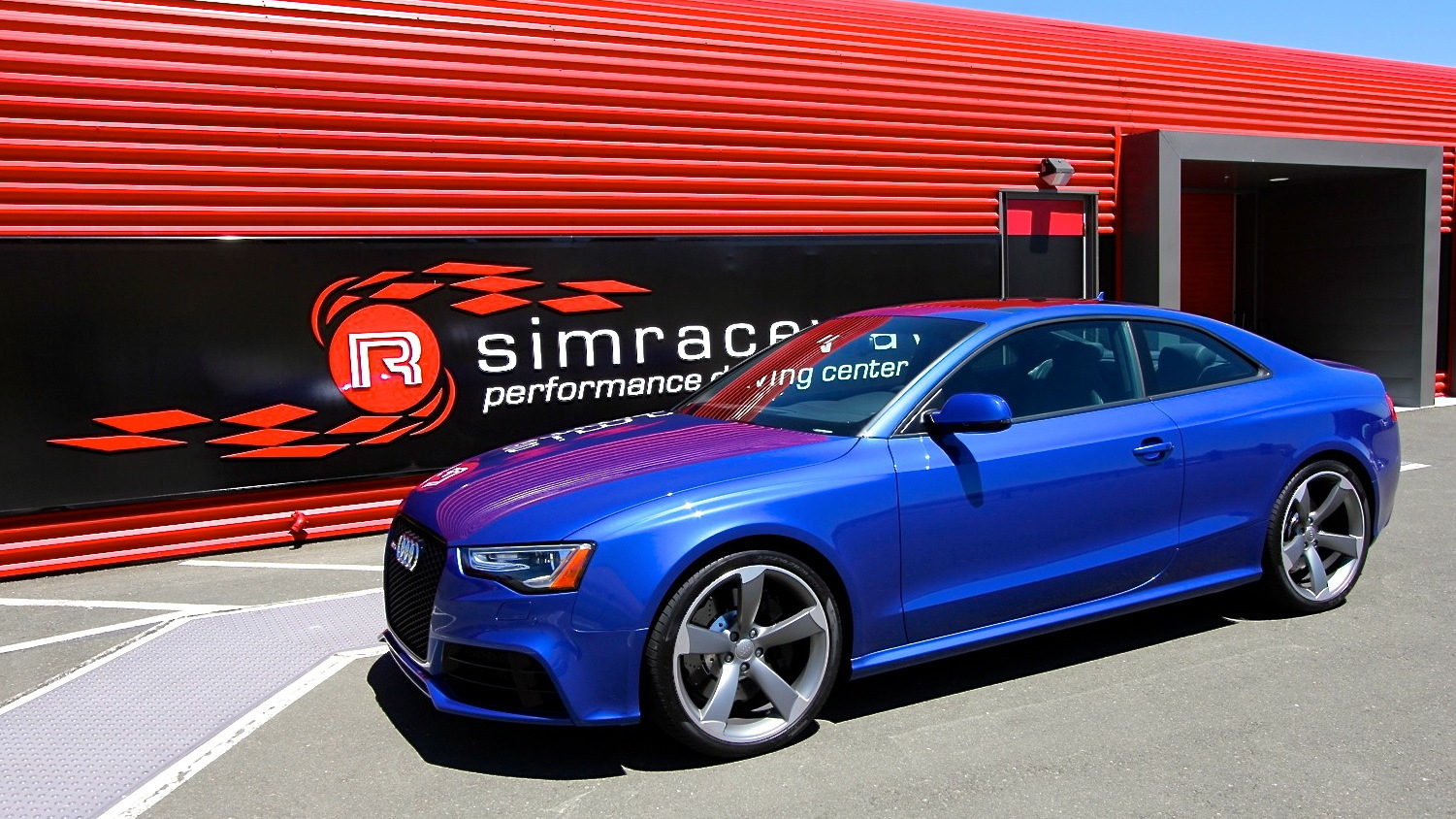 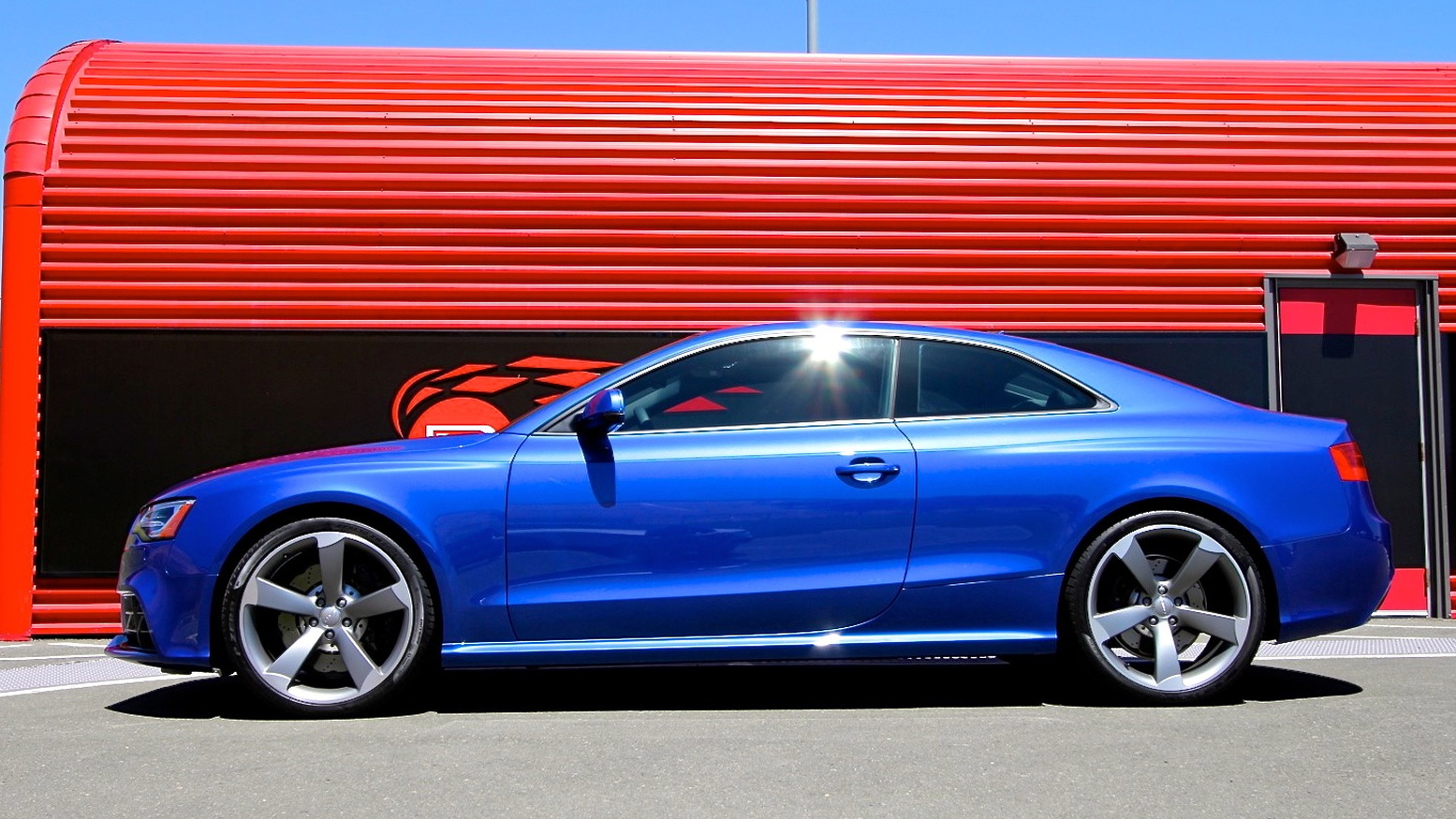 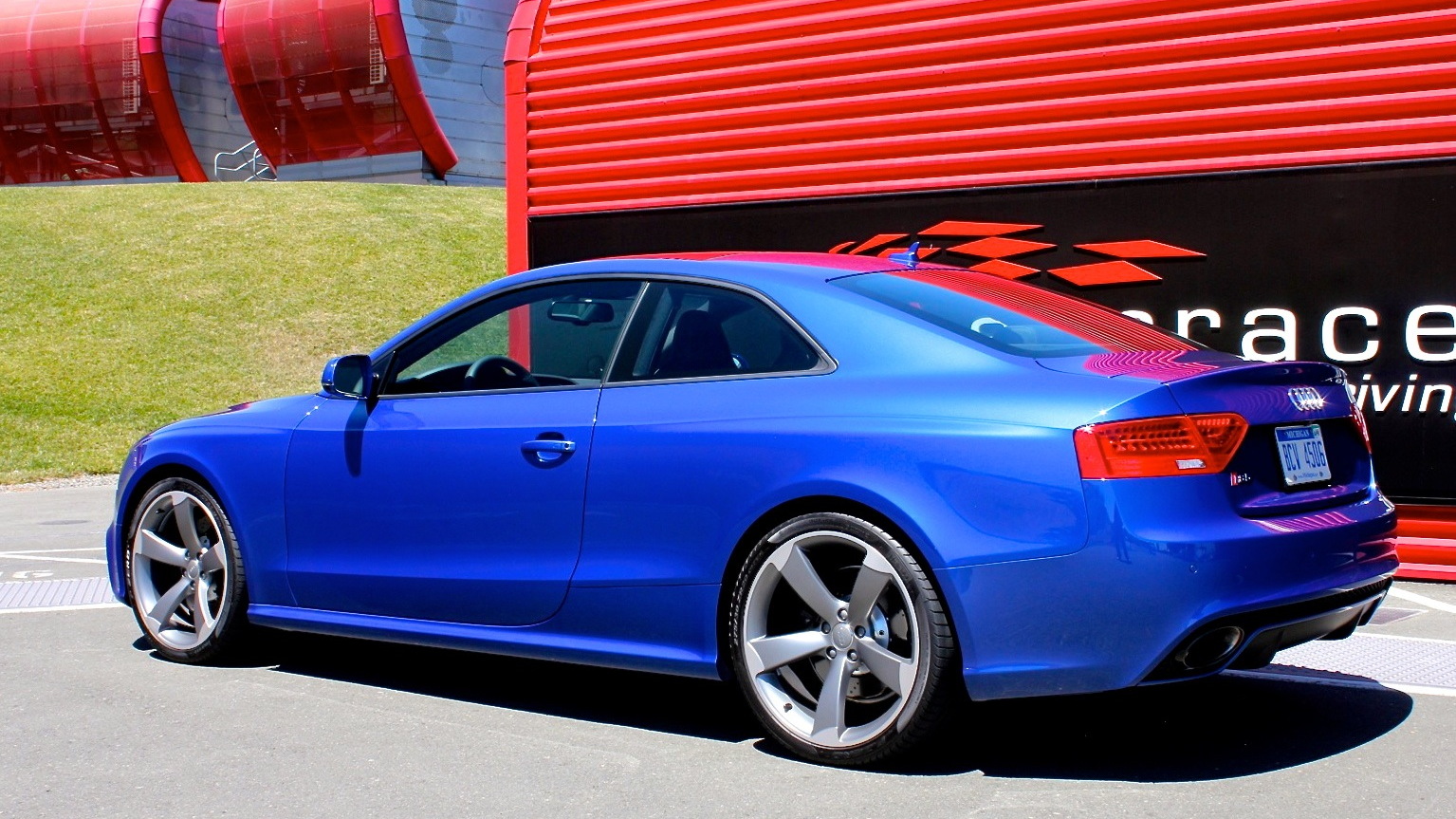 That recurring dream, the one that scares the whee out of even 50-year-olds, unfurls from my brain and falls right into my lap as soon as I plug in Audi's jaunty little USB jump drive into the black box.

Is there a test this morning? 'Cause I forgot to study last night, and there's no way I'm reading all of "The Stranger" on this 16-minute bus ride to school.

Why worry? It's just three or four years since I drove Sonoma Raceway the last time, and nothing's changed, except for the name.

Sonoma's still a technical track. That's the time-honored euphemism for "walls hurt." And today, it's barely toned down, just some cones placed here and there for guidance on braking points.

Why worry? It's just a group of car writers with varied levels of experience, a brace of 450-horsepower Audi RS 5s, and a hard, hot, sunny sky, baking off all the sweat pooling in the black head sock stuck to my head.

Did I mention there's also the RaceKeeper? It's a veritable Tupperware for digital video, perfect for preserving driving memories. Either that or it's the omniscient critic of your every gaffe, always on the record. RaceKeeper's cameras point at you, the mic perches close enough to hang on every cuss word like a church gossip. Even the little red LED "on" indicator light stares up at you without flinching, as if to say, really.

That fret dissolves rapidly with the RS 5. It's a rollicking ride to tour Sonoma, especially if you're a fan of the balance and control that comes from all-wheel-drive cars that blast along, covering up naivete with ass-saving traction. The RS 5 has it, while none of its head-to-head challengers--CTS-V, C63 AMG, M3--do. Audi, different. There you go again.

The RS 5's also the last of this genre of Audis to carry a V-8 engine, at least in the current generation. The RS 5's crisp exhaust bark issues from a 4.2-liter V-8 with its roots in the R8 semi-exotic and its V-10 (not the older V-8). Noisy and excitable off idle, the V-8 hits a torque wave at 4000 rpm, climbing through 6000 rpm on the way to an 8250-rpm redline, and through stratospheric numbers that still fall shy of those generated by the awesome supercharged eight in the Caddy CTS-V. The Audi rumbles with 450 horsepower and 317 pound-feet of torque--darting to 60 mph in about 4.5 seconds like it's evading a summons, surging to a 174-mph top end you probably can hit in a state where triple-digit speeds don't end in multi-year penalties. The S5 can't rival those rivals; the RS 5 pulls up smartly along their flanks.

How it gets to speed is important, because the RS 5 abandons some of the pretense of lightness and simplicity that colors the other Teutonic and mock-tonic cars chasing the same money. The RS 5 does it with a dual-clutch automatic and quattro all-wheel drive, with picture-perfect launches within reach thanks to launch control, shift paddles, and all that constantly redistributed traction. The quattro setup here's tuned for 60 percent of the weight to distribute to the rear until it needs to move around--when a Torsen differential sends it on its way, 85 percent to the rear if needed, or 70 percent to the front, and torque vectoring balances power side to side between the rear wheels.

Ethical objections to Audi's paddle-shifted dual-clutch just don't hold up. It's a brilliant piece of work, extremely quick to swap gears, programmed here to obey the paddle and not its own brain. The RS 5'll hit the rev limiter and stay there, and it only gets more eager and edgy when Drive Select, Audi's configurable-car controls, are dialed up to Dynamic from their streetable Comfort and Auto settings. Drive Select changes up throttle, transmission, and sets the variable steering to a fixed ratio in the RS 5--but not the suspension, which also has adjustable controls on Euro versions, but is plain steel and aluminum here. It's better that way: as we've found in the S5 and even the A5, Drive Select can offer too many options that don't match each other well.

Hauling everything down back to suborbital speeds are eight-piston front brakes with raised discs for heat dissipation, or optional carbon-ceramic discs that cross over into truly must-have, truly exotic territory for a machine that bridges the everyday and track driving spectrum as easily as the RS 5. Even the optional 20-inch wheels seem like a necessary extravagance compared to the bone-stock-gorgeous 19-inchers. The sport exhaust? It's a cost-no-object thing.

A quick track talk, and we're buckled in for Sonoma's kinky take on afternoon delights. The warm-up laps bring it all back--the uphill clabber right out of pit lane, the skid marks of doom careening off from turn 8.

The RS 5's the emotional car in the A5 range, according to the morning preso, and it's holding true. The V-8 rips to life, even snarkier than the old S5's eight and way more vocal. Building up speed comes quickly: there's still some body roll even with the RS 5 tightened down into its most aggressive setup, but it moves with predictable footwork. You get confident quickly, and the grip on the wheel gets less white-knuckled, more sensitive--more open to a light touch. It's all understeer, almost all the time, until the RS 5 takes a set into a corner. Then your right foot can make the call.

Still, it's Sonoma. A driver like Hans Stuck can say "never lift" because he's full of talent. I'm full of something that requires a Depends, so I lift a little. The RS 5 refuses to snap, and just curls back into that default understeer. Rolling into the throttle prods it out of yawn mode, and I have to give it credit--it never gets impatient, waiting for me to get how much is still left in its portfolio.

It digs in, and so do I. I let it lighten up over the second blind turn, and tuck it in for the double-apex downhill ahead with a little throttle before I unwind it and let it flatten out for a big, long, fast straight. We boomerang out of Turn Six and I hang on late for the next set of esses, before a final surge into fourth and a final brush on the brakes, before glancing by the final curb and cooling down the rest of the way into the pits.

For a minute, I bother to play with the luxotouches we've diddled with in our full review of the 2013 Audi A4 over on TheCarConnection. The RS 5 has a sport interior with firmer seats and a flat-bottomed steering wheel; a choice of Nappa and Alcantara trim; aluminum, stainless-steel, piano-black or carbon trim; aluminum pedals; a lap timer; and RS badging. Other major options include blind-spot monitors, active cruise control, and a Bang & Olufsen audio system.

We'd pay for that sound, as well as Audi's MMI and navigation system, which ties in with Audi Connect 3G wireless service and Google Earth and Street View mapping for what's indisputably the most beautiful and effective nav system on offer today. The maps show me from an overhead view, sidling into the pits from an ESPN angle that may as well be called the HeroCam. And since we're just a few dozen miles from Silicon Valley, the maps themselves are just a few weeks old--new construction nearby already shows on the screen.

Audi promises they won't do an RS edition of every model, and given the age of the current A4/A5 lineup, this could be the new plus ultra of this generation. It feels every ounce of it, bracingly fast and unflappable.