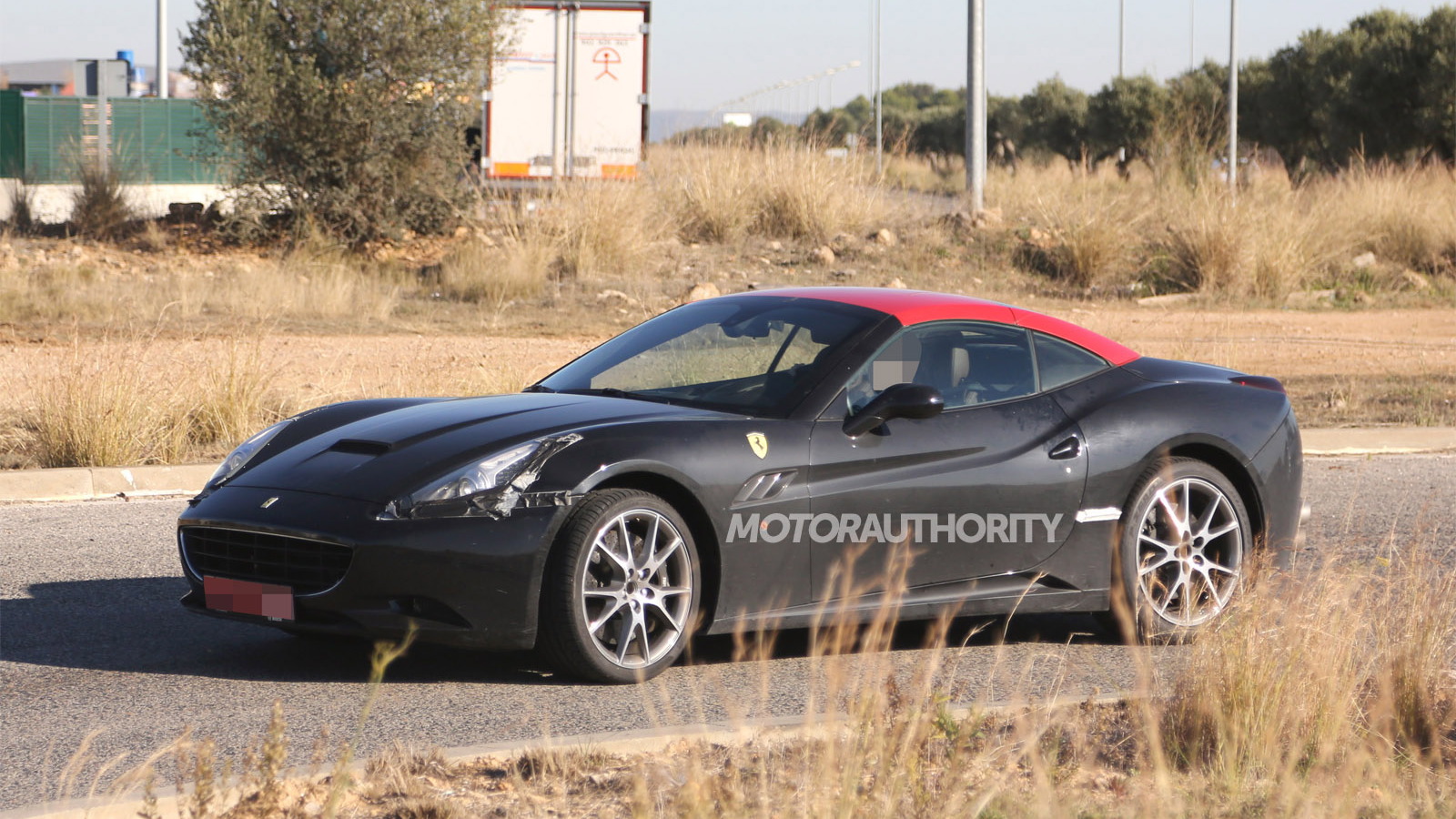 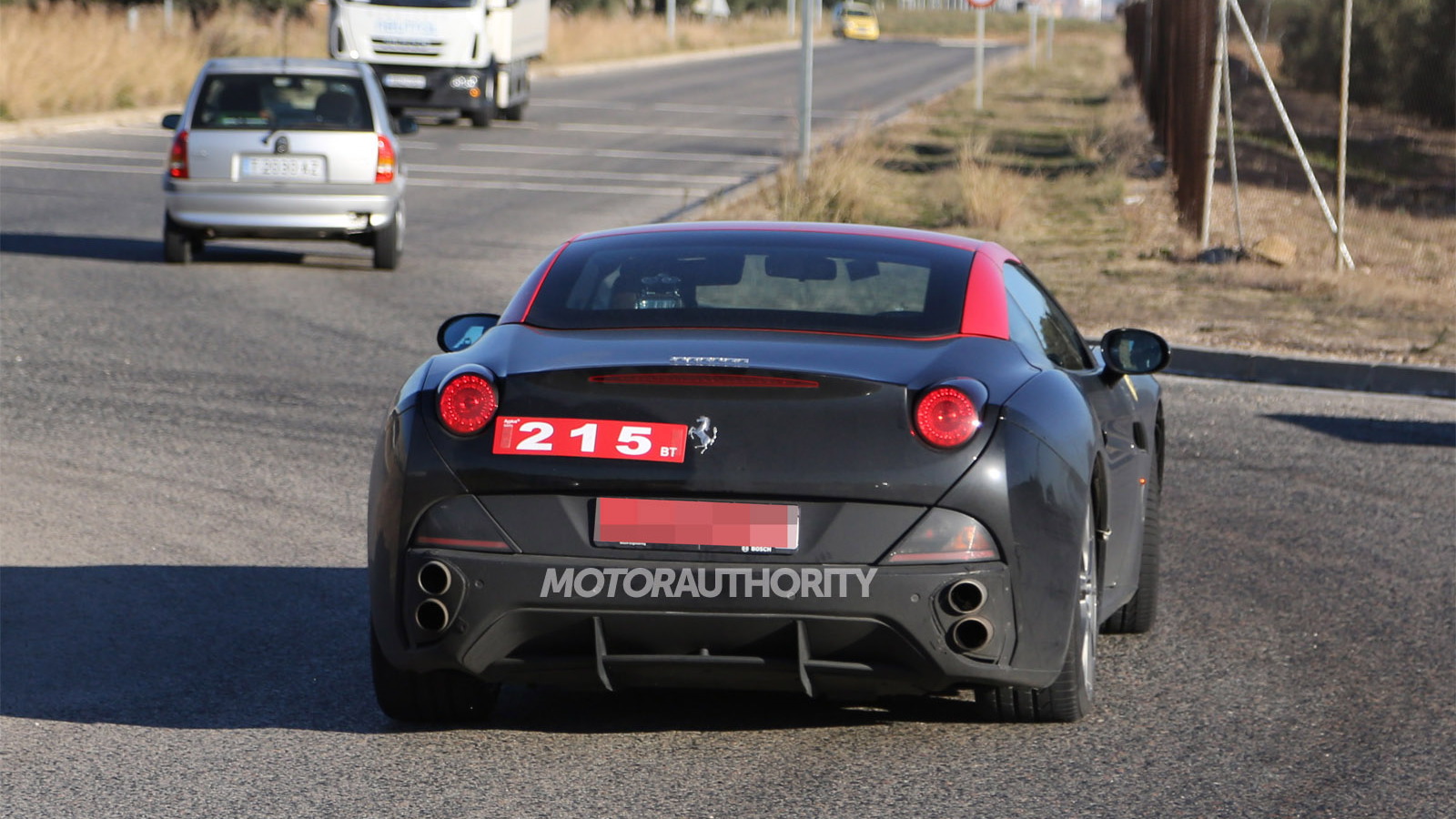 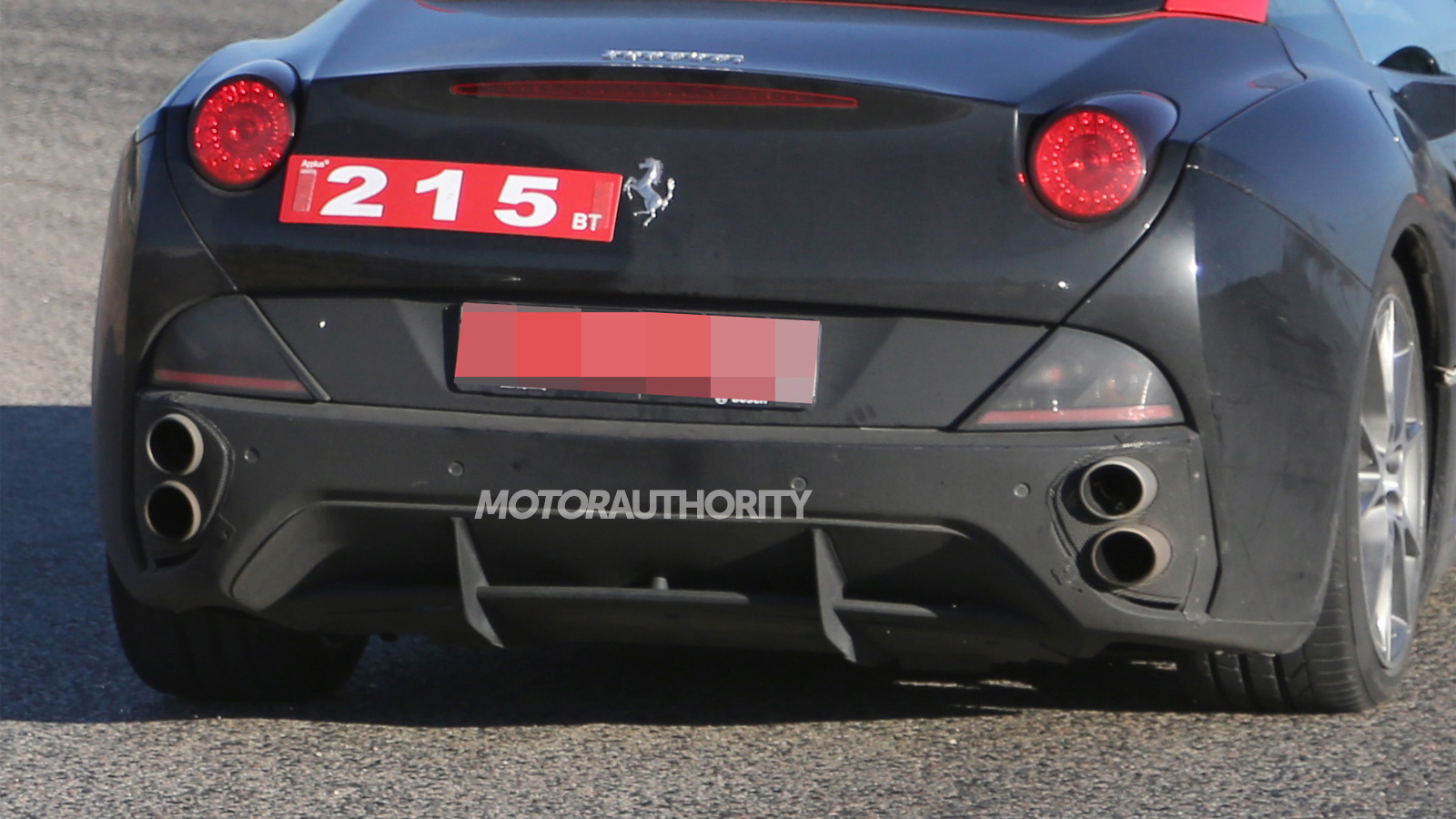 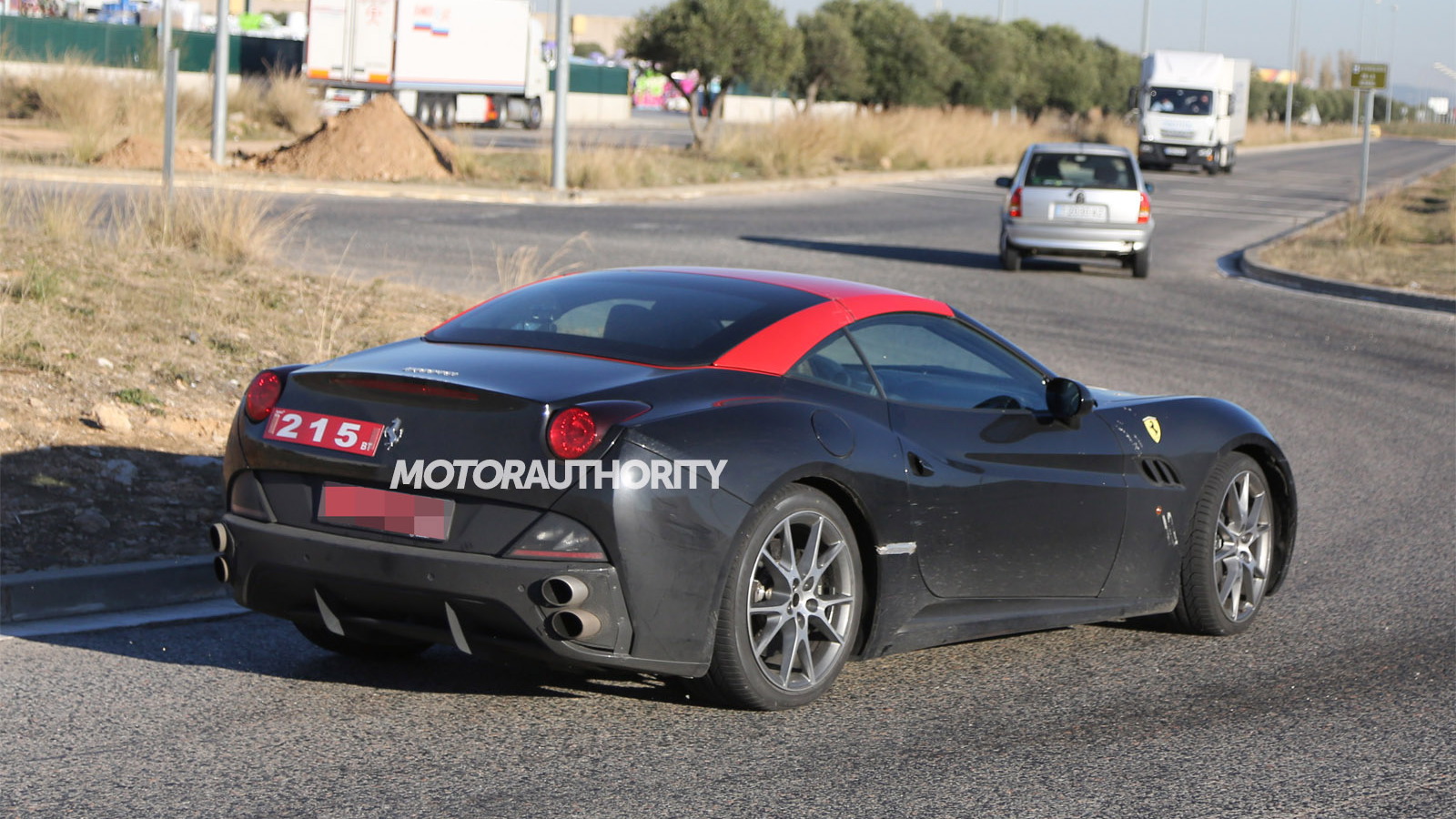 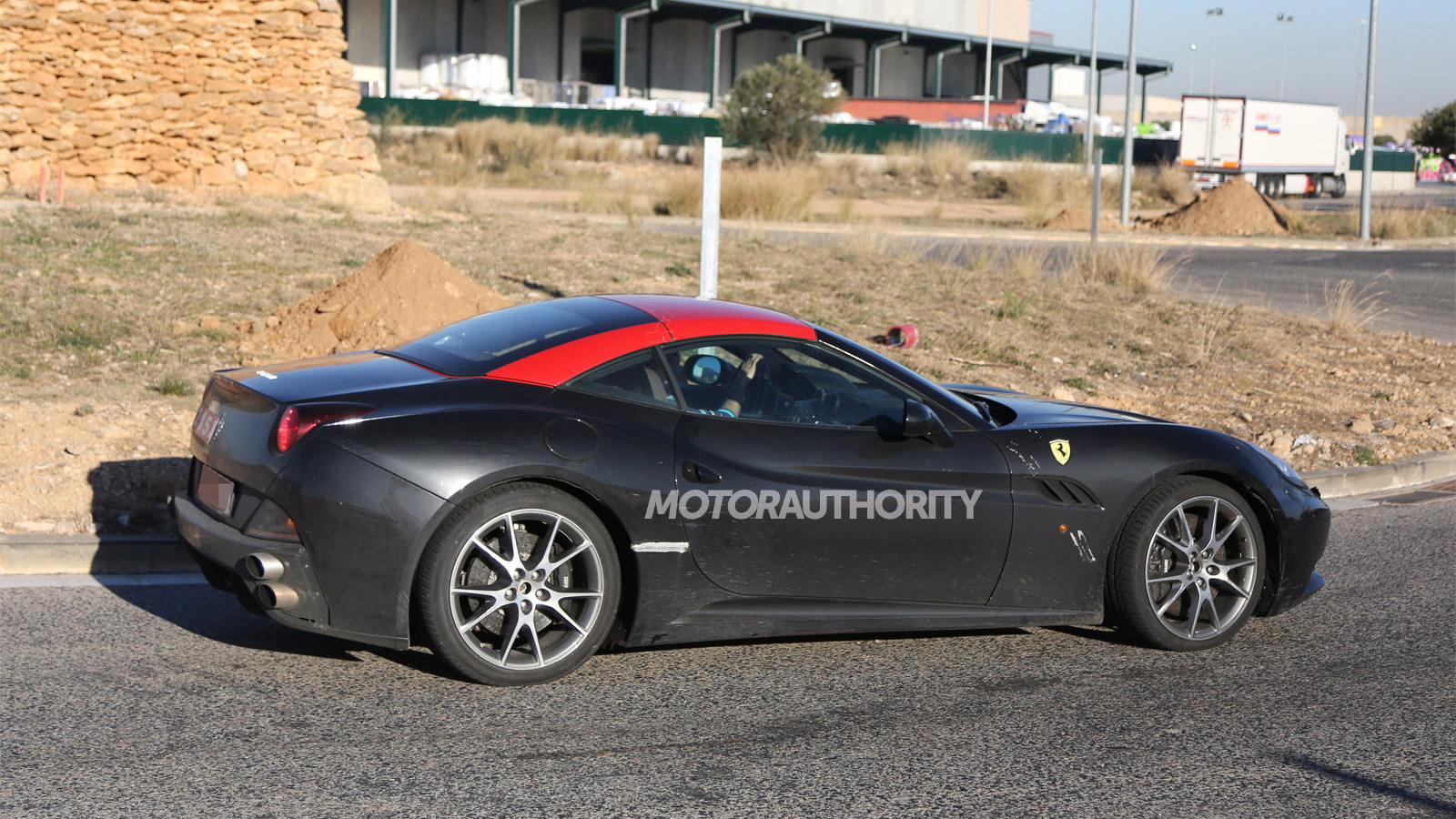 16
photos
With the current California convertible delivering close to 500 horsepower, able to accelerate to 60 in under 4.0 seconds and capable of reaching speeds of almost 200 mph, the ‘entry-level’ Ferrari is hardly what you’d call lacking in performance. But next to cars like the 458 Italia, the FF and F12 Berlinetta, and especially the LaFerrari, the California has received flak for being a little soft, looking somewhat ungainly and not handling quite as good.

The California received some updates for 2013, which helped address some of those issues, but the car that will replace it is expected to rewrite the rulebook on just how good an entry-level Ferrari can be.

Today, a test mule for the Ferrari California’s replacement has been spied again, more than a year after the first mule was spotted. The newest photos of the California mule in testing reveal changes to the rear of the car, especially around the exhaust outlets, further hinting that the mule is being used specifically for engine testing.

The California's replacement is expected to go on sale in 2014, but as a 2015 model. Patent drawings of what appears to be the next "mainstream" Ferrari recently leaked, suggesting the new car will be somewhat more angular in design.

Ferrari engineers are using the current California to hide the new car’s mechanicals, but several key features give away its identity. Most notably, the test mule is wearing the tapered headlights that we’ve seen all other Ferrari models adopt. These are designed in such a way that they aid airflow to other parts of the car, so their application even at this early stage of development is crucial.

The intakes and exhaust tips are also different, suggesting the car’s new powertrain has been fitted. Interestingly, it appears the stacked exhaust tip design of the current California will be scratched in favor of a more conventional horizontal arrangement.

The big news is that the new car will feature a twin-turbocharged V-8, possibly displacing less than 4.0 liters. This new engine, which is being developed by Ferrari for use in the California replacement, has already been seen in the 2014 Maserati Quattroporte. In Ferrari trim, the twin-turbo V-8 could develop even more than the Maserati's 530 horsepower, though even that surpasses the California's current 490-horsepower rating.

It is expected to be a thoroughly modern unit, complete with an F1-inspired KERS that's tipped to deliver an additional 100 horsepower when needed. Ferrari’s KERS recaptures energy under braking and uses this to charge a lithium-ion battery (supplied by Samsung). This battery then powers two electric motors, one to aid engine performance and the other to power ancillary features.

There won’t be an electric-only mode, though Ferrari is adamant its hybrid system will still reduce CO2 emissions by as much as 40 percent compared to a vehicle without the system. The LaFerrari has already shown what Ferrari can do with a hybrid system.

To further boost performance, Ferrari engineers are said to be focusing on reducing weight to well below the 4,123-pound curb mass of the California. More carbon fiber will be employed, as well as plenty of aluminum, to offset the weight of the hybrid system and ensure the new car remains light. The folding hardtop is expected to remain, but may be replaced by a unit similar to the 458 Spider’s lightweight mechanism.

Some initial performance estimates are a 0-60 mph time of less than 3.5 seconds and a top speed of around 200 mph, making this new car almost as quick as the more expensive 458 Italia and even coming close to matching the performance of the F12 Berlinetta.

In terms of styling, expect some retro cues and a much prettier shape overall. Leading the design work is Flavio Manzoni, the head of Ferrari’s in-house design studio Centro Stile and the man in charge of designing the LaFerrari. Italian design house Pininfarina will also play a role in shaping the design, however.

The Ferrari California, despite its entry-level positioning, is an important model for the Italian company. More than 8,000 examples have been sold since its launch, with 70 percent of these going to customers new to the brand. Getting the design right for its replacement is therefore crucial.