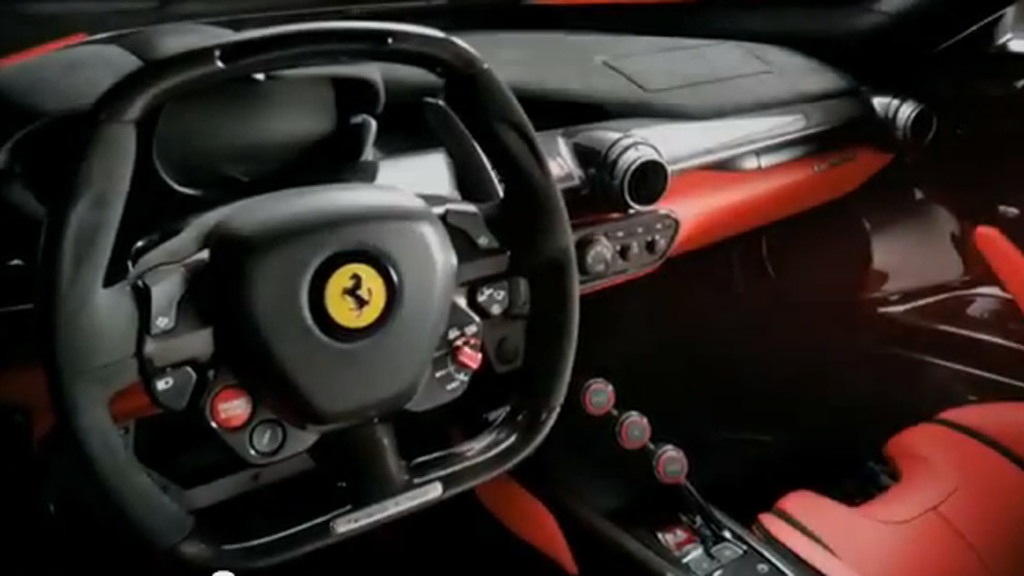 You are looking at the first images of Ferrari’s new flagship supercar, the LaFerrari, Italian for “TheFerrari.” Code named the F150, the car that replaces the Enzo at the top of the Ferrari hierarchy made its debut today at the 2013 Geneva Motor Show, easily stealing the limelight from all other debuts.

We can confirm that its powertrain is a hybrid setup that pairs Ferrari’s 6.3-liter V-12 engine and seven-speed dual-clutch 'box with its HY-KERS hybrid setupto boost output and lower emissions. The system also combines two electric motor-generators: the first motor provides drive to the vehicle, thus aiding the V-12, and it also recovers kinetic energy during braking, storing it in the car’s lithium-ion batteries. The second motor is driven by the V-12 and is used to keep the charge level of the batteries constant. In addition to this, the second motor also can directly power electronic ancillary systems such as the lights.

Peak output of the combined system is a staggering 963 horsepower, as measured in metric figures. In good ol’ American numbers that’s still 950 horsepower to play with. Torque comes in at more than 660 pound-feet, with the final figure not yet confirmed.

Ferrari hasn’t given final performance numbers just yet, but says the LaFerrari will reach 60 mph in under 3.0 seconds and reach a top speed in excess of 217 mph (expected to be 230 mph). The car’s closest rival, the McLaren P1, which also debuts in Geneva, has similar specs but has its top speed limited to 217 mph. Another area were the LaFerrari is said to outmatch the P1 is in the 0-186 mph sprint, which the Ferrari should do in 15 seconds versus the McLaren’s quoted 17 seconds.

The LaFerrari follows in a long line of ‘special series’ cars from the famous Italian sports car manufacturer. From the GTO of the 1980s right up to the Enzo supercar launched last decade, Ferrari’s special series cars have always been heavy hitters and some of the best examples of the transfer of technology from Formula One to the road.

In the case of the latest car, two of the headline technologies is the new hybrid system, Ferrari’s first on one of its production cars, and a new carbon fiber monocoque developed by Ferrari’s F1 technical director Rory Byrne. According to Ferrari, the central structure displays 27 percent more torsional rigidity and 22 percent more beam stiffness than the Enzo’s already stiff core.

The structure features no less than four different types of carbon fiber, all hand-laminated and autoclave-cured in the racing department using the same design and production methods as the F1 car. This helped optimize the design: various functions were integrated (e.g. seats and battery compartment) into the chassis. The final curb weight, not confirmed yet, is expected to be around 2,800 pounds.

Purists may dislike the thought that Ferrari’s latest and greatest supercar is a hybrid, but the beauty of the system is that it not only cuts fuel consumption but it also allows for precise torque vectoring, traction control and brake force distribution. Ferrari claims a 10 percent reduction in the 0-124 mph sprint, along with a 40 percent reduction in emissions compared to a non-hybrid solution.

The hybrid also helps achieve those impressive power figures. While the car’s 6.3-liter V-12, a variation of the unit from the F12 Berlinetta and FF, is a masterpiece on its own, its peak output only reaches 789 horsepower--despite revving to 9,250 rpm. The main electric motor helps lift that to the 950 horsepower figure that will ensure the LaFerrari is the fastest road car to ever emerge from the Ferrari factory in Maranello.

Powering the electrical system is a lithium-ion battery that’s sourced from Samsung and weighs just over 130 pounds by itself. The batteries are charged in different ways: under braking (even hard braking with the ABS active) and every time the V-12 produces more torque than required, such as in cornering. In the latter instance, rather than being sent to the wheels, the excess torque is converted to energy and stored in the batteries.

Another marvel is the car’s active aerodynamics. The engineers’ aim was to deliver the highest degree of aerodynamic efficiency ever achieved with any road car, with a coefficient of drag of nearly 3.0, thanks to technical solutions honed with CFD analysis and fine-tuned in the F1 wind tunnel.

To boost efficiency, the LaFerrari sports active aerodynamic devices front (diffusers and guide vane on the underbody) and rear (diffusers and rear spoiler) which generate downforce when needed without compromising the car’s overall drag coefficient. These devices deploy automatically on the basis of a number of different performance parameters which are monitored in real time by the car’s dynamic vehicle controls.

One further innovative aspect of the LaFerrari is the integration of its active aerodynamics and hybrid system with the other dynamic control systems aboard. Proprietary algorithms deliver optimal integration of all the various systems, automatically and often without the driver even noticing. In cornering, for instance, the HY-KERS keeps the V12’s revs high to guarantee better acceleration on exit.

The brakes are from Brembo and are composed of a special carbon-ceramic material. They are housed within 19-inch wheels up front and 20-inch wheels at the rear. The tires are Pirelli P Zeros that measure up to 345/30 at the rear. Also aiding the handling are magnetorheological-type dampers, an electronic differential and Ferrari’s F1-Trac stability and traction control.

Production run of only 499 cars

A very advanced and uncompromising approach was also taken for the interior, which features an interface inspired by F1 single-seaters. The seat is fixed and tailored to the driver while both the pedal box and steering wheel are adjustable. The driving position is similar to that of a single-seater and was designed after consultation with the Scuderia Ferrari drivers Fernando Alonso and Felipe Massa, who played an active role throughout the entire development process.

Only 499 examples of the LaFerrari are scheduled to be produced, and all are almost certainly accounted for.