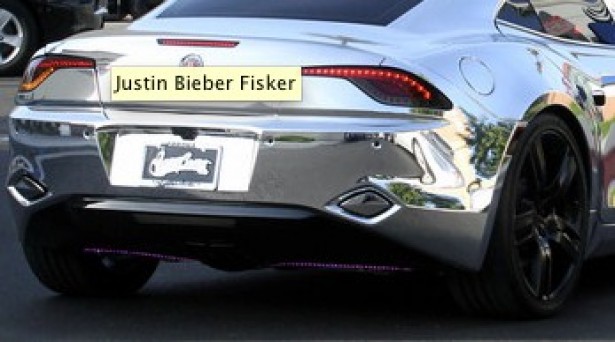 He's sold millions of records, and has almost 20 million followers on Twitter. This would normally be great news for any carmaker whose car he drove, hopefully leading to a few extra sales by association.

Unfortunately for Fisker, all Justin's fans are 13 years old, and aren't really in the market for a $102,000 luxury hybrid sedan, not least one wrapped in chrome vinyl by West Coast Customs, as seen on GreenCarReports.

As you may remember (or perhaps you blocked it from memory), the pop star recently received the range-extended luxury car live on the Ellen Show, for his 18th birthday.

Not content with its stunning good looks and eco-friendly image, Justin has had some modifications carried out by the famous customizing crew.

The chrome wrap is most obvious, but you'll also spot the dark-tinted windows, black 22-inch custom wheels, and strips of LED lights under the chassis.

We reckon this is grounds to get the Taste Police involved, but ironically Justin had a run-in with the actual police shortly after picking up the car, when he parked it illegally outside some shops in Beverly Hills.

Let's hope for Bieber's sake he doesn't get into an accident in the mirror-finish Fisker, like he did when driving a Ferrari. Seven years back luck would give the star particularly bad Karma...