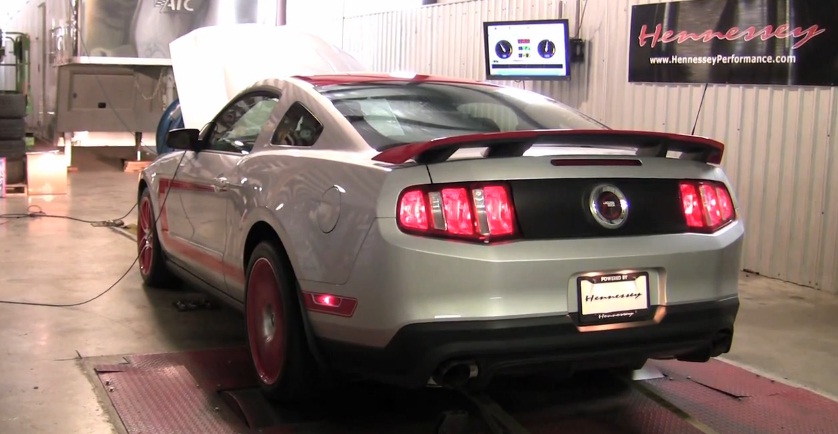 Nicolas Cage has nothing on John Hennessey.

Even if Cage's Gone in 60 Seconds character made swift work with the "Eleanor" Shelby Mustang, Hennessey makes a 2012 Ford Mustang Boss 302 Laguna Seca go a quarter mile in 10.9 seconds at 130 mph.

As much as we'd love to be track-side and bragging about this as a firsthand conquest, as you can see from the video below, it was all Hennessey--car modifications included.

Said modifications kick the standard car's 444 horsepower at 7,500 rpm to 700 horsepower at an even 7,000 rpm, and are summarized as the Hennessey HPE700 Supercharged Boss 302 Mustang.

No, really; that is a summarization.

Some highlights of the turnkey package include a TVS2300 supercharger, air-to-water intercooler, upgrades to exhaust, fuel and intake flow plus all the requisite calibration and tuning to make it drivable on 49/50ths of our states' streets (sorry, California).

Presuming owners won't just travel a quarter mile at a time, the slicks shown in the video aren't part of the deal. In fact, beyond a revised strut tower brace, Hennessey didn't fiddle with the tires or handling on the HPE700 at all. Considering the dialed-in feel of the Laguna Seca as-is, there was no need. There's also no need to run fancy fuel. Just like the car in the video, all HPE700s are said to deliver the goods on 93-octane fuel.

So if you desire to temporarily disrupt Earth's rotation with each hard launch, this boss of all Bosses would be a suitable starting point.