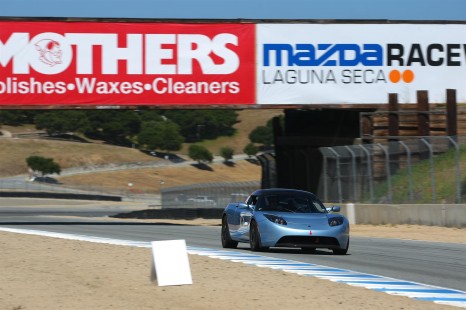 The ReFuel EV Track Day and SportElectric Time Trial were held at Laguna Seca last weekend, and a group of Tesla employees decided it would be a fun way to get to know each other better. What the others there, mostly owners of a range of electric cars, both production and home-built, didn't know was that Tesla had brought a ringer: Tesla user interface designer and former High Gear Media web designer Joe Nuxoll. We interviewed him to see what lapping the Roadster to victory was like.

Nuxoll is an experienced and talented driver, regularly instructing high-performance driving events at Laguna Seca and Infineon. To see just how good he is, you can visit his YouTube page, which is filled with videos of him driving his personal track machine, a 2008 Lotus Exige S, and even a few laps in a Radical SR3, which we've embedded below.

So what is the ReFuel EV Track Day and SportElectric TT about for Tesla, and why did so many Tesla employees and cars participate? According to Nuxoll, it was just a fun event and a way for the employees to get together and bond over their love of racing--Tesla itself has no interest or intent to get involved in motorsports--while having some fun on the track.

One thing both Nuxoll and Tesla communications head Camille Ricketts were very clear on, several times during the interview, was that typical owners should think twice before taking their car out on a track day--there could be warranty implications, as the extreme conditions cause heat build-up that could shorten the car's life.

Driving the Tesla Roadster to victory

But what about that 1:50.888 lap around Laguna in a first-generation Roadster? What was that like? Nuxoll walked us through the driving technique used to extract the best times from the car, and it sounds more like a Group B rally driver's skillset. Why? Because of the regenerative braking built-in to the Roadster.

Being a rear-wheel drive car, the Roadster's regenerative brakes work on the rear axle, sending power that would otherwise be wasted as heat in the friction brakes back into the pack to extend the car's range. That's a great feature on the street, but on the track, it's like having extra rearward brake bias, which isn't always a good thing for balance.

So, to work around the system, Nuxoll employed a highly non-standard method: entering the corners with the throttle still nearly pegged, using his left foot on the brakes. Because the Roadster doesn't need to shift, he didn't have to worry about heel-and-toeing his way into the corners. Instead, he was manipulating the car's computer into staying out of regenerative braking to keep the car balanced. The regenerative braking did turn out to be useful in some areas, allowing Nuxoll to rotate the car with a simple lift of the accelerator.

The rest of the lap was a lot like driving any other car, except the Roadster's high torque, lack of gears, and Lotus-designed and built chassis, which all worked together to make the Roadster surprisingly quick. As Nuxoll said, "It was fantastic. It would just accelerate as needed coming out of every corner."

If you doubt Joe's word due to his employment by Tesla, consider this: prior to working there (and since) Nuxoll has used his Exige S to consistently turn 1:43-1:44 laps at Laguna--very quick times. In other words, he knows what he's doing and what he's talking about. The Roadster got within six seconds of those times--and it was completely stock, right down to the tires.

You can find the full results of the time trial and lapping sessions here.

A few caveats for the electric track enthusiast

There are a few things holding the Roadster back from being a great track car, however. Since it was designed for the street, Tesla didn't fit the Power Electronics Module (PEM) that controls the electric motor, or the motor itself, with active liquid cooling systems--they would have added unneeded complexity, weight, and cost. For the track, however, just as with combustion-powered cars, heat management is a must. Just as traditional race cars have extra ducting, larger radiators, oil coolers, etc., so too would the Roadster need to have its cooling systems upgraded for the stresses of regular track use. 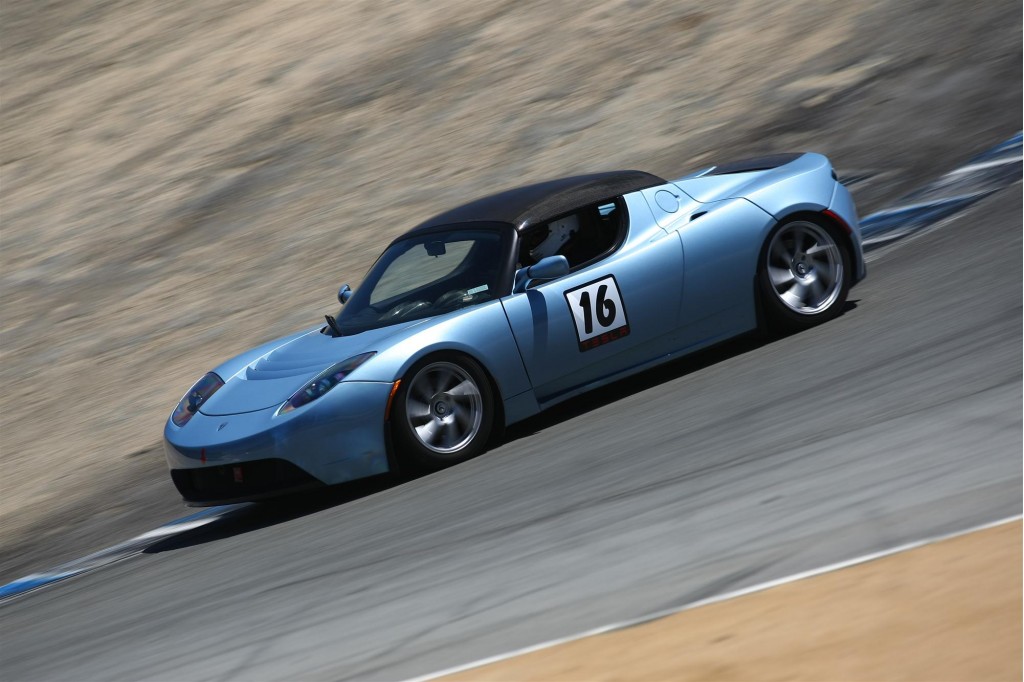 One other element that would probably have been tweaked if the Roadster had been designed for track use is the center of gravity height. Being about 700 pounds heavier than his track-day Exige S, with most of the difference in weight mounted somewhat higher, the Roadster exhibited more body roll at the limit. With the rear-biased weight distribution, the combination made Nuxoll expect a lot of understeer, but he managed it through judicious use of the "virtual e-brake" provided by the regenerative braking system.

That said, the experience prompted Nuxoll to tell us that he "is looking forward to all-out electric race cars." In addition to the Roadsters and other production cars on track, Kleenspeed brought out its purpose-built Le Mans Prototype-style all-electric race car. When Nuxoll asked if he could drive it, the owner told him, "Anyone can drive it as long as they bring a $2 million check."

We asked Nuxoll what kind of range the Roadster got on the track, but because the car was being driven by others as well, and stuck on the charger in between runs, he couldn't get a clear read. He did say he thought it was about the same ratio as his Exige S, which though rated at 26 mpg on the highway, gets under 5 mpg on track. If you ask a car--any car--to give its all, don't expect to get hundreds of miles out of the tank, whether it's filled with electrons or gasoline.

It would also be a frustrating experience, says Nuxoll, "because it would need to cool down after just a few laps."

Nuxoll says that with a full track-day setup, he thinks the Roadster could get down to the same times as his Exige S. That, together with Nuxoll's explanation of the Roadster's on-track dynamics, makes us look forward to the arrival of real all-electric race cars, too. The future of motorsports, and our own amateur on-track fun, doesn't look so bleak now, does it?