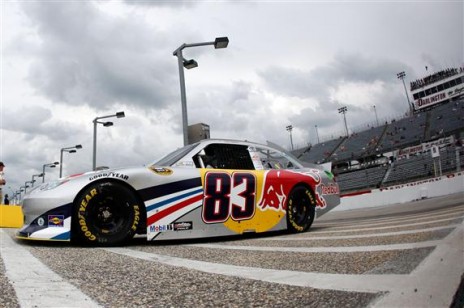 Although Nationwide Series qualifying was rained out yesterday, the Sprint Cup cars did get to put in their fast laps to determine the lineup for the Showtime Southern 500, and the top three runners came out a small notch ahead, all clearing 180 mph average speed.

Kasey Kahne lead the way with a blistering 181.254, almost 1 mph faster than the previous qualifying record set by Jamie McMurray at 180.370 mph in 2010. Ryan Newman likewise beat the previous record with his second-place qualifying run at 180.429 and Denny Hamlin was close at 180.132. Marcos Ambrose, former Australian V8 Supercar driver and a road course ringer, showed well on the unusual oval, qualifying sixth at a speed of 179.671.

Despite the fast pace of the front-running qualifiers, there are many more drivers--some further down the lineup--that still hold a shot at doing well in the race. Kyle Busch, for example, starts the race tonight in 14th, but his win last night in the Nationwide Series Royal Purple 200 proves he knows how to hustle around the track, though he did start that race from the head of the front row after qualifying was rained out and the starting order was set by practice times.

Andy Lally, a long-time road racer and recent crossover to Sprint Cup competition, failed to qualify for the 43-car field, though he was the fastest rookie to take to the track. Lally apologized to his fans via Twitter just after the close of qualifying, saying, "I'm sorry. I tried. We were just to[o] tight. This feeling is horrible but I'll try to figure out something to learn from it for the future.

The race kicks off this evening at 7:30 p.m. Eastern time.