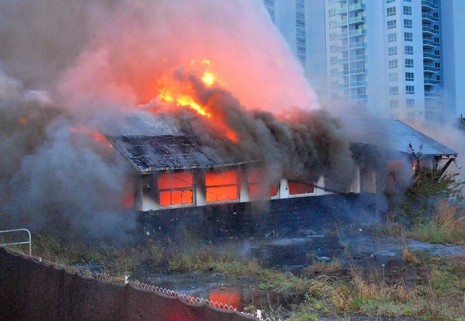 NASCAR legend and perhaps the best-liked, most-referenced cheater in motorsports history, Smokey Yunick, used to run a shop called the Best Damn Garage In Town, and last night, the building that housed it until it was shuttered burned to the ground in Daytona Beach, Florida.

Even after its closing, Yunick's shop was a sort of point of pilgrimage for the NASCAR faithful, a visible landmark in the history of the sport and a reminder of the man whose iconic presence helped define it. It also once served as the office for Carbon Press, the company that publishes Yunick's autobiography. The garage had been abandoned in recent years, with little in it beyond old tires.

In addition to being a force behind NASCAR, Yunick was also a force in automotive design, coming up with a variable-ratio power steering system and an extended-tip spark plug design that is still used today.

The garage first opened in 1947 and ran until 1987, when he closed it on the grounds that there were no more good mechanics. Yunick died in 2001.