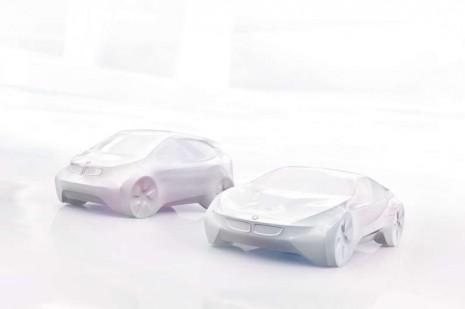 BMW is jumping into the green mobility movement with both feet with the creation of a new sub-brand: BMW i. Under the banner "Born Electric," BMW will begin selling two new cars, the i3 and i8, in 2013, both of which put an emphasis on "sustainable premium mobility. "

The BMW i3 was previously known as the "Megacity" vehicle. A pure electric, it's designed for urban areas where long range isn't as much of a factor. The i8, on the other hand, is a plug-in hybrid based on the BMW Vision EfficientDynamics concept vehicle. BMW says that it will combine high-performance with the fuel economy of a much smaller car.

Both cars are built using an innovative new construction technique. Known as a LifeDrive architecture, it uses an aluminum chassis for the engine and transmission, but a carbon fiber reinforced plastic (CFRP) passenger cell. BMW says that the extensive use of aluminum and CFRP cancels out the additional weight caused by the battery packs in these two vehicles, not only keeping the vehicles lightweight, but also improving electric-only operation. Both the i3 and i8 will be built at BMW's Leipzig facility for a 2013 on-sale date.

In addition to the cars built under the BMW i brand, the company will be rolling out a series of "mobility services," navigation, route planning, car sharing and other apps that BMW says will help make life easier in cities. The interesting thing is that the mobility services will be offered independently of the cars themselves. One of the first is BMW i's collaboration with the My City Way mobile app, which provides users with info on parking availability, public transportation and local entertainment. BMW has taken a stake in the company through BMW i Ventures, a venture capital group formed by BMW that will invest in companies that it feels fits within the BMW i philosophy.

So far nothing more than a couple of highly stylized sketches and models are available of the new cars themselves. However, it will be interesting to see the reaction to BMW's new sub-brand, and if separating out the greenest of BMW's lineup pays off in the long run.