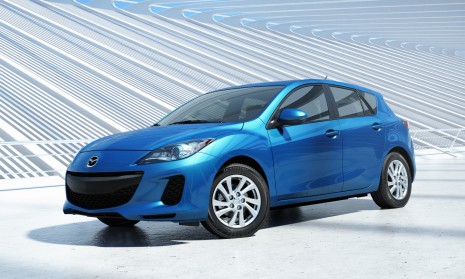 Mazda's Sky-G line of engines was revealed back in September of 2009, but today, we get one of the first announced cars with the technology: the 2012 Mazda3 with somewhat differently-named SkyActiv G engine and transmission.

So what's all this talk about sky? It's because the new engine cuts fuel use and emissions by about 30 percent thanks to direct injection and other tweaks that optimize the combustion cycle. The transmission comes into the picture to utilize the higher torque at lower rpms produced by the engine.

Oddly enough, the new SkyActiv Mazda3 is making its debut at the 2011 Canadian International Auto Show. The upgraded 2012 Mazda3 will be available later this year.

In addition to the advanced engine and transmission tech, the 2012 Mazda3 gets revised front and rear looks, a new grille, and newly-styled 16- and 17-inch alloy wheels.