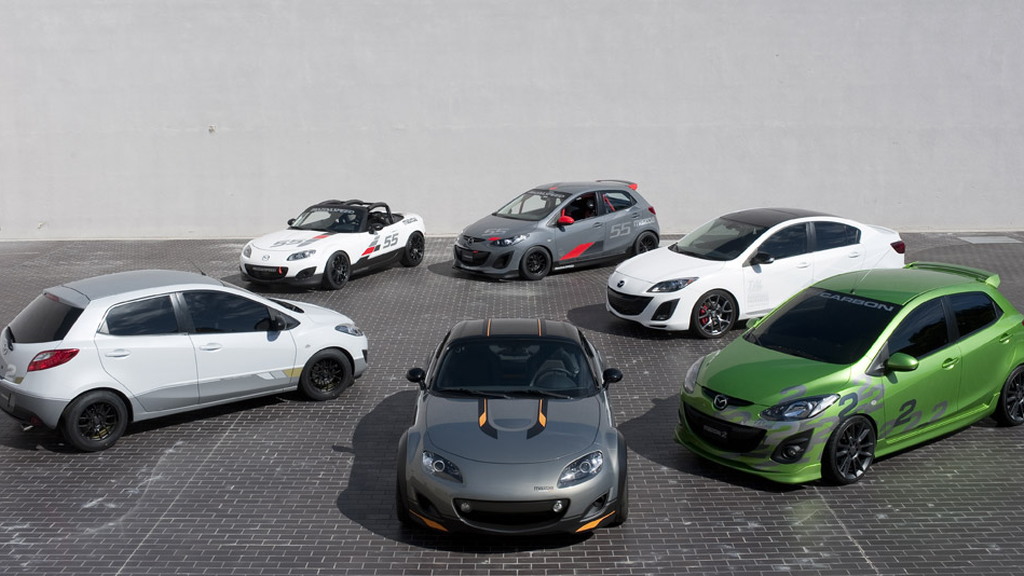 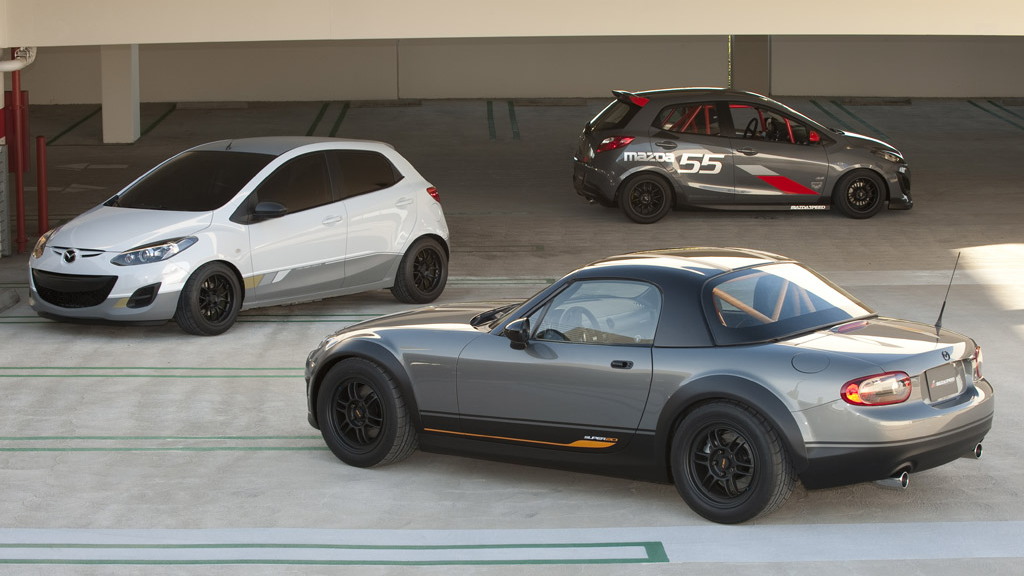 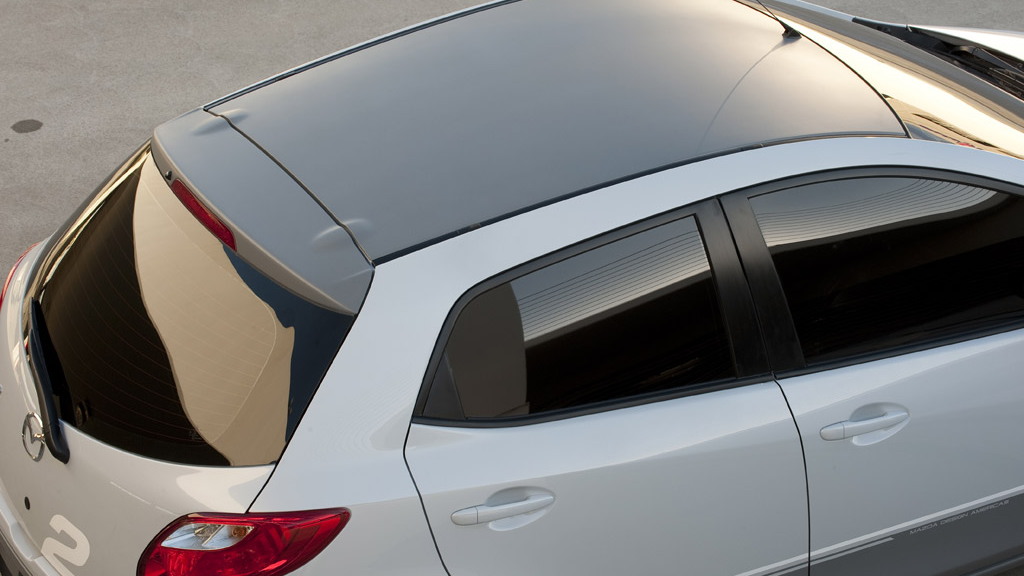 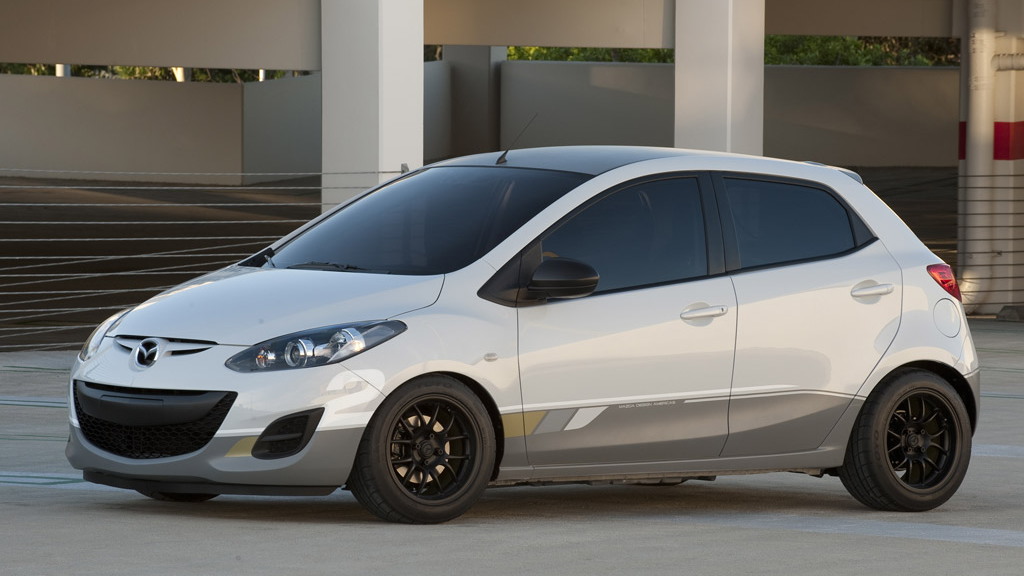 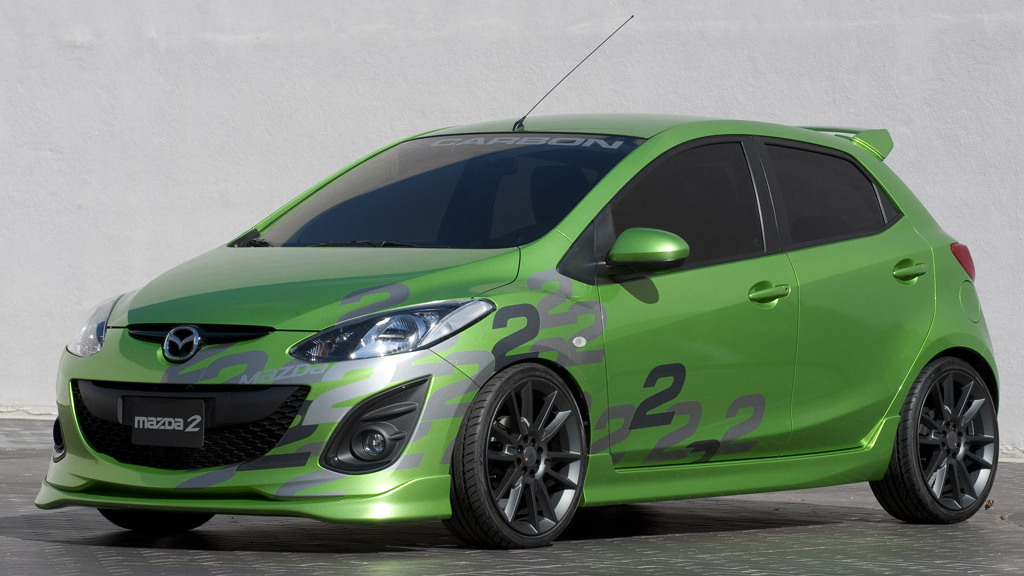 9
photos
Mazda is taking its “zoom zoom” philosophy to a whole new level at the 2010 Specialty Equipment Market Association (SEMA) show, which is taking place in Las Vegas this week. Mazda’s product lineup of sedans, sports cars and crossovers already offer consumers plenty of thrills in stock form but at SEMA we get to see the automaker’s aftermarket capability and potential.

Taking center stage is the funky new 2011 Mazda2, which is on display in two very different flavors: the Mazda2 Evil Track and Mazda2 Street. They are joined by a hardcore racing version of the Mazda MX-5 roadster and the MX-5 Cup Car, the latter being the most road-raced car in the world. Some of the modifications for the track inspired MX-5 include a supercharged Cosworth engine, a hard-top roof in place of the convertible soft-top and a stripped out the interior to accommodate a full roll cage.

Also on show are two different Mazda3 sedans, as well as the Grand-Am GT Mazda RX-8. The SpeedSource Grand Am GT Mazda RX-8 is based on a tube-frame chassis jointly developed by SpeedSource and Riley Technologies, and powered by Mazda's three-rotor 20B Renesis rotary engine--a significantly more powerful unit than the smaller 13B engine used in the regular RX-8 sports car.

Hit page two to get a complete run down of each car.

MX-5 Super20
Celebrating its 20th anniversary, the MX-5 has been re-imagined with a darker, edgier attitude in the MX5 Super20. It’s a purposeful combination of street-tough style and motorsports-inspired attributes.  This third generation vehicle acknowledges the iconic first-gen iteration with modifications such as a supercharged Cosworth engine, small diameter wheels, more substantial tire profile and wider fenders.

A hardtop has replaced the soft-top and the interior stripped down and fitted with a roll-bar lending a GT-inspired look and feel. The seats have suede seat inserts and channel stitching, providing improved grip for the driver.  Orange contrast stitching highlights the sporty seat profile as well as providing a polished look throughout, coordinating with the exterior graphic treatment which plays off the black and Storm Gray exterior.

MAZDA3 Turbo Sedan
A small team of designers and engineers at Mazda R&D in Irvine, Calif., decided to have a little fun with a MAZDA3.  The team took its knowledge of the Mazda parts bin and its close relationships with MAZDASPEED Motorsports suppliers, looked in the mirror, and decided to build a tuner car that shows its own vision of the MAZDA3.

The car is painted to mimic the MAZDA3 Time Attack race car, but in a more subdued Crystal White Pearl base coat with soft gray tone graphics.  The scheme is a modern twist on the famous Renown graphics used on the Mazda 787B that won Le Mans in 1991.  Exterior details, including grille inserts, side mirrors, fog lamp bezels, the roof panel, and the formerly chrome interior of the front lamps are all given a bright black paint treatment.  Combined with tinted windows, and dark red taillight lenses, the dark details tighten the car visually, emphasizing the MAZDA3's taught, muscular shape much like a tailored black suit on an athlete.  Wheels are forged aluminum 19x8-inch with 225/40-19 Bridgestone Potenza RE050A tires straight off the RX-8 R3.

The sedan was sent to Tri-Point Engineering for a boost in power, so they installed a turbo kit utilizing a rugged cast iron turbo manifold feeding a high-efficiency Garrett GT2871R ball bearing turbo. At a mild 10 psi of boost, the 2.5-liter MZR engine is making well over 250 horsepower at the wheels.  To handle this extra power, the front brakes were replaced with rotors and calipers from a MAZDASPEED3, while the rear rotors and calipers were sourced from a MAZDA5.  Double-adjustable coil-overs from KW Suspension, paired with a Tri-Point adjustable rear stabilizer bar bring the handling back into harmony with the engine's higher output.

Grand-Am GT Mazda RX-8
The SpeedSource Grand Am GT Mazda RX-8 is based on a tube-frame chassis jointly developed by SpeedSource and Riley Technologies, and powered by Mazda's three-rotor 20B Renesis rotary engine.  The 20B three-rotor engine is the cornerstone of Mazda's Grand Am GT RX-8 program, and based on the engine used in the RX-8 street car.  With its compact size and light weight, the rotary engine brings with it a vast history in sprint and endurance racing.  Revving to over 9,000 rpm, the distinctive 20B rotary engine sounds like no other engine on the Grand Am ROLEX GT grid.

The Mazda RX-8 dominated the 2010 Grand-AM GT season winning six of 12 races, and winning the drivers, team, and manufacturers championship.

MX-5 Cup Car
The most road-raced car in the world -- as well as being the best-selling two-seat roadster in the world – the MX-5 Miata is no stranger to the track.  The MX-5 Cup is a series that pits similarly modified MX-5s together on the track.  The MX-5 Cup car weighs just under 2,600 pounds and features an authoritative 195-horsepower motor.  The series was launched in 2006 and has since enjoyed strong fields and close competition.

Chassis Modifications: The only modification is the addition of the 3-piece front strut tower brace that comes with the sport package.

Transmission/Final Drive Modifications: The stock six-speed gearbox is used by all cars.

Wheels: All cars run their choice of the stock alloy 17x7” wheels available on MX-5 Miatas.

Safety Modifications: All MX-5 Cup cars run with full safety equipment, including an eight-point rollcage that must be welded into the car.  Other safety equipment includes a racing seat, head/neck restraint, an electrical shut-off switch and an incorporated fire-extinguishing system.