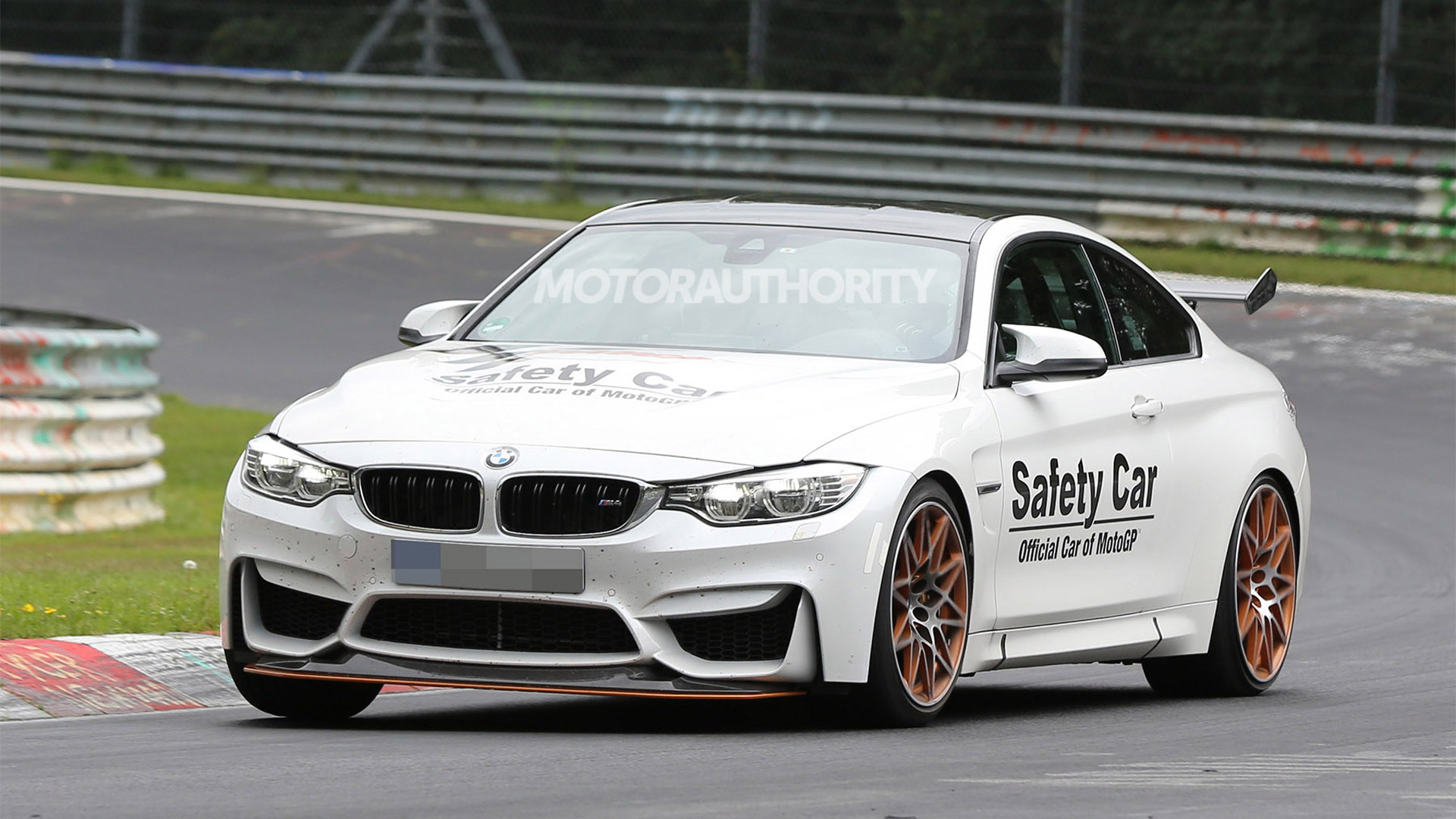 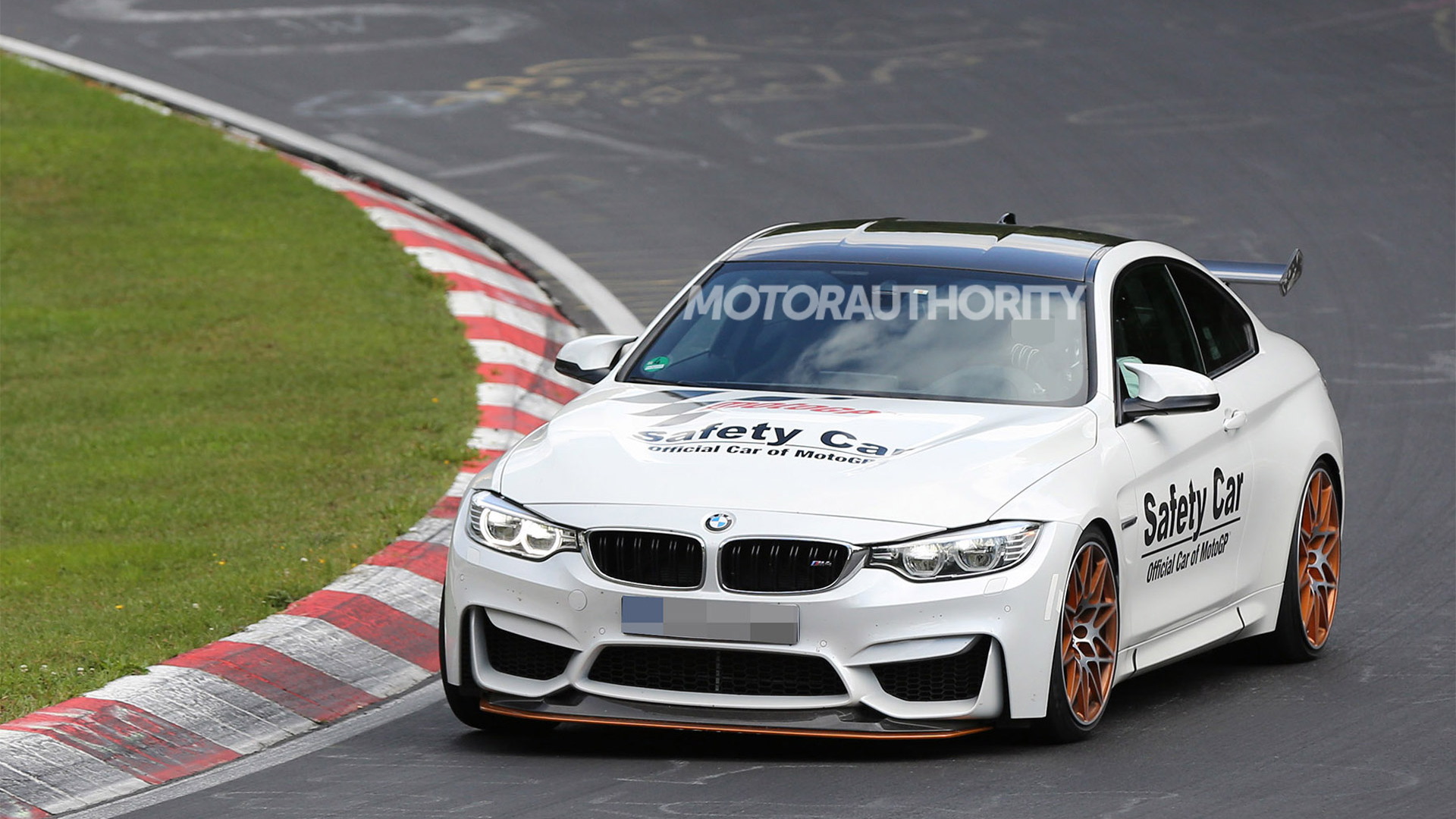 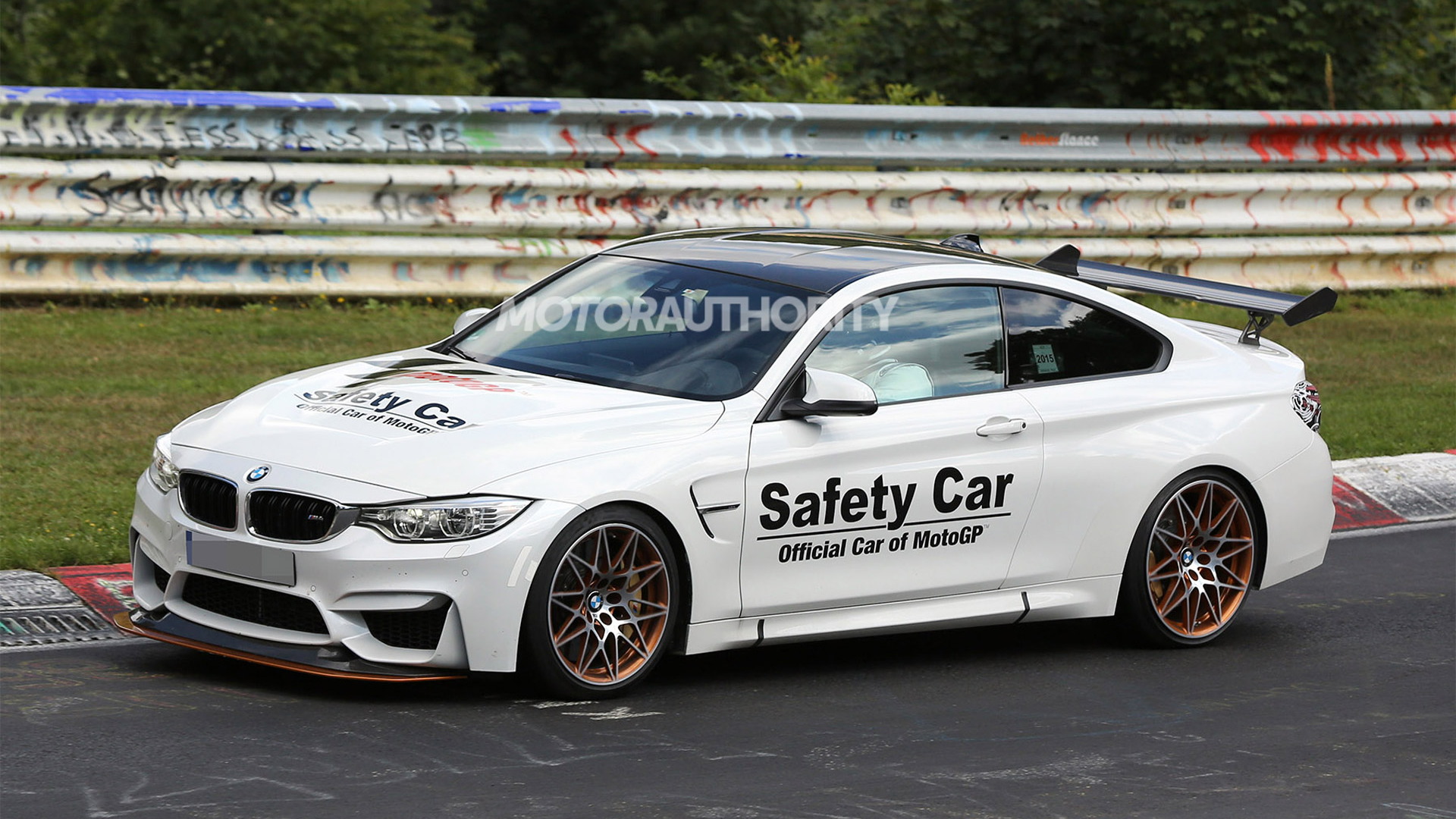 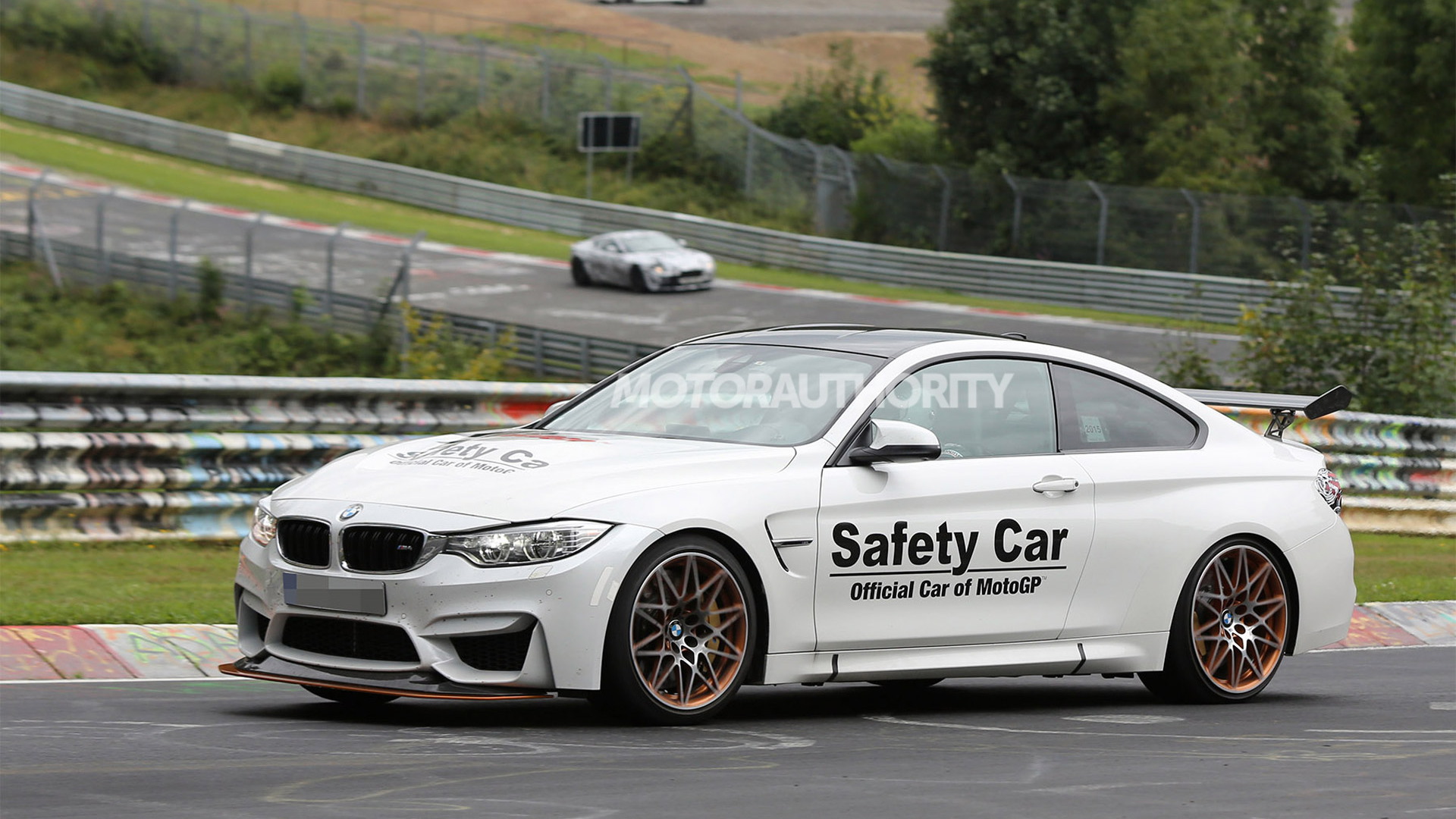 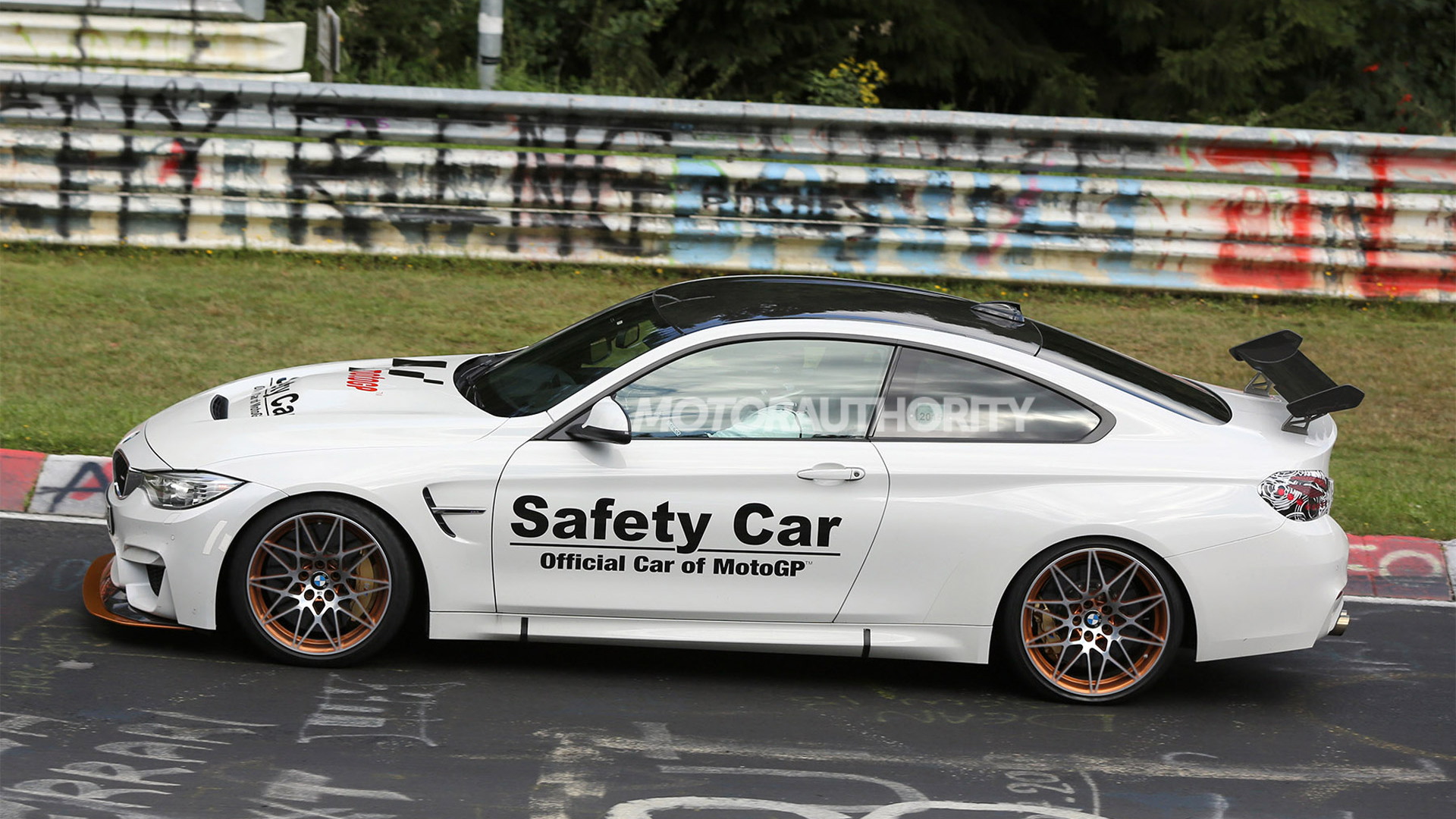 Less than a week after it was previewed in concept form in Monterey, BMW’s upcoming M4 GTS has been spotted testing at the Nürburgring and on some of the German race track’s surrounding roads. The standard M4 only went on sale last year but this new, more hardcore version is coming soon. We expect it in showrooms early next year, either as a 2016 or 2017 model.

The latest prototype is still wearing the obvious markings of the M4 safety car currently used in MotoGP, but this is just a decoy to fool onlookers. You’ll notice the car is also wearing a number of elements shown on the M4 GTS concept, including the extended lip spoiler and light alloy wheels dressed with bright orange accents. The final version should feature staggered wheels measuring 19 inches up front and 20 inches in the rear.

Additional elements we can spot on the prototype are the large rear wing, modified front bumper and uprated brake package. It also appears the car has a more aggressive suspension tune than the standard M4, and if you look closely you’ll notice BMW’s new OLED tail-lights.

Under the hood will be the M4’s twin-turbocharged 3.0-liter straight-six, though the engine will be enhanced by a new water-injection system that should not only boost output but also improve efficiency. Expect a 10 percent bump in power over the standard M4’s 425-horsepower rating. The standard motor’s 406 pound-feet of torque should also be increased.

Unfortunately, we still don’t know how many examples are earmarked for the United States or how much they’ll cost. The previous M3 GTS, which was never sold here, cost approximately three times as much as the standard M3 coupe on which it was based. We doubt that will be the case for the M4 GTS as it is expected to be built in higher volumes. The standard M4 is currently priced from $65,125 with shipping.