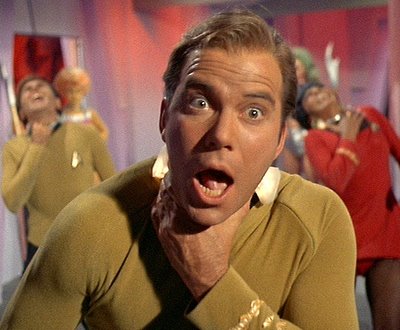 William Shatner was not always the hep-cat daddy-o he is today. Sure, he was a hot property in the 1960s, during the original run of Star Trek, but then the series was canceled, and there was that "Rocket Man" thing, and the $20,000 Pyramid, and before you knew it -- bam -- Shatner was the Erkel of his generation. (We could've made some very graphic puns on his last name to drive the point home, but you know: it's Monday. Plus, we hear Mr. Shatner is a very, very nice guy.)

Shatner's comeback was slow, and probably had something to do with his role in the popular-though-cultish Star Trek films, his gig as the spokesman for Priceline, and his seemingly endless ability to laugh at himself. Today, the Canadian-born actor is in high demand, meaning that he's a celebrity again, meaning that like every other celebrity on Planet Earth except maybe Shia LaBeouf, the guy has a Twitter account. (It's @WilliamShatner, if you're interested).

A couple of months ago, a propos of nothing, Shatner began tweeting out a top ten list of his favorite cars. And can we be perfectly honest? It was a little disappointing and not nearly as kooky as we might've expected from a man known to romance women in green body paint before a national audience.

Admittedly, there are a few good items on the list. The Citroen 2CV? Perfect. The Chevrolet Corvair? Very period, very cool, very Young Shatner. But putting the Bugatti Veyron in the #1 spot? C'mon man, that's for 12-year-olds and chumps like Jeremy Clarkson. We're talking about badass William Shatner! What about the GM Runabout? The Chevrolet Mako Shark II? And how could he forget the Ford Nucleon concept? It was nuclear-powered! People loved that in the 60s. But maybe he smoked a little too much Rocket Man to remember.

Mr. Shatner, if you're reading this: may we suggest tweeting out another round of rides -- maybe one that pairs your risk-taking sensibilities with your love of quirk and camp? Hell, somebody's got to give the Dodge Deora a little love, and it might as well be you.