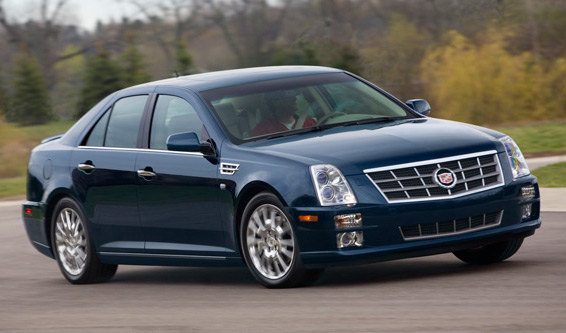 The DTS/STS replacement has had a rocky road through GM's restructuring process.

Rumors about what Cadillac is planning for its next-generation flagship sedan have been flying around the web for years now. Guesses have ranged from a Zeta-based vehicle sharing Pontiac G8 heritage to the most recent reports of a still-murky XTS-badged AWD sedan. This week, a new report confirms the program to build a new flagship Caddy is back underway.

The range-topping Cadillac had been derailed by the financial crisis and then the bankruptcy General Motors has so famously dealt with over the last year, but now that the New GM is running the show, the DTS/STS replacement is go.

The report indicates that the Zeta-based solution won't be used, however, and that instead the new flagship will ride on a modified version of the Epsilon II platform found in the 2010 Buick LaCrosse. According to GM insiders, the usually FWD Epsilon II platform will be made wider and longer and converted to AWD.

The car is part of a new strategy for Cadillac that is similar to BMW's three-car lineup of small, medium and large. The CTS would be the medium-sized car, and a new small Cadillac also is expected in 2011.

Whatever is to come of the top-end Cadillac model, however, don't expect to see it on the road until very late in 2011, though it will likely make an auto show debut sometime before that. The plant where the car is expected to be built--GM's Oshawa, Ontario plant--isn't going to start on the XTS until December 2011.

Stay tuned as GM is expected to make several major product announcements later today. We'll keep you on top of the details as they break, but in the mean time, you can read up on our experience with the 2010 LaCrosse if you haven't already.