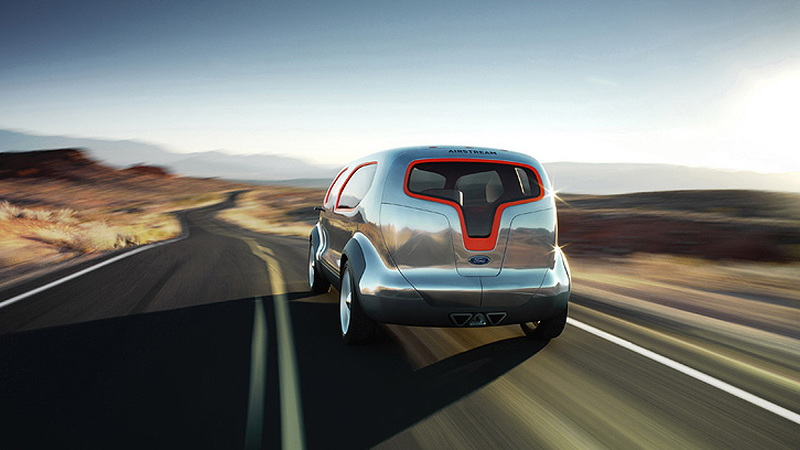 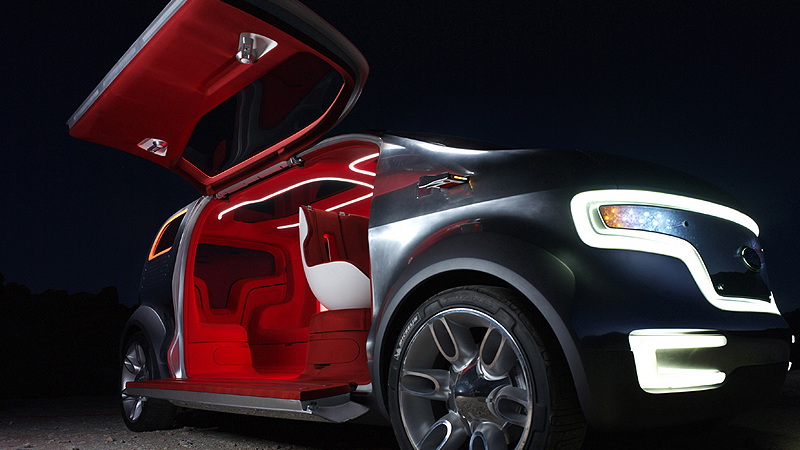 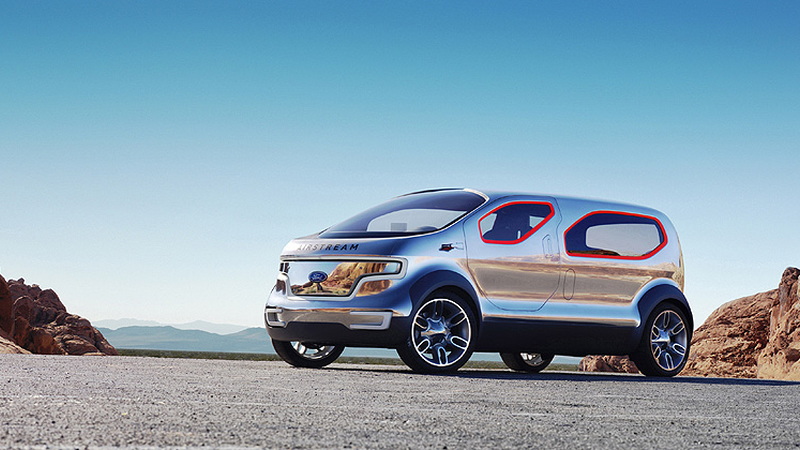 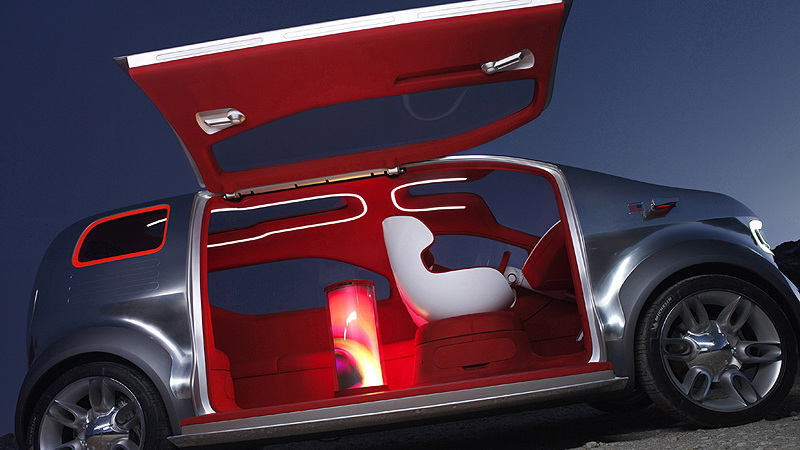 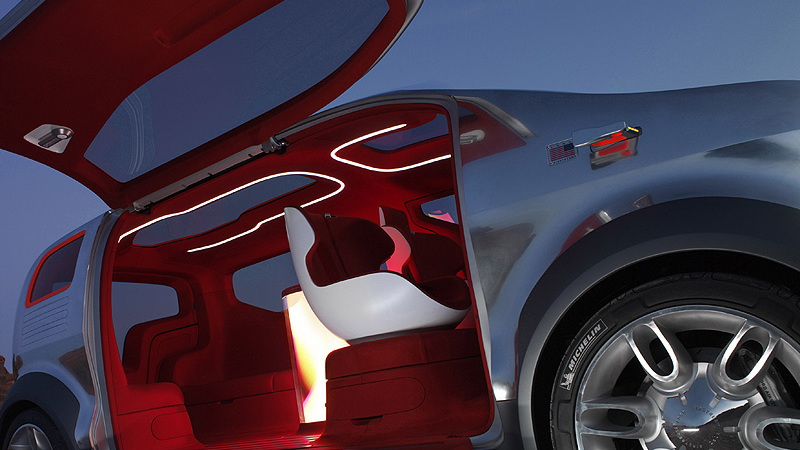 23
photos
Ford’s wacky Airstream concept car gives us a glimpse of what the future of motoring may hold. The concept showcases advanced design features such as the plug-in hydrogen hybrid fuel cell powertrain, floating instrument panel and dual-view information panels as well as new four-point safety belts. Passengers are also treated to pod-shaped swivelling captain's chairs that rotate so the driver and front-seat passenger can face each other. Housed in the rear is an entertainment lounge complete with a 360-degree screen for watching movies and playing games.

Ford has also managed to halve the weight and cost of fuel-cell technology, and its latest system can also operate in extremely cold temperatures unlike most of the current range of fuel-cells.

The Airstream Concept is in line with the move towards crossover style vehicles, a segment that’s expected to hit 3 million units by the end of the decade in the US.

Click ahead for our full gallery and press release.

Expanding the future of crossovers

Playing to win in the growing crossover segment, Ford has partnered with another iconic company to showcase how it could further expand its lineup of expressive crossovers.

The Ford Airstream Concept is influenced by Airstream's iconic design and the optimism for the future that Stanley Kubrick captured in his 1960s cult film 2001: A Space Odyssey.

The concept is powered by a plug-in hydrogen hybrid fuel cell drivetrain that operates under electric power at all times. This advanced fuel cell system is half the weight and cost of today's fuel cells and can operate in the dead of winter. That's a major step forward because today's fuel cells don't do well when the mercury dips below freezing.

Crossovers are at the intersection of trends in the economy and society and have been brewing for years. Couples are starting families later in life, while baby boomers are downsizing their lives and their vehicles. Fuel prices and intense competition are influencing vehicle choices as well.

The crossover segment is expected to hit 3 million units by the end of the decade, vying to be the largest U.S. vehicle segment.

Bold designs will allow Ford to reach the customers in this competitive and fragmenting segment that already includes Ford Freestyle, Ford Edge and, in time, the full-size crossover based on the Fairlane concept.

The Ford Airstream Concept captures the sense of optimism and adventure conveyed in American aircraft and spacecraft, right down to its organic, fuselage-inspired form language, the Ford-first unique reflective paint and 12 ceremonial rivets, which pay homage to Airstream's iconic construction.

The concept's bold, futuristic front-end explores a new look for Ford, encapsulating the single-surface grille and headlamps into the same graphic.

Each of the concept's bold orange-trimmed window graphics is a unique shape, reflecting the purpose of the vehicle: looking out and remembering that the journey – not the destination – matters most.

The Ford Airstream Concept's doors are asymmetric as well, allowing for easy loading of passengers and cargo. In addition to the driver's side hatch, the passenger side features a power clamshell door that runs two-thirds the length of the vehicle. A three-door hatch finishes the rear of the crossover.

The futuristic theme carries through to the interior, as well.

Ford Airstream Concept is a futuristic crossover capturing the sense of optimism and adventure conveyed in American aircraft and spacecraft.

In the rear, lounge-like seating is sculptural, creating a continuous cocoon-like environment wrapped in bold red B&B Italia fabric. The focal point of the rear seating area is a 360-degree screen for entertainment and games.

The unique screen not only creates ambient mood settings including a modern lava lamp and virtual fire, but it also is an entertainment source featuring games and a live camera feed.

Safety belts remain the most important safety technology in vehicles.

One of Ford's possible next-generation safety belts incorporates a four-point "belt and suspenders" design in lieu of the familiar three-point safety belt, which is featured on the Ford Airstream Concept.

The rubber meets the road

The new plug-in hydrogen fuel cell featured in the Ford Airstream Concept is much more than a concept. It is already on the road and driving in a Ford Edge prototype, created by scientists and engineers at Ford's Research & Innovation Center with partial funding from the United States Department of Energy.

In this application, the fuel cell's sole function is to recharge the vehicle's lithium-ion battery pack as needed.This allows it to work like a portable generator, instead of an engine, as had been the case in previous Ford fuel cell vehicles. The new fuel cell, supplied by Ford partner Ballard, operates in a steady state, allowing a significantly smaller, less expensive fuel cell and drastically improving the durability of the fuel cell. With this system, the fuel cell delivers the power needed to recharge the lithium-ion batteries, rather than to be the primary power source to drive the wheels, as in a typical fuel cell-powered vehicle.

On the heels of Airstream's 75th birthday, Ford and Airstream have teamed up to deliver a futuristic crossover concept that could be used to navigate America's highways and byways.

Much like Ford, Airstream began because of one man's vision.

These specifications are preliminary and subject to change.