Porsche is launching a special edition version of the Cayman S labeled the ‘Porsche Design Edition 1.’ The new car, which goes on sale in November, was created to signify the work done at Porsche Design and mark the 35th anniversary of the original Chronograph 1s designed by Ferdinand Porsche.

The limited edition model is available in a minimalist and designer chic black paint scheme and is offset by a set of 19in alloys lifted from the 911 Turbo. The black theme carries over into the interior, which gets black leather and Alcantara upholstery, unique instrument dials and Porsche logos embossed on the headrests.

Mechanical changes consist of a lowering kit, which drops the coupe 10mm, as well as the latest Porsche Active Suspension Management (PASM) system with a special Sport mode that hardens up the suspension.

The car also comes with a special equipment kit, including a briefcase with a Flat Six Chronograph, pocket knife, sunglasses and pen, all finished in the same black as the vehicle’s exterior. There will only be 777 cars built, each with its own unique badging. 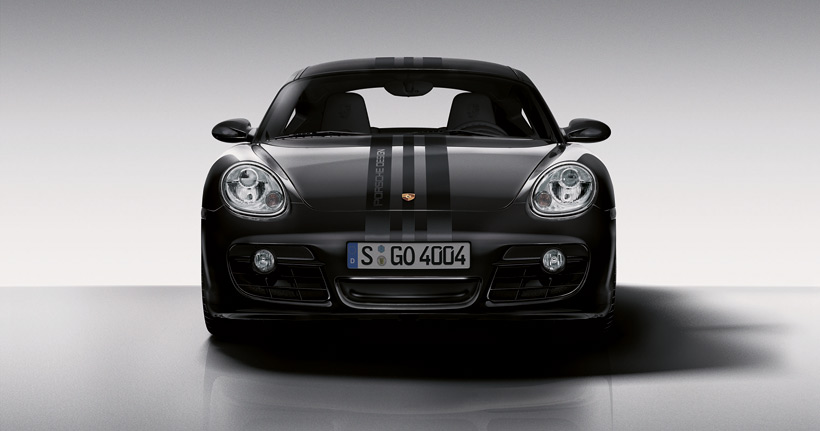 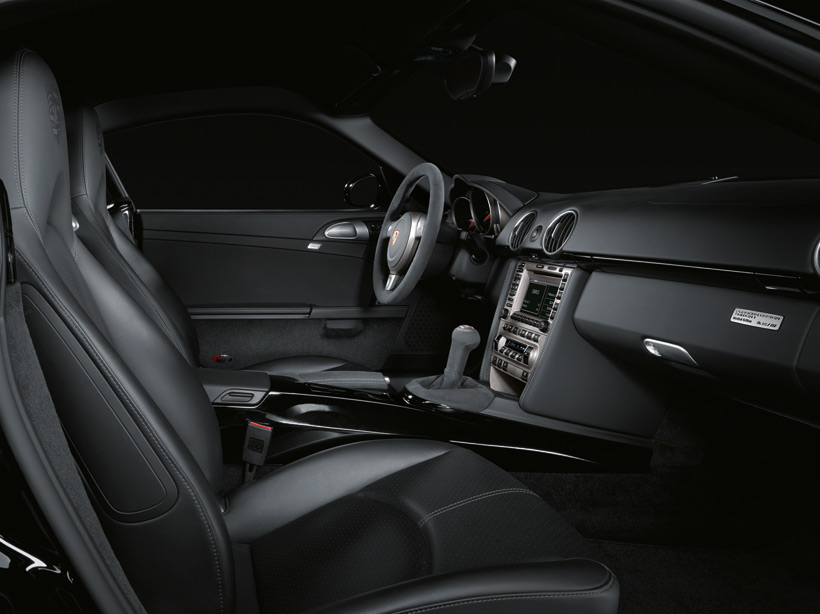 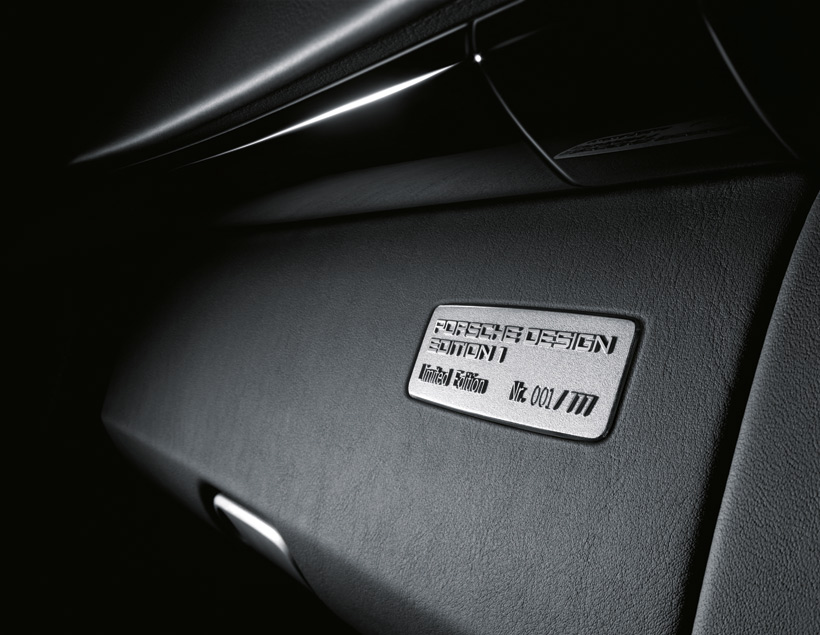 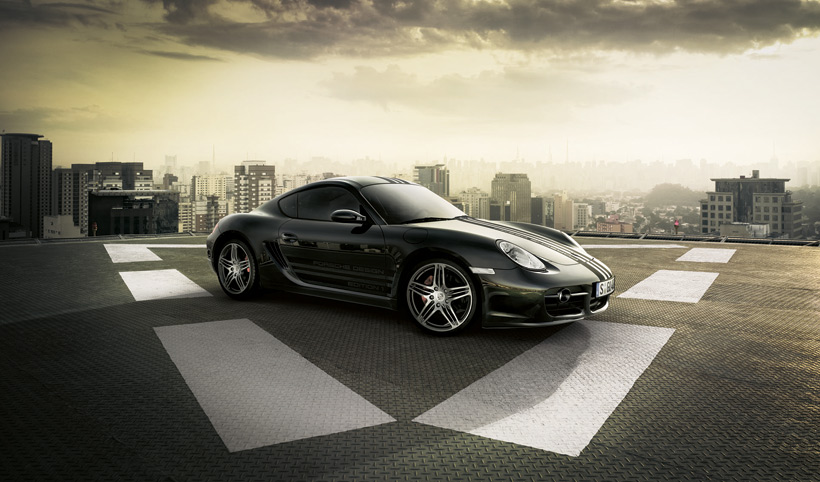 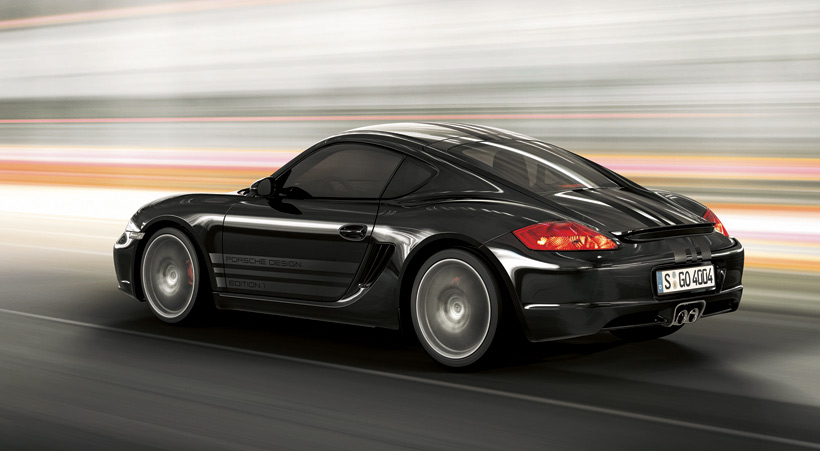 Stuttgart. Dr. Ing. h. c. F. Porsche AG of Stuttgart, Germany, is to expand its mid-engine coupé model range with the launch, in November 2007, of the Cayman S “Porsche Design Edition 1”, a limited-edition special series. Porsche has incorporated various design disciplines into this very special mid-engine coupé: the black exterior emphasizes the purist nature of the 295-bhp sports car and, at the same time, is a nod to Porsche Design and the famous Chronograph 1s designed by Ferdinand Alexander Porsche precisely 35 years previously.

This look, cultivated by Porsche Design, imparts additional luxury and class on the Cayman S: the black leather and Alcantara upholstery harmonizes with refined details such as the instrument dials, the layout of which reflects that of all Porsche Design chronographs. Even the center console, dashboard, and door trims glisten in black, while the three-spoke sports steering wheel, the gear lever, the handbrake grip, and the roof lining are clothed in non-slip black Alcantara. The Porsche logo (crest) is embossed on the headrests.

The vehicle’s technical features are equally sophisticated: beneath the ten-millimeter-lower body, standard Porsche Active Suspension Management (PASM) actively controls the hardness of the shock absorbers and it features a special Sport mode that can be activated at the touch of a button for a really dynamic driving feel. Five-millimeter spacers together with 19-inch turbo wheels give the Cayman S “Porsche Design Edition 1” a presence that is reinforced yet further by the 235/35 ZR 19 tires at the front axle and the 265/35 ZR 19 tires at the rear.

The Cayman S “Porsche Design Edition 1” standard equipment thus includes an elegant briefcase containing the Flat Six Chronograph, a pocket knife, a pair of sunglasses, a pen, and a key ring – all in black, even the knife blade, in keeping with the vehicle’s styling. The number of Cayman S “Porsche Design Edition 1” units is to be as exclusive as this series-production luxury package: only 777 are being built, and each will be identifiable from a badge on the lid of the glove box.

The market launch of this black Cayman with exclusive Porsche Design equipment, including briefcase, will begin in Germany in November 2007 and in the United States in January 2008. The base price is 58,600 Euros and, factoring in 19 percent value-added tax, the price in Germany will be 69,942 Euros.