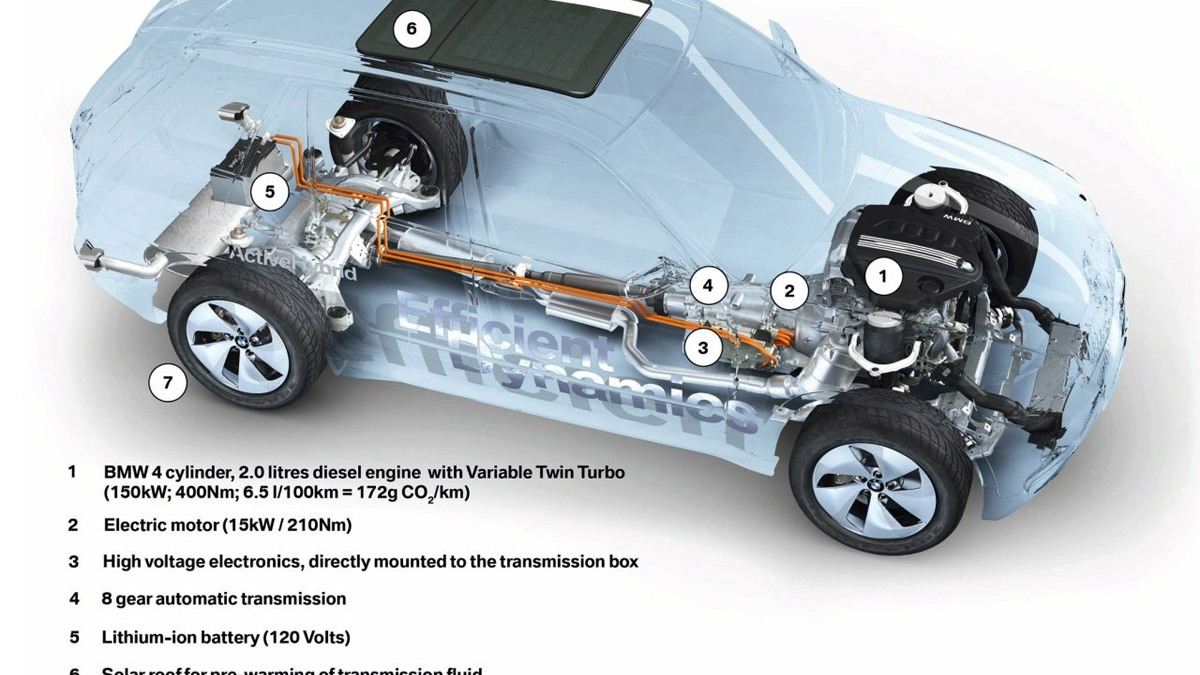 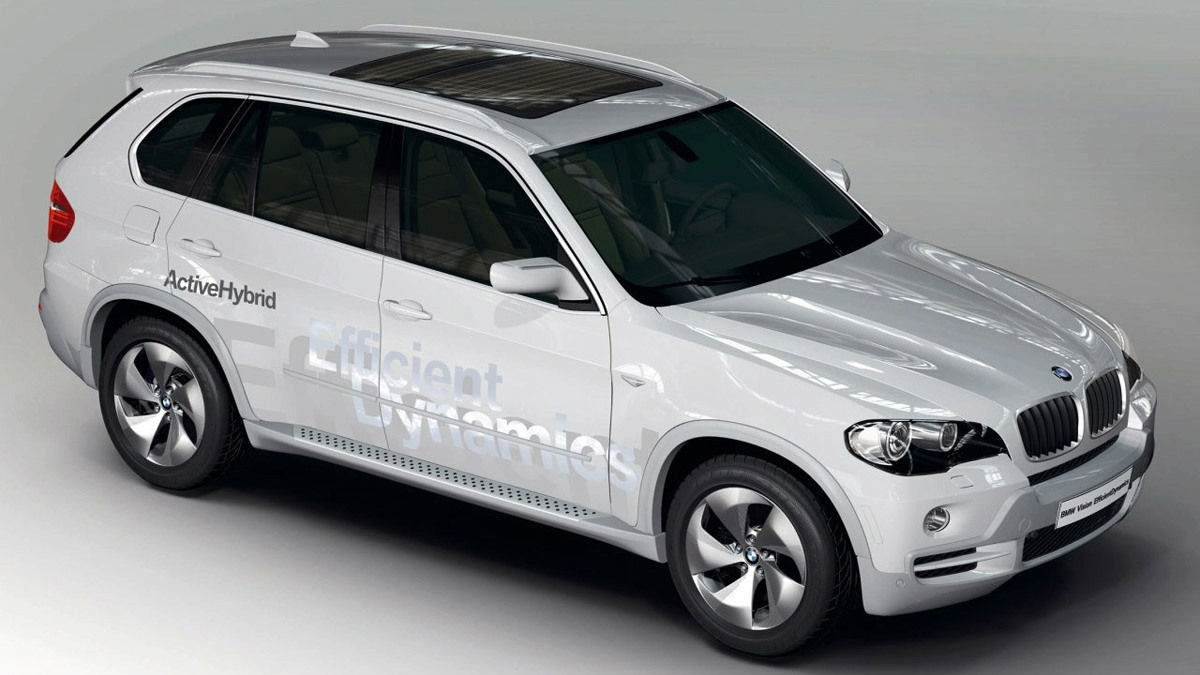 14
photos
As reported earlier BMW will be presenting a new eco-friendly concept touting the latest in EfficientDynamics technology at the upcoming Geneva Motor Show. BMW has given us a preview of the upcoming concept, a twin-turbo diesel X5 with a hybrid system. As has been the trend in Europe of late, carmakers are developing ultra-efficient hybrid models by combining frugal diesel engines with electric powertrains.

We’ve already seen Peugeot’s 308 diesel-hybrid concept and now we have a BMW X5 SUV fitted with a 2.0L turbodiesel and the carmaker’s mild ActiveHybrid technology plus an eight-speed automatic gearbox and even roof-mounted solar panels. All of these technologies combine to deliver the best fuel economy and lowest emissions of any fullsize SUV currently on sale. The BMW Vision EfficientDynamics delivers 43.5mpg on the combined cycle and just 172g/km of CO2 emissions.

Despite its green credentials, the X5 ActiveHybrid is no slouch. Output from the diesel stands at 204hp and 400Nm of torque, and the hybrid systems adds a further 20hp and 210Nm of torque under acceleration. This sees the car accelerate from 0-62mph in a reasonable 8.9 seconds.

The mild hybrid solution in the BMW Vision EfficientDynamics uses a compact generator-motor mounted directly onto the gearbox that’s powered by an array of lithium-ion batteries in the boot. The vehicle also features Brake Energy Regeneration technology, lithium-ion batteries and the aforementioned solar panels. BMW previously displayed its new X6 Crossover in hybrid concept form as well, which you can check out in our previous story.

The Geneva Motor Show (4 – 16 March) will mark the world premiere of the BMW Vision EfficientDynamics, a concept car designed to showcase the future direction of BMW’s performance enhancing and emissions lowering innovations. Mild ActiveHybrid technology is combined with a twin-turbocharged four-cylinder diesel engine, a new eight-speed automatic gearbox and even roof-mounted solar panels, and all shrouded in a BMW X5 body.

All of these technologies combine to deliver the best fuel economy and lowest emissions of any large 4x4 currently on sale. The BMW Vision EfficientDynamics delivers 43.5mpg on the combined cycle and just 172g/km of CO2 emissions. However, these frugal figures do not translate into low performance figures. With its twin-turbocharged two-litre diesel engine delivering more than 100hp per litre, the BMW Vision EfficientDynamics concept completes the sprint from zero to 62mph in just 8.9 seconds, a time faster than most current production competitors.

The 2.0-litre four-cylinder diesel engine in the BMW Vision EfficientDynamics uses BMW’s Variable Twin Turbo concept, third-generation common-rail injection and an all aluminium crankcase to deliver 204hp and 400Nm of torque between 2,000 and 2,250rpm. The engine is supplemented by a mild hybrid concept that delivers a further 20hp and 210Nm of torque under acceleration. As a consequence, even though the BMW Vision EfficientDynamics features a relatively small capacity engine, it delivers nearly the same levels of horsepower as the conventional X5, but offers improvements in its already class-leading consumption and emissions figures.

The mild hybrid solution in the BMW Vision EfficientDynamics uses a compact generator that, for the first time, is flange mounted directly onto the gearbox. This motor produces up to 20hp of on-demand power. In addition, BMW’s now familiar Brake Energy Regeneration is used to efficiently capture energy that would previously have been lost when the engine is on overrun. Innovatively, the alternator is also integrated into the crankcase rather than conventionally driven from the front of the engine.

BMW’s concept uses highly efficient lithium-ion batteries in the boot area to store the power generated. These high-storage-capacity batteries enable optimum use of Brake Energy Regeneration. In addition, they create possibilities to power the air conditioning, electric coolant pump and the electric power steering system. For these functions, a 120 volt vehicle power system was designed and runs in parallel with the conventional 12 volt system.

The power harnessed by the batteries is also supplemented by roof mounted photovoltaic solar panels, measuring 1.0 metre square. The energy generated can either be used immediately or stored for later use. Importantly, the power created in this zero- CO2 way can be used to pre-heat the diesel fuel. The less efficient warm-up phase is thus shortened considerably.

This innovative and technologically advanced engine is directly mated to a new eight- speed automatic transmission. Developed jointly between BMW and ZF, the new gearbox delivers fast and efficient gear changes. With such a spread of gears, the car will always be in exactly the right ratio for the prevailing driving conditions. It also improves fuel consumption and minimises emissions.

The chassis and ride-height of the X5 have been adapted for the BMW Vision EfficientDynamics. This includes aerodynamically-efficient 19-inch light alloy wheels with reduced ventilation. The design of the spokes reduces wind resistance to the extent that, at 100mph, the car has to produce one horsepower less than a conventionally-wheeled car. This benefit has not been included in the fuel consumption calculations but, on the road, the impact is noticeable.