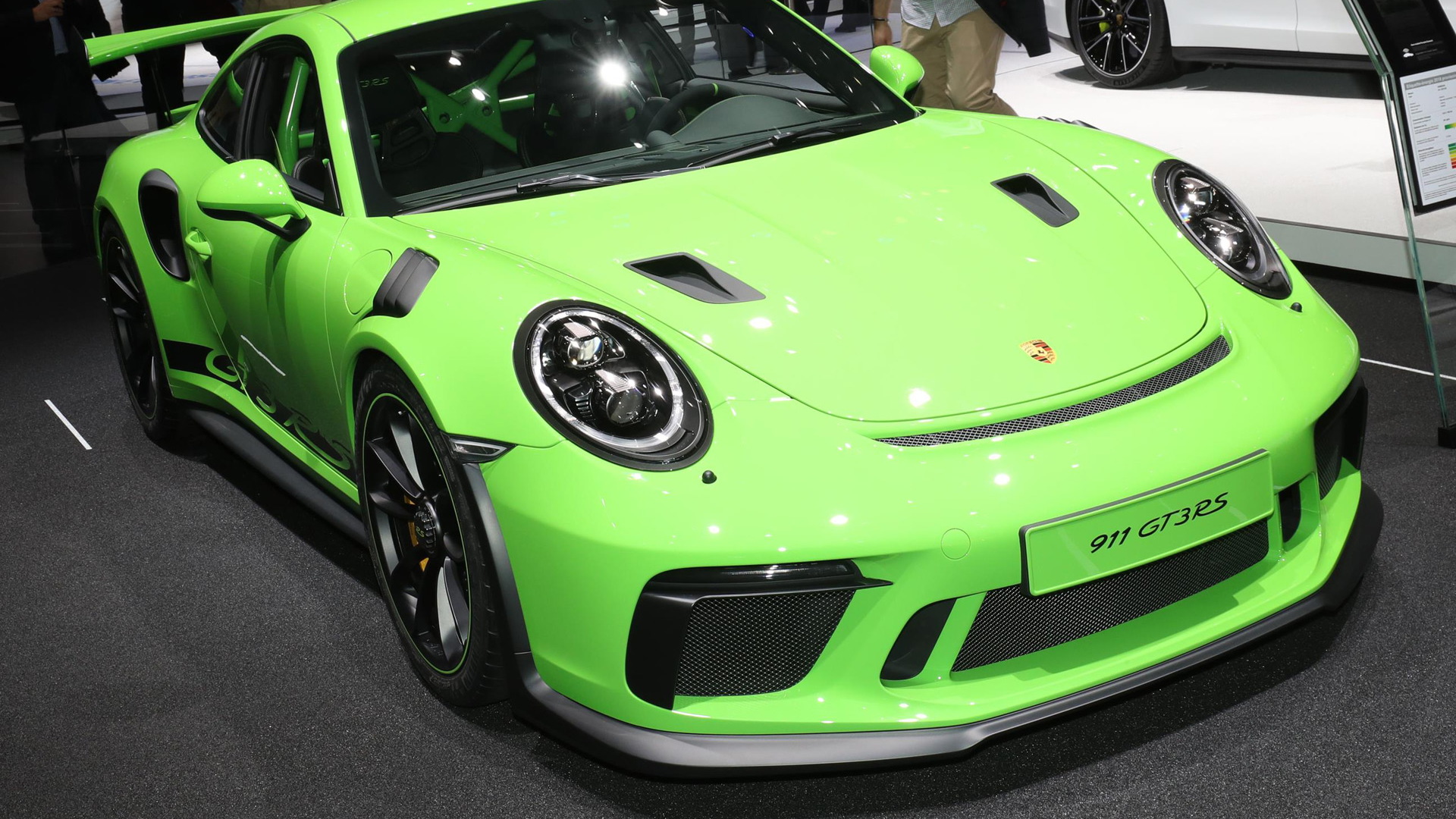 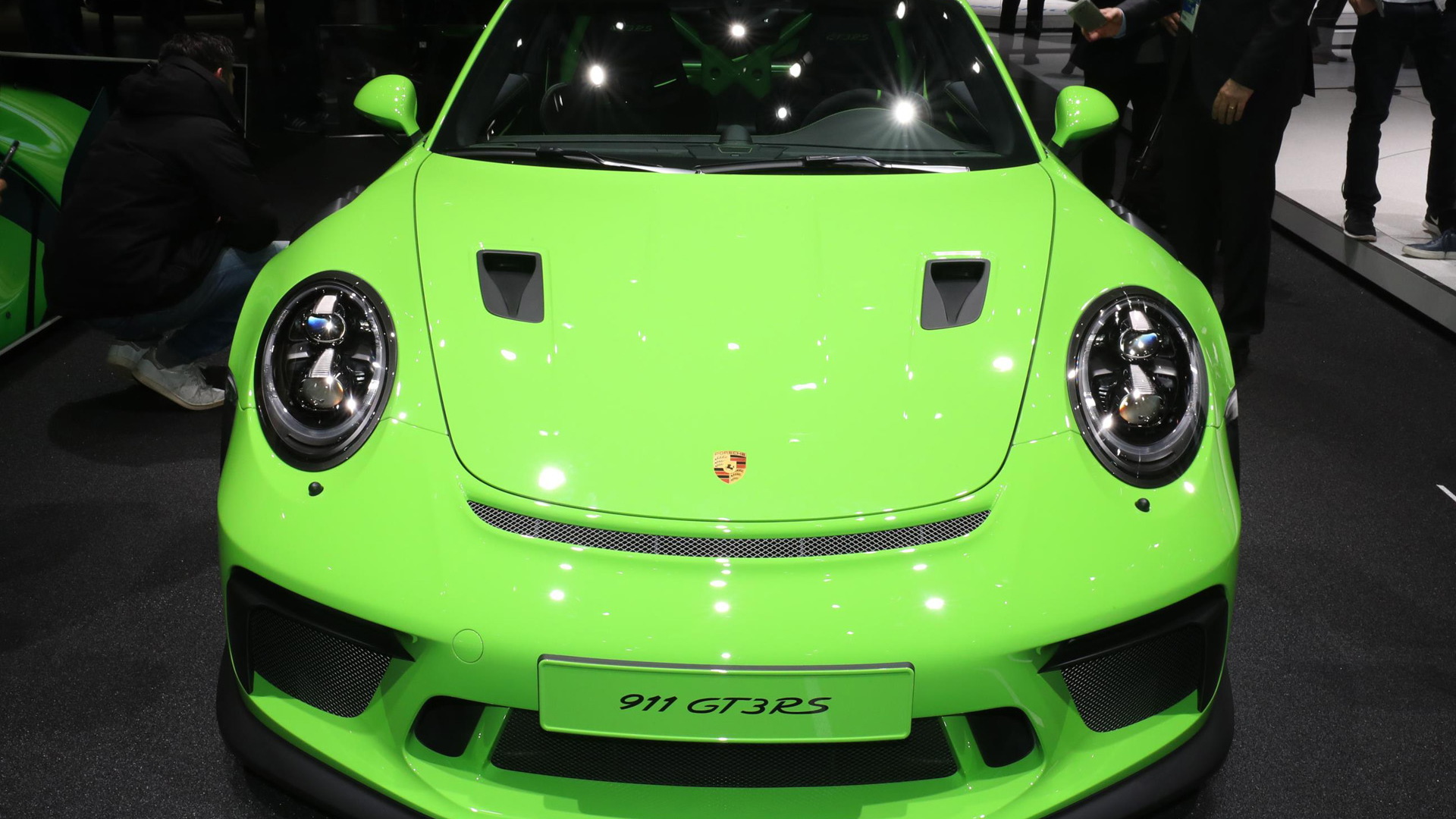 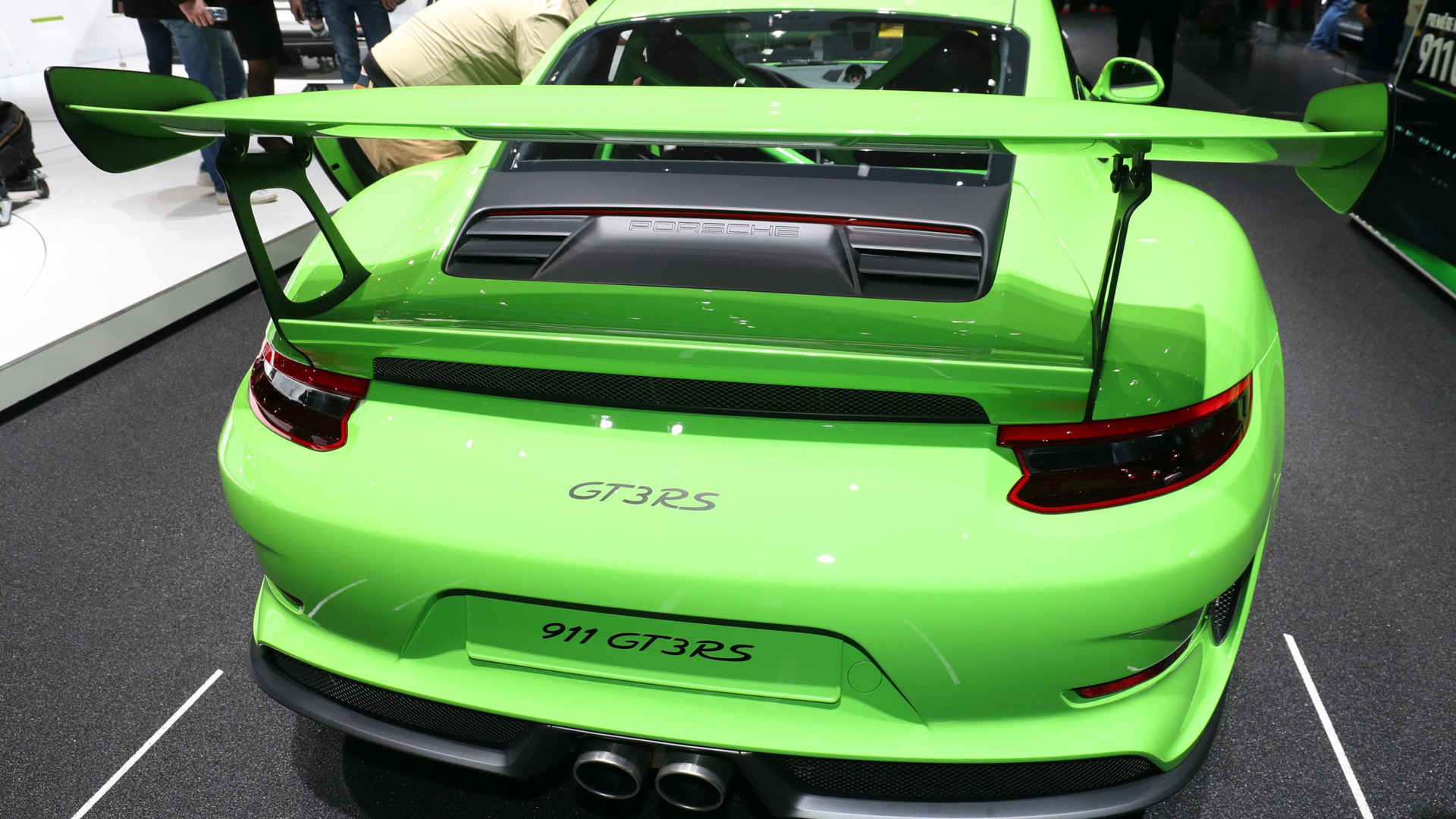 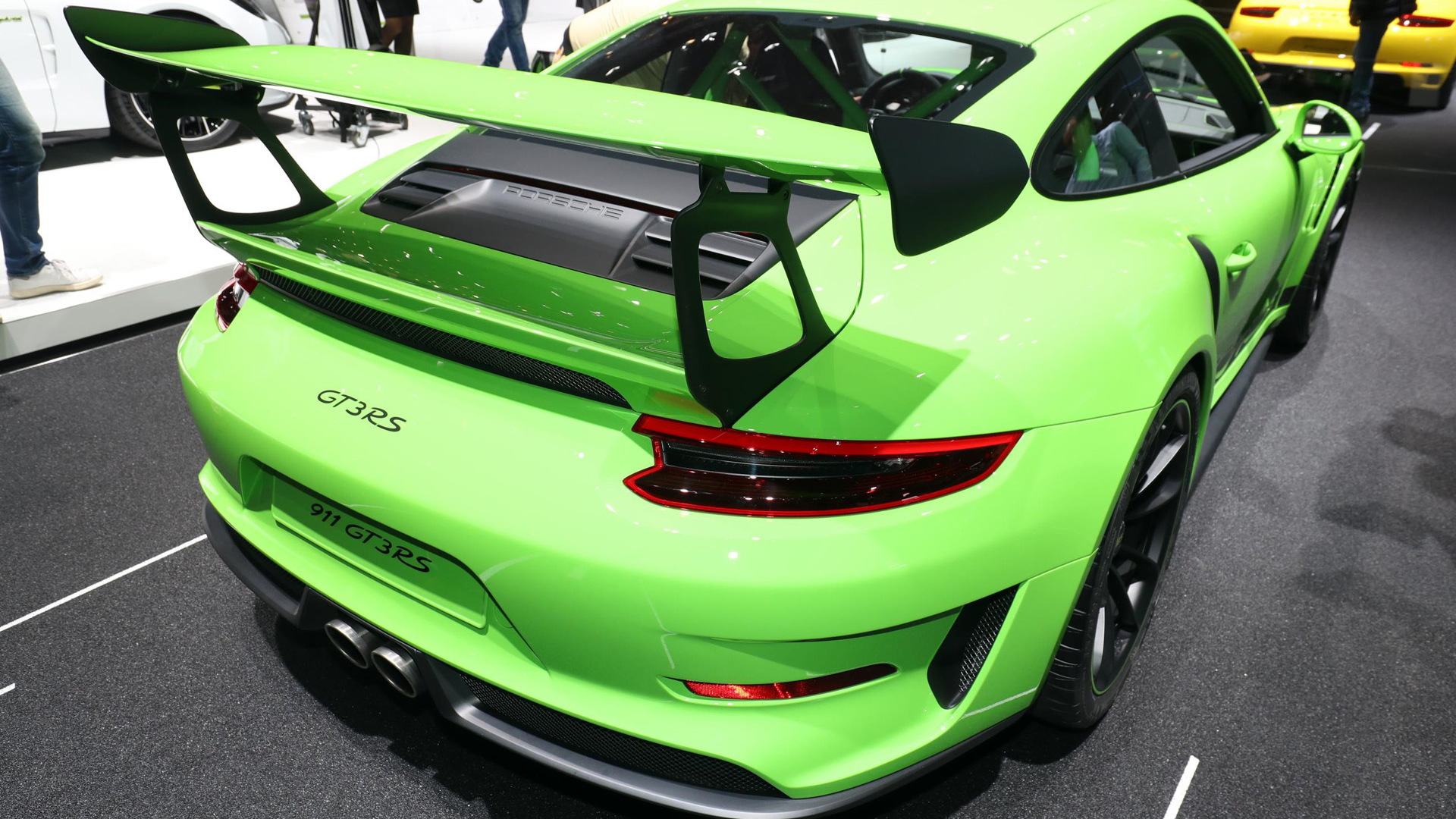 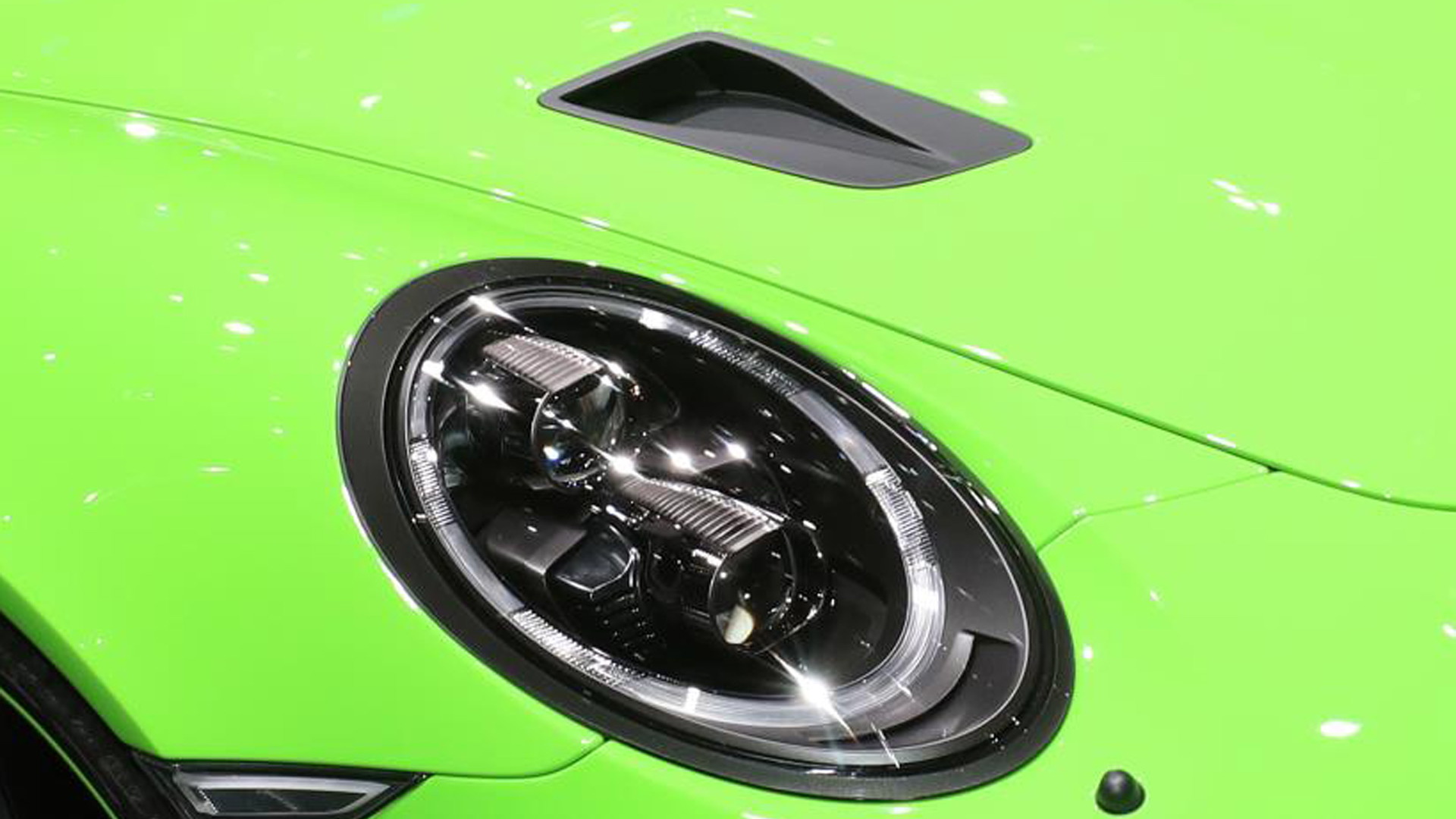 The 911 GT2 RS may be the top of the 911 pecking order but Porsche hasn't forgotten about the equally drool-worthy 911 GT3 RS.

The German firm has developed a few tweaks for its naturally aspirated track star, and now the updated car has been revealed at the 2018 Geneva International Motor Show. The car is due in showrooms in the fall, as a 2019 model.

There are tweaks to the styling, inside and out, and yes, there's more power to be had from the familiar 4.0-liter atmo flat-6.

Starting with the exterior, aerodynamics and lightweight construction have played the lead role in the design. This is a Porsche GT model, after all. The most noticeable change is the more aggressive front fascia matching the one on the recently updated 911 GT3, which itself borrows the design from Porsche's latest 911 GT3 Cup race car.

Additionally, the hood and front fenders are made of carbon fiber and the roof consists of magnesium. Like on the 2018 911 GT2 RS, NACA ducts in the hood optimize brake cooling without increasing drag. The front fascia features a spoiler lip that is larger than on the previous model, increasing downforce in conjunction with the larger side skirts. At the rear, the large wing mounted on the carbon fiber deck lid works in combination with a rear underbody diffuser. The result is more than twice the downforce of the regular GT3 on which the car is based.

As mentioned, a 4.0-liter flat-6 remains, though the horsepower has been bumped up by 20 horses to a new total of 520 hp and torque up 8 pound-feet to 346. This was achieved via an increase in revs to a maximum 9,000 rpm, and sees the GT3 RS hit 60 mph in 3.0 seconds, or 0.1 of a second quicker than before. Drive is still to the rear wheels via a 7-speed dual-clutch transmission. Porsche won't add a manual transmission to its updated GT3 RS like it did with the regular GT3, though we're sure these guys will.

The rear-wheel-steering system has been sharpened and a new set of forged wheels measuring 20 inches up front and 21 inches in the rear have been fitted. These wheels are shod with 265/35 and 325/30 tires, respectively. Furthermore, the updated GT3 RS's suspension features new helper springs at the front axle, in addition to the rear. These work in conjunction with a set of standard active dampers.

And weight has been reduced thanks to the addition of a lighter engine cover, new carbon fiber shells for the seats, and reduced sound-deadening material. Further weight can be shed by adding an available Weissach Package, as well as choosing magnesium wheels (only available with Weissach Package) over the standard forged set and carbon-ceramic brake discs over the standard cast iron set. When equipped with these options, the curb weight of the car drops to 3,153 pounds.

Pricing for the 2019 GT3 RS will start at $188,550, including destination. The Weissach Package will set you back an additional $18,000, and if you also want the magnesium wheels you're going to have to add an additional $13,000. Porsche options, you know.