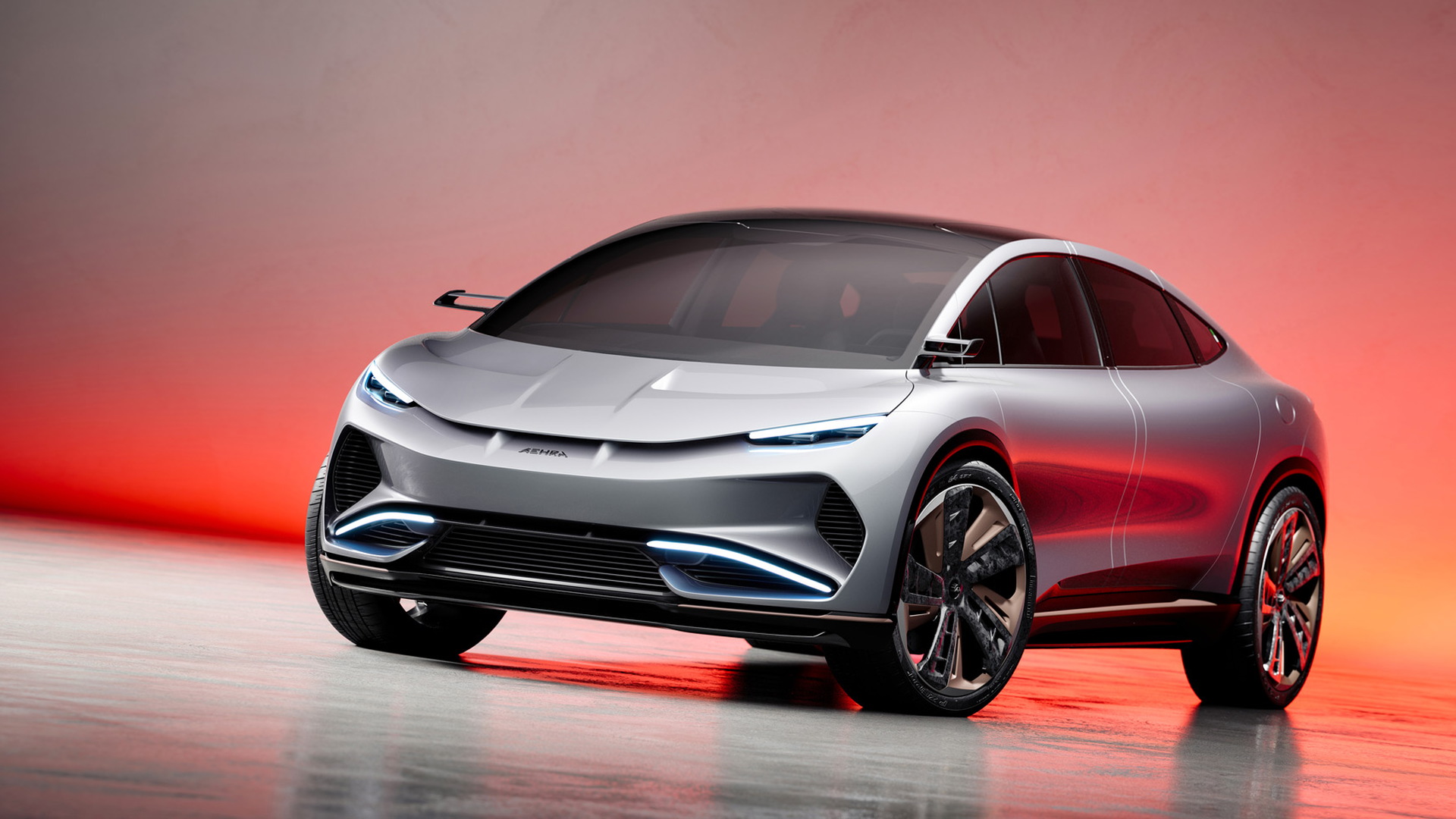 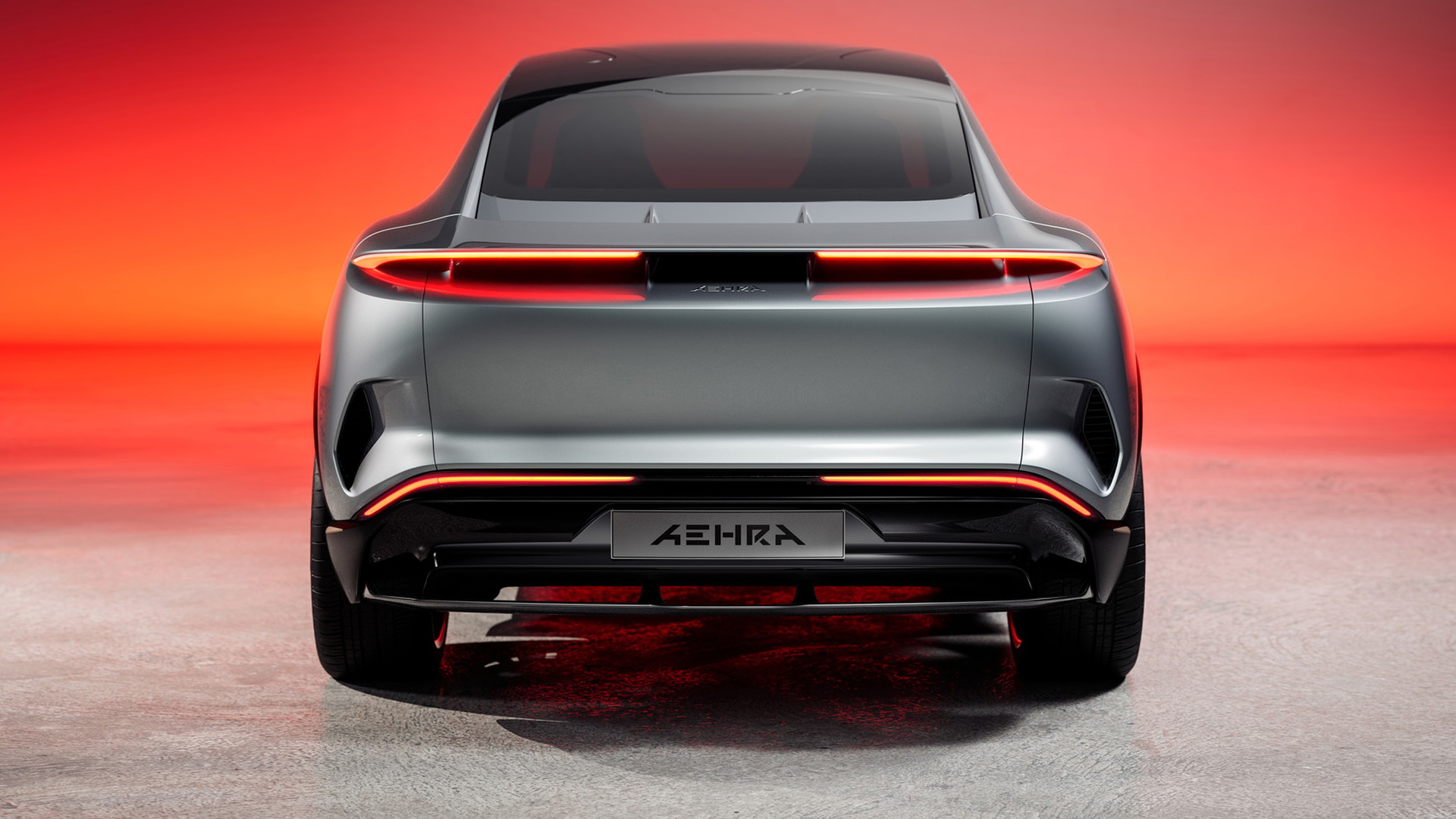 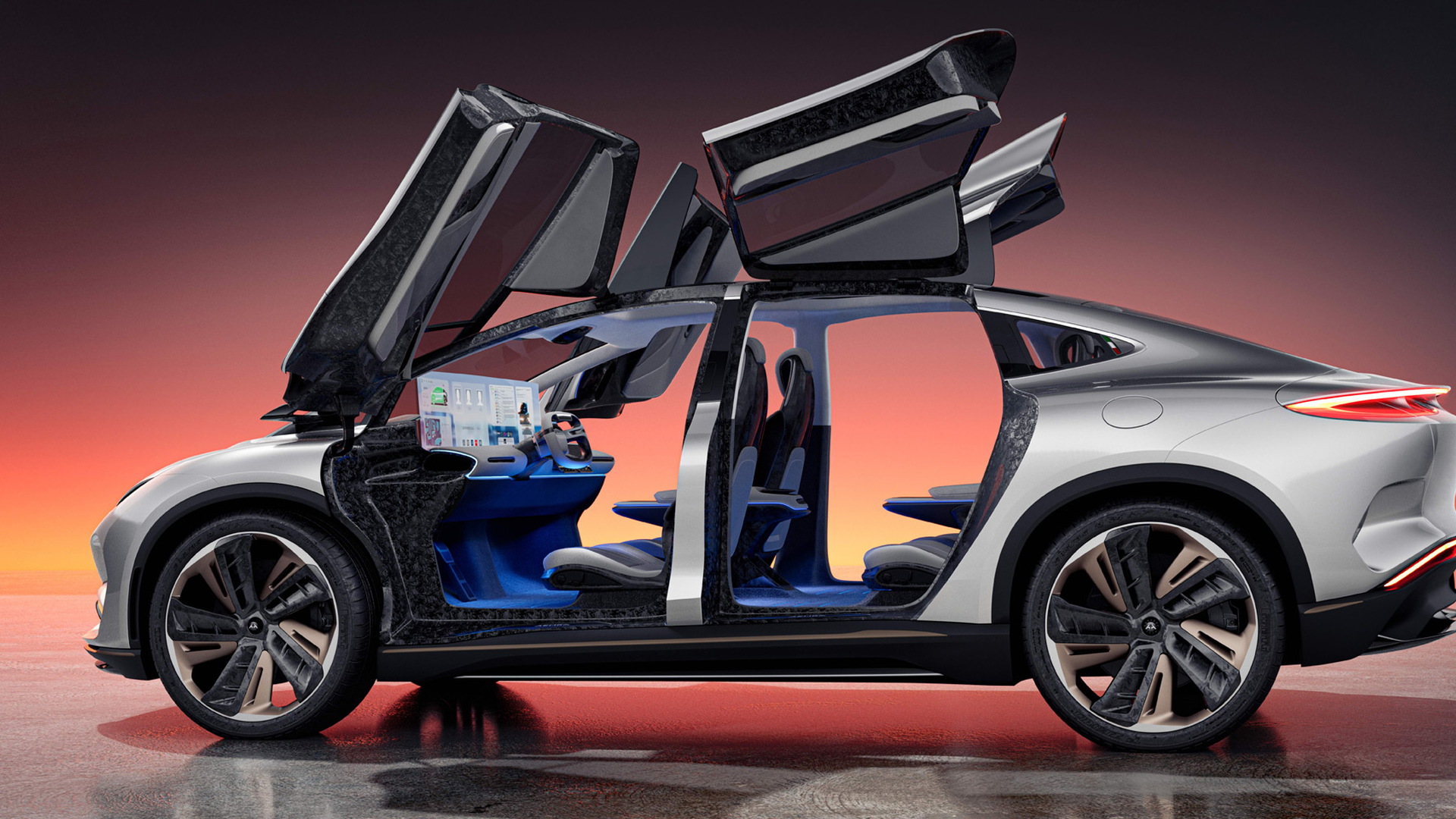 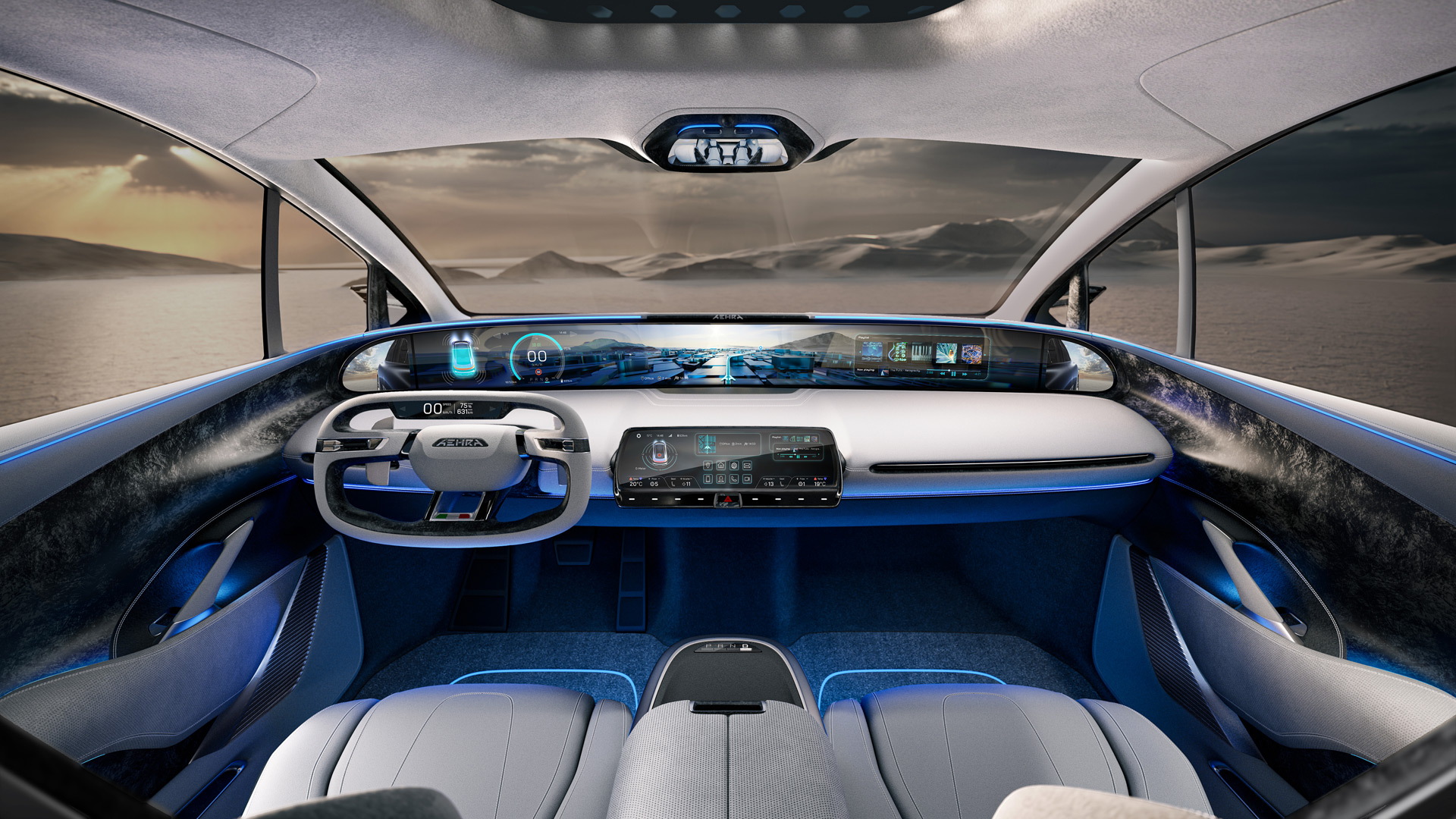 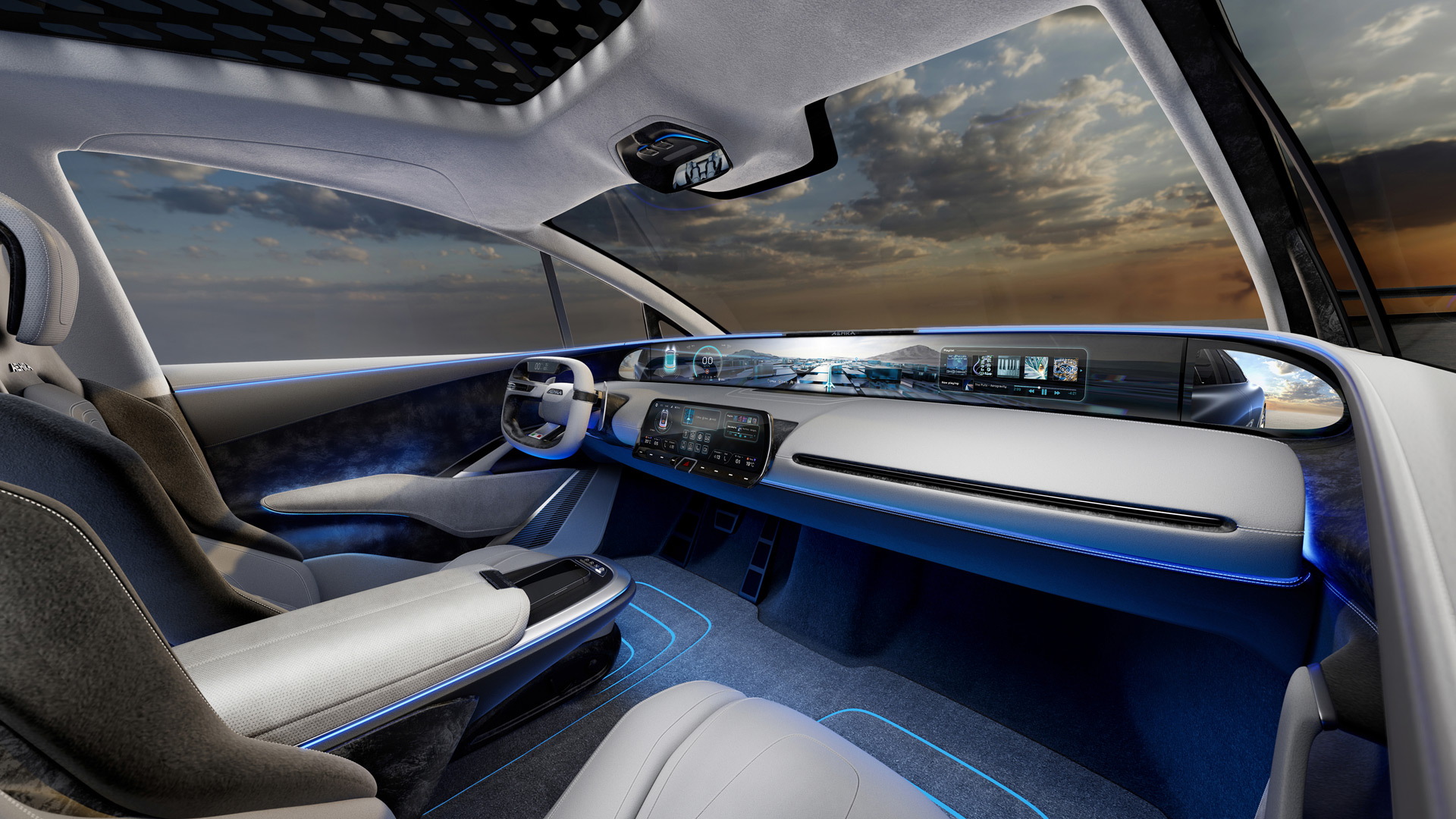 An Italian EV startup by the name of Aehra plans to launch a radical SUV featuring supercar-style vertical-lifting doors front and rear.

The company provided a first look at the vehicle, known simply as the Aehra SUV, in November, and this week it offered a glimpse of the interior.

The SUV's cabin will be a spacious place, thanks to a wheelbase that stretches 118 inches. For comparison, the wheelbase on the full-size Cadillac Escalade is less than three inches longer. According to Aehra, four NBA players will comfortably fit in the SUV. Buyers will be able to choose between four- and five-seat configurations.

At the front of the cabin is a screen that spans the width of the dash and is flanked by a small screen on either side serving as the displays for the camera-based side mirrors. This dash-wide screen can extend upward when the vehicle is parked, turning the cabin into a lounge or room for Zoom-style meetings.

There's also a small screen integrated with the rectangular-shaped steering wheel to display key driving information, as well as a tablet-like screen mounted in the center stack to serve as the main input hub for features like the navigation, climate settings, and infotainment.

Traditional materials like hand-stitched leather and carbon fiber are found in other areas, while the seats are said to be similar to what you find in supercars. They're designed to not only be comfy but also supportive during high-speed driving. The seats are made from aluminum and recycled carbon fiber, and are lined in leather.

Aehra, whose design chief, Filippo Perini, penned the Aventador and Huracán supercars while heading design at Lamborghini, is also working on a sedan. The sedan will be revealed next spring.

Aehra plans to initiate the process for its first round of external funding shortly and if all goes to plan will put the SUV and sedan into production around late 2025. Key markets where the company plans to sell its vehicles include North America, Europe, China, and the Gulf States.