The Toyota Land Cruiser is a popular choice for people heading into dangerous places, so it's good news that the latest armored Land Cruiser from Canada's Inkas received good marks in a recent round of tests.

As part of the European VPAM certification program, over 700 laser-guided shots were fired at the Land Cruiser, according to Inkas. The armored SUV also had to withstand multiple grenade detonations and a 33-pound TNT blast. As you can see in the video below, the Land Cruiser survived (mostly intact) and kept its crash-test dummy occupants safe. 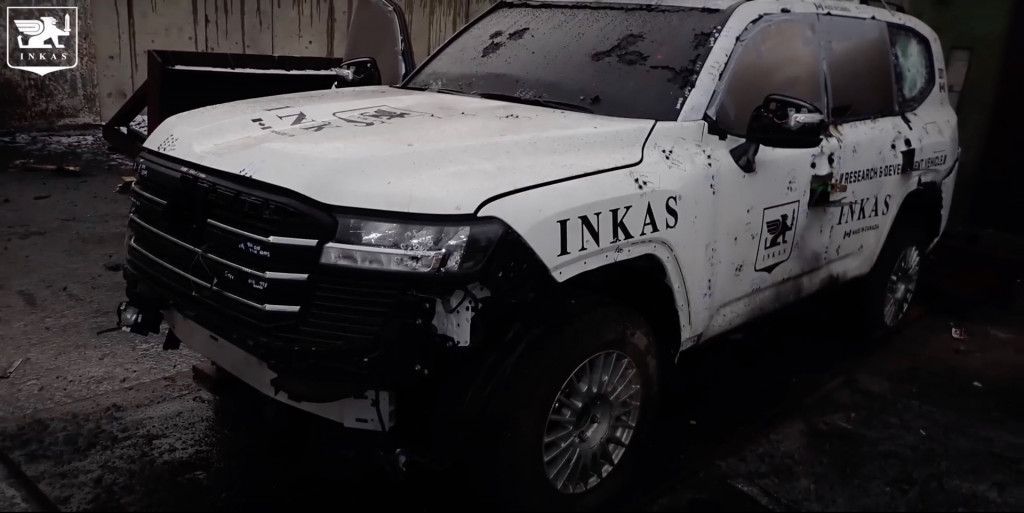 The standard armoring package includes ballistic glass and overlapping armor plates protecting the cabin, but Inkas also offers armor for the engine compartment and radiator, as well as an underfloor blast plate that doubles as a skid plate, as optional extras.

To handle the armor's extra weight, Inkas swaps in its own suspension system, as well as upgraded brakes, reinforced wheels on run-flat tires, and heavy-duty door hinges. A siren, PA system, and fire suppression system are also standard, while a long list of options includes signal-jamming equipment, gun ports, a night vision scope for the driver, a winch, and a reinforced front bumper—for ramming barricades.

Inkas' latest danger zone transporter is based on the redesigned 2022 Toyota Land Cruiser unveiled last year. Known internally as the 300 series, it marks the first redesign of Toyota's iconic off-roader in over a decade. The Land Cruiser remains body-on-frame, but rides on a new GA-F platform and ditches the traditional V-8 for gasoline and diesel twin-turbo V-6 engines.

The redesigned Land Cruiser isn't sold in the U.S., but we do get the related Lexus LX. Inkas has an armored version of that, too.