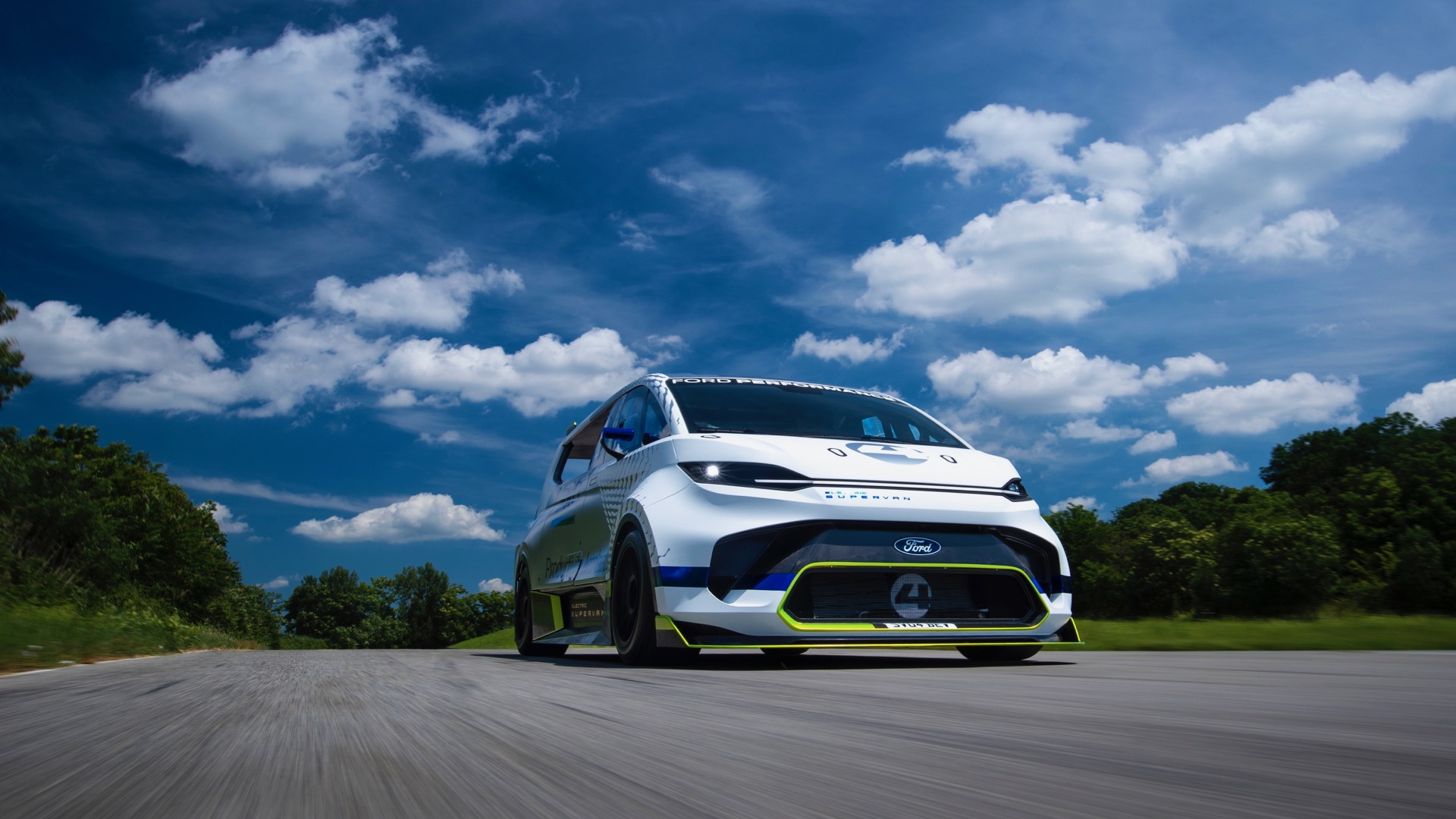 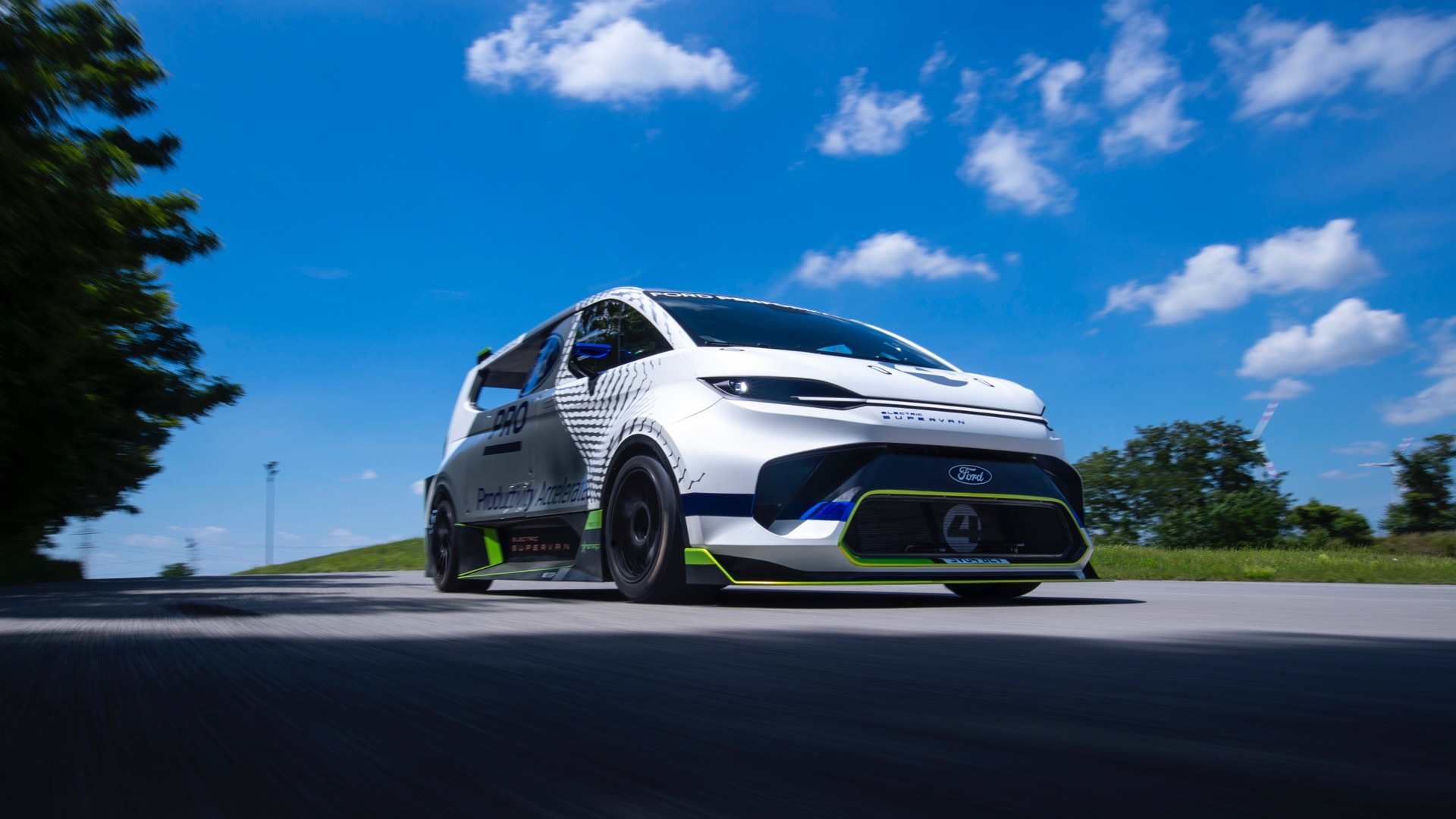 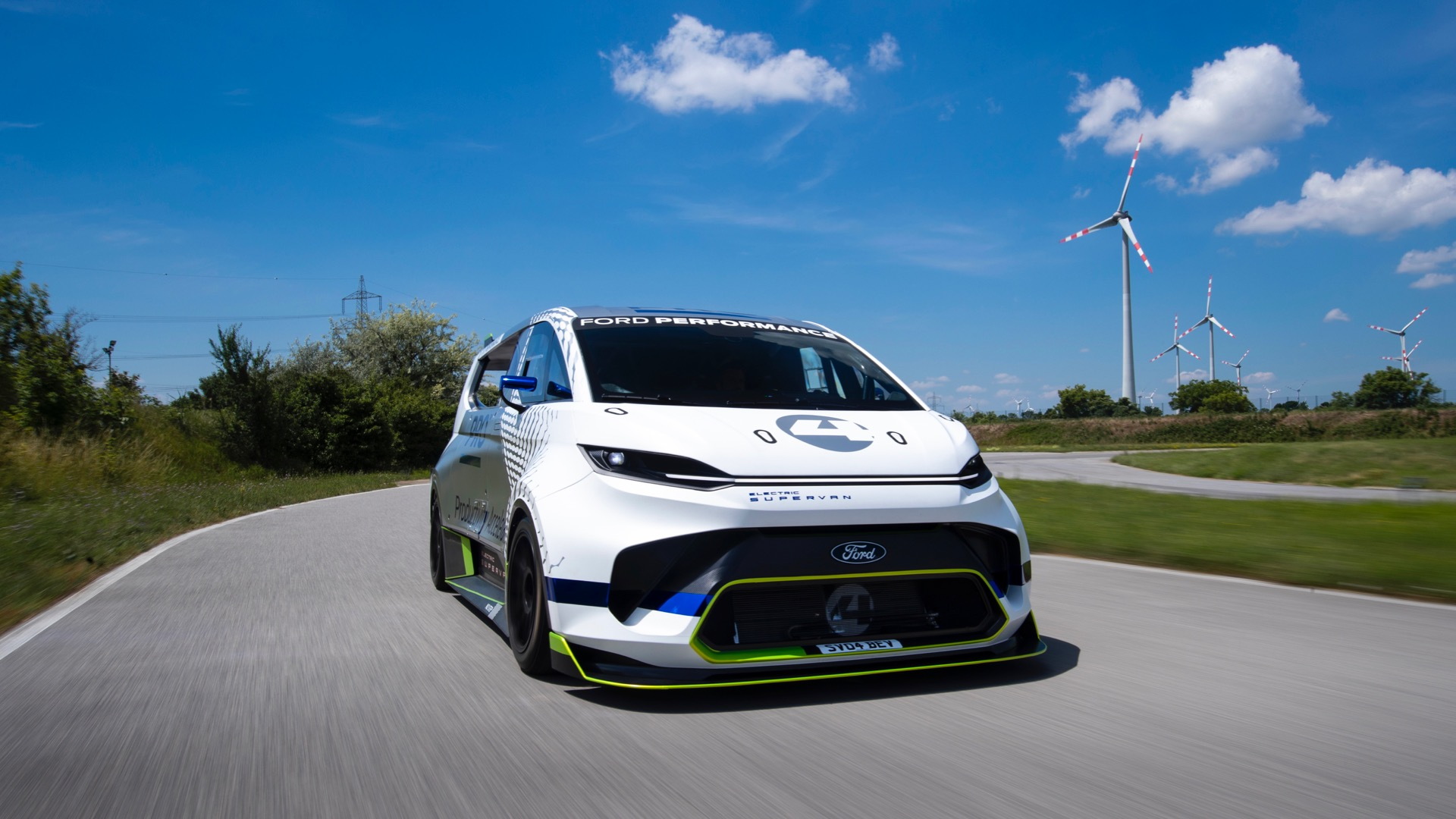 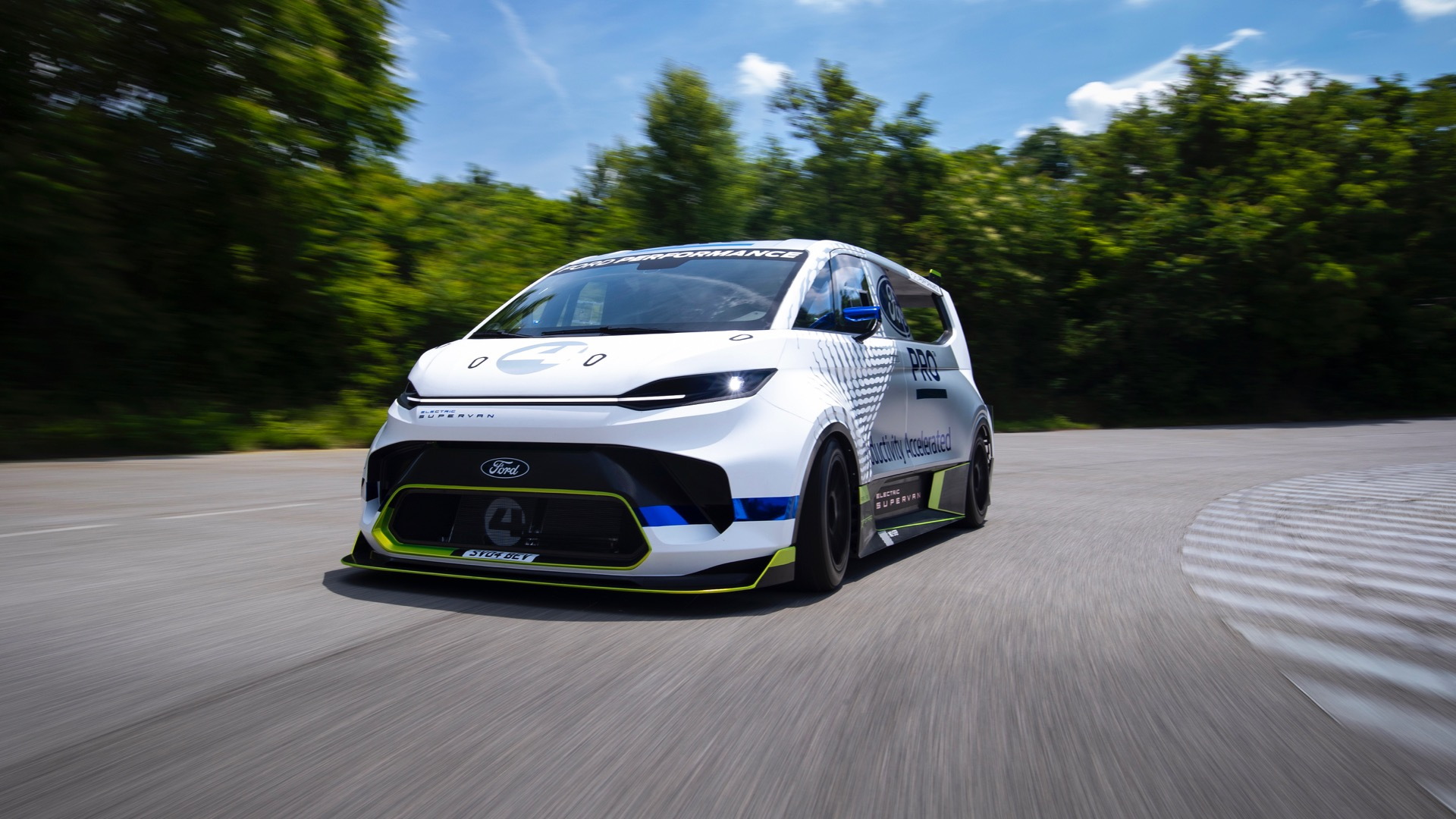 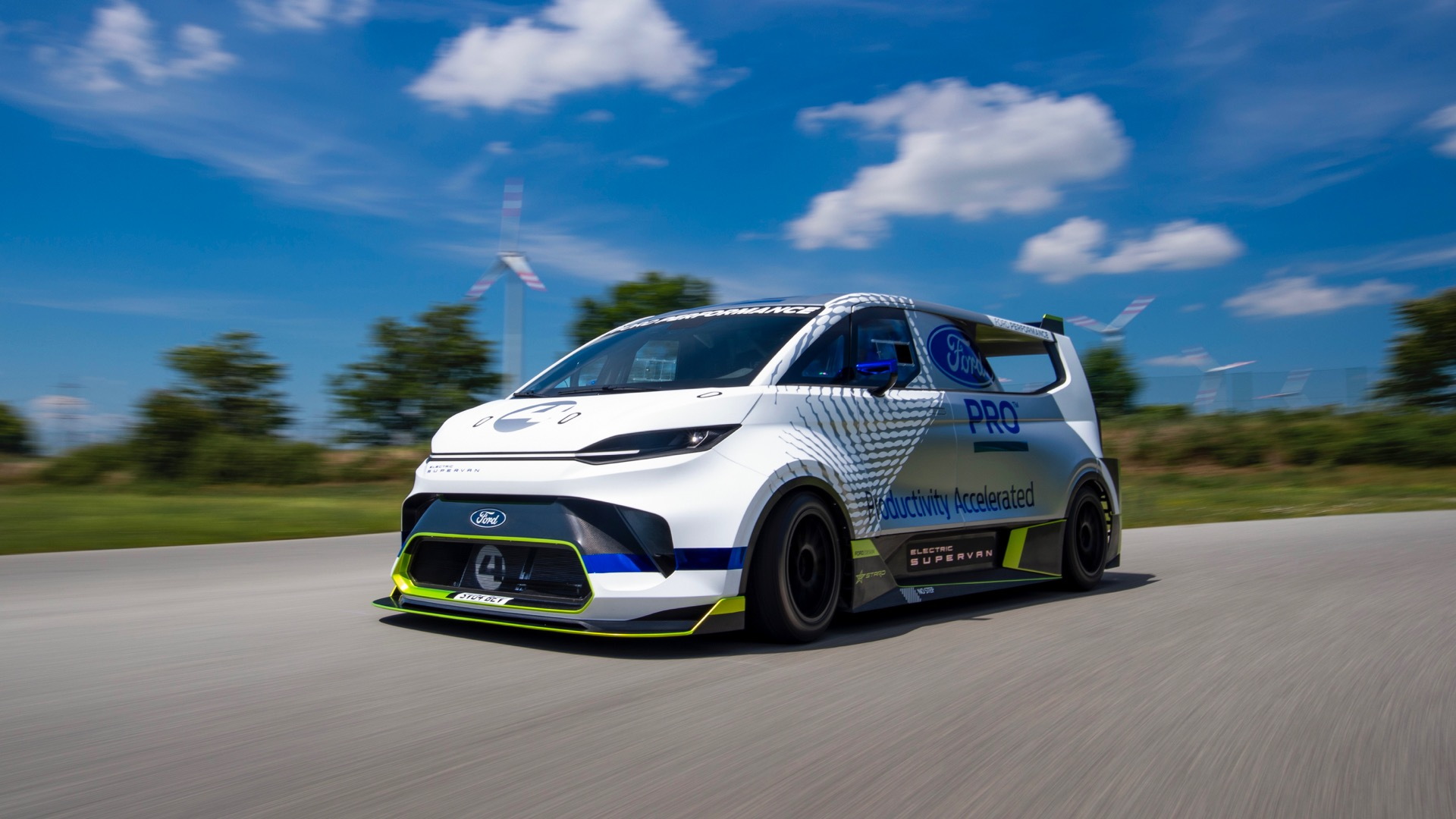 Ford UK has a tradition of turning Transit vans into hot-rodded Supervans, and this time it's going electric. Dubbed Ford Pro Electric Supervan, the fourth Supervan will debut publicly at the 2022 Goodwood Festival of Speed.

The Electric Supervan is based on the Ford E-Transit Custom, a European-market electric van that's a bit smaller than the E-Transit we get in the U.S. It was developed by Ford Performance and Ford's European design team, in partnership with Austrian electrified rallying specialist STARD, Ford said in a press release.

While it still has room for cargo behind the driver, the Supervan has little in common with a stock E-Transit Custom. The swollen body panels are composite, and the van rides on a purpose-built steel space frame with front and rear subframes housing unequal-length double wishbone suspension front and rear. Ford also fitted an array of onboard cameras to capture video of the van's high-speed runs.

The van is powered by four electric motors, which send a combined 1,972 hp to all four wheels. That will get this van from 0-62 mph in under 2.0 seconds, according to Ford. The motors are fed by a 50-kwh liquid-cooled battery pack, which can be recharged in 45 minutes with a DC fast-charger, the automaker claims.

Charging is controlled from the stock in-cab touchscreen, which also allows for the selection of different drive modes, including Road, Track, Drag, Drift, and Rally. Ford also includes a pit-lane speed limiter, launch control, three-stage regenerative braking, and a "tire cleaning mode" that brakes the wheels on one axle while allowing the others to spin freely for spectacular burnouts.

This build isn't just about showing off, though. Ford is also trying to draw a connection between the data services it offers van-buying fleet customers and the telemetry acquisition of modern race cars. In both cases, data acquisition allows vehicles to be monitored remotely, Ford noted.

The Supervan will climb the hill at Goodwood with Romain Dumas at the wheel. Dumas previously set overall records on both Lord March's driveway and the Pikes Peak International Hill Climb, as well as an EV Nürburgring lap record, in the Volkswagen ID.R electric racer.

Ford's first Supervan was revealed in 1971 with a mid-mounted V-8 from a GT40 and body of a Transit Mk. 1 van. The next iteration, built in 1984, sported an all-fiberglass body replicating the look of a Transit Mk. 2 and the 582-hp Cosworth V-8 from the Ford C100 race car. In 1994, that vehicle was rebuilt into the third Supervan, with Transit Mk. 3 bodywork and a 641-hp Cosworth HB Formula One V-8.