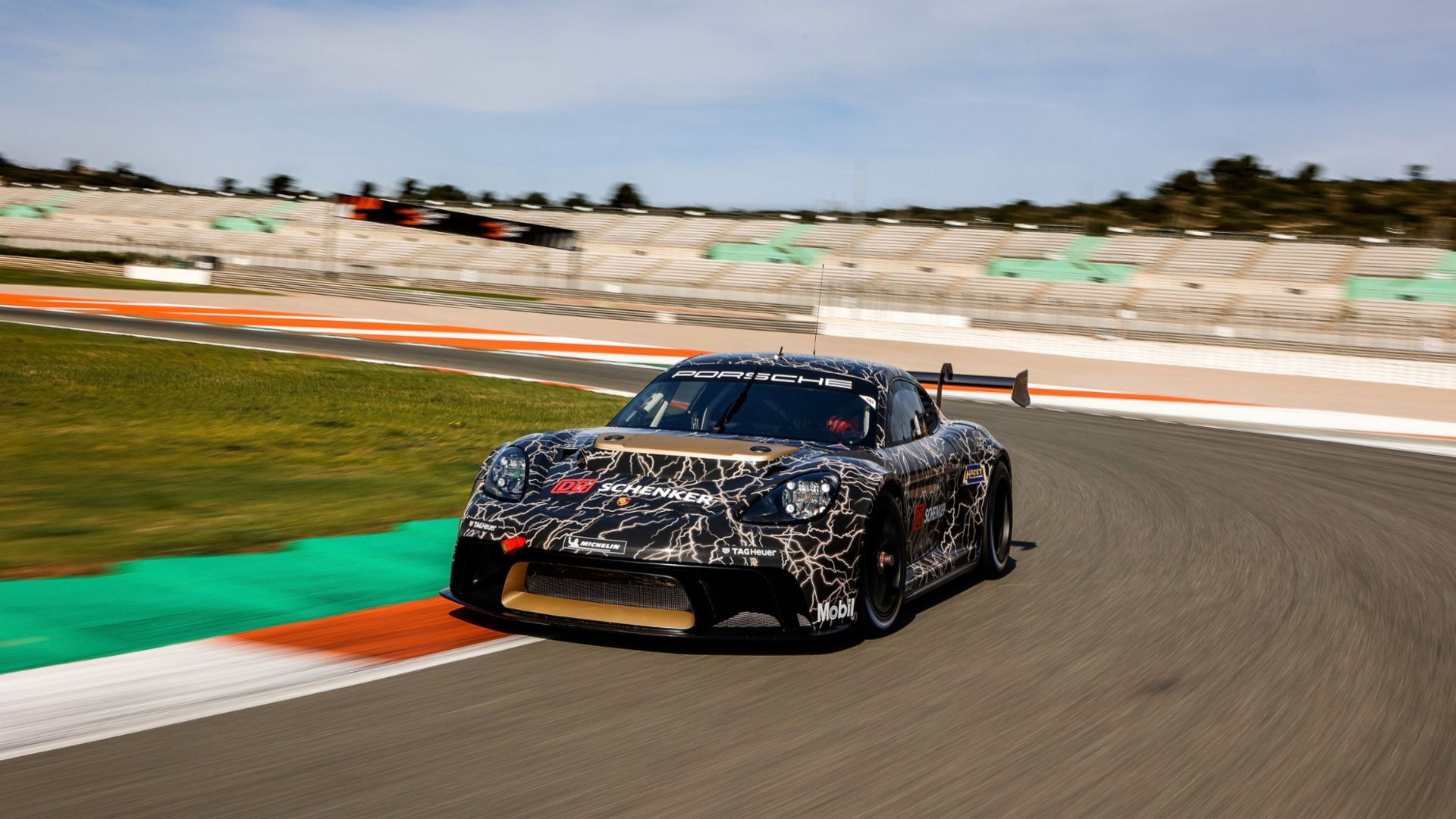 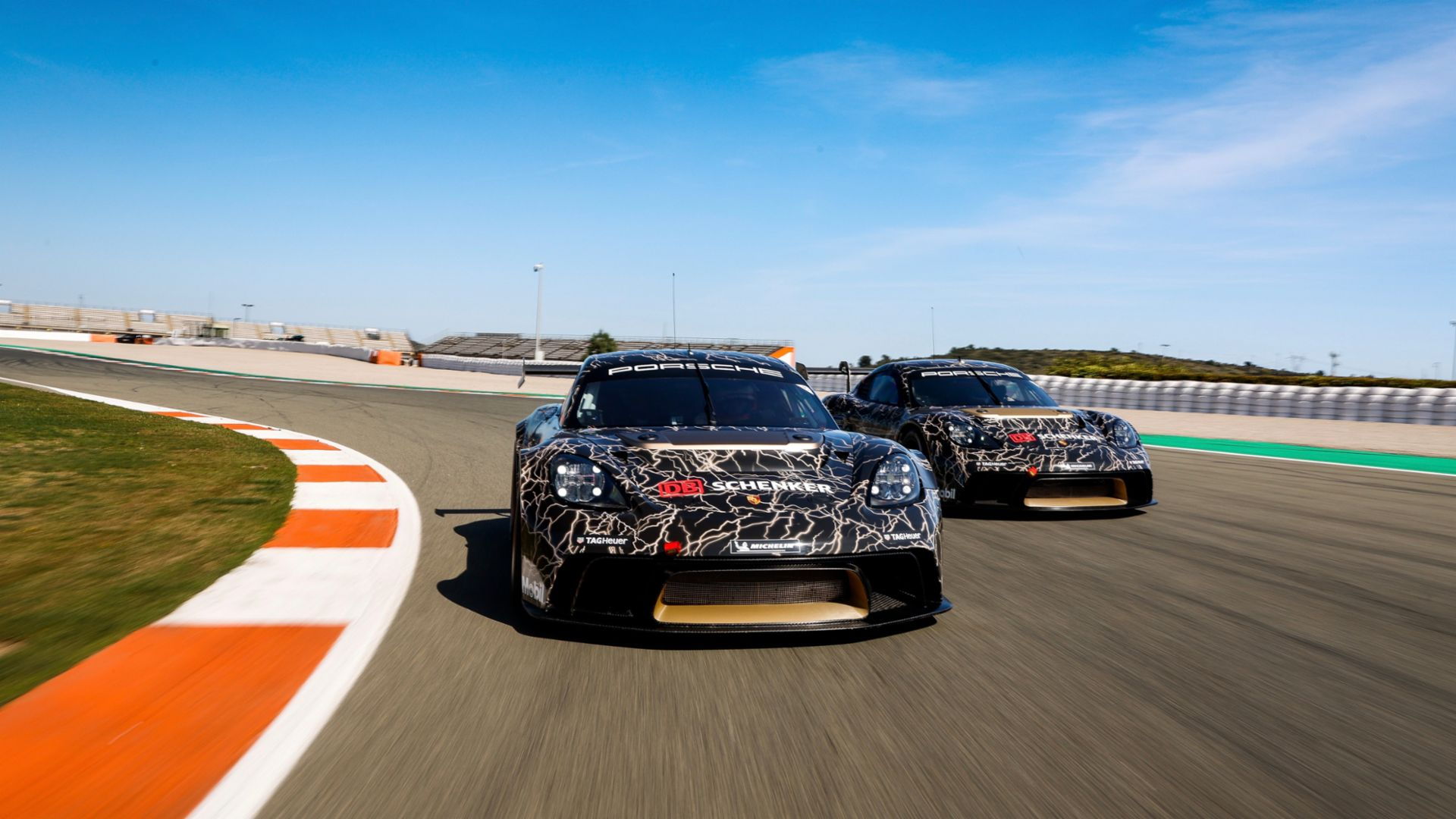 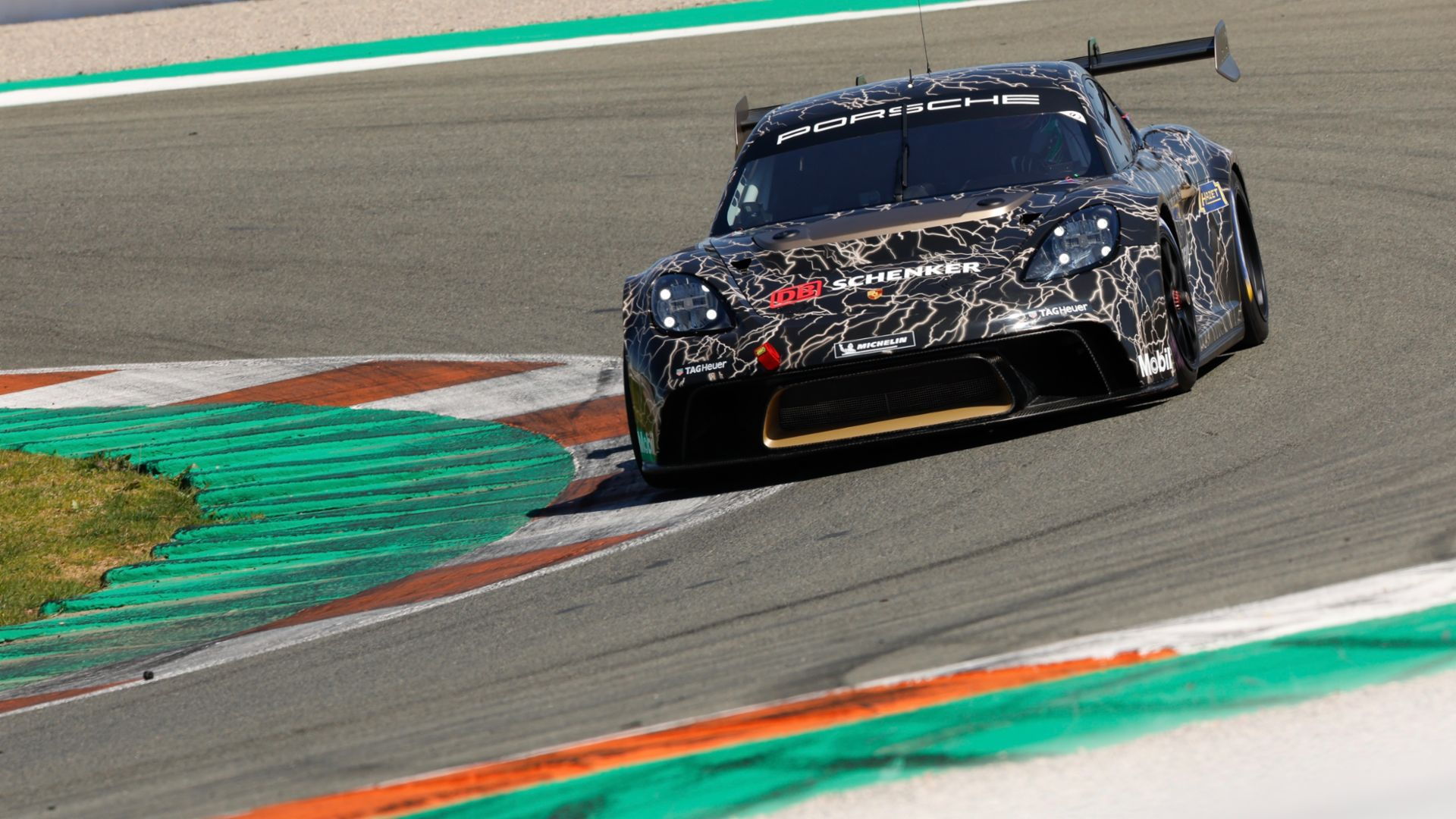 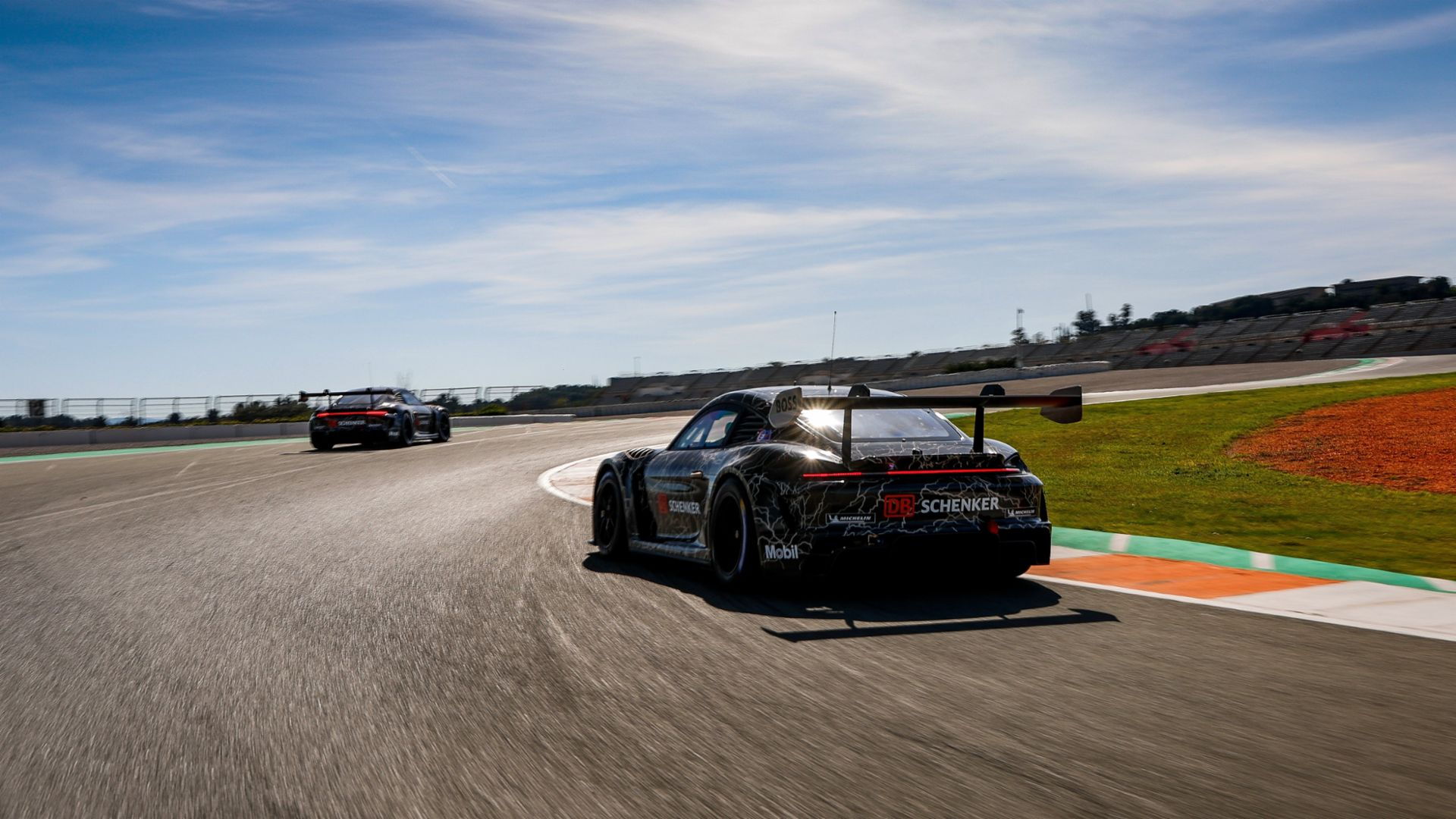 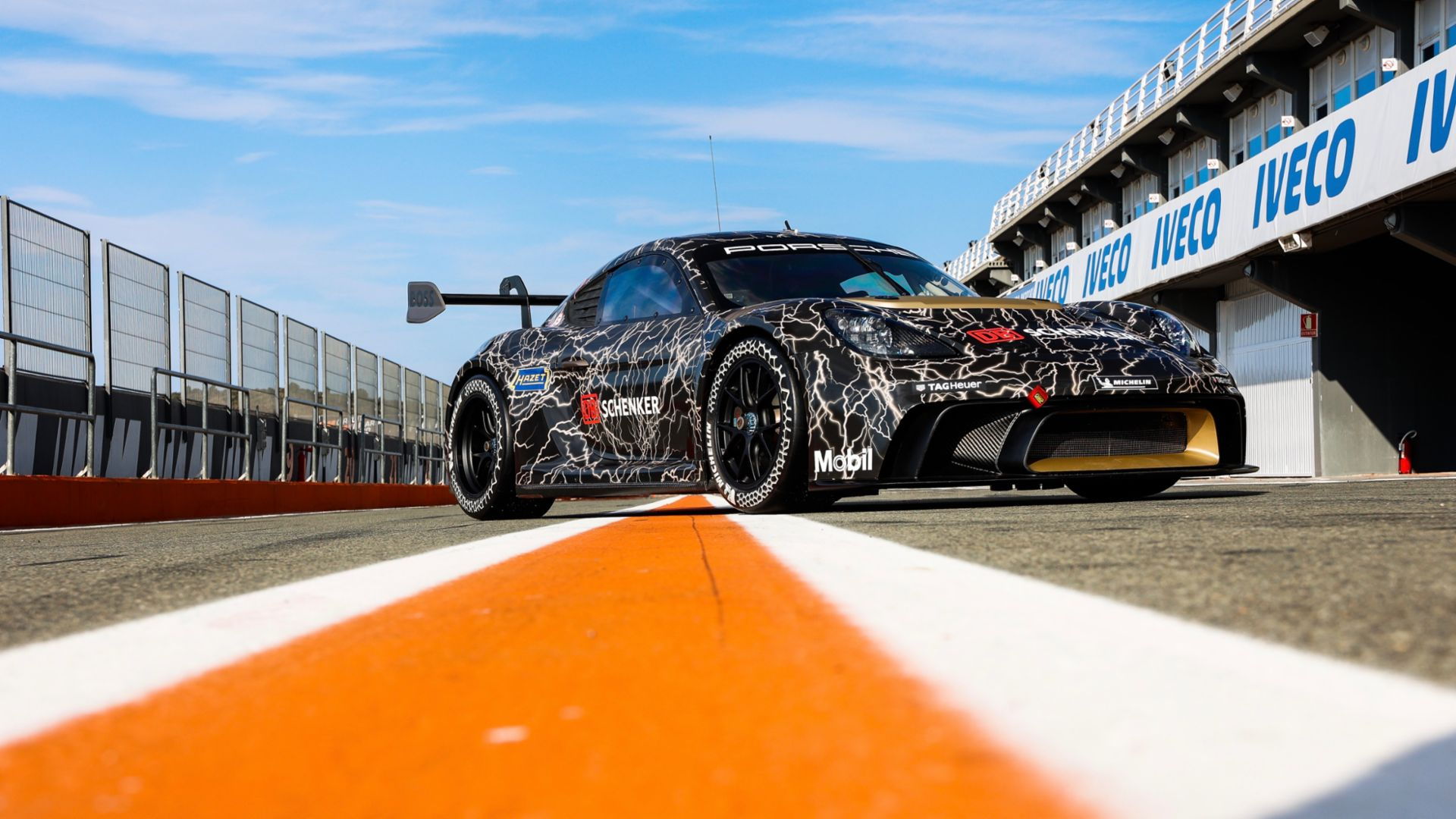 Porsche has begun real-world testing of technology from its Mission R electric race car concept in a Cayman-based prototype.

The Porsche 718 Cayman GT4 ePerformance combines the body shell from the 718 Cayman GT4 Clubsport racer with the Mission R's powertrain and battery tech, Porsche explained Monday in a press release.

That means the Cayman GT4 ePerformance has an electric motor powering each axle, with the same 1,073-hp maximum output as the Mission R. However, engineers plan to dial that back a bit for most use cases. Porsche says the electric Cayman produces 985 hp in simulated qualifying trim, and 603 hp in simulated race trim.

At the lower race power level, the car has enough battery charge to run for 30 minutes, the same length as a Carrera Cup race, Porsche claims. The automaker also says the Cayman GT4 ePerformance can match a current 911 GT3 Cup car in lap times and speed.

An oil-cooling system for the battery pack and motors helps address heat-related performance losses so power remains constant for the targeted half-hour racing stint, according to Porsche. When it's time to recharge, a 900-volt electrical architecture allows for a 5% to 80% charge in about 15 minutes, the automaker claims.

A design team led by Grant Larson—designer of the original Porsche Boxster concept—also made some changes to the bodywork. The electric racer is 5.5 inches wider than a standard 718 Cayman GT4 Clubsport, thanks to wider fender flares that cover 18-inch Michelin racing tires. The body panels and the tires incorporate renewable materials, including natural-fiber composites and recycled carbon fiber for the bodywork.

The Cayman GT4 ePerformance will make its public debut at the 2022 Goodwood Festival of Speed, scheduled for June 23-26. It will then head to Porsche's Leipzig, Germany, factory in August for that facility's 20th anniversary, followed by a tour of European countries. A pair of the prototypes will then travel to North America in 2023 and Asia in 2024.

By that time, Porsche may be ready to show a production electric 718, according to a 2021 Car and Driver report. The automaker estimates that by 2030 more than 80% of its sales will be EVs. It's investing in battery tech and manufacturing to prepare for that.