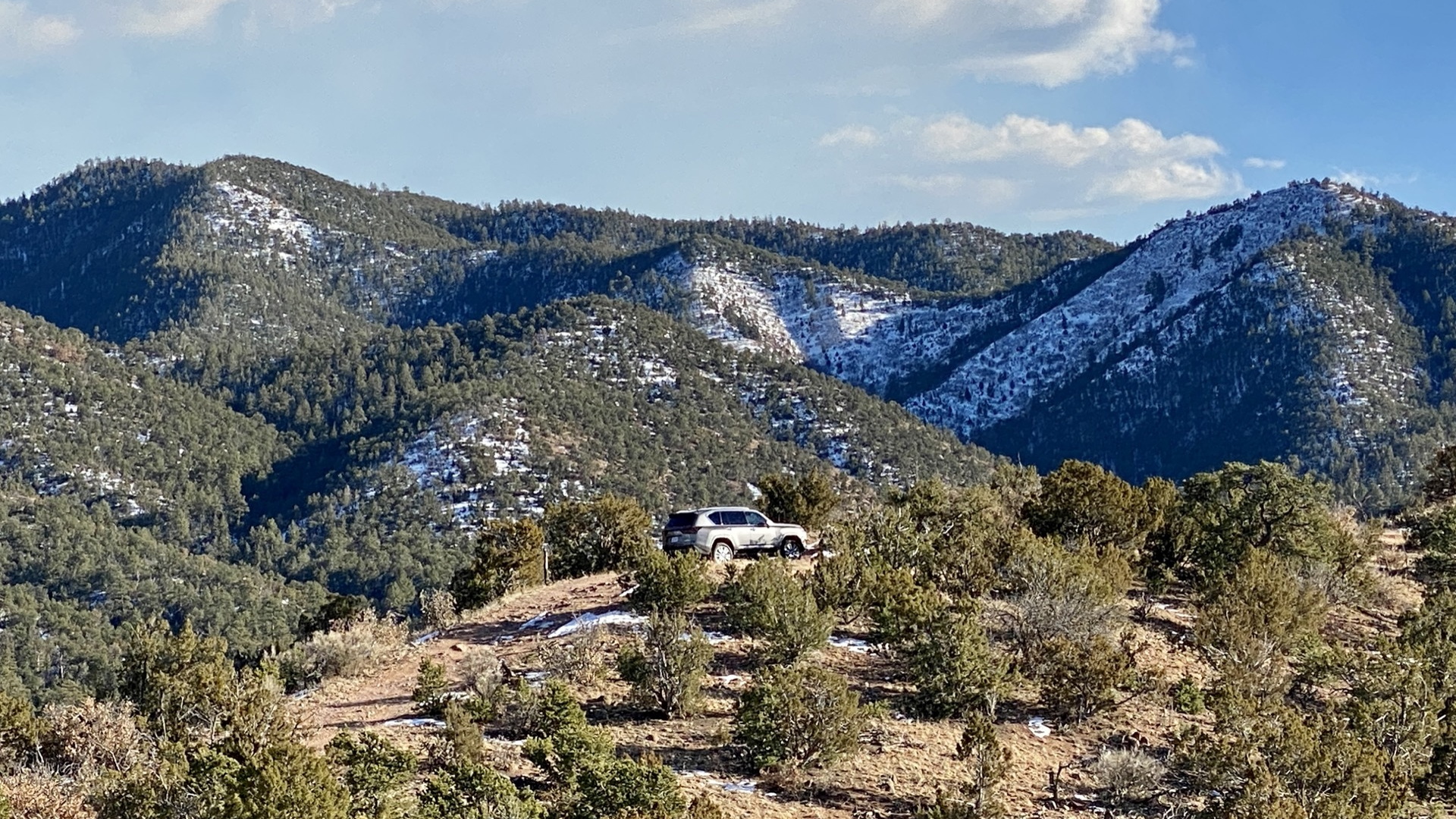 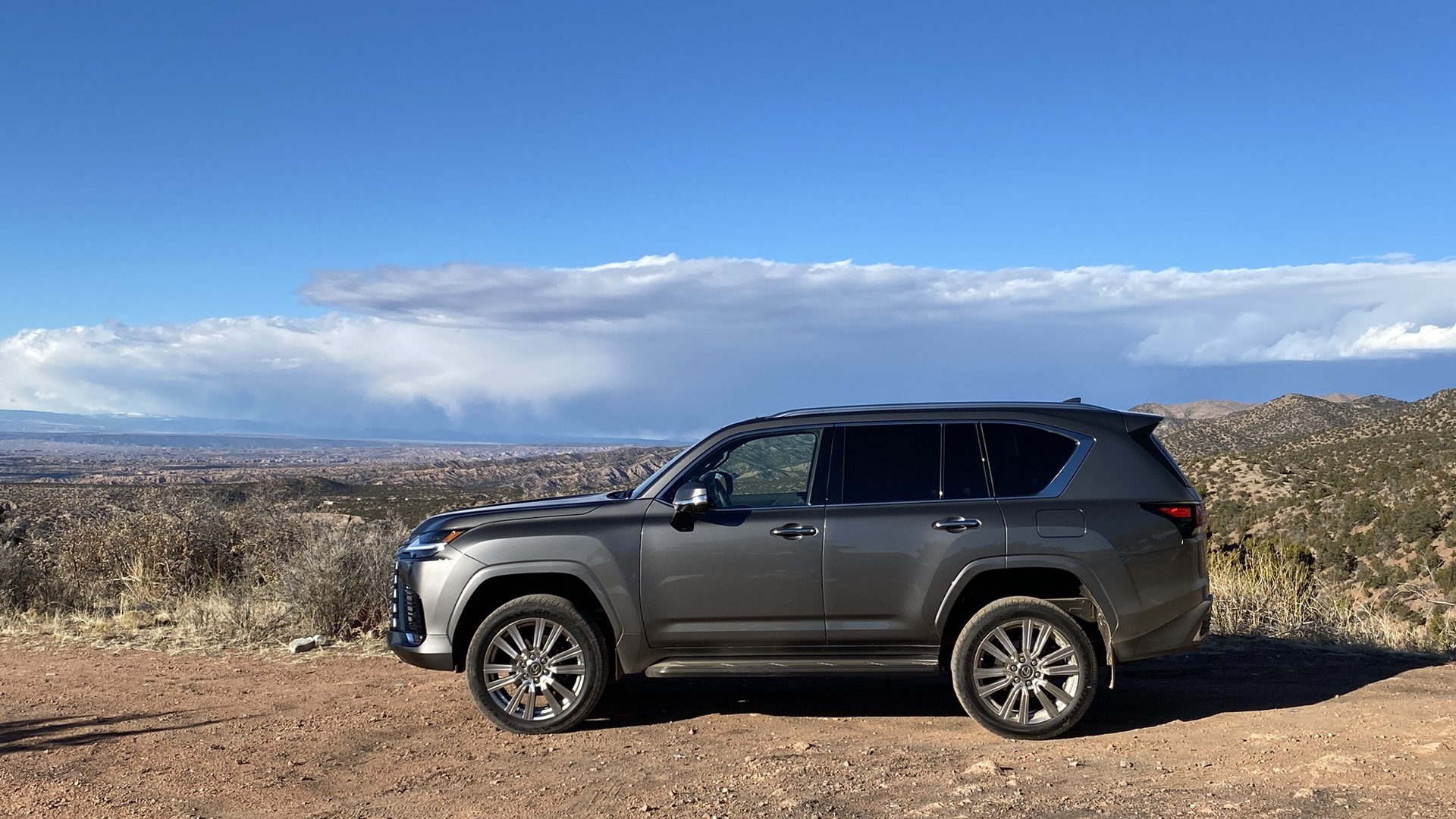 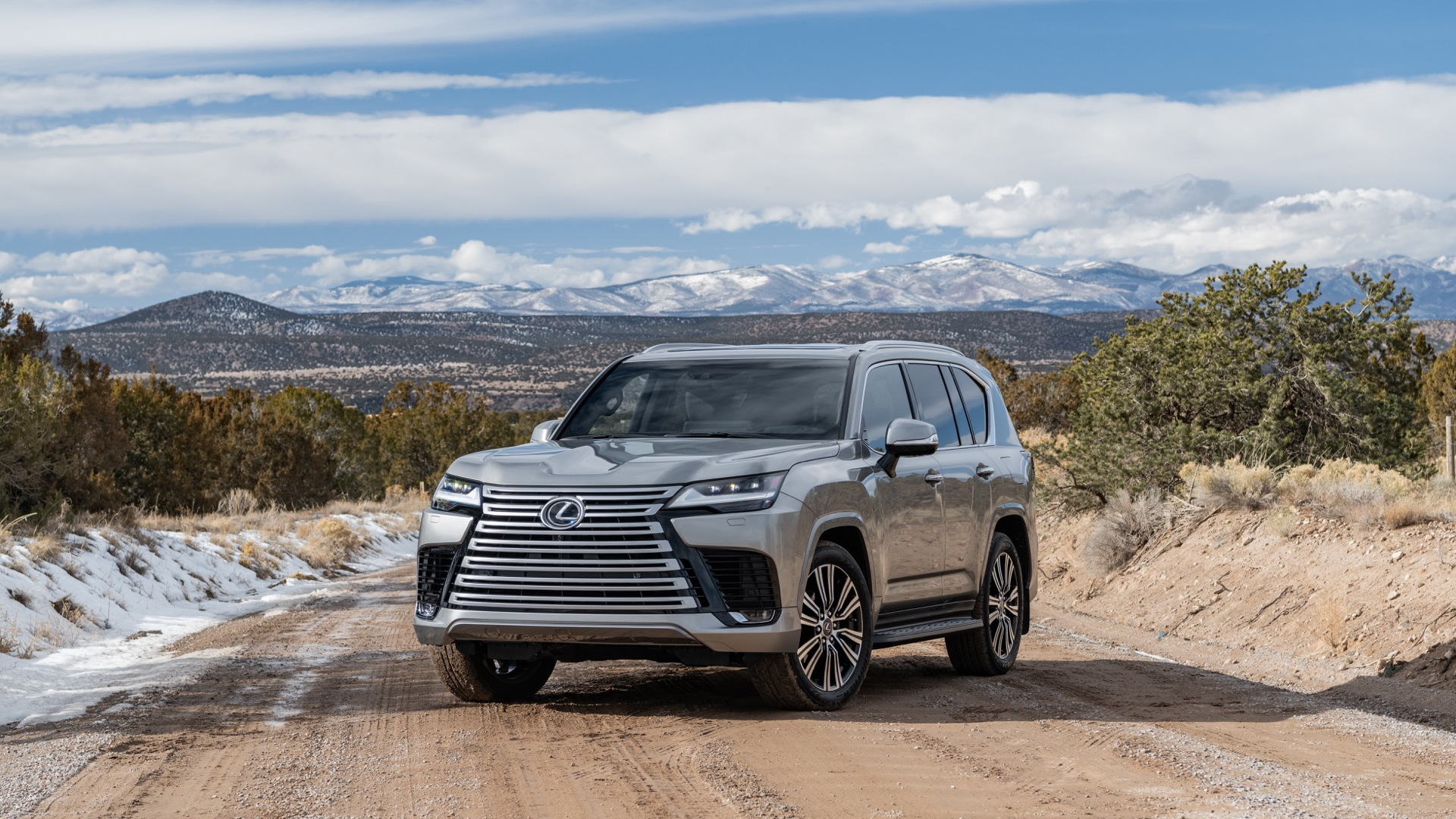 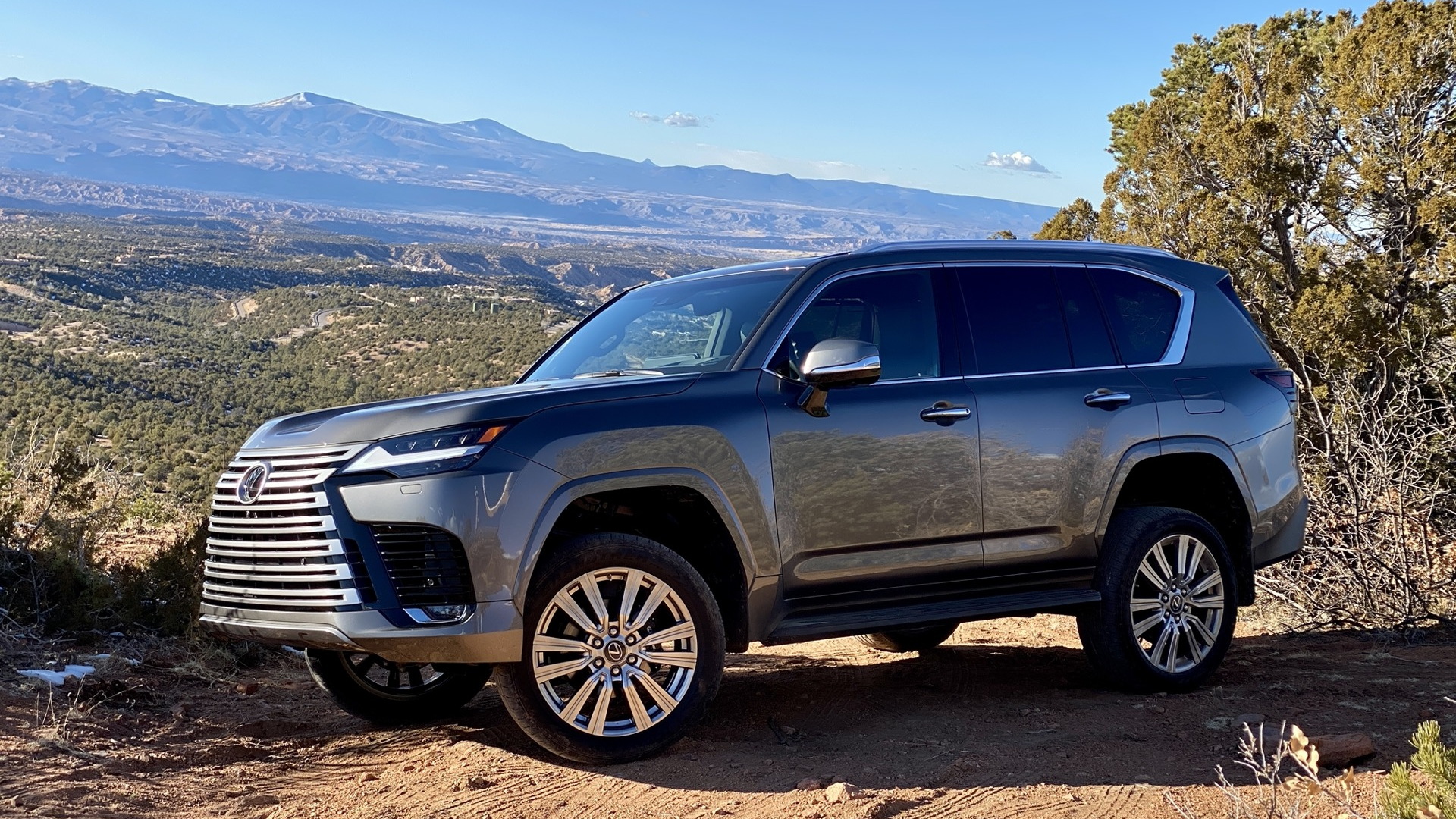 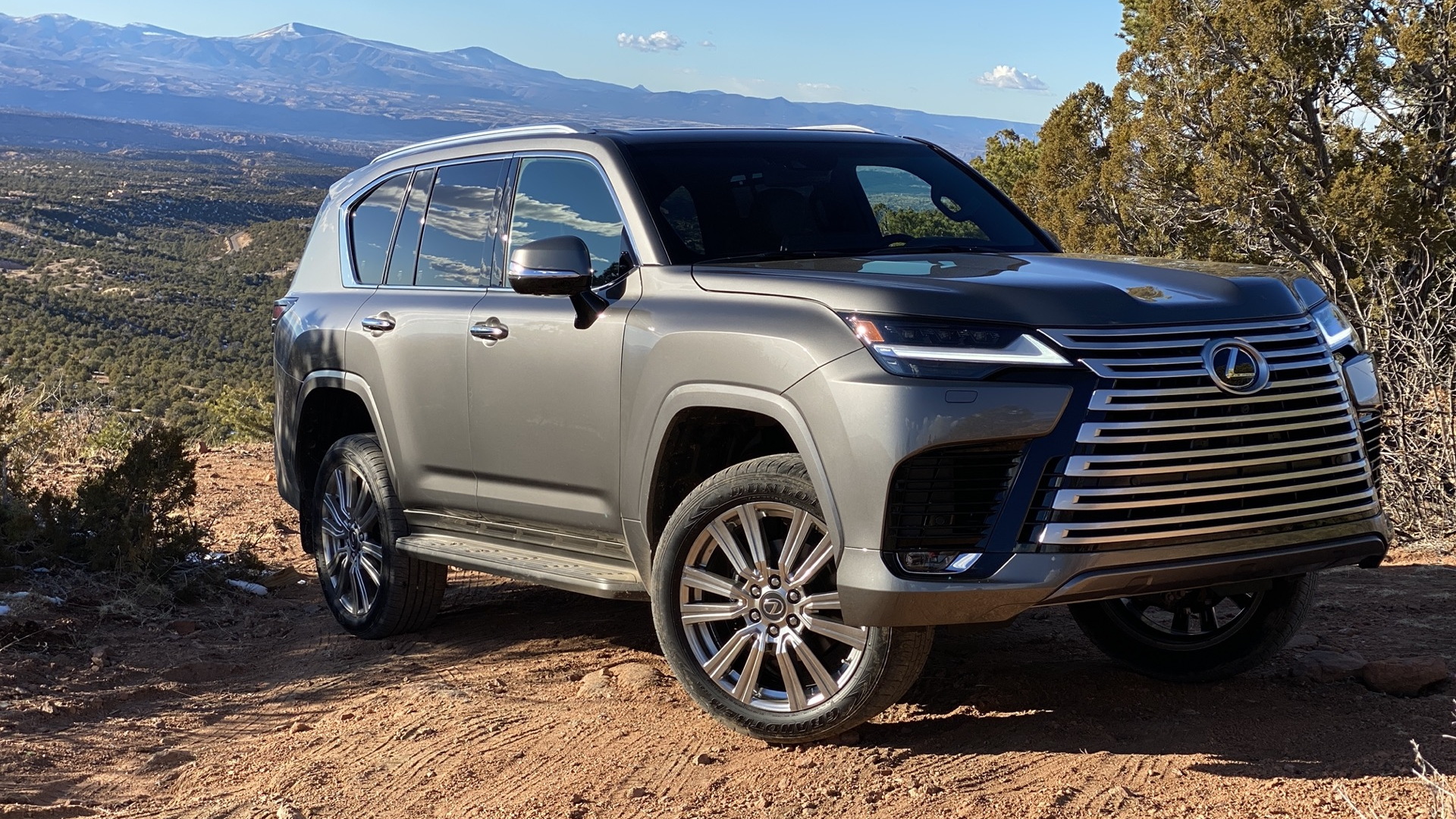 The surprising part of the redesigned 2022 Lexus LX 600 was the amount of fun I had behind the wheel. Serpentining past utility poles on a snowy dirt road in the high desert could be fun in any car, the full-size SUV turned it into beast mode.

The LX has always been off-road capable, and with a third row it can cram in seven passengers, but the brand’s largest vehicle historically has been more about comfort and feature-loaded luxury than fun.

In the mile-high plateaus beyond Santa Fe, New Mexico, however, it had me entertaining Jason Bourne-infused delusions of escaping from nefarious government operatives down back roads, before ultimately pulling into the school pickup lane, mud covered and battle worn.

“Hop in kids, and activate the massaging seats. My day was more fun than yours.”

It’s the kind of fun you’d expect from a vehicle that also replaces the Toyota Land Cruiser in North America.

The LX 600 moves much smaller than its 5,800-lb size. Lexus shaved 441 lb from its slabby sides thanks to aluminum doors and a shift to its new GA-F global platform shared with the redesigned 2022 Tundra pickup truck. The LX also shares the truck’s twin-turbo 3.5-liter V-6 and 10-speed automatic transmission.

The prodigious power and improved efficiency make it easy to forget the capable but thirsty outgoing 5.7-liter V-8. Output improves to 409 hp and 479 lb-ft (from 383 hp and 403 lb-ft), and despite some lag under a heavy foot, the LX 600 and its standard four-wheel-drive system scoot to 60 mph in 6.9 seconds, according to Lexus. Six drive modes ranging from Eco to Sport+ determine shift points and add or subtract weight to the steering. Roll into the throttle instead of hammering it and the seamless transmission apportions out the power just the way I wanted.

The new platform has 20% more torsional rigidity and the center of gravity drops for better stability. Lexus redesigned the suspension arms and moved the rear shock absorbers outside of the lower control arms, so the solid rear axle stays more planted, especially with the F Sport grade and its exclusive Torsen limited-slip rear differential.

On a three-mile dirt road that turned into five, then six miles, I turned the multi-terrain selector to “Sand” and locked the center differential on the fly because the trail was…unpredictable.

The Sangre de Cristo mountains are a subset of the Rockies, and that’s reflected by the terrain hovering near 8,000 feet above sea level. Sun-baked but forbidding, the trail was a mix of dirt and rock, with snow lurking in shaded areas and an occasional mud bath. Whipping around curves, the rear didn’t kick out like a truck. Lexus lengthened the suspension stroke by 0.8-inch and it didn’t come close to bottoming out or breaking one of my molars.

Prior to my unscripted jaunt, Lexus guided me up and down a weather-worn course to show off the LX 600’s new off-road tech. What wasn’t new was putting it in neutral and turning the dial from 4H to 4L. The transfer case dial sits at the bottom of the wide center stack, opposite the mode selector and separated by three buttons for off-roading, street driving, and crawling. Above that is a 7.0-inch touchscreen for climate controls that seemed redundant until it came to life in 4L.

The G-force meter became a pitch meter, and the brake and accelerator gauge lit up. When the wheels slipped, the on-screen diagram of the LX highlighted in yellow the slipping wheel. It also showed the suspension changes in models equipped with hydraulic springs.

Standard on the new Ultra Luxury grade and available on F Sport and Luxury trims, the hydraulic Active Height Control suspension uses a spring rate switch at the front and rear wheels to adjust the ride height in four settings. The standard 8.3 inches of ground clearance raises nearly two inches when switched to 4L, and about half that in 4H with the multi-terrain control switched to something other than Auto. When parked, it lowers below the standard ground clearance to make getting in and out easier, even with standard running boards. It’s not the most sophisticated system, and air springs on rivals such as the Jeep Grand Wagoneer do it better, but I’d trust this hydraulic system more in the long term. With or without the hydraulic springs, the LX 600 can ford 27.5 inches of water, same as the outgoing model.

Crowning the dash above the smaller screen is a 12.3-inch touchscreen with a volume knob. The standard surround-view camera system projects four cameras from the side mirrors, front and rear. In crawl mode at speeds under 7 mph, those views fill the large screen, and present a transparent view of what’s under or around the front axle.

Crawl mode has five settings that can be overridden with the brake or throttle, then return to automation when you let off the pedal input. It scrambled up the 30-degree pitch without a problem. At the hairiest part, a 45-degree turn pitching towards gnarly junipers, I touched the turn assist button on the smaller screen, and it locked the inside rear wheel, thereby cutting the turn radius to make it around the corner.

None of these technologies are cutting edge for the off-roading set, but they make the LX 600 better. They make off-roading almost too easy, which is great for the novice.

For comfort and convenience features, the larger touchscreen made in house by Toyota Motors North America is an evolutionary leap over its predecessor. The icon bar on the left is clear and obvious, wireless Apple Car Play and Android Auto come standard, and their icons appear at the top when toggling between the native system and your chosen app. The combination of dials and buttons complement the touchscreen, instead of being overwhelmed by it. The voice commands are great, but the native navigation once took me to an off ramp only to put me back on the on ramp. Lexus says the system is learning.

On the highway, the calm, quiet ride was almost as remarkable as the improvement in efficiency with the V-6. It has an EPA rating of 17 mpg city, 22 highway, 19 combined, which is not only better than the twin-turbo V-6 in the Lincoln Navigator, it’s 35% more efficient than the old V-8’s 12/16/14 mpg rating. And, it may follow the Tundra’s lead with a hybrid of its own.

Another notable change to the LX 600 comes in back, in the way back. The power-folding third-row seats in most models fold flat into the floor. They’re best like that, and help provide 44 cubic feet of space behind the second row. With them up, the third row is functional in a pinch or for short rides for two tweens at most, who at least get their own cupholders and USB ports.

The 2022 Lexus LX 600 starts at $88,245, including a $1,345 destination charge. Exclusive to the $$127,345 Ultra Luxury grade is a four-seat configuration with two rear captain’s chairs. A console with a 7.0-inch touchscreen replaces the middle seat and activates the massagers, recliners (up to 48 degrees), and power-folding ottomans in the front seat backs.

For kids and well-heeled others that might be fun. Until we go off-road in the high desert.

Lexus paid for lodging and airfare for Motor Authority to bring you this firsthand report.