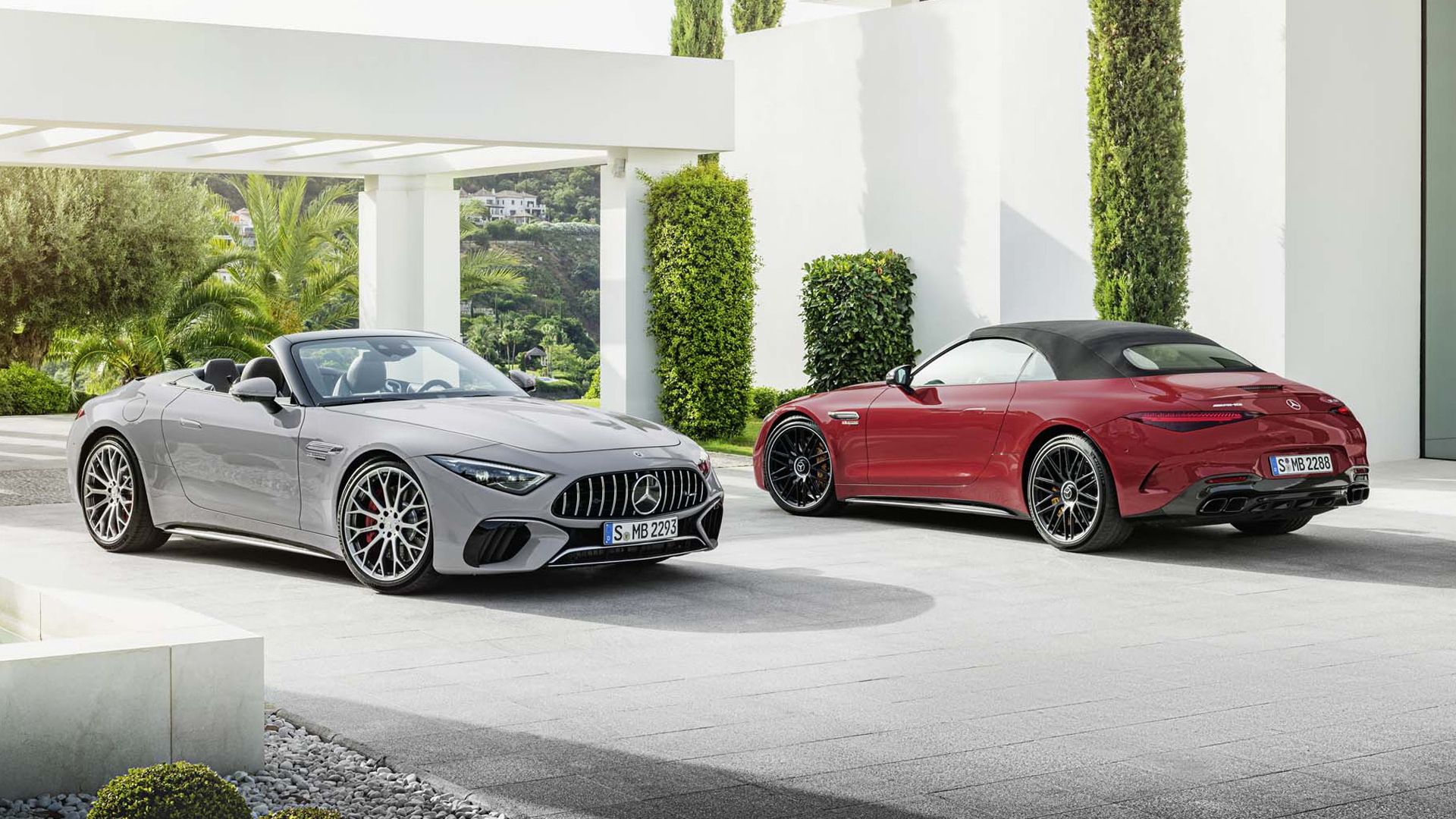 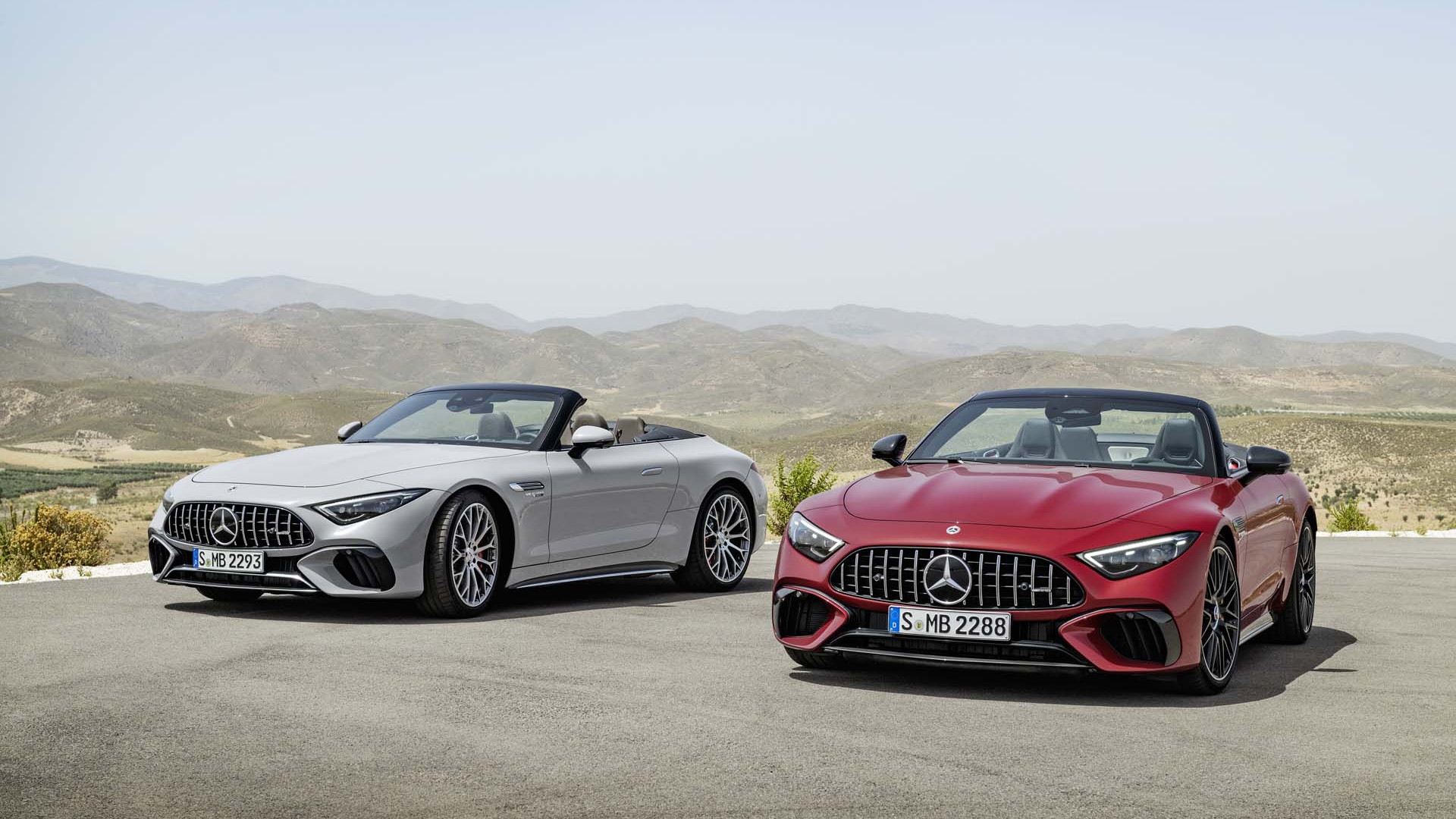 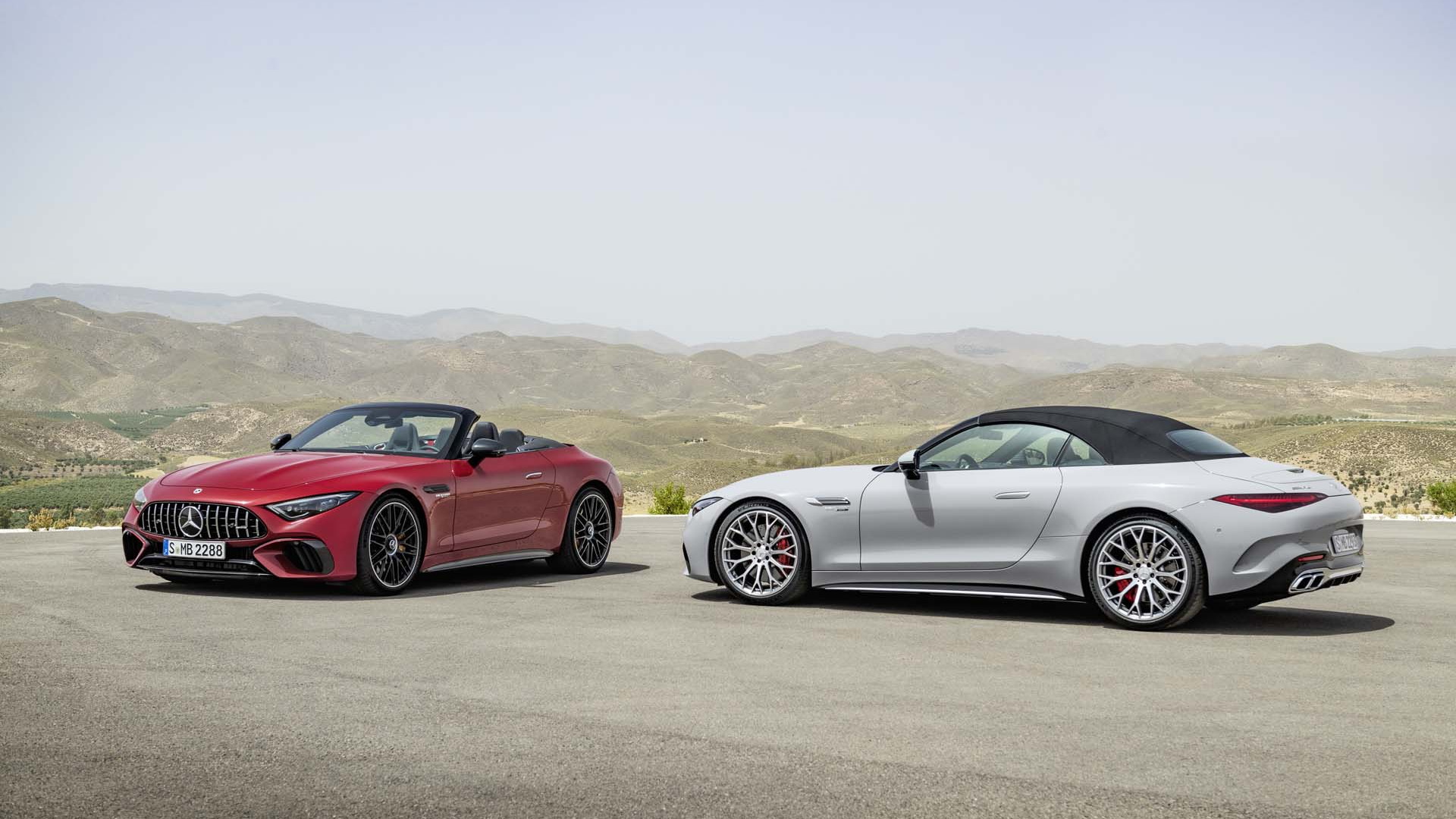 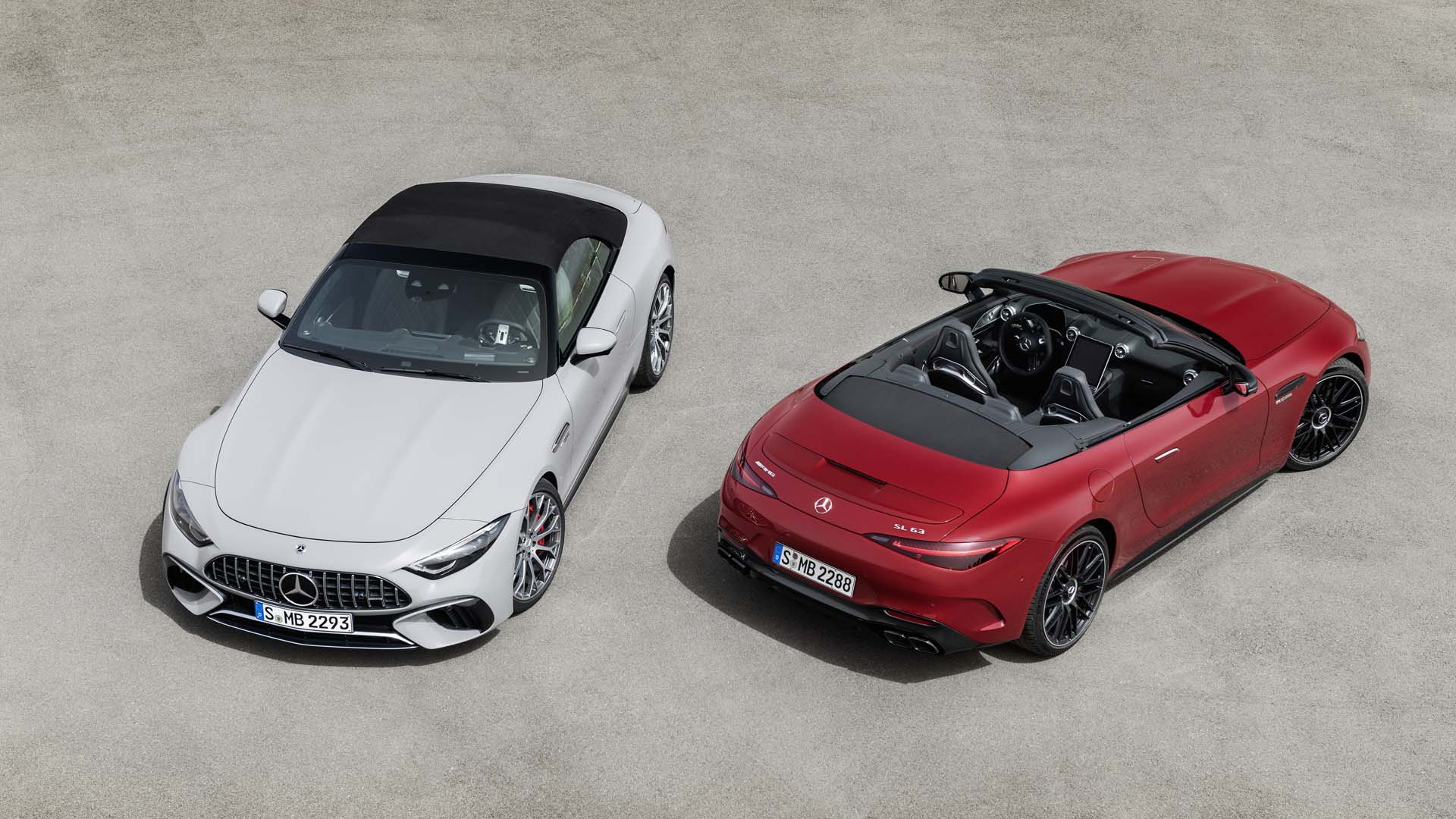 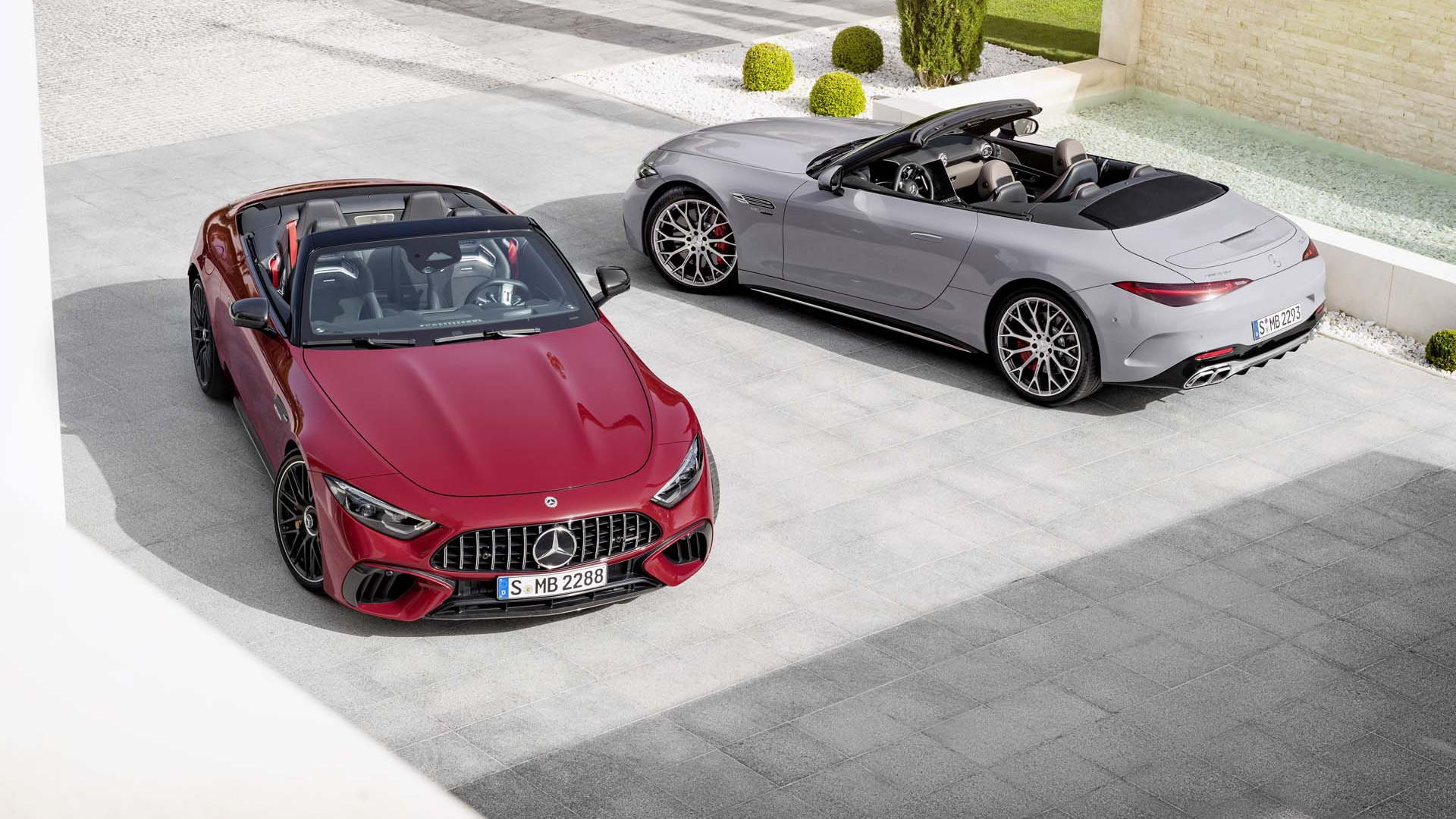 Mercedes-Benz on Thursday unveiled a new generation of its SL, the seventh generation in the sports car's lineage and the first to be developed by the Mercedes-Benz AMG performance division.

It arrives as a 2022 model in SL 55 and SL 63 grades, and we should see it at dealerships before next summer.

Both grades feature a 4.0-liter twin-turbocharged V-8 and 9-speed automatic transmission, as well as all-wheel steering and all-wheel drive. The familiar V-8 has received some tweaks for its application in the SL, like a new oil pan, new in intake and exhaust ducts, and repositioned intercoolers. Active engine mounts are also available for the SL 55 and standard in the SL 63.

The suspension consists of five-link designs at both ends, with forged aluminum used to help reduce weight. New to the SL is hydraulic roll stabilization, an available feature in the SL 55 and standard in the SL 63. Like in other vehicles, this system replaces the conventional mechanical anti-roll bars and is able to react to rolling movements in fractions of a second, helping to improve stability during hard cornering. The system also increases ride comfort when driving in a straight line or over bumps. An electronically controlled limited-slip differential also features in the new SL, as standard in the SL 63 and available in the SL 55.

The new SL is based on a newly developed platform completely unrelated to the platforms found in the outgoing SL, as well as AMG's own GT sports car. Referred to as the MSA (Modular Sports Architecture), the platform features space-frame construction relying on a mix of aluminum, magnesium and composites for the body shell, with thicker cast aluminum components used for nodal points where forces will be stronger.

Compared to the outgoing SL, AMG boasts increased torsional stiffness of 18% and a lower center of gravity. Transverse and longitudinal rigidity are also up 50% and 40%, respectively, over the current GT Roadster, which the new SL replaces. The weight of the body shell minus the doors, hood and trunk lid is 595 pounds.

You'll notice that the car has also done away with the retractable hard-top of the outgoing SL and gone with a soft-top instead—a move that saves 46 pounds. The fully automated, three-layer roof takes just 15 seconds to be raised or lowered, a process that can be done while traveling at speeds of up to 37 mph.

Another key change is a return to 2+2 seating, a configuration we haven't seen since the fourth-generation SL of the 1990s. But as is the case with most 2+2 sports cars, the rear seats are only suitable for small children, and even then things might be tight. In most cases, those seats will only serve as a nicely padded parcel shelf.

A head-up display also features in the new SL (available in the SL 55 and standard in the SL 63). It uses augmented reality to display relevant cues and actions three-dimensionally in the real driving situation and surroundings. Other goodies include neck-level heating, Burmester audio, surround-view camera monitoring, and AMG sport seats with electric adjustment and massage functions. Multiple electronic driver-assist features are also included, including Mercedes' advanced vehicle-to-infrastructure warning system.

Production of the new SL is being handled at Mercedes' plant in Bremen, Germany, where the outgoing car was built.

Pricing information will be announced closer to next year's market launch.

For more on the SL, read the in-depth reviews at The Car Connection.