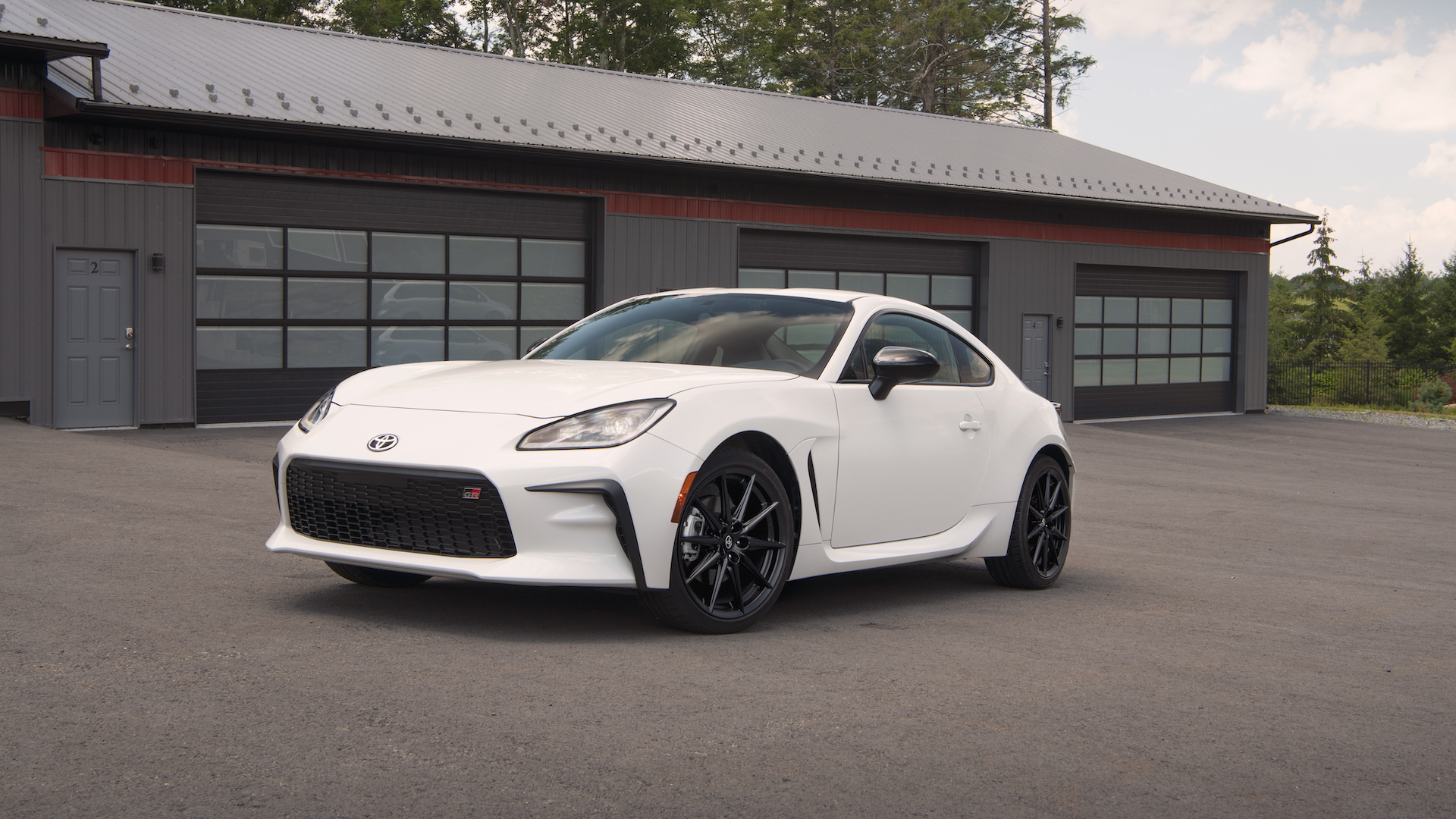 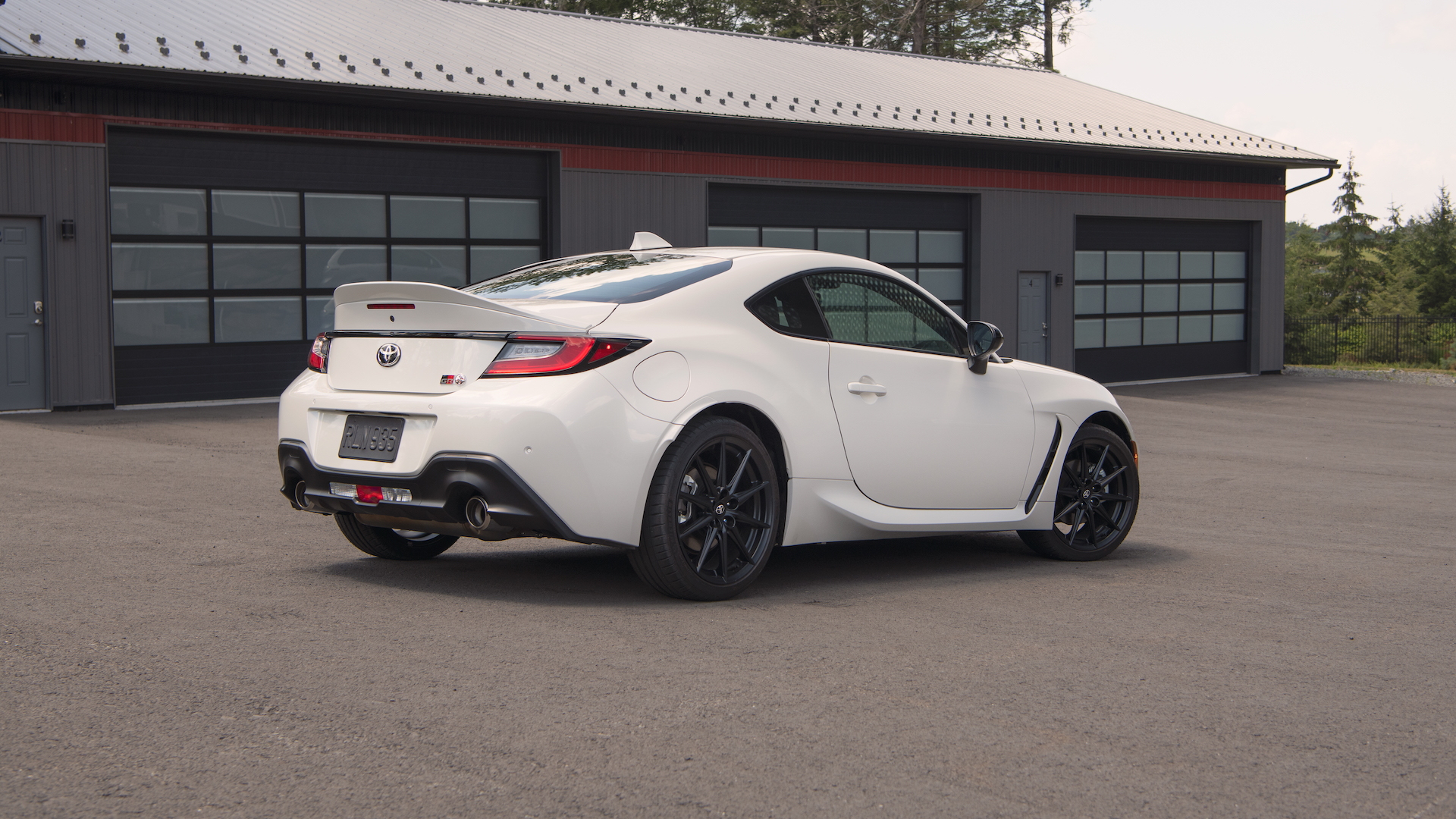 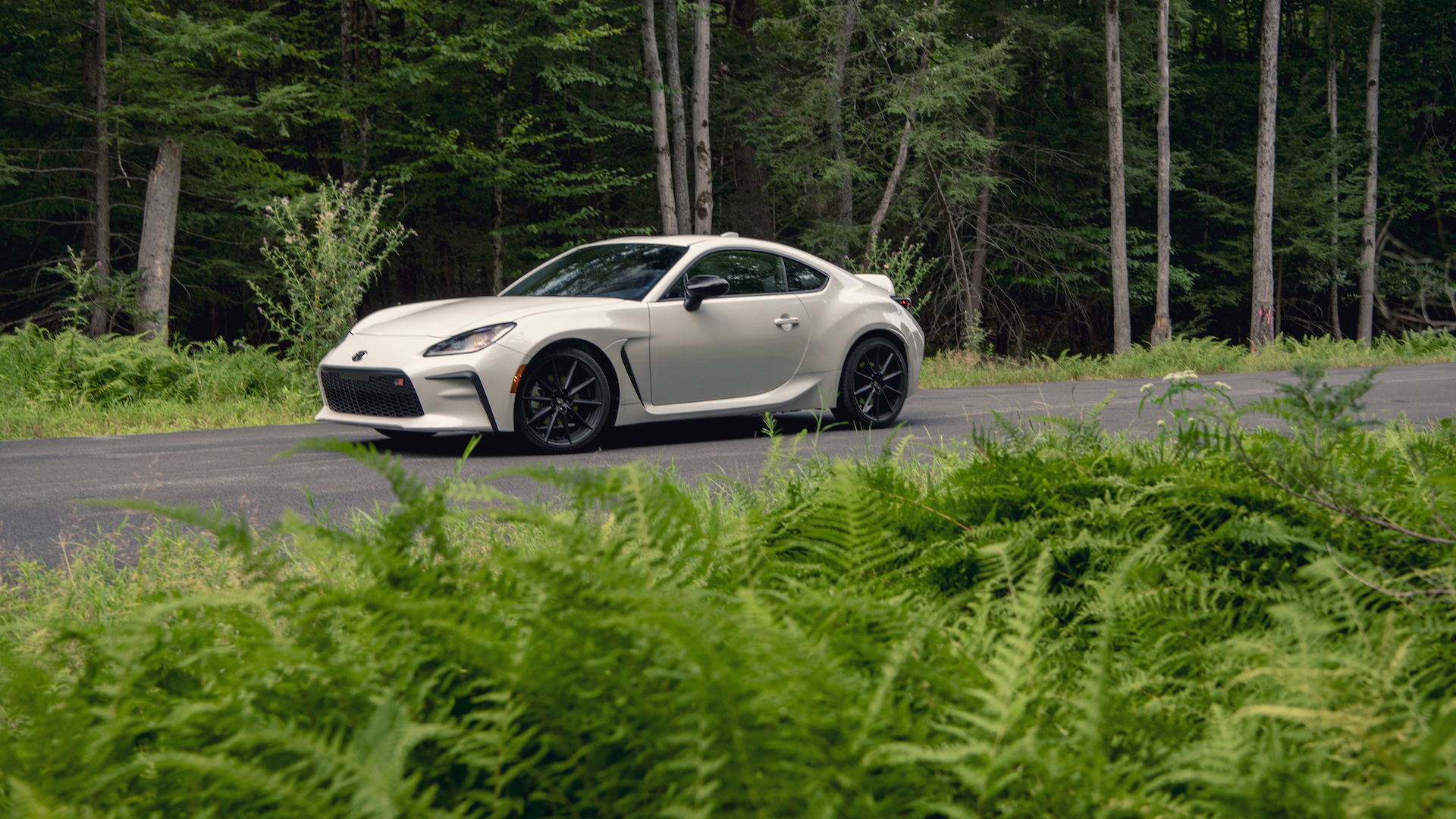 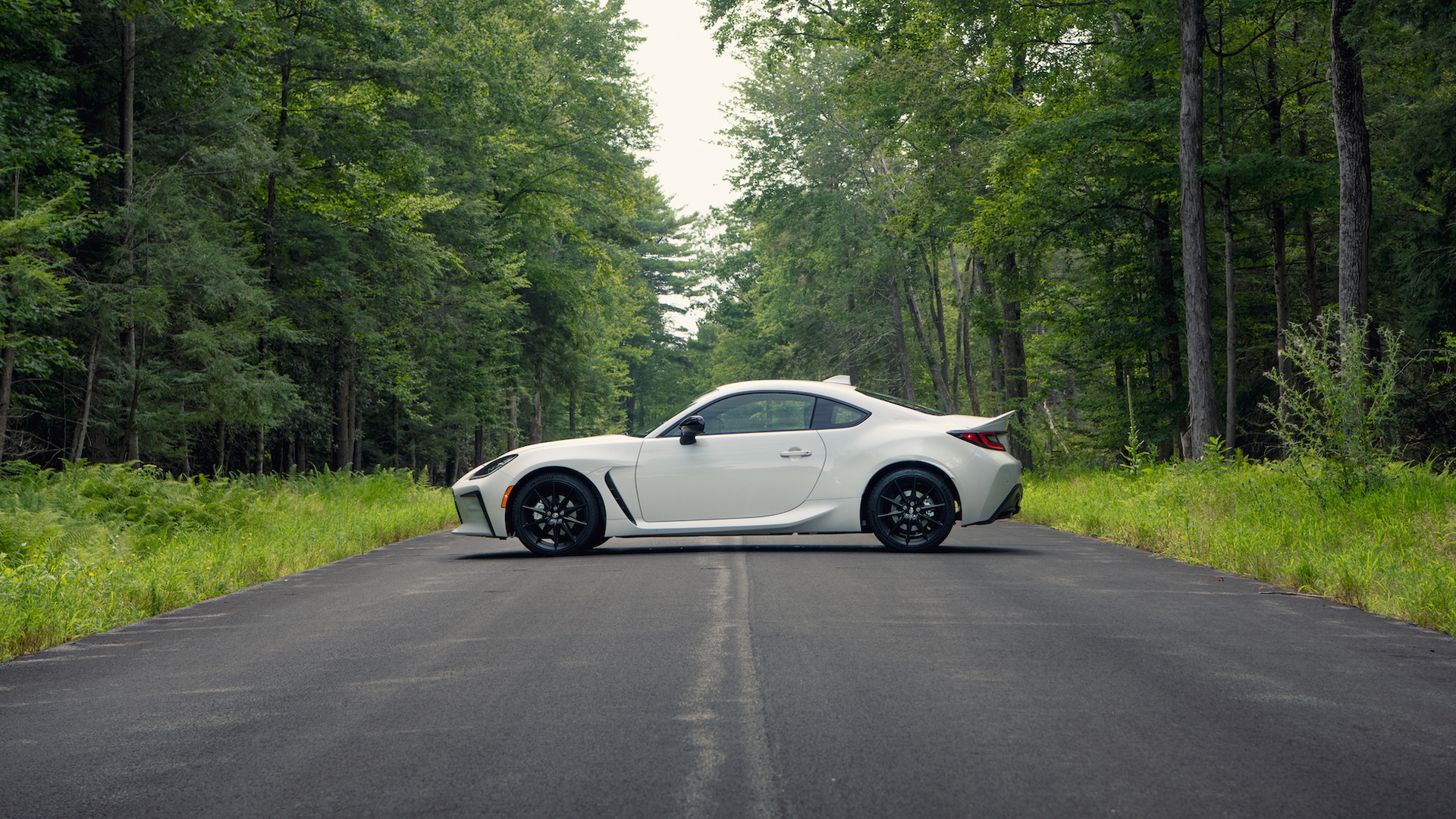 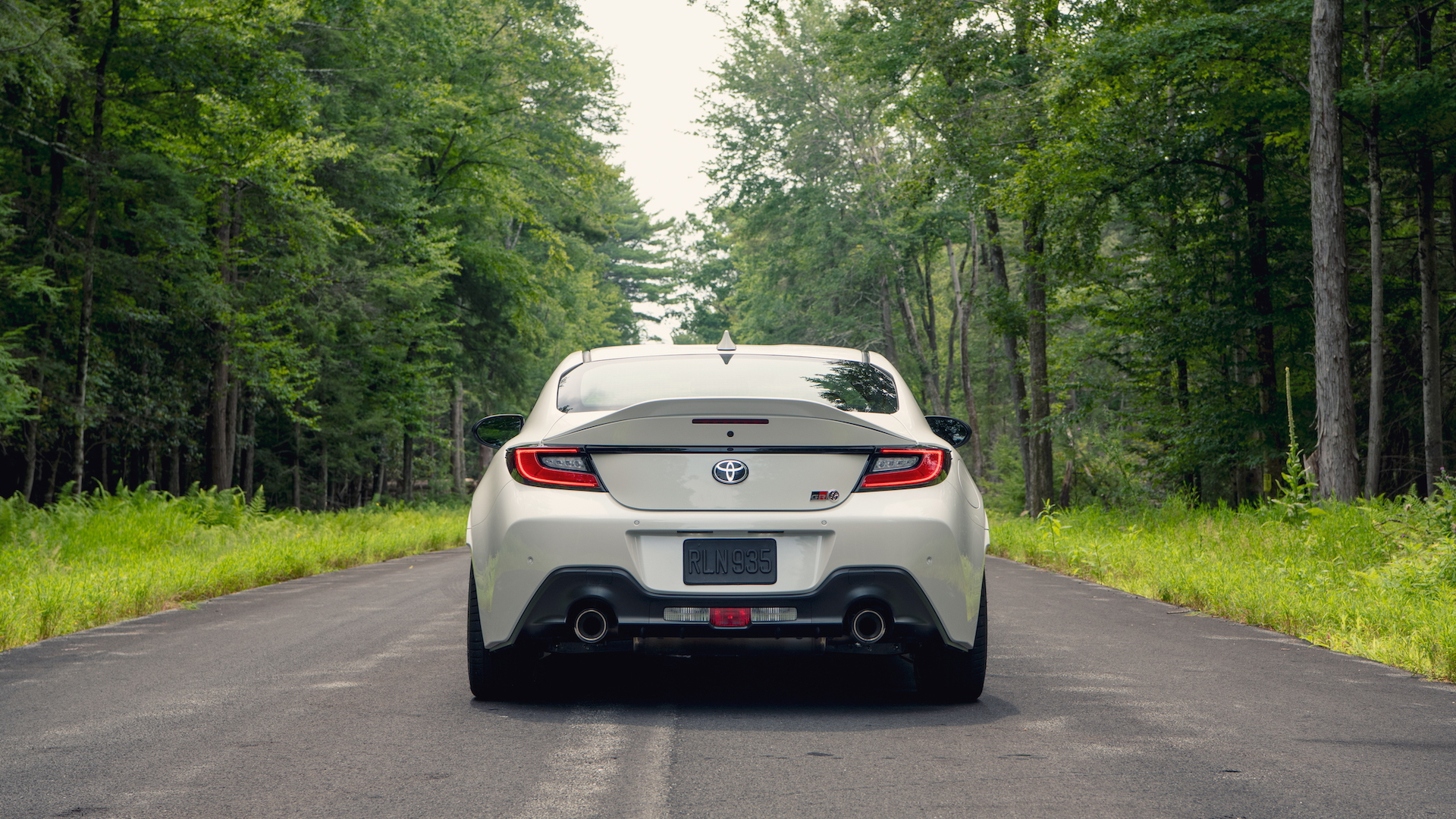 Training wheels may sound like a backhanded compliment, but the 2022 Toyota GR86 teaches untrained track drivers all the basics, even those quickly fading from style.

With a manual transmission, rear-wheel drive, and the ability to turn off its traction systems to the mildest of nanny modes, it’s a better way to learn how to clip apexes and dust through esses than anything of its kind. Fact is, there isn’t much of its kind for sale anymore, anyway, unless you count the nearly identical Subaru BRZ (which we’ll drive in the next couple of weeks).

It’s not changed significantly since the '20 edition, which means this year’s recharged 86 remains cheap enough to clap out and wad up, while it still can blend into the ranks of employee parking in blessed anonymity.

Toyota rented out upstate New York’s Monticello Motor Club and let me cycle through base and Premium 86s, with manual and automatic transmissions. Though it coned off the long back straight that lets some cars build to screeching, tire- and brake-consuming speeds, it didn’t shave down any of the 86’s essential goodness. For track beginners and aficionados, the 86 still earns its spot on the end cap of the adult track-toys aisle.

It’s somewhat new, signified by a two-letter prefix. The “GR” badging alters the name as subtly as the mechanical changes; it’s now the GR86, a tip of the ballcap to the same Gazoo Racing that’s charged with social-distancing the Supra from its BMW roots.

Toyota has refurbished the car’s thin low-end torque with a new engine, but has left explosive power for another day, and for another tuner. A new 2.4-liter flat-4 replaces the outgoing model's 2.0-liter flat-4, but the 86 retains rear-wheel drive and available 6-speed or automatic transmissions. The automatic now has adaptive controls that sense the brake and throttle positions to provide the best gear for the situation.

So updated, the 2022 86 (is it a name, or a high school locker combination?) still rings out a filthy squall, as we said of the last-gen flat-4 in the short-lived Hakone edition. It’s a rackety clacket that would turn off anyone who’d look to it as a commuter-car alternative.

That’d be lunacy. What matters is how that din translates into better power out of corners. Toyota says this flat-4 puts out peak torque at 3,700 rpm versus the old engine’s 6,700-rpm peak, and it’s readily obvious in Monticello’s snakier passages. Instead of falling into a torqueless valley in hairpin kinks, the 86 gathers itself more quickly and requires fewer downshifts.

Shorn of its longest and highest-speed stretch by those damned cones, the 86 renders this version of this track a third-gear party, with occasional blips into second and fourth. It’s as pro drifter Ken Gushi promised in our ride-along earlier this year: more readily available torque keeps the 86 on boil and gives it a leg up on the exit from the corner.

Monticello’s most maddening loops push the 86 to its extremes, and that’s where Toyota’s polish-and-buff work has paid off most handsomely. Still riding on a front strut and rear multi-link suspension, with remapped electronic power steering and four-wheel vented disc brakes, the 2022 GR86 chucks me at the shoulders with oversteer like an old friend. No sneak attacks, no need for a restraining order.

Toyota engineers honed the 86’s inputs for sharper response. It’s clearer than the graying sky over the track, as I rotate through base 86s that ride on drift-worthy 215/45R17 Michelin Primacy HP tires. It’s easy to use up their grip, particularly on the off-camber downhill turn that leads back to Monticello’s pit lane. They sing, they telegraph, they tell a story about how the car will slip sideways without steering correction. That’s made more pure, too, by retuned steering and better bushings that do an even better job of instructing drivers on the exact terrain of the GR86’s cornering limits.

It’s tougher to remap my brain, after 16 months without track time. I’m rusty, and my feet are too wide to dance on pedals with a lot of stagger. There will be no minuets today, as I try to dance around the brake and gas to slip the slick 6-speed manual through its cogs. More than once, the 86 beeps for mercy and screams a redline wail—but it doesn’t snap into an angry mood. It shows you don’t need rev-matching or traction control if you have the basics down; it refuses to launder bad skills through the electronic masks available elsewhere.

I’m better with the automatic—everyone and anyone would be, and should be—as I slap it sideways into its manual-shift mode, and point and shoot through corners. The brakes help calm the few ripples in the 86’s eager demeanor; they’re not particularly numb or sharp, but they brush off speed efficiently and settle the car into long sweepers.

The automatic doesn’t like to let the engine reach full bore, and when you try to hit redline it rings and dings and denies the shift. Still, it’s best kept in manual mode and flipped through the gear range with paddles,

Buy the automatic if you intend to drive the GR86 mostly on open roads, if only for the safety gear it gets that manual cars do not (automatic emergency braking, for starters). It’s fine, but switching back into a Premium car with the 6-speed manual and 215/40R18 Michelin Pilot Sport 4 tires reveals the car Toyota engineers want everyone to track, every weekend. It has the extra grip that encourages deep and late braking. That builds confidence, and though my feet still klutz it up once or twice, the training wheels eventually bring me to a smooth-shifting, single-lap Monticello blitz before it’s all done. It’s really good as an automatic; as a manual, the GR86 is the senior-year achievement test that places you in graduate school (Supra, and higher).

You’re forgiven if you miss the other changes wrought with the 2022 Toyota GR86. It gets the same styling changes as the related 2022 Subaru BRZ, including functional side air intakes that Toyota claims improve steering stability. It’s still a 2,811-lb lightweight, still has a nearly unusable back seat and trunk—and still lets you slip a set of wheels and tires in back once the seatback’s folded.

Prices were released in October, and the GR86 starts at $28,695 with the manual transmission and $30,195 for the automatic. The base model comes standard with a 7.0-inch digital display in the instrument cluster, an 8.0-inch touchscreen with Apple CarPlay and Android, a six-speaker audio system, a Torsen limited-slip rear differential, and LED headlights. Premium models, which run $31,295 with the manual and $32,795 with the automatic, get eight speakers, leather and Alcantara seats, and a rear spoiler.

Stiffer and better sorted than a Miata or a Mustang, the 86 has the lesson plans first-time drifters and track drivers need. It also comes with a bonus: a one-year membership to the National Auto Sport Association and instruction at a high-performance driving event. A free training day for some of the best training wheels we know? That’s a great idea for any driver who aspires to something more than cruising from stoplight to stoplight.

Toyota paid for hotel expenses so that we could bring you this first drive review.