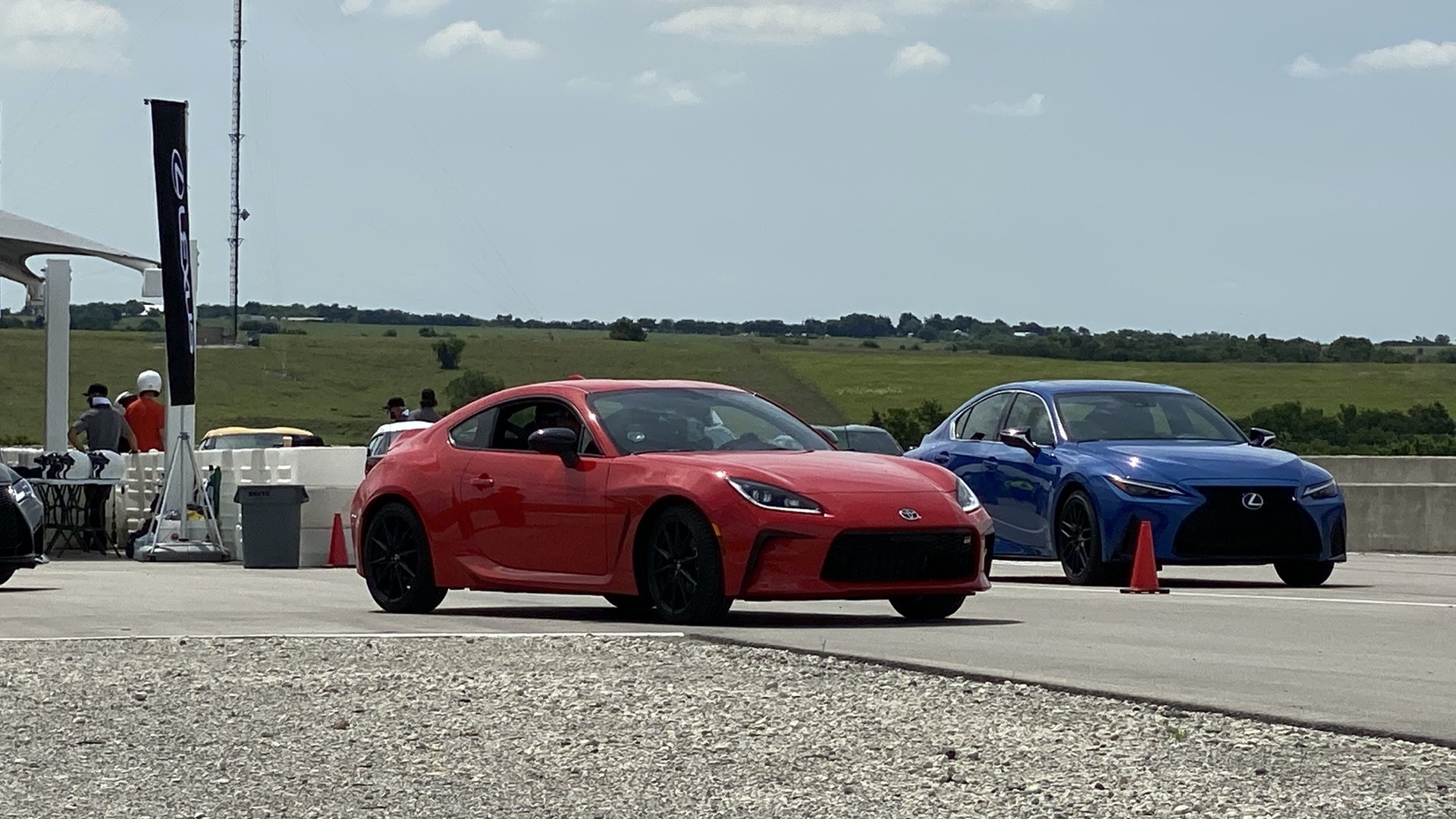 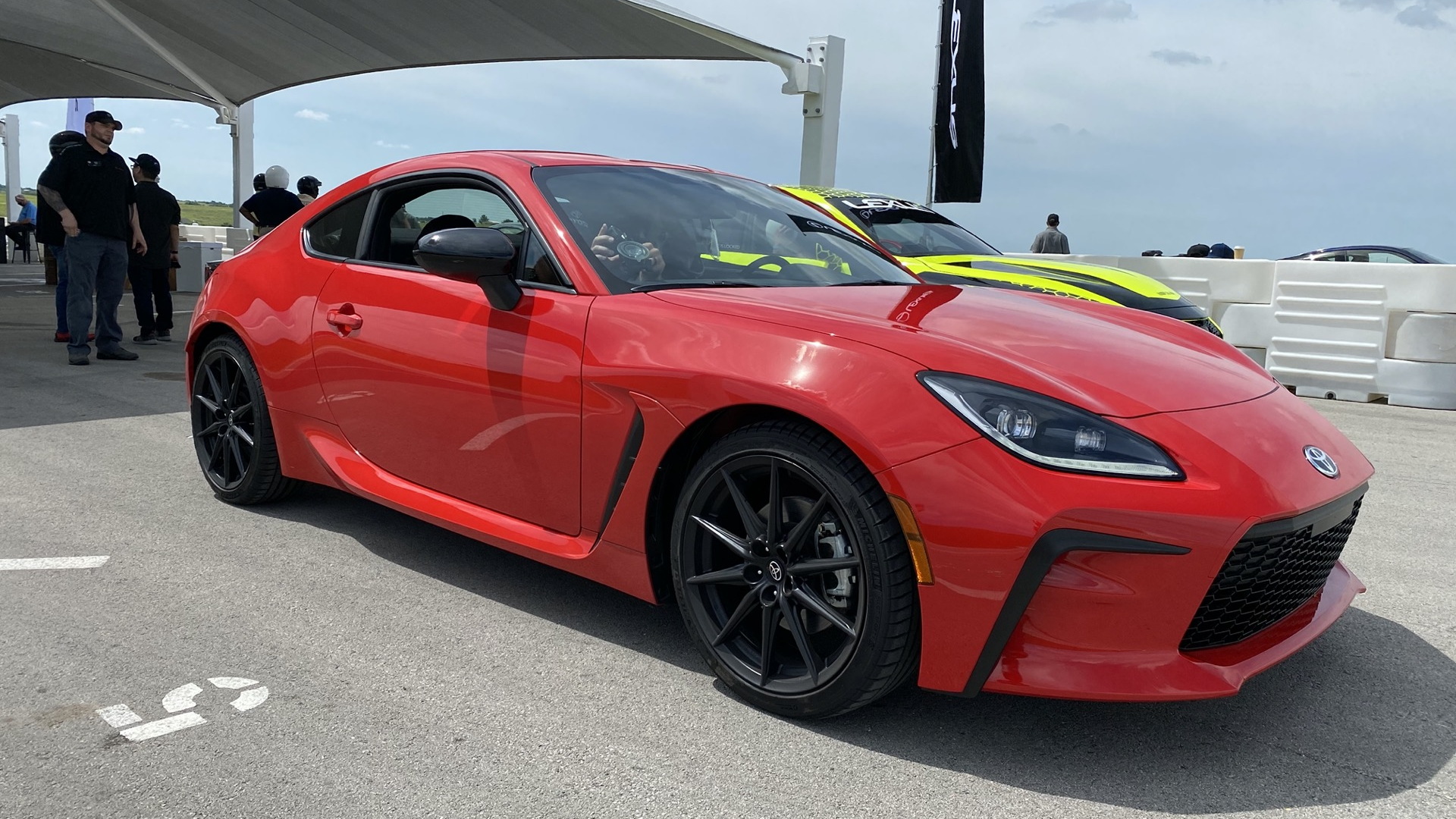 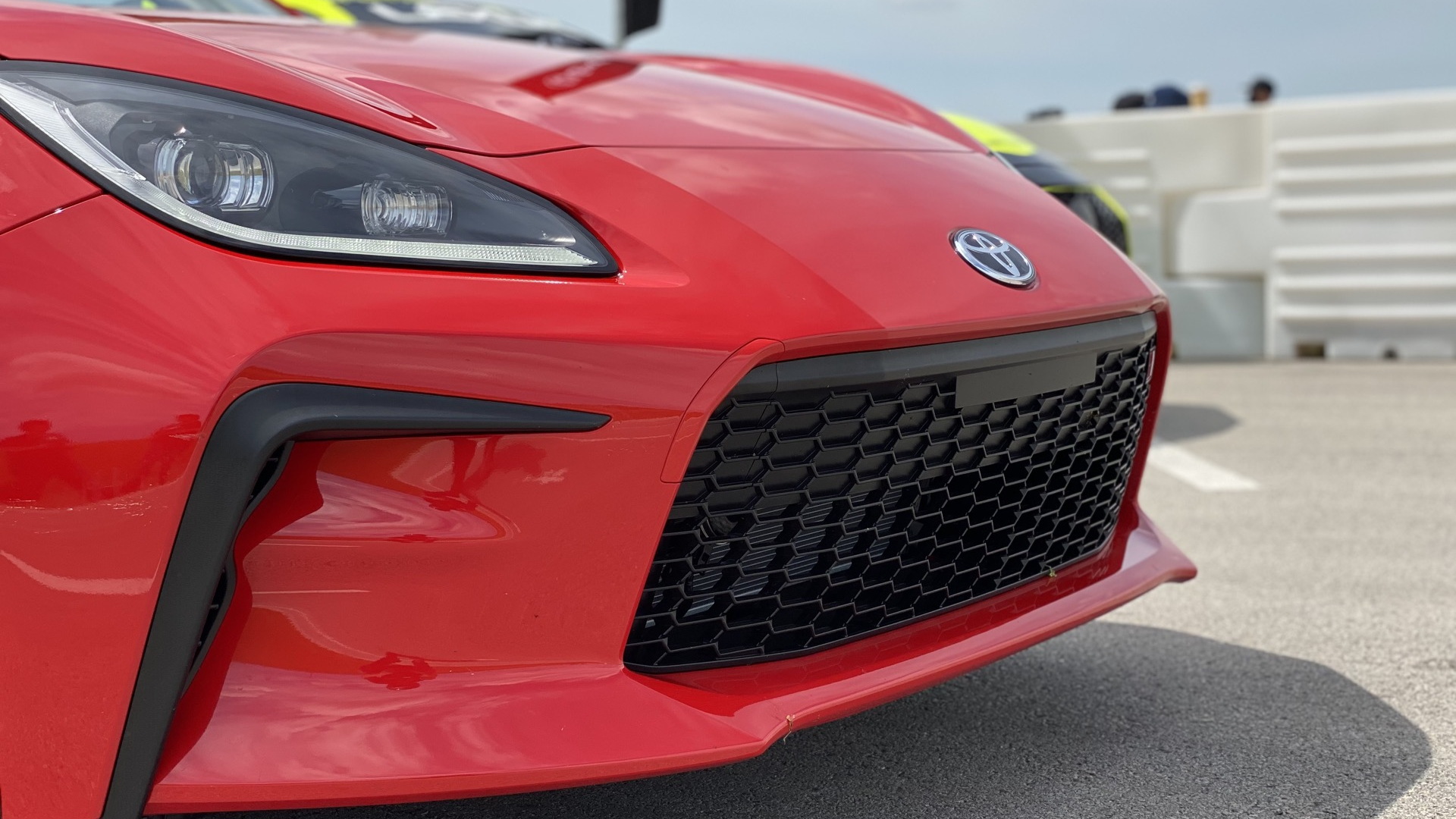 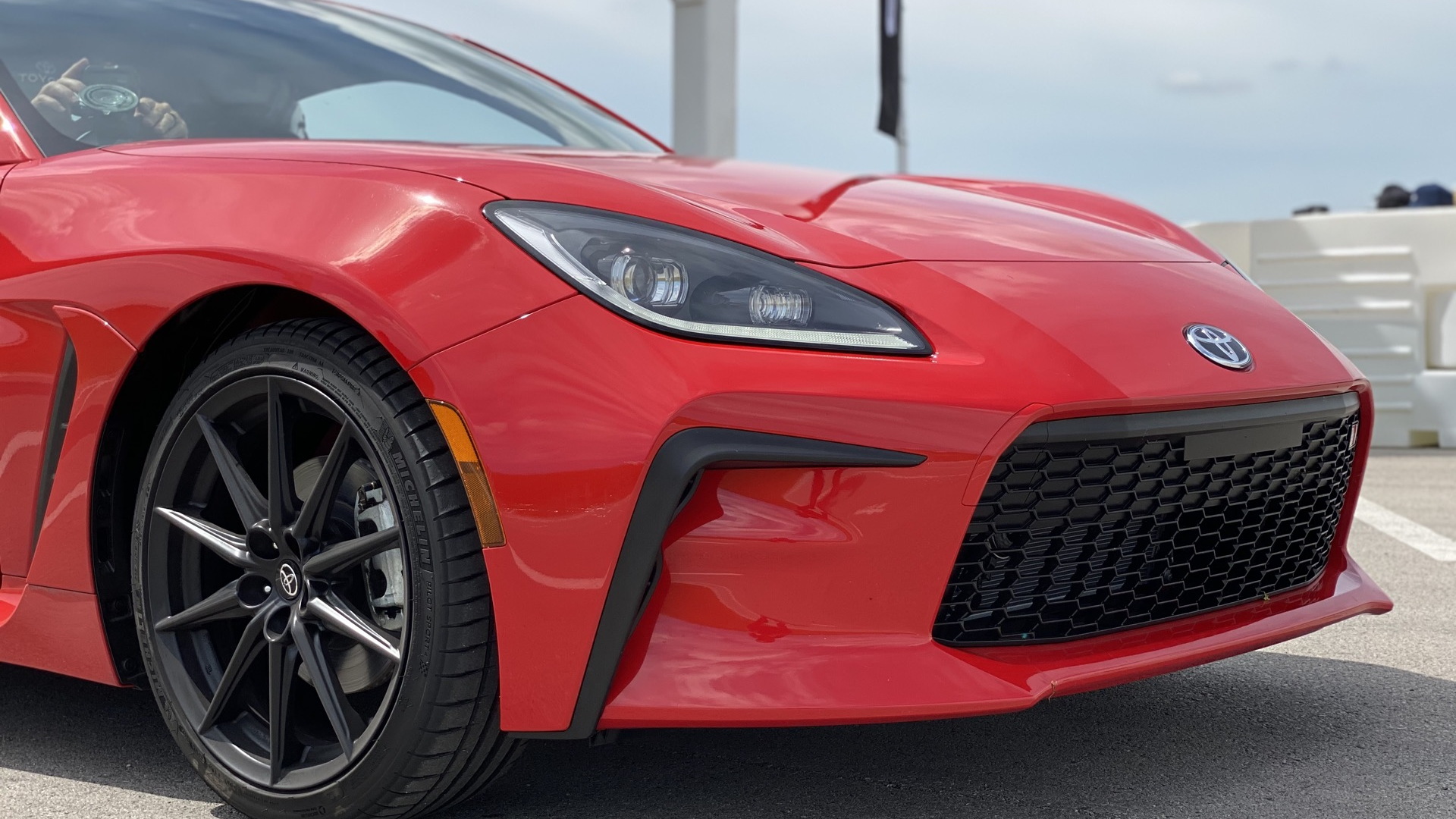 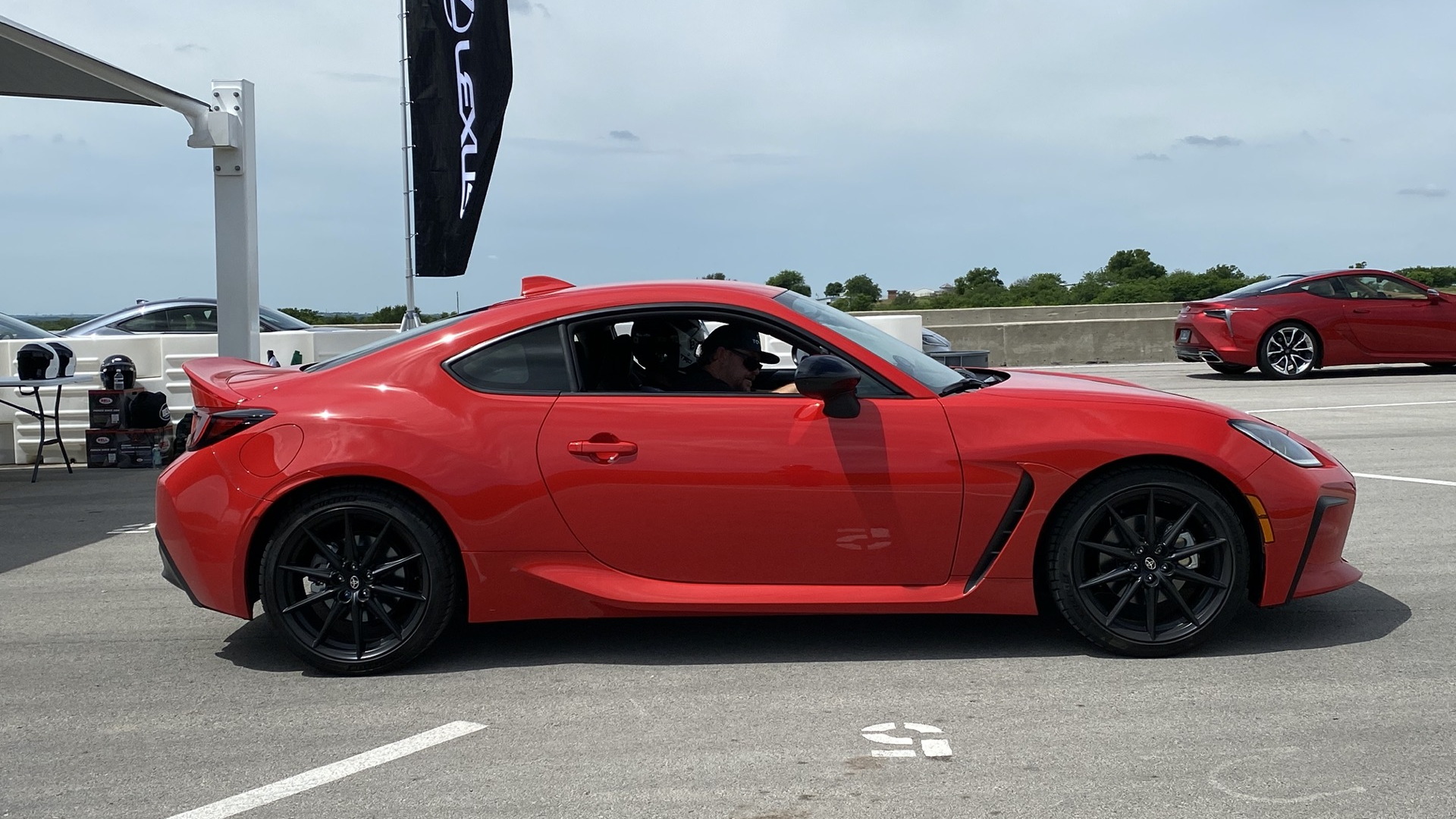 The 2022 Toyota 86 approaches the first turn at Eagles Canyon Raceway in Decatur, Texas, with a high-pitched wail. The straight shot from the starting block seemed to hit 62 mph quicker than Toyota’s quoted time of 6.1 seconds. But it’s more the 90-degree right turn into the 90-degree left that make me appreciate the handling and suspension upgrades to the redesigned 86.

Pro drifter Ken Gushi keeps the 6-speed manual in third gear through both turns, and as the front-engine, rear-drive sports coupe starts to wag its tail he snaps it back to rotate into the next turn. It’s perfectly executed, and demonstrates the track-ready capability of the 86 in the hands of a pro racer for Toyota Gazoo Racing; that’s what puts the GR in the 86.

“There’ve been a lot of small subtle changes with this vehicle that makes it feel like a completely different car,” Gushi says as he climbs a hill into the blind turn 3.

The more readily available torque helps maintain speed in those two turns without losing time to a downshift, then sprinting out of corner exits. Up the hill before the blind turn, we’re approaching triple digits.

He’s speaking as calmly as you’re reading this sentence, and I’m riding shotgun for a second time, you know, to get the story straight.

Turn 3 consists of two smaller turns on the top of the hill, then a hard right downhill. This is one of the tricky up-downs on a track with 200 feet of elevation change. At the bottom of the hill, the track bends about 60 degrees back up hill. The layout has us carrying all this speed into the curbing laterally, then braking hard so all the weight moves forward. In an instant, at the nadir, the 86 has to do the opposite.

Earlier, in several laps driving the 2021 Toyota Supra and 2021 Lexus LC500, this was the hardest part of the track for me to maintain speed. Though, Gushi’s a pro, and I’m not.

The body’s 50% increase in structural rigidity helps him flick off that weight change like a bead of sweat and we’re climbing again. He’s still in third as the car crests into the horseshoe. The rigidity up front comes, in part, from diagonal bars that tie the subframe to the frame, and the slightly lower height and increased rigidity in the rear helps it stay planted. The same MacPherson strut front and double-wishbone rear suspension let him hit the curbing in the horseshoe and keep on keeping on, with me giggling in lockstep with the rumbling tires.

The horseshoe kinks downhill before a hard 90-degree turn. It’s nuanced and tricky. In Gushi’s hands, the revised electronic power steering on the 2022 Toyota 86 shines.

“The EPS has been improved quite drastically, so the steering feels tighter and more precise,” he says while twisting through the notch and bending it into the turn. “It’s very predictable, you know exactly where the wheels are pointed as you enter the corner, mid corner, exit corner.”

Improved bushings that attach the steering rack to the crossmember help, Gushi says, and the revised power steering system is quicker, more compact, lighter, and lower to the ground.

“The engineers did a fantastic job trying to work little things here and there, as small as bringing the license plate lower from the trunk to the bottom of the bumper,” he says as we hit the straight and he shifts it into fourth—the first shift since the first turn. There’s been no need to downshift to keep it in the powerband. “Small details like that add up.”

Another subtle change is the design of the side air intakes, meant to reduce turbulence in the wheelhouse. It all seems to work and the 86 appears faultless when Gushi’s driving. Drivers of all abilities, however, should be able to appreciate its essence.

“They kept the DNA and soul of a true driver’s car,” Gushi says as we cool off into the pits. “The harder you push, the more rewarding it becomes.”

We look forward to thrashing it and humbling ourselves later this summer.

Toyota provided Ken Gushi, bbq, and lodging for Motor Authority to bring you this first-hand report.