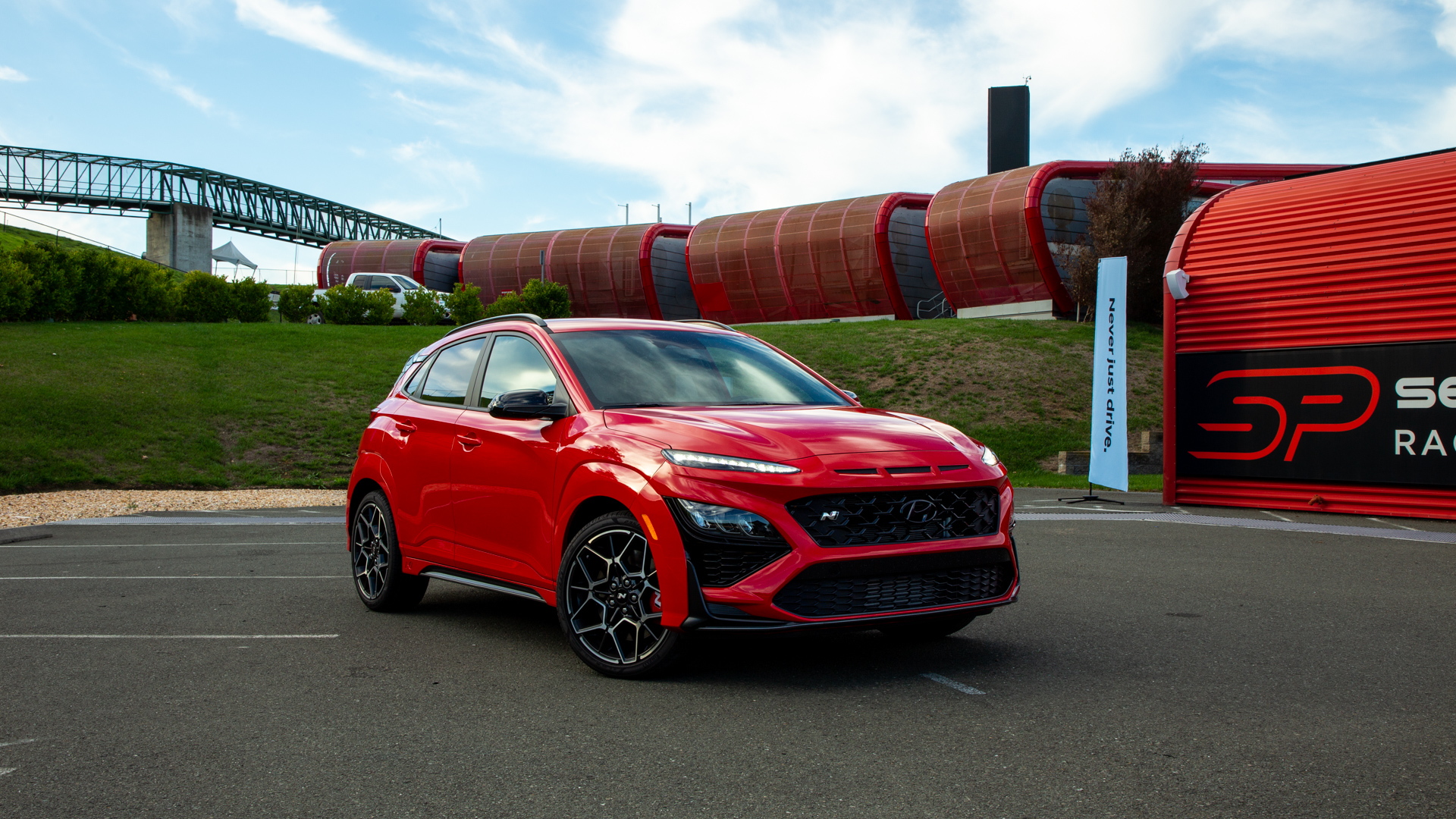 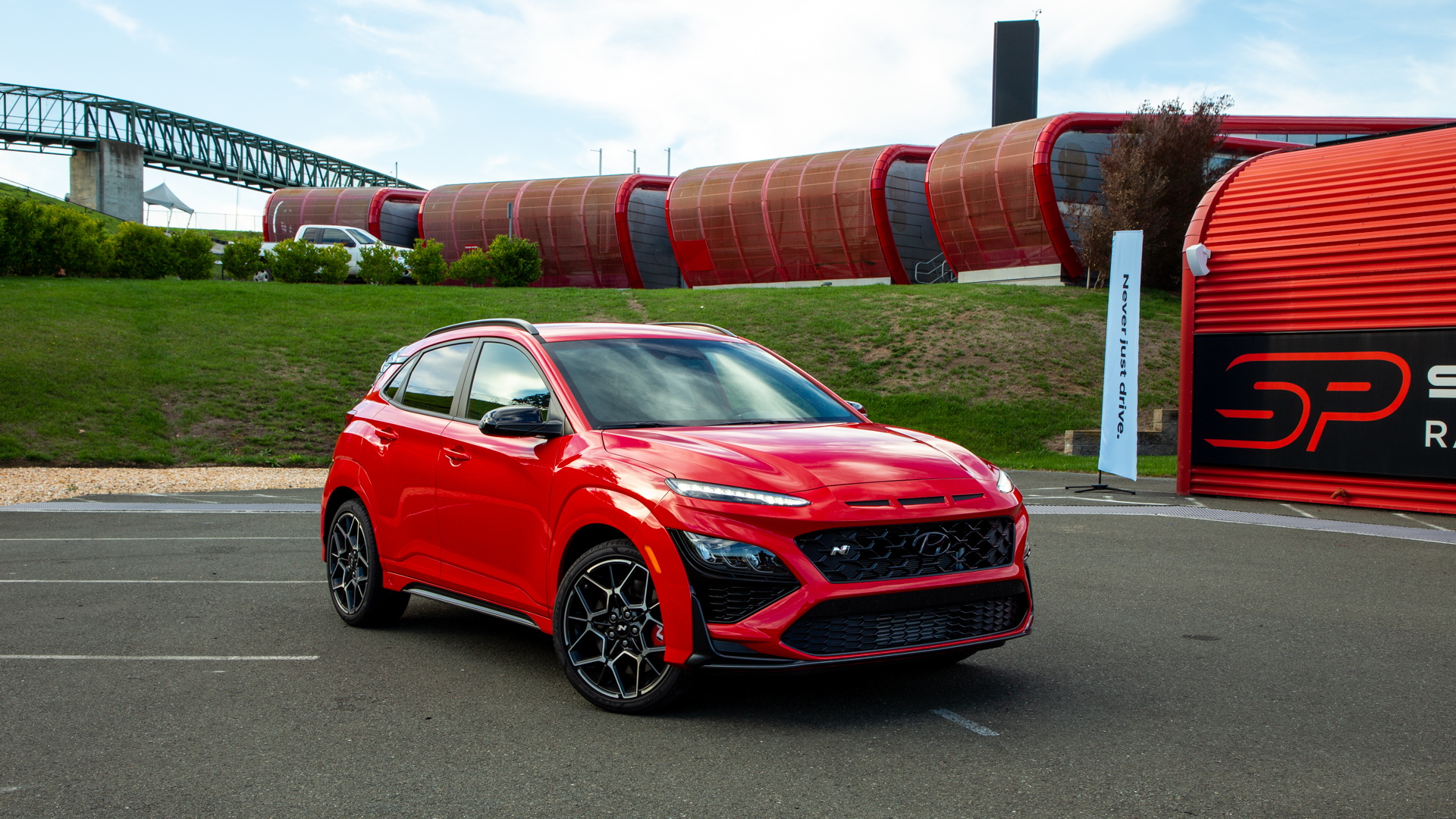 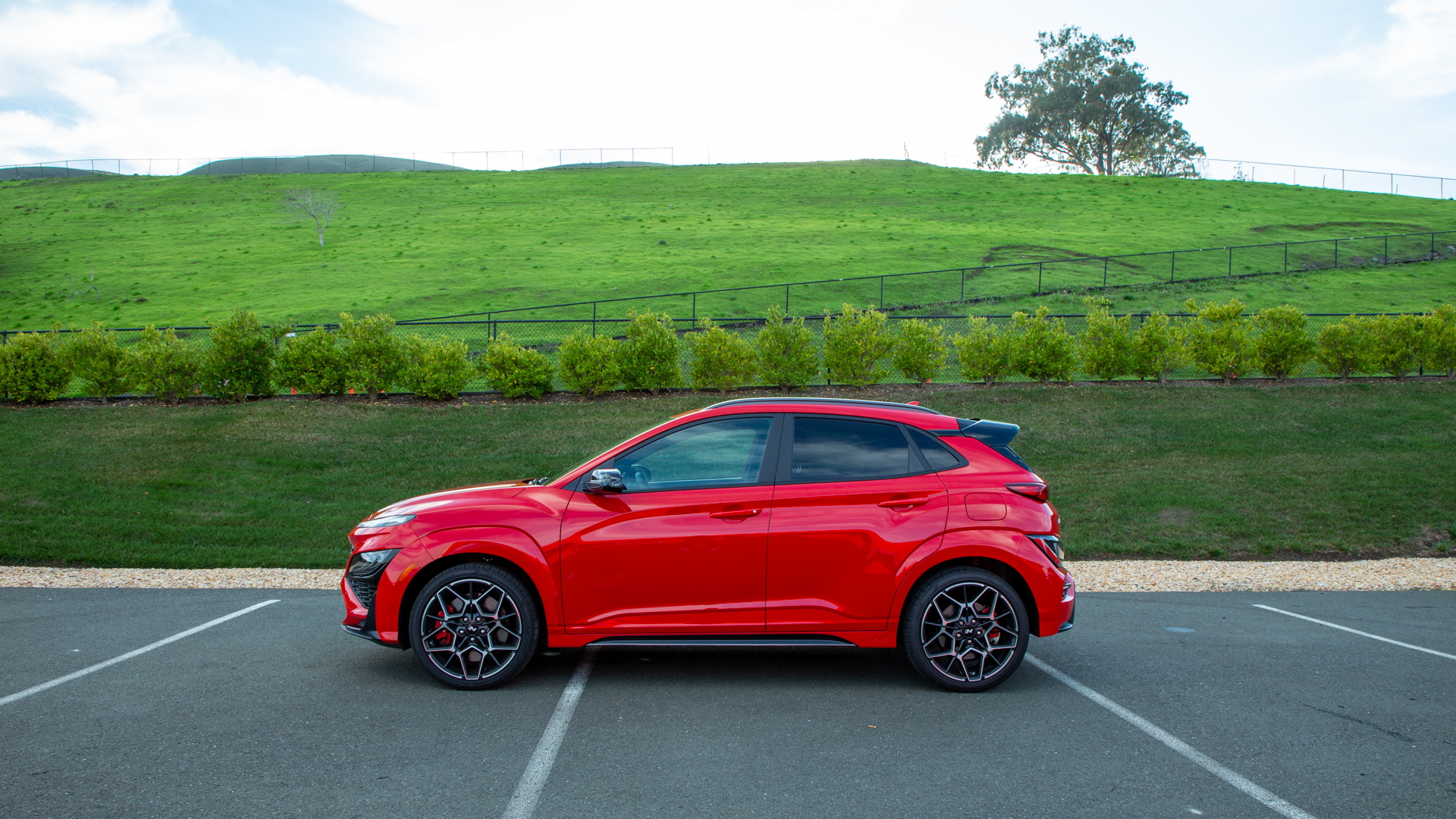 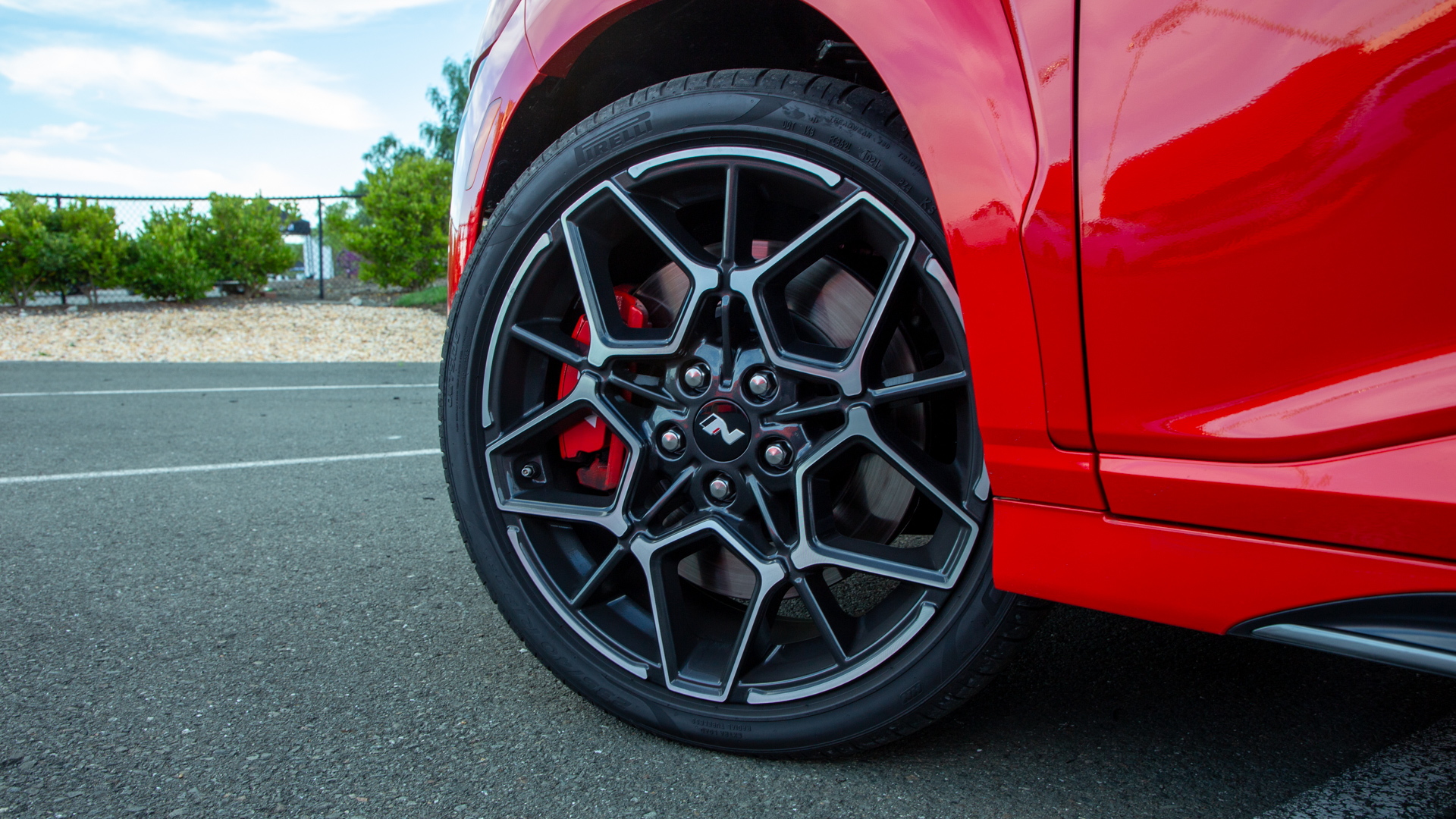 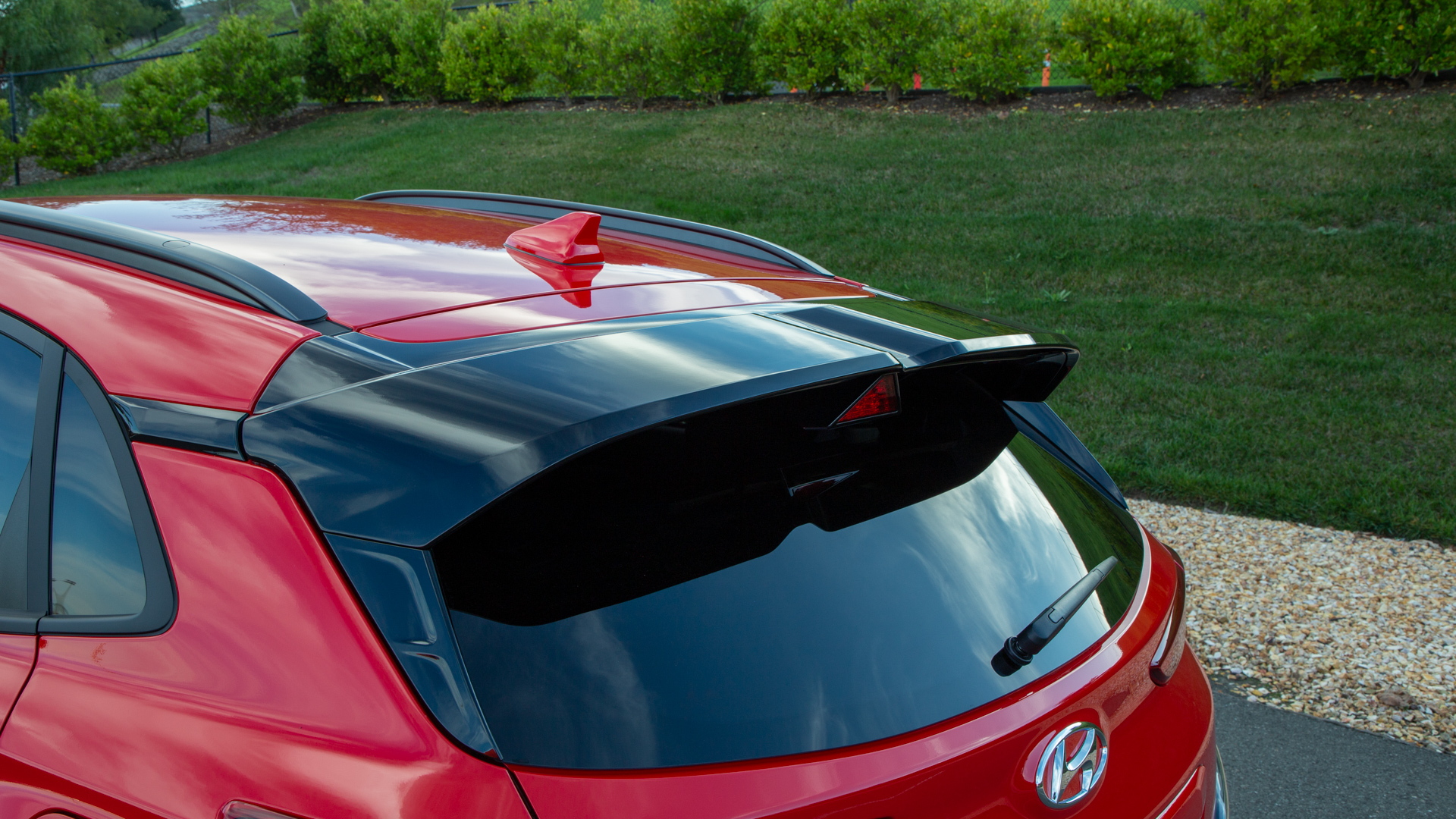 Hyundai’s N performance division has previously only turned its gaze toward passenger cars, but that changes with the introduction of the 2022 Kona N. The high-performance compact crossover debuts alongside the Elantra N and gives Hyundai a unique vehicle that doesn’t really have any true competitors.

The only other small performance crossovers are luxury models like the Mercedes-Benz AMG GLA35 or the BMW X2 M35i, but those vehicles exist in a completely different tax bracket. The Mini Countryman John Cooper Works comes closer, but it starts north of $40,000 as well. That gives the Kona N and its base price of $35,425, including a $1,225 destination charge, a market all to itself.

I traveled to Sonoma Raceway, just north of San Francisco, to put the Kona N (as well as the Elantra N) to the test on the track, an autocross, and the streets to get a complete picture of the performance crossover’s potential. Those three environments each revealed something different about the Kona N, for better or worse.

The Kona N doesn’t have the same racy looks as the Elantra N, but it sports some performance hints. A small wing spoiler sits at the top of the liftgate, red N accents decorate the nose and sides, and the rear adds a diffuser and dual exhaust tips. Hyundai also mounts 19-inch wheels with a unique design and an N logo in the middle, wrapped in Pirelli P Zero summer tires.

Power comes from the same 2.0-liter turbo-4 found in the Elantra N and the Veloster N, making the same 276 hp and 289 lb-ft of torque. Unlike the Elantra N, however, Hyundai doesn’t offer a manual; the front-wheel drive Kona N only comes with an 8-speed wet dual-clutch automatic transmission. Power can temporarily be boosted to 286-hp via the N grin-shift (NGS) button on the steering wheel, which opens up the exhaust and makes the transmission shift even more aggressively for 20 seconds. After that, it has to cool down 40 seconds before you can hit the button again.

The Kona N scoots forward confidently off the line with a hint of wheelspin carrying through the end of first and into second gear if you bury your foot in it. To control the spin, activate the launch control via the N performance screens in the multimedia system, and the Kona N will scoot from 0-60 mph in an estimated 5.2 seconds, 0.2 second off the pace of the Elantra N. The exhaust is also controllable via this screen. When dialed up, it provides a fitting soundtrack of burbles and pops. It’s a vehicle that doesn’t like to stay quiet for too long.

Despite its much taller bodystyle, the Kona N is only 44 pounds heavier than the Elantra N at 3,340 lb. That explains why the acceleration figures are so close between the two, but also why the Kona N feels very nimble for a crossover. The electronic power steering system’s motor has been moved down to the steering rack to provide better feedback and responsiveness, and just like its other N brethren the Kona N feels very dialed in through the steering wheel.

The standard electronic limited-slip differential contributes to this sense of security. The Kona N can detect when you’re cornering to send more power to the outside front wheel. The effect is pronounced on track, where you can get on the throttle earlier in long sweeping turns and feel the nose tuckdown toward the apex, which lets you carry more speed on exit.

The Kona N falls behind its sedan counterpart in suspension tuning, on both the track and the street. The Kona N isn’t as stable as the Elantra N on track, due to its shorter wheelbase, taller ride height, and older generation platform (the Elantra N is on the new K3 sedan platform, the Kona N on the SUV-B platform).

On Sonoma’s very challenging track,  the Kona N had a tendency to understeer when cresting hills, and the suspension had some trouble settling down the vehicle. It's not an issue of stiffness; I felt all of Sonoma’s pavement seams and bumpy braking zones. But it takes an extra beat to really settle the Kona N and that busyness makes a big difference on a circuit, as you can’t really roll onto the throttle until the crossover recaptures its composure. This makes the Kona N thrilling to drive on track in that dangerous, bull riding type of way. The way it wiggles underneath you as the suspension reloads and under hard braking turns your knuckles white.

Things don't get much better on the street. Though the adjustable dampers have three settings, none of them are really comfortable. The softest setting is probably what the Sport setting should be, and even in that mode the ride jostles passengers and road noise is ever-present. It’d be a tough vehicle to drive daily, especially in areas where the roads aren’t perfectly maintained.

The Kona N proved the most at home on an autocross course, where its short wheelbase, superb steering, and punchy acceleration made it an absolute blast. I am sad that the Kona N comes with the Pirelli tires, instead of the grippier Michelin Pilot Sport 4S summer tires found on the Elantra. Those would make turn-in that much sharper and give the Kona N a bit more edge.

The Kona N doesn’t offer any options other than the paint color, but comes very well equipped. It features a pair of 10.3 inch screens for the cluster and infotainment system, N sport seats, LED head and taillights, a wireless charging pad, blind-spot monitors, and active lane control (though, curiously, adaptive cruise control is missing).

As fun as piloting the 2022 Kona N can be, the fact that it won’t ever really calm down makes it hard to recommend for daily duty. It’s a hyperactive puppy that's cute and really fun for about 20 minutes, until you need to sleep or do anything else other than play with it. Then it eats your sofa.

Hyundai paid for travel, lodging, and track time for Motor Authority to bring you this firsthand report.